Accessibility links
German Doctors Say It's 'Highly Plausible' Pussy Riot Activist Was Poisoned Physicians in Berlin say that anti-Kremlin activist Pyotr Verzilov's illness does not appear to be caused by infection or disease. But they could not confirm what he was poisoned with, or by whom. 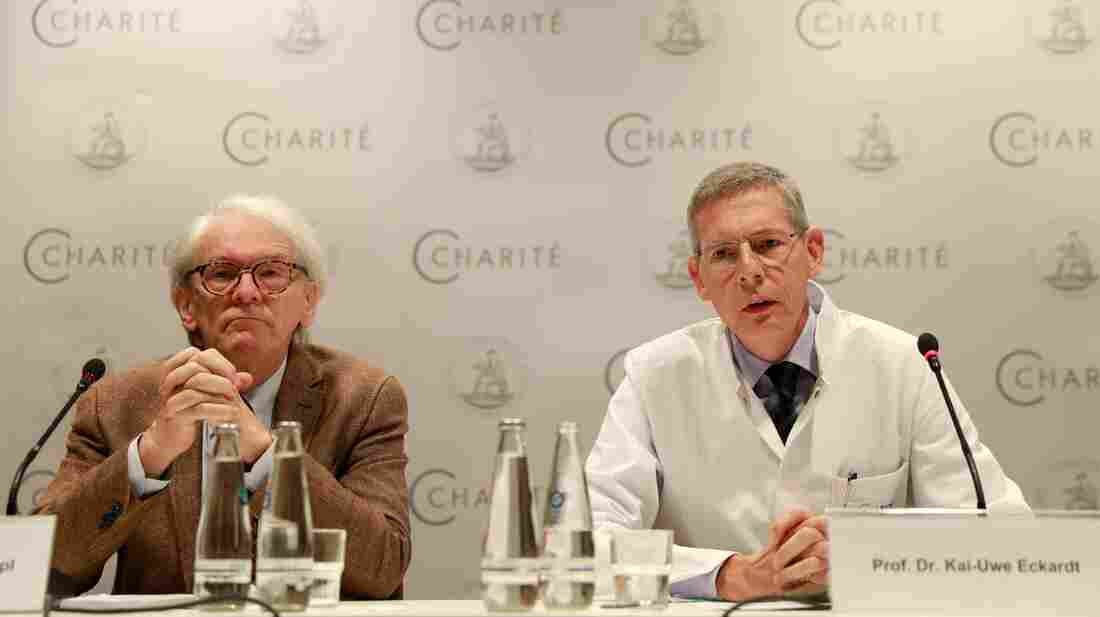 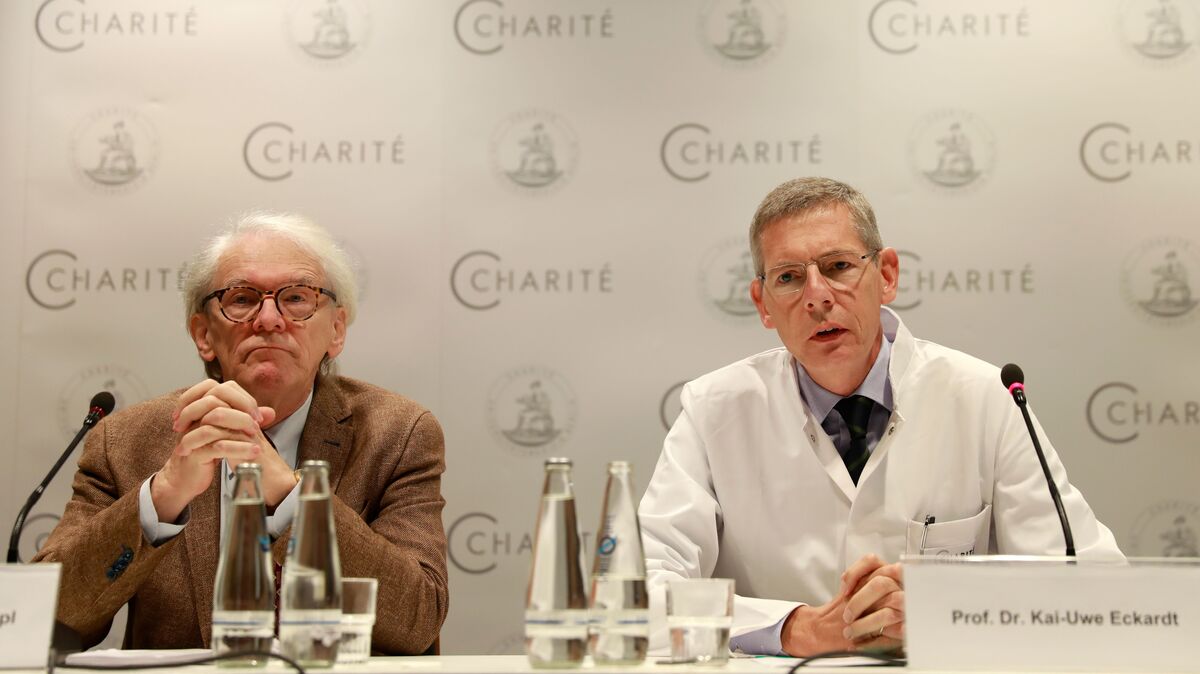 The CEO of Berlin's Charite Hospital, Karl Max Einhaeupl (left), and leading doctor Kai-Uwe Eckardt discuss the health of Pyotr Verzilov in Berlin on Tuesday. Verzilov, a member of Russian punk protest band Pussy Riot, was flown to Germany on Sept. 16 after a suspected poisoning.

Doctors at the Charité hospital in Berlin say it's "highly plausible" Pyotr Verzilov of the Russian protest band Pussy Riot was poisoned last week, although it's unclear with what or by whom. Verzilov is currently being treated in Berlin.

"We have no indication — and this is important — that this was an infection or metabolic disease," the hospital's CEO, Dr. Karl Max Einhaeupl, told reporters at a news conference in Berlin. But "we cannot say anything about the question of how this toxin got into the body. It's not for us to answer this question."

He added that while recreational drugs could cause such poisoning, it's very rare for drugs to be used that way.

The Russian government did not immediately comment on the German doctors' findings.

As NPR has previously reported, Verzilov's family and friends suspected he was poisoned after he fell ill in Moscow last week.

Verzilov, 30, is an outspoken critic of Russian President Vladimir Putin and his government.

The Russian-Canadian activist and other members of Pussy Riot served 15-day jail sentences for disrupting the World Cup finals last July by running onto the field in police uniforms to protest excessive Russian police powers.

Dr. Kai-Uwe Eckardt, who heads the Charité intensive care unit, said the substance that poisoned the activist — which could have come from pharmaceuticals or plants — attacked his nervous system, causing an anticholinergic syndrome. 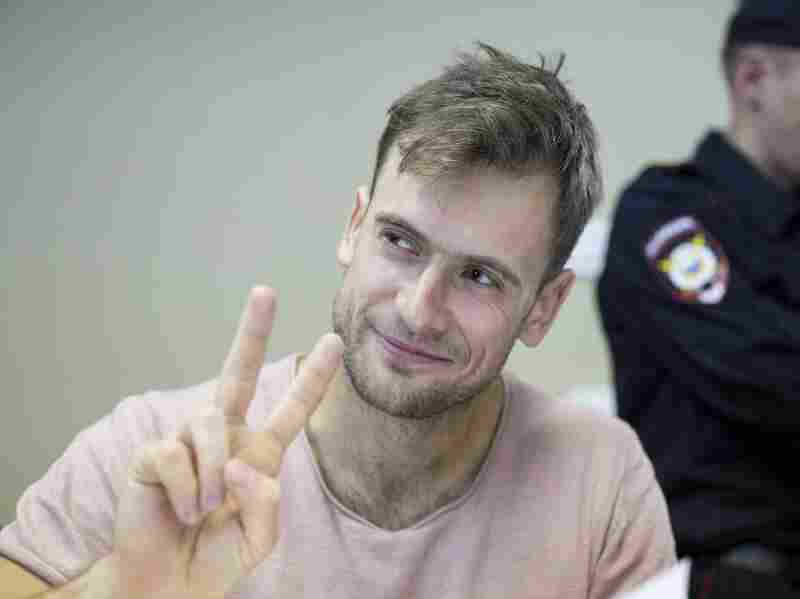 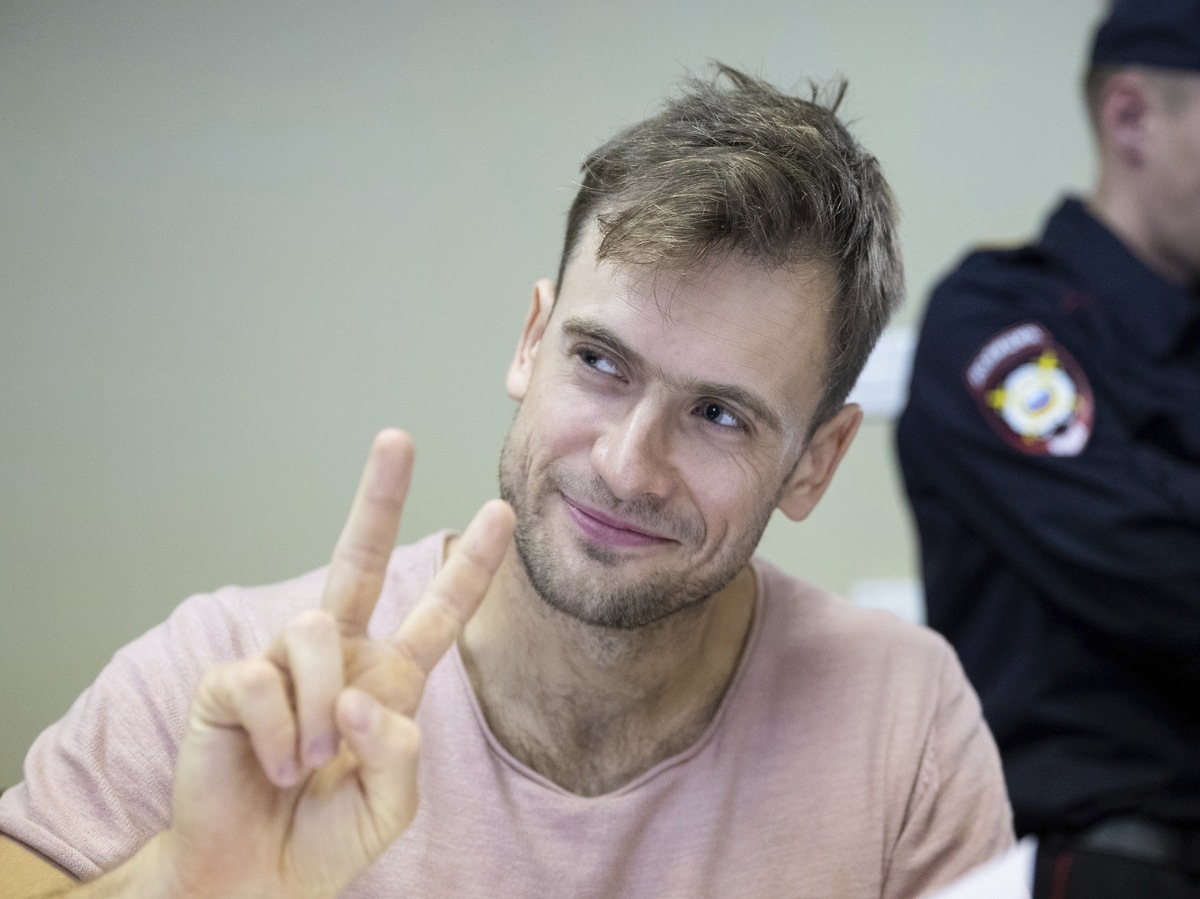 Pyotr Verzilov gestures during court hearings in Moscow on July 23.

Based on interviews with his patient's next of kin and a review of medical records from Moscow, Eckardt offered this timeline of what happened:

Verzilov fell ill on Sept. 11 in a Moscow courthouse, where he was attending a friend's hearing. He took a cab back to his apartment and his girlfriend noticed his eyes were dilated. He went to bed and she left, but when he woke up at about 6 p.m., he texted her that he was feeling worse.

She took him to a Moscow hospital, where his stomach was pumped. As his symptoms worsened, he was transferred to another hospital and on Saturday night, arrived by private medevac in the German capital.

Eckardt said tests they did on Verzilov failed to find any trace of the toxin causing his symptoms, but that it wasn't a surprise, considering that his stomach had been pumped and six days had elapsed since he first fell ill.

Verzilov is improving "day-by-day" and his condition is no longer life-threatening, Eckardt said, adding that he has gotten out of bed and talked to his doctors, although not about what happened.

In a statement emailed to NPR, Verzilov's ex-wife, Pussy Riot member Nadezhda Tolokonnikova, said he is "still disoriented and not fully with us."

"He's dizzy and confused ... he does not understand that he's in Germany, that he's in a hospital and there are doctors around him, not prison wardens," she said, "but the good news is that this particular form of amnesia is reversible."

The German doctors say Verzilov is expected to make a full recovery.