Accessibility links
Trump Says Brett Kavanaugh 'Does Not Deserve This' After a private meeting with the president of Poland, Trump conducted his first formal question-and-answer session with reporters since July, and defended his Supreme Court nominee. 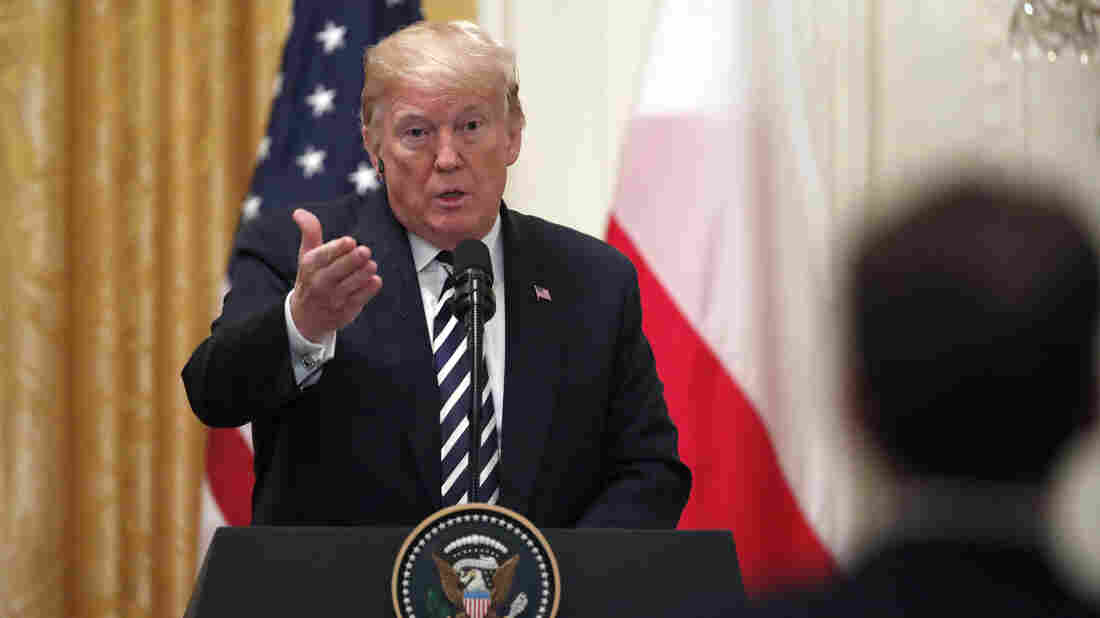 President Donald Trump gestures as he answers a reporter's question during a news conference with Polish President Andrzej Duda, in the East Room of the White House Tuesday. Alex Brandon/AP hide caption 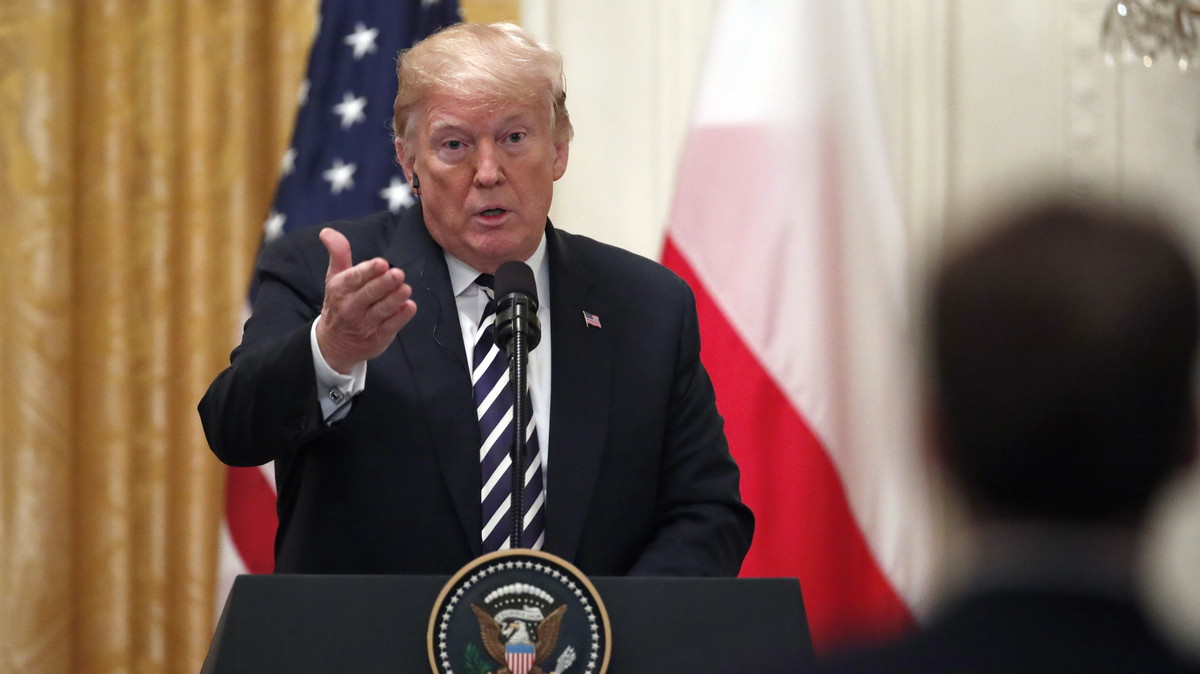 President Donald Trump gestures as he answers a reporter's question during a news conference with Polish President Andrzej Duda, in the East Room of the White House Tuesday.

President Trump issued his most forceful defense yet of his embattled Supreme Court nominee Judge Brett Kavanaugh on Tuesday.

Speaking to reporters during a press conference with Poland's president, Trump called Kavanaugh "a great man" and said that he feels "terribly" for the federal appeals court judge and his family.

Kavanaugh has been accused of sexual assault by Christine Blasey Ford, a 51-year-old California professor, who said that when they were both teenagers more than three decades ago Kavanaugh allegedly tried to grope her and take off her clothes.

The Senate Judiciary Committee has scheduled a hearing for Monday at which Kavanaugh will testify. The panel has also invited Ford, who has yet to respond to the invitation from senators.

"I feel so badly for him that he's going through this," Trump said during the joint news conference with Polish President Andrzej Duda. Trump blasted Democrats, and in particular Sen. Dianne Feinstein, D-Calif., for not raising the accusation against Kavanaugh sooner. "She had this meeting, (with Kavanaugh) why didn't she bring it up?" Trump asked.

Battle For The Senate: Candidates In Key Races Respond To Kavanaugh Allegations

Democrats have said that Ford asked for anonymity in a letter she sent to her congresswoman, Rep. Anna Eshoo, D-Calif., detailing the incident. Eshoo passed the letter to Feinstein, who turned it over to the FBI.

But Trump said he supported the additional Judiciary Committee hearing, saying "there shouldn't even be a little doubt," about Kavanaugh's nomination. "They will look at what she had to say from 36 years ago," he said, "and we will see what happens."

"Honestly, I feel terribly for him," Trump said of Kavanaugh, "for his wife, who is an incredible, lovely woman, and for his beautiful, young daughters."

Trump also spoke about trade and military matters in his press conference with the Polish leader. It was Trump's first formal question-and-answer session with reporters since July. 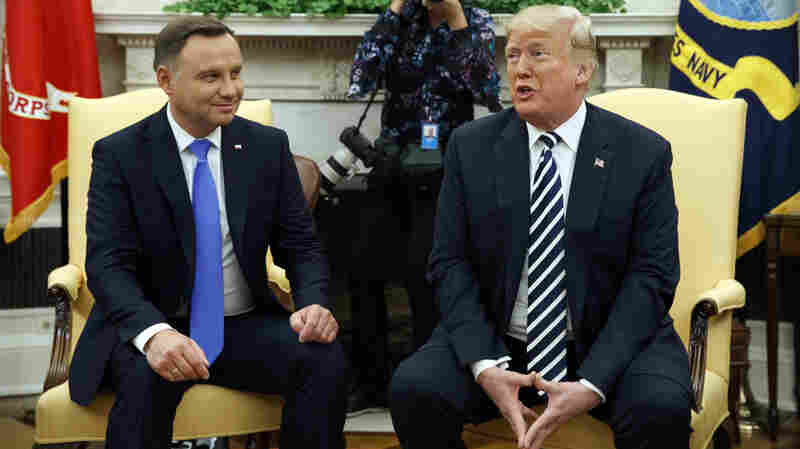 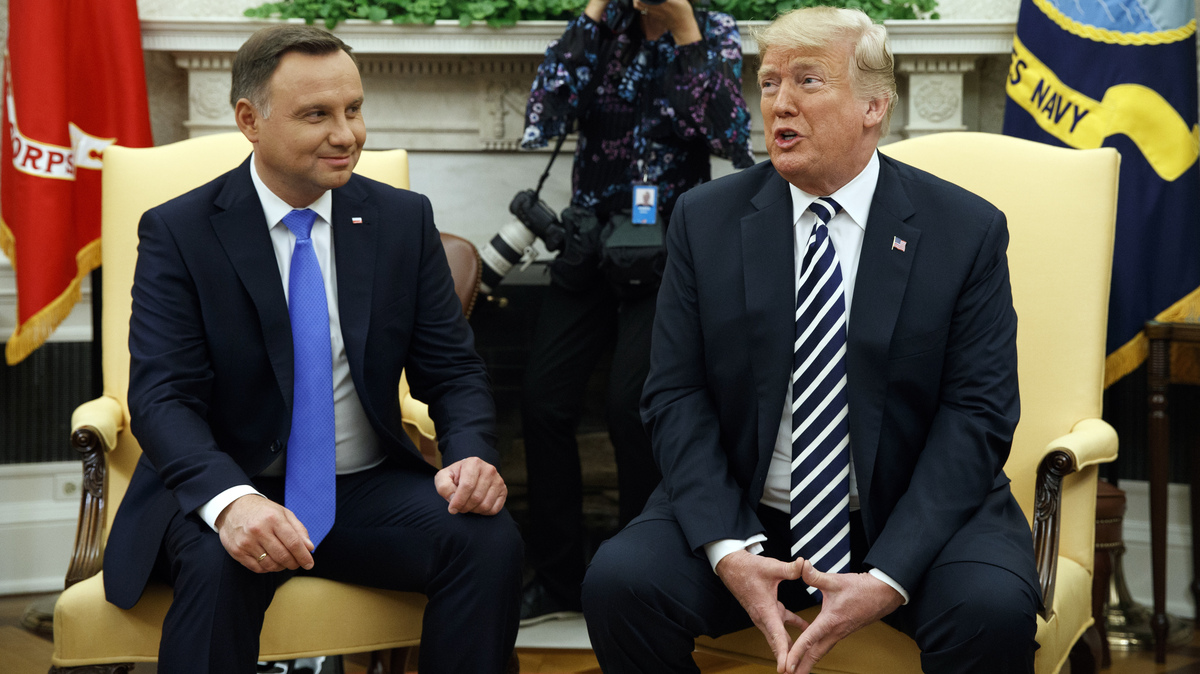 President Trump speaks to reporters before a private meeting with Polish President Andrzej Duda in the Oval Office on Tuesday.

Duda and Trump held private talks prior to the press conference Tuesday at the White House. In a photo-op earlier in the Oval Office, Trump also said he supported the planned hearing next week.

"A delay is certainly acceptable," Trump said in his Oval Office remarks. "We want to get to the bottom of everything, we want to let everybody to be able to speak up and to speak out."

The two leaders also discussed a possible U.S. military base in Poland. Trump said Poland offered "much more than $2 billion to do this, and so we're looking at it," for security reasons and for economic reasons.

Duda joked that such a facility could be called "Fort Trump."

The U.S. currently rotates troops into Poland. A former lieutenant general in the Army who commanded forces in Europe wrote in June that establishing a U.S. military base in Poland would be viewed by U.S. allies as "unnecessarily provocative." NPR's Tom reports that view was echoed Tuesday by a senior Defense Department official who questioned the notion of a permanent Polish base.