Accessibility links
Tougher Laws On Pipeline Protests Face Test In Louisiana A number of states are making it harder to protest the construction of oil and gas pipelines. Recent felony arrests in Louisiana could be a test case for these tougher new laws. 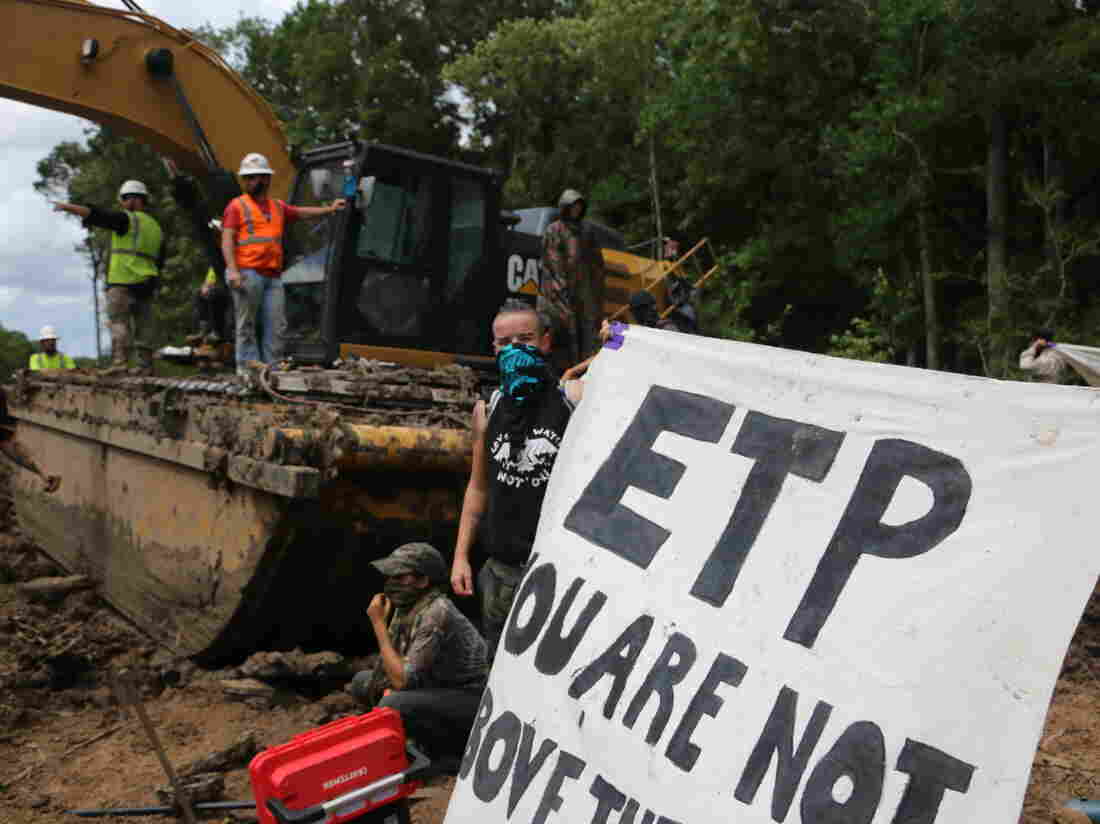 Protesters disrupt construction of the Bayou Bridge Pipeline in early September. Trespassing near pipelines is now a felony offense in Louisiana, punishable by up to five years in prison. Travis Lux/WWNO hide caption 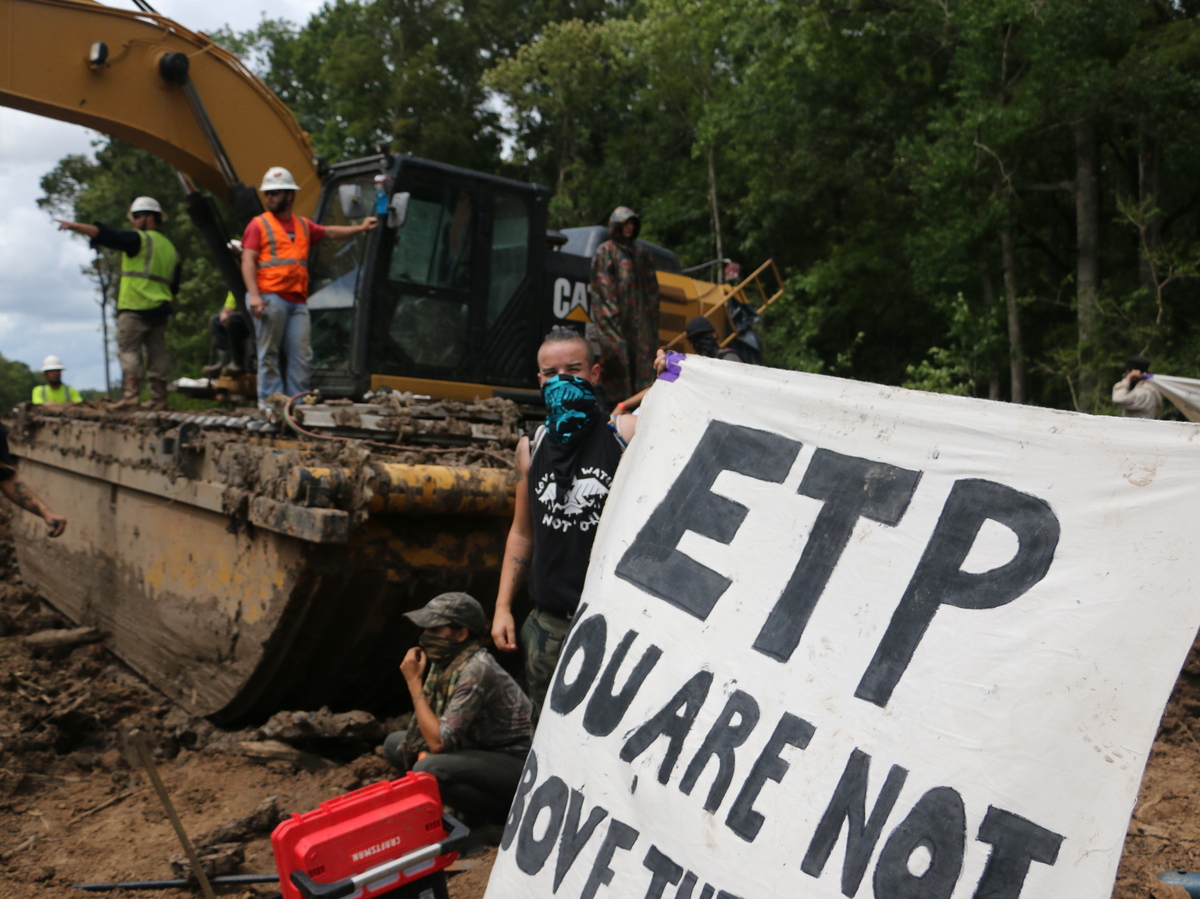 Protesters disrupt construction of the Bayou Bridge Pipeline in early September. Trespassing near pipelines is now a felony offense in Louisiana, punishable by up to five years in prison.

After a high-profile campaign to oppose the Dakota Access Pipeline in 2016, a number of states moved to make it harder to protest oil and gas projects. Now in Louisiana, the first felony arrests of protesters could be a test case of these tougher laws as opponents vow a legal challenge.

The controversy here is over the Bayou Bridge Pipeline, the last leg of the Dakota Access. If completed, it will bring crude oil from the Bakken oil fields of North Dakota, through Louisiana, where it will be exported abroad.

On a recent day, deep in the Atchafalaya swamp of South Louisiana, twigs snap under the rubber boots of about 40 protesters as they march through shaded woods. Many have tied bandannas around their faces, leaving only their eyes exposed. In the distance, backhoes fling mud as construction workers clear a path for the new Bayou Bridge Pipeline.

"Y'all are trespassing!" a construction worker shouts.

"Go home!" a protester yells back.

After a few minutes, the construction workers shut off their equipment and the protesters celebrate. But later, things get heated after the sheriff's department shows up. A deputy pins one woman to the ground, and the two sides engage in a muddy tug of war until she tumbles free.

It's incidents like this that have helped push lawmakers to take action. Earlier this year, Louisiana state Rep. Major Thibaut proposed a bill with stricter penalties for pipeline protesters.

"You know that there's a right way to do things and a wrong way," Thibaut told a state legislative committee. "And if you want to protest against something ... get your permit and you go do it in a legal fashion."

Trespassing in Louisiana is normally a misdemeanor offense. But the new law deems oil and gas pipelines to be "critical infrastructure," a classification that includes places like nuclear plants, oil refineries and water treatment facilities. As of Aug. 1, trespassing near oil and gas pipelines in the state is now a felony offense, with a possible sentence of up to five years in prison.

Several states have either passed or are considering similar laws, including Oklahoma, Iowa and Pennsylvania. 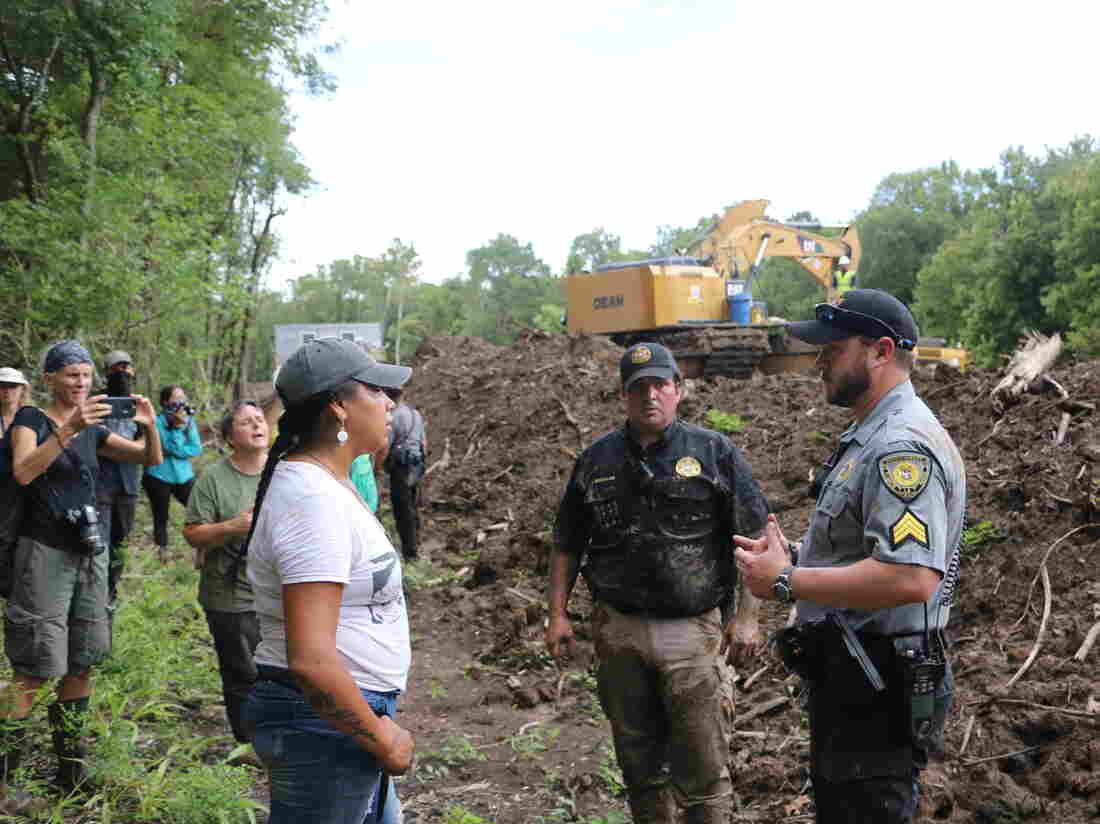 Sheriff's deputies negotiate with protesters who have disrupted construction of the Bayou Bridge Pipeline. No arrests were made on this day, but at least 10 protesters could face felony charges. Travis Lux/WWNO hide caption 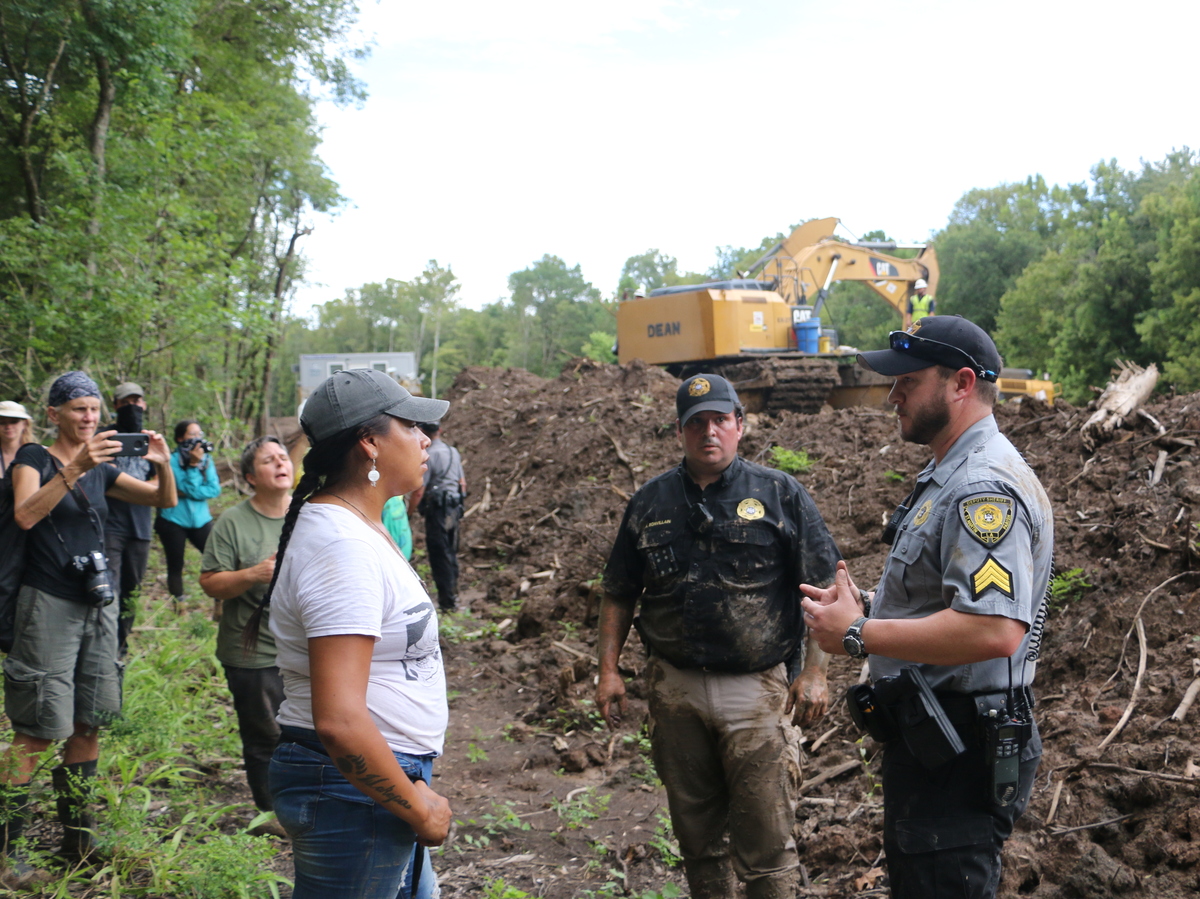 Sheriff's deputies negotiate with protesters who have disrupted construction of the Bayou Bridge Pipeline. No arrests were made on this day, but at least 10 protesters could face felony charges.

The oil and gas industry is a big part of many states' economies, including Louisiana. Craig Stevens, who represents pipeline interests with Grow America's Infrastructure Now, says these new laws will help ensure pipelines are not delayed and will also help keep both workers and protesters safe.

"It wasn't too long ago when there were, I think, four protesters that broke through and tried to penetrate, and actually did pierce a pipeline up in the Midwest," he says. "And they used blowtorches. I mean that's the type of thing could actually explode and kill somebody."

There were two such cases, and in both the pipelines were empty at the time.

Those arrested said they didn't think they were doing anything illegal since they were on water, which is considered public property.

"It's a ridiculous over-criminalization of people who protest," says Bill Quigley, a law professor at Loyola University in New Orleans who represents protesters here and in other states.

Quigley calls the new law unconstitutional on First Amendment grounds, and he says he plans to challenge it in court. He hopes doing so will encourage other states to walk back their own laws.

So far, it's not clear whether the local district attorney will prosecute those charged with felonies. But at the Bayou Bridge protest, anti-pipeline organizer Cherri Foytlin says she and others won't be deterred.

"I hope to God no more felonies," she says. "But if there is, then they will be righteous ones."

The next day, Foytlin and three others were also arrested.

In the audio, as in a previous Web version of this story, Karen Savage is described as a journalist-activist. We should have simply referred to her as a journalist.

Previously posted on Sept. 19: In the audio, as in a previous Web version, we say that those convicted under the new felony trespassing law could face time in jail. The sentence would actually be time in prison. Also, the story has been edited to clarify that the pipelines pierced by protesters were empty at the time they were damaged.