Accessibility links
Investigative Journalist Aims To Expose Ills Of Privately Run Prisons American Prison is the remarkable story of a journalist who spent four months working as a corrections officer — and a horrifying exposé of how prisoners are treated by a profiting corporation. 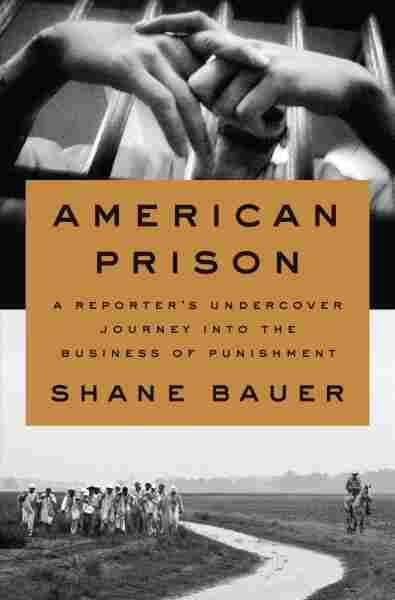 A Reporter's Undercover Journey into the Business of Punishment

Americans like to think of our country as the land of the free — but that's not the case for everyone: More than 2 million Americans are in jails or prisons in the U.S.

It can be tough to know what goes on behind prison walls — and private corrections companies are especially reluctant to open up to outsiders. So journalist Shane Bauer, a reporter for Mother Jones magazine, decided the only way to find out what life inside a private prison was like was to get a job at one. American Prison is both the remarkable story of a journalist who spent four months working as a corrections officer, and a horrifying exposé of how prisoners were treated by a corporation that profited from them.

In 2014, Bauer applied for a job with the Corrections Corporation of America (CCA), which has since rebranded itself as CoreCivic. The second-biggest private prison company in America, CCA operates nearly 100 correctional facilities across the country. A quick Google search of Bauer's name would have revealed that he was an investigative reporter, but CCA either didn't know or didn't care; he was hired quickly to be a prison guard at Winn Correctional Center in northern Louisiana.

Bauer writes that he first got hint of a problem almost immediately after he started the training program for his new job. One instructor he encounters tells the cadets not to bother trying to break up a fight between prisoners, because the guards aren't getting paid enough for that: "So if them fools want to cut each other, well, happy cutting." The instructor also reassures the guards in training that he'll have their backs no matter what they do: "If you are an officer and you do something one hundred percent wrong, I'm going to take your side right on the spot."

Although he finds his new job more difficult than he'd hoped, Bauer continues to show up for work — armed with a hidden camera and audio recorder. Initially reluctant to flaunt his authority, he begins to get used to being able to order people around: "I stand tall, broaden my shoulders, and stride up and down the floor, making enough eye contact with people to show I'm not intimidated but not holding it long enough to threaten them. I tell inmates to take their hats off as they enter. They listen to me, and a part of me likes that."

He also begins to believe that the prison companies have no interest in trying to rehabilitate the incarcerated, or even treat them like real people. One assistant warden makes clear to the prison employees that he considers the prisoners to be little more than livestock: "We want them institutionalized, not individualized. ... We don't want them to feel as though they are individuals. We want them, for lack of a better term, to feel like a herd of cattle."

Bauer intersperses the chapters about his time at Winn with ones chronicling the history of convict servitude and private prisons in the U.S. CCA co-founder Terrell Don Hutto, Bauer writes, is responsible for merely "the latest chapter of a story that goes back to the foundation of this country, wherein white people continue to reinvent ways to cash in on captive human beings." Bauer's insights into what some call the "prison-industrial complex" are fascinating, and the history he provides offers crucial context into his time working at a CCA facility.

It's Bauer's investigative chops, though, that make American Prison so essential. He dedicated his time at Winn to talking with prisoners and guards, who were unaware that he was a journalist. Bauer refers to most of the Winn employees and prisoners with pseudonyms, in an effort to protect them from retribution, although a few people did grant him permission to use their real names. Based on his first-hand experience and these conversations, he paints a damning picture of prisoner mistreatment and under-staffing at the prison, where morale among the incarcerated and the employees was poor. The stories he tells are deeply sad and consistently infuriating.

Such mistreatment, Bauer contends, isn't isolated to Winn; he writes that "multiple government reports ... have found CCA prisons to be more dangerous and more understaffed than public prisons," and says that after an article he wrote about Winn for Mother Jones was published, "staff from CCA prisons around the country complained of similar issues."

Bauer is himself a former prisoner; he was one of three hikers arrested by border guards in Iran in 2009. He spent more than two years in jail there. He lets his experience inform his writing, bringing valuable perspective to the book, and he writes elegantly about the internal struggle that he experienced while working as a guard at Winn.

American Prison is an enraging, necessary look at the private prison system, and a convincing clarion call for prison reform. Bauer urges his readers to consider the human costs of our broken prison system, which he calls "surely a national disaster."