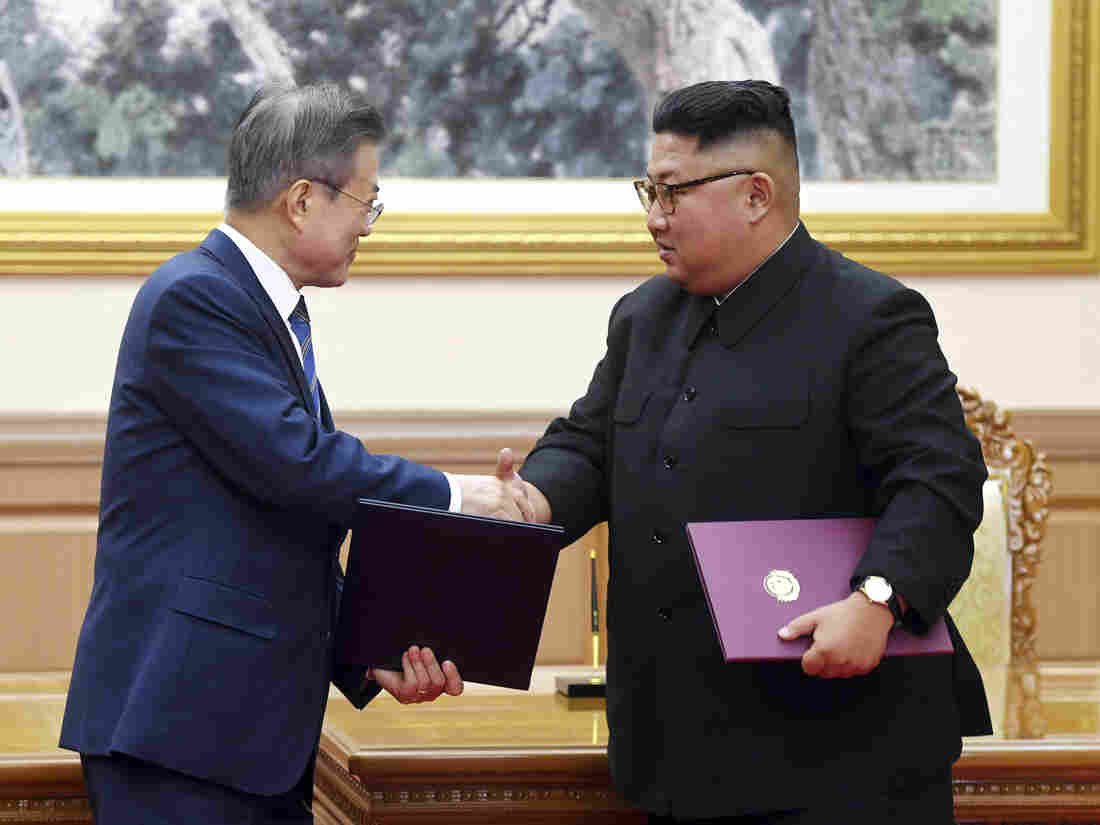 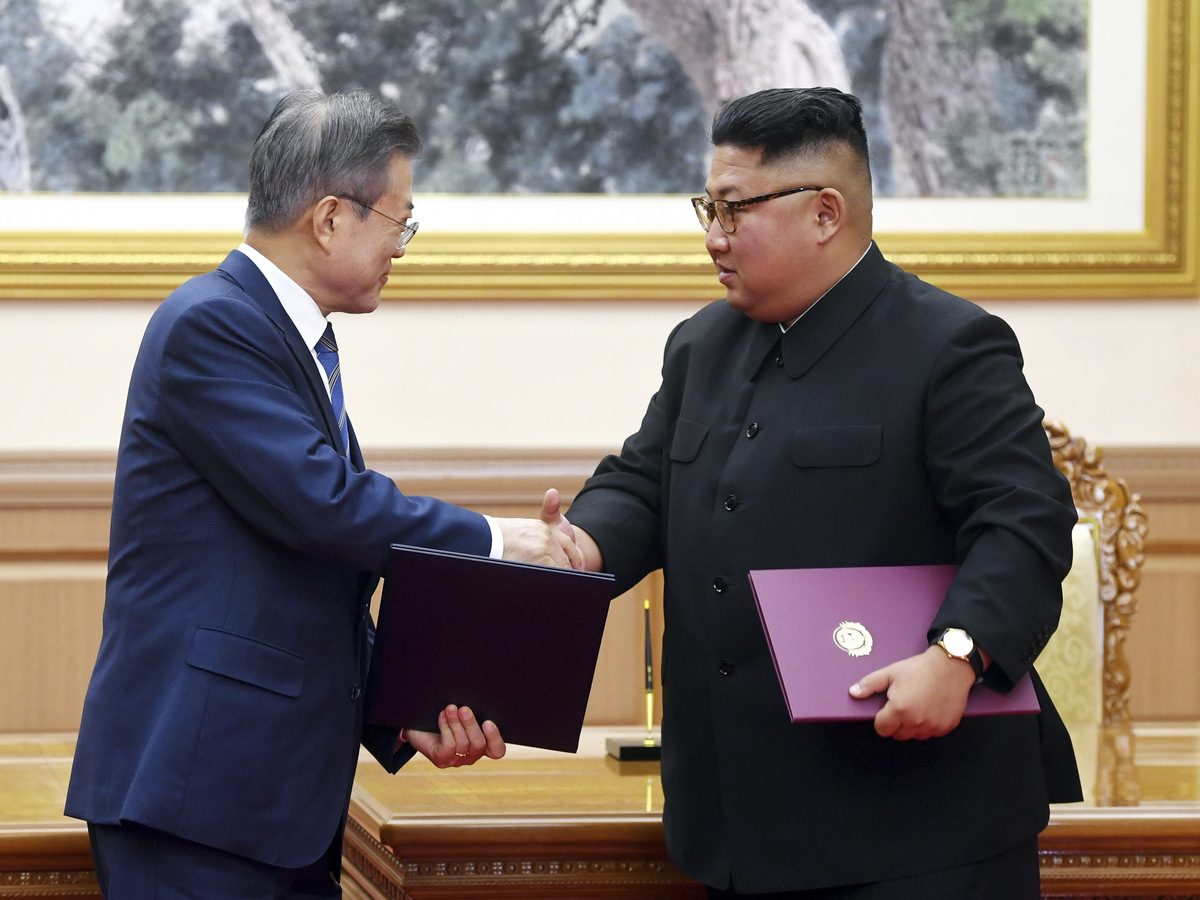 North Korean leader Kim Jong Un says he will visit Seoul "in the near future," amid an ongoing summit with South Korea's Moon Jae-in in which he also renewed pledges to shut down a primary missile launch site and a key nuclear weapons complex if the U.S. takes "corresponding" measures.

Kim's remarks about traveling to Seoul were made during a news conference in Pyongyang with the South Korean president. It would be the first-ever visit to the South Korean capital by a North Korean head of state.

In their third summit, Kim and Moon also laid out plans to draw down forces along their heavily fortified border and announced an agreement for their athletes to compete as a single team at the 2020 Olympics in Tokyo and to submit a joint bid to host the games in 2032.

In addition, the two leaders agreed that before the end of the year, they would participate in groundbreaking ceremonies to link railways along the east and west coasts of the Korean peninsula.

Moon said that the two sides agreed that the Koreas should become a "land of peace without nuclear weapons and nuclear threats." Kim called the agreement "a leap forward" toward peace between the two historically bitter rivals.

In A Break From Recent Precedent, North Korean Anniversary Parade Features No ICBMs

In it, defense chiefs from Pyongyang and Seoul said they would establish "buffer zones" between their land and maritime borders to reduce the possibility of accidental military clashes. They also agreed to withdraw 11 guard posts from the Demilitarized Zone along the 38th parallel that acts as the de facto border between the two sides, who remain technically at war more than six decades after the Korean conflict ended without a peace treaty.

North Korea would also shut down its Dongchang-ri missile engine testing and launch facility and allow the process to be monitored by international observers.

The North promised to dismantle its Yongbyon nuclear weapons facility as far back as 2007 and the significance of shuttering the two facilities is not clear. The North has demonstrated a capability for using mobile launchers to fire its ballistic missiles and some observers believe Pyongyang maintains secret nuclear facilities in addition to Yongbyon.

Although it was not clear what "corresponding" U.S. steps North Korea expected as a condition to make good on the promise to shut down Yongbyon, President Trump, in a tweet just after midnight, appeared to deem the summit a success, calling it "Very exciting!"

Kim Jong Un has agreed to allow Nuclear inspections, subject to final negotiations, and to permanently dismantle a test site and launch pad in the presence of international experts. In the meantime there will be no Rocket or Nuclear testing. Hero remains to continue being........

....returned home to the United States. Also, North and South Korea will file a joint bid to host the 2032 Olympics. Very exciting!

Even so, lasting rapprochement between the two Koreas has proved elusive in the past, with hopes for peace degenerating into renewed recriminations and saber rattling following two previous summits in 2000 and 2007.

Although Trump has remained optimistic about improved relations between Washington and Pyongyang, the initial euphoria following the Singapore summit in June — after which the president declared that North Korea was "no longer a nuclear threat" — quickly wore off. Follow-up meetings between Secretary of State Mike Pompeo and North Korean officials failed to produce concrete results, and Pyongyang quickly returned to its bombastic anti-American rhetoric.

As The Associated Press notes of the agreement, "... while containing several tantalizing offers, it appears to fall short of the major steps many in Washington had been looking for — such as a commitment by Pyongyang to provide a list of the North's nuclear facilities, a solid step-by-step timeline or an agreement to allow international inspectors in to assess progress or discover violations."

Moon on Wednesday acknowledged, "there will be challenges and trials, but the more we overcome them the stronger we will become."

"We are not afraid of future challenges," he said.

Harry Kazianis, director of defense studies at the Center for the National Interest in Washington, tells NPR that keeping the lines of communication open between North and South is paramount.

"If we are going to have change in the Korean Peninsula, if we're not going to have a war, you need to have some sort of political framework where all sides will keep talking," Kazianis says.

In a reference to some of Trump's harshest threats against the North before tensions finally eased, Kazianis says as long as dialogue continues, "if there are rough patches, if there are problems, we can talk our way through and not go back to fire and fury."