Accessibility links
Doctor, Girlfriend Charged With Drugging, Raping Women; Hundreds Of Victims Possible Grant Robicheaux, 38, is an orthopedic surgeon who appeared on a 2014 reality TV show. Prosecutors say videos found on his phone show the apparent assaults of many women too intoxicated to consent. 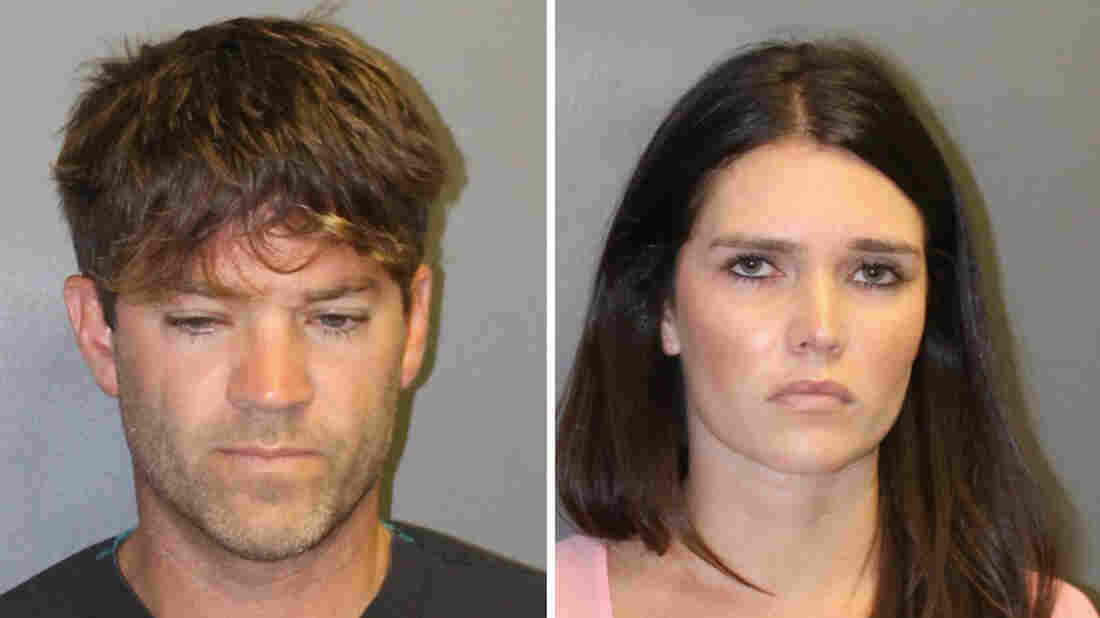 Grant Robicheaux and Cerissa Riley have been arrested and charged with rape and assault. Authorities say there may be hundreds of victims based on the video footage they have examined. Orange County District Attorney's Office hide caption 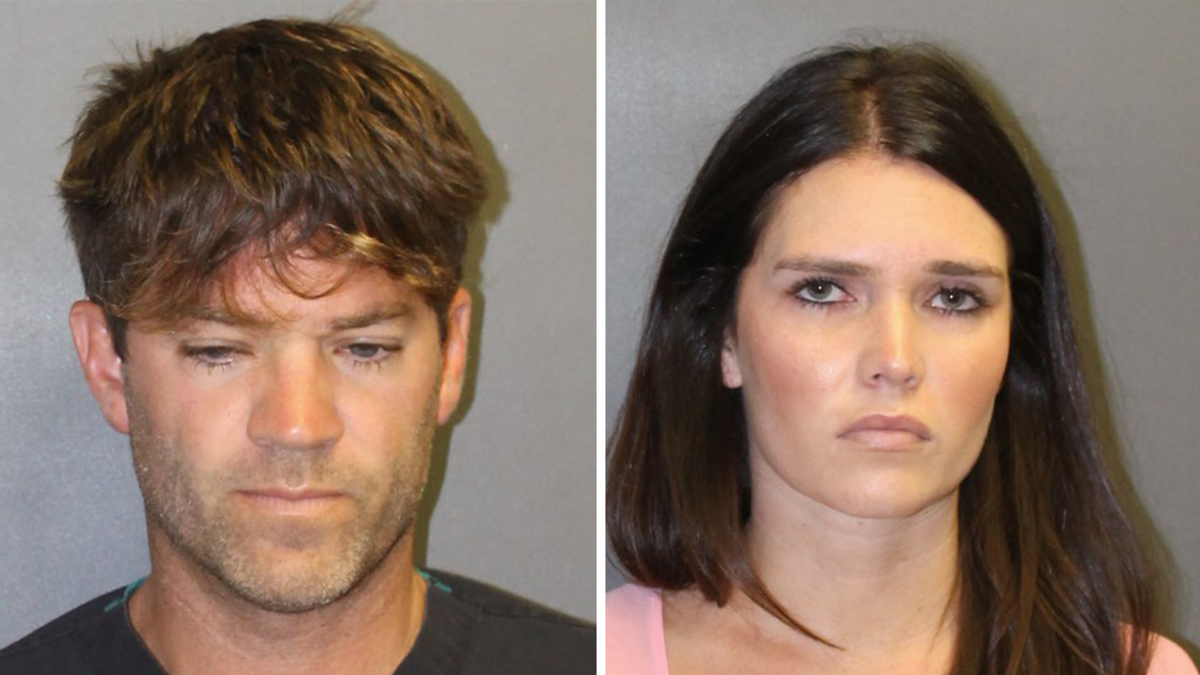 Grant Robicheaux and Cerissa Riley have been arrested and charged with rape and assault. Authorities say there may be hundreds of victims based on the video footage they have examined.

A California doctor and his girlfriend have been charged with drugging and then sexually assaulting two women – and video evidence suggests there could be hundreds of other women who may not realize they were victims.

Grant Robicheaux, 38, is an orthopedic surgeon in Newport Beach, Calif. In April 2014, he appeared on an episode of the short-lived Bravo reality show Online Dating Rituals of the American Male. Before that, Orange Coast Magazine named him a 2013 bachelor of the year.

Orange County prosecutors say that Robicheaux and his girlfriend, 31-year-old Cerissa Riley, used charm and good looks to disarm women, get them intoxicated, and then rape them at Robicheaux's apartment. Robicheaux and Riley deny the allegations.

The two were arrested and charged last week with multiple felonies: rape by use of drugs, oral copulation by anesthesia or controlled substance, assault with intent to commit sexual offense, and possession of a controlled substance for sale. Robicheaux is also charged with possessing assault weapons.

The defendants have been released on bail after each paid $100,000. If convicted, Robicheaux faces up to 40 years in prison, and Riley up to 30 years and eight months.

Disturbing videos and photos found on Robicheaux's phone suggests that there could be as many as a thousand victims who were drugged and assaulted by the defendants.

She said that although items were seized from Robicheaux's home in January, the defendants weren't charged until last week because investigators needed time to go through huge amounts of video evidence.

"There are thousands and thousands of videos and images on Robicheaux's phone, many also including Riley, which we are now meticulously going through," Rackauckas said.

"There are several videos where the women in the videos appear to be highly intoxicated, beyond the ability to consent or resist, and they're barely responsive to the defendants' sexual advances. Based on this evidence, we believe that there might be many unidentified victims out there."

Prosecutors outlined two incidents of alleged assault by Robicheaux and Riley that were reported to police.

The first occurred in April 2016. Prosecutors say that Robicheaux and Riley met a woman they call Jane Doe 1 at a Newport Beach restaurant. They invited her to a boat party, and once she was intoxicated, they took her to Robicheaux's apartment, authorities say. The two allegedly raped Jane Doe 1 while she was under the influence of drugs they had supplied to her. Jane Doe 1 contacted the Newport Beach Police Department the next day and underwent a forensic exam that tested positive for multiple controlled substances.

Prosecutors say the second assault was in October 2016, when Robicheaux and Riley are accused of drinking with a victim called Jane Doe 2 at a Newport Beach bar until she was unconscious. The defendants allegedly took her to Robicheaux's apartment and sexually assaulted her with the intent to commit rape. The woman awoke and screamed, causing a neighbor to call the police.

The Washington Post notes that on the Bravo show where Robicheaux appeared, the woman he goes on a date with felt something was weird and "too perfect" about the surgeon, and said "there might be some dark skeletons in that closet."

Attorneys for the defendants said their clients deny the allegations.

"They have been aware of these accusations for a number of months and each of them will formally deny the truth of these allegations at their first opportunity in court," Philip Cohen and Scott Borthwick, attorneys for the defendants, said in a joint statement to media outlets. "Dr. Robicheaux and Ms. Riley believe that such allegations do a disservice to, and dangerously undermine, the true victims of sexual assault, and they are eager to have the proper spotlight shed on this case in a public trial."

During the press conference, the district attorney played a few video clips: one where the Robicheaux is wearing a white coat in a doctor's office, discussing knee injuries, then clips from the reality show displaying awkward dynamics between Robicheaux, his then-roommates and the woman he was on a date with. One video shows a clip from Riley's YouTube channel, in which she talks about pursuing a teaching credential in physical education.

Prosecutors showed photos of the defendants posing for photos together and said they attended multiple festivals since 2015, including Burning Man in Nevada and Dirtybird Campout and Splash House in California.

The district attorney called for other women who may have been the victims of the defendants to contact his office, even if they aren't certain a crime was committed against them.

Van Der Linden, the district attorney's office spokesperson, told NPR that the office has been "very busy" with calls since Tuesday's press conference, including some from possible victims.

During the press conference, Rackauckas urged victims not to blame themselves.

"[Victims] may feel there's no crime to report because they normally drank alcohol or consumed substances with the defendants," Rackauckas said. "But you need to hear this: your conscious decision to party with these defendants or anybody using alcohol or other intoxicating substances does not give them a pass to rape, assault, or have sex with you once you're past the point of consent. To do so is a crime."

He said that in at least one of the incidents, Riley approached the victim, then introduced her to Robicheaux and they invited her to a party. "We tend to trust doctors, who take an oath to do no harm. The second defendant being a female was key. A woman purporting to be his girlfriend clearly played a significant role in disarming the victims and making them feel comfortable and safe."

"We've all heard of a wolf dressed up in sheep's clothing," he added. "Well, a wolf can wear scrubs or doctor's clothing or a wolf can be a beautiful woman."

An earlier version of this story misspelled Grant Robicheaux's last name as Robichaux.