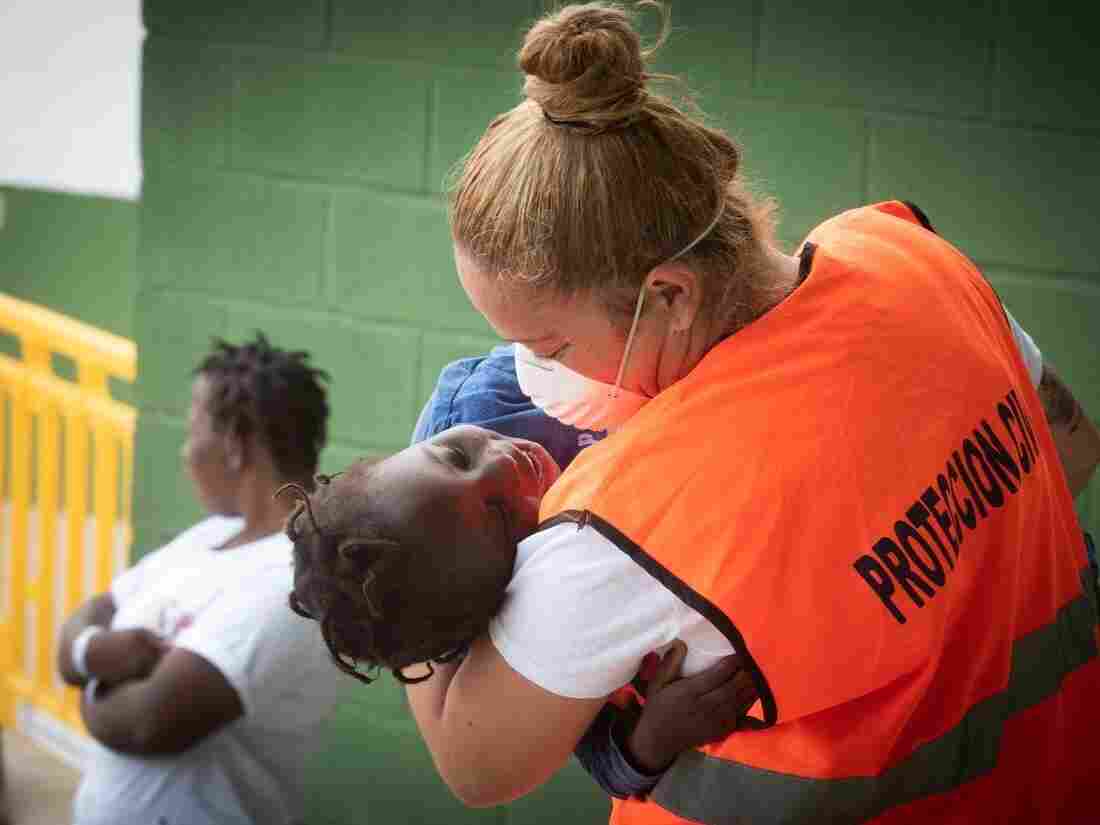 A Spanish government relief worker plays with a young migrant child at a sports center in San Roque, southern Spain, after the child was rescued by Spain's Maritime Rescue Service in the Strait of Gibraltar on Aug. 1. Marcos Moreno/AP hide caption 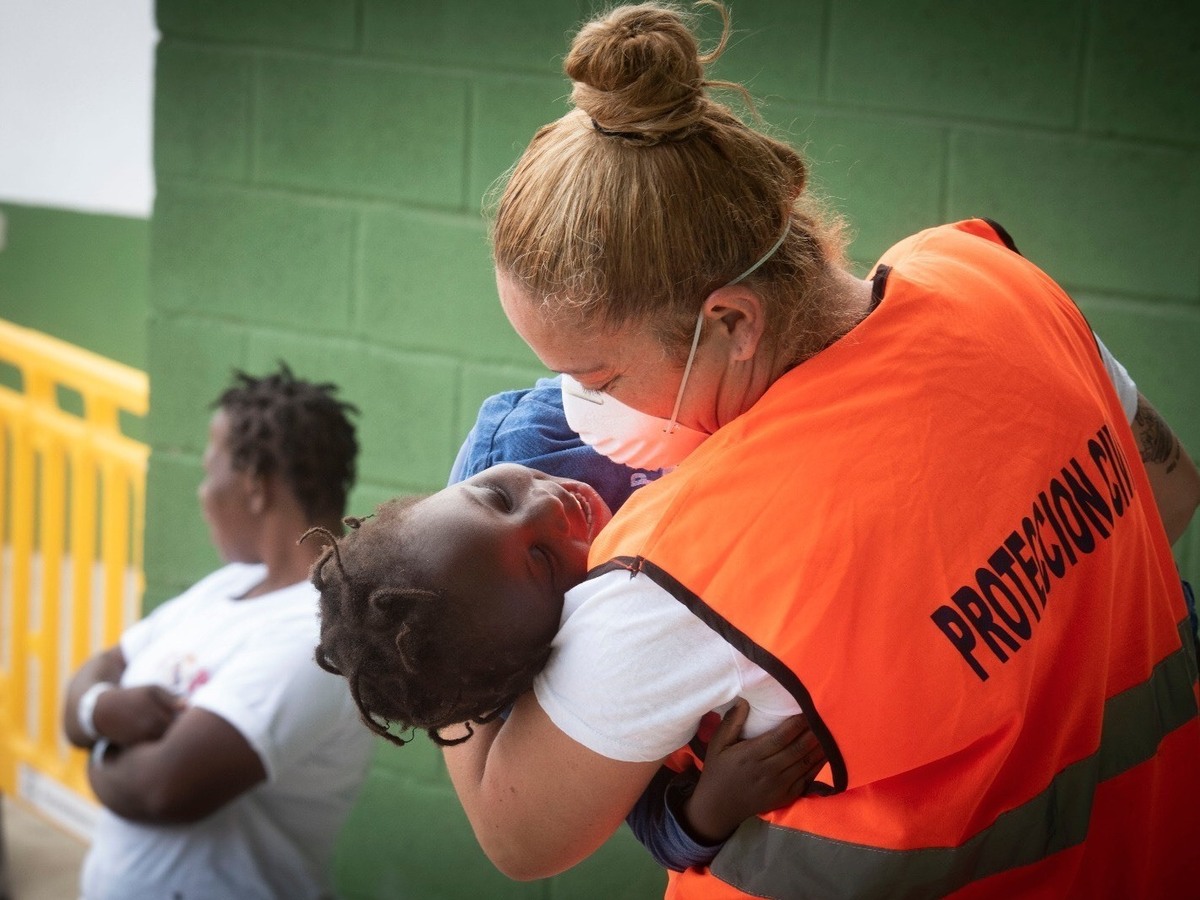 A Spanish government relief worker plays with a young migrant child at a sports center in San Roque, southern Spain, after the child was rescued by Spain's Maritime Rescue Service in the Strait of Gibraltar on Aug. 1.

A center run by the nonprofit Spanish Commission for Refugees in Málaga has been busy all summer. It's a colorful, two-story building with an outdoor courtyard, and people constantly come and go, speaking an array of languages and blasting music from their phones.

About a dozen people walk in wearing matching black hoodies and sweatpants given to them by the Red Cross. They came from one of a number of ships docking here earlier that week.

This summer, Spain became the main entry point for migrants crossing into Europe. As of early September, more than 35,000 people crossed into the country either by land or sea, surpassing other leading entry points and topping Spain's own total for all of 2017, according to the United Nations' International Organization for Migration.

While migration routes to Italy and Greece have been busy for years, Spain is now receiving twice as many migrants as Greece and six times as many as Italy. The routes are constantly in flux, but academics believe this shift could be partly due to Italy essentially closing off the central Mediterranean route — first by making a deal with Libya to intercept migrants, then by detaining rescue vessels in the area, and lastly by closing off its ports.

Most of the arrivals in Spain are taking place in the southern region of Andalusia, where the crossing from Morocco is much shorter. The majority of the migrants, however, are brought to port by Spain's maritime rescue service that intercepts boats in the Mediterranean Sea. Rarely do migrants actually reach Spanish shores themselves — their rubber boats aren't equipped to make such a voyage. According to the International Organization for Migration, the migrants come mostly from Mali, Guinea, Ivory Coast and Gambia.

When a boat of migrants reaches Spain, they're first taken to the police station to be identified and, if they choose to seek asylum, begin that process. The Red Cross is always on-site, providing clothing, food and any other kind of necessary aid. After the migrants have been identified — which can take up to 72 hours — they're taken to refugee centers run by various NGOs. 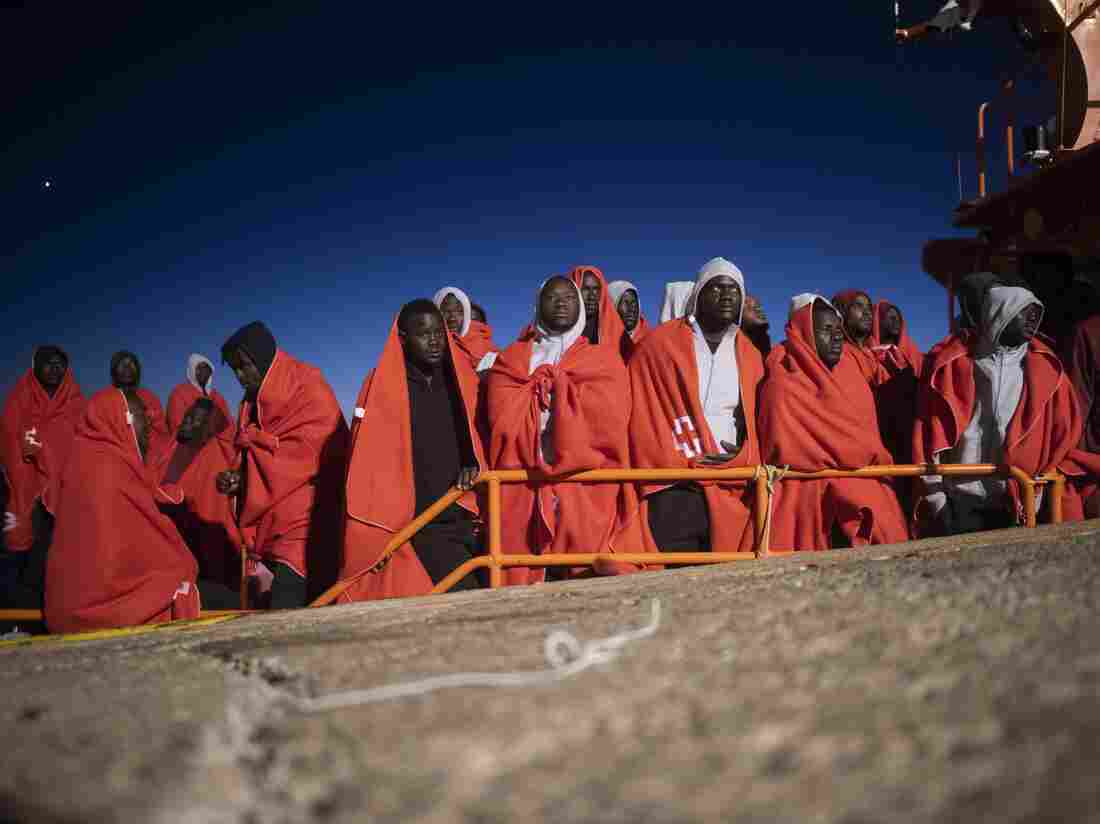 Migrants rest onboard Spain's Arcturus Maritime Rescue Service boat at the port of Tarifa, southern Spain, after being rescued in the Strait of Gibraltar. Thousands of migrants largely from African countries have boated to Spain from Morocco this year. Marcos Moreno/AP hide caption Migrants rest onboard Spain's Arcturus Maritime Rescue Service boat at the port of Tarifa, southern Spain, after being rescued in the Strait of Gibraltar. Thousands of migrants largely from African countries have boated to Spain from Morocco this year.

"Spain has improvised things this summer," says Cansino, who adds that the number of arrivals had been increasing for the past few years. "It was known that the summer would be like this, and something could have been done to handle it better."

Refugee centers in Andalusia are overcrowded, and temporary tent shelters have been set up to deal with the influx of people. A majority of migrants, however, don't stay in Andalusia. They often continue their journey north to the Basque Country or Catalonia, hoping to get to France.

"If people need to flee, they will flee," says Cansino. "And they'll look for whatever route they can."

"They told me that I will stay here six months," she says, referring to a six-month program that the Spanish government places asylum-seekers in, which provides legal help and integration classes.

She says she left her small village in Nigeria two years ago, completely on her own, after being raped at age 15 and giving birth to a daughter whom she left with family friends.

Good can't read or write, but she learned English by watching U.S. movies. She's adding Spanish to that list, but says that she's not sure what she'll do for work.

When asked about her trip to Spain, she puts her face in her hands and shakes her head, saying that it's very difficult to talk about.

A 20-minute walk away from the refugee center is Málaga's City Hall. The old, classical-style building is fairly empty — public officials are still returning from summer vacation.

Raúl Jiménez, the city's councilor for social rights, says Spain does not have the infrastructure in place to deal with the recent increase of arrivals. He disagrees with the new Spanish government's decision to take in some of the rescue vessels turned away by Italy and Malta.

"It seemed like Spain would open its borders to let all migrants in," says Jiménez. "That has resulted in a 'pull factor' situation that, in the last months, has tripled the number of migrants coming in, compared to last year."

Cansino says this idea of "pull factors" — actions or circumstances that might incentivize migrants to come — is unfounded. He talks instead of "push factors" — reasons people flee their home countries to begin with. There aren't many legal channels for migrants from sub-Saharan African countries to enter Spain, he says, and once they've crossed without the right official documents, their chances of staying depend on where they're originally from.

Cansino worries that talking about the rising migration as an "invasion" or a "crisis" could lead to anti-immigrant rhetoric. The trend toward nationalism and right-wing populism across Europe, he says, is fresh on his mind.

"It's really worrisome," says Cansino. "Because I didn't think it could happen in Italy, and I think it can't happen in Spain. However, I'm starting to doubt that."