Accessibility links
Review: 'The House With A Clock In Its Walls' Is A CGI Mess The exquisite atmosphere and sense of foreboding that made John Bellairs' 1973 book a children's classic gets discarded in favor of a relentless riot of jump-scares and visual noise.

'The House With A Clock In Its Walls' Is An Eyesore

'The House With A Clock In Its Walls' Is An Eyesore 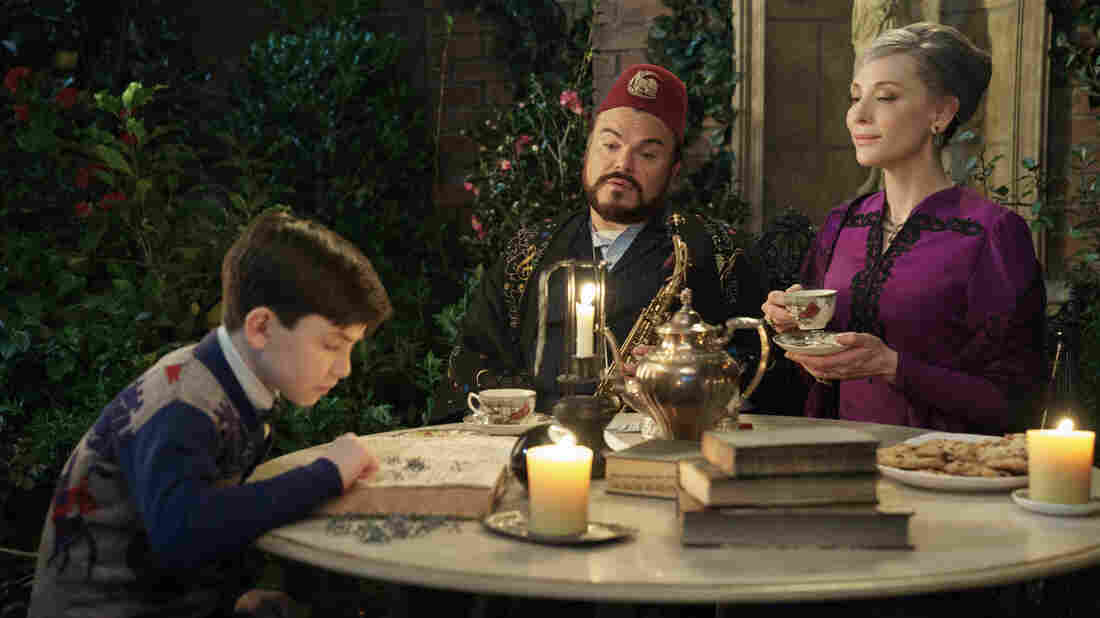 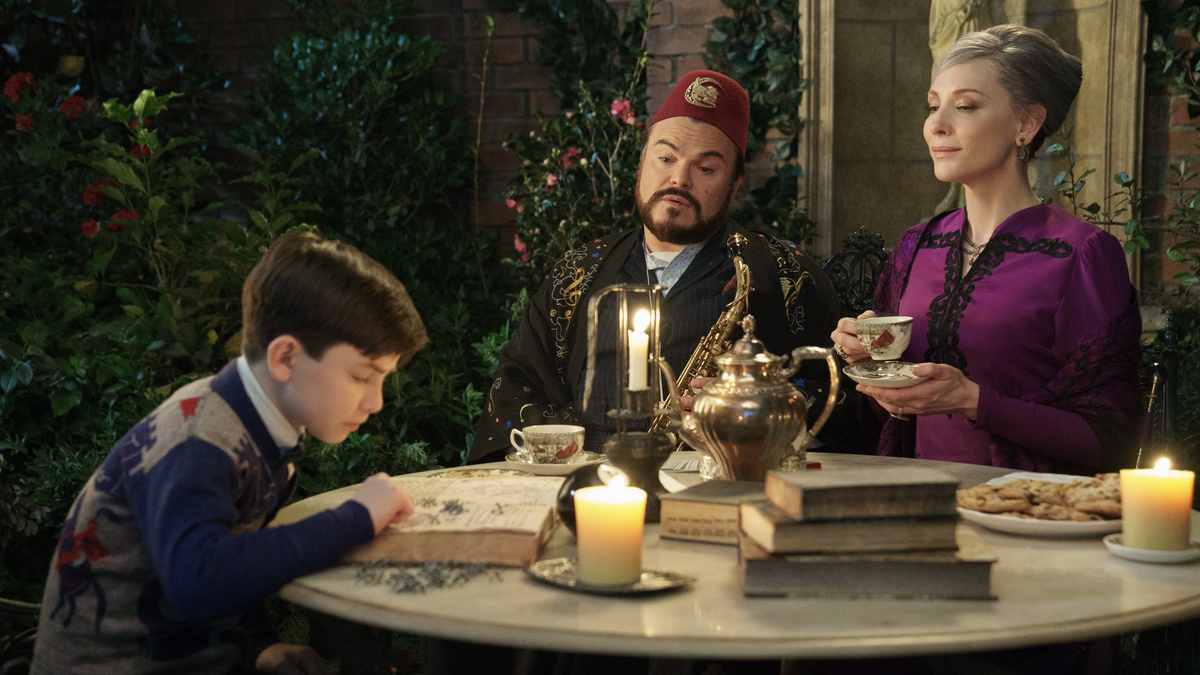 Magic is just a passing fez: Lewis (Owen Vaccaro), Uncle Jonathan (Jack Black) and Mrs. Zimmerman (Cate Blanchett) in The House with a Clock in its Walls.

There's a deft sleight-of-hand at work in John Bellairs' The House with a Clock in its Walls, a children's mystery published in 1973, about warlocks and witches, necromancy, and a doomsday machine that nonetheless carries itself with whimsy. Those who encountered the book as children will remember the lingering creepiness of its gothic elements, enforced by Edward Gorey's illustrations, and the old house at 100 High Street, which is full of wonder and terror in equal measure. Though busily plotted, it thrives in understatement and incidental detail, from an illusory glass ball atop the front coat rack to all-night sessions playing poker and eating chocolate-chip cookies.

The new film adaptation, written by Supernatural creator Eric Kripke and directed by Eli Roth, the horror-provocateur responsible for Cabin Fever and Hostel, doesn't have the patience for such grace notes. They've retrofitted Bellairs' book for the age of Harry Potter and Goosebumps, turning the house on High Street into a Hogwarts satellite where magic infuses every object and floorboard, and the CGI pops like the spring-loaded spooks at a carnival funhouse. Roth's instinct for horror maximalism is precisely the wrong approach to the material, which doesn't accommodate that much visual noise. The film seems terrified by the thought that kids could get bored for a second, so it keeps adding effects until it lands, almost inevitably, at a urinating man-baby.

Yet it takes some time to get up to speed. And during that time, there's plenty of evident potential in the casting of Jack Black as Jonathan Barnavelt, the benevolent warlock of High Street, and Cate Blanchett as Florence Zimmerman, his next-door neighbor and partner in sorcery. Roth turns the fictional town of New Zebadee, Michigan into an appealing combination of '50s Bel Air sheen and the type of place that would be overrun by giant spiders in a B-movie from the era. And that action, at least initially, is about introducing an orphaned boy to a world of wonders that effectively stifles his bouts of grief.

The geeky new kid in town is Lewis Barnavelt (Owen Vaccaro), who's arrived to stay with his estranged Uncle Jonathan, his only living relative, after his parents' death in a car crash. He soon learns that Jonathan and Mrs. Zimmerman are magicians and they happily welcome him into late-night card-and-cookie sessions and introduce him to some lighter spells. The one serious quirk in Jonathan's house is that it has a clock hidden somewhere behind the walls, but neither he nor Mrs. Zimmerman can figure out where it is or what it's for. The house used to belong to his late friend, Issac Izard (Kyle MacLachlan), another warlock, and they're certain the clock signals some terrible event that Issac had plotted before his death. In an effort to impress a popular kid at school, Lewis drags a forbidden magic book off the shelf and accidentally raises Issac from the dead, triggering a supernatural throwdown to save the world.

The House with a Clock in its Walls excises most of the ghostly encounters that occur after Lewis raises the dead, including a car pursuit that may be the scariest section in the book, and cuts straight to the hectic confrontation. The ramp-up of increased effects and Jack Black improvisations spills over into a retina-searing spectacle of flying CGI pumpkins, armies of mechanized dolls, and Mrs. Zimmerman zapping beasties with her purple umbrella laser blaster. Considered generously, this is Roth, a low-budget filmmaker, given the keys to the kingdom and taking the fullest possible advantage. But more likely, this is simply his idea of what attention-addled kids might like.

What's lost in this adaptation are more insinuating horror or the notion of magic as a craft that takes constant discipline and refinement to control. In a word, atmosphere. The short-term excitement of jump-scares and readily accessible spells are a poor trade-off for the steadily deepening mysteries and fears that have made Bellairs' book such an enduring classic. Bellairs and Gorey conjured images meant to play on the imagination forever. Roth's film will barely survive the ride home.