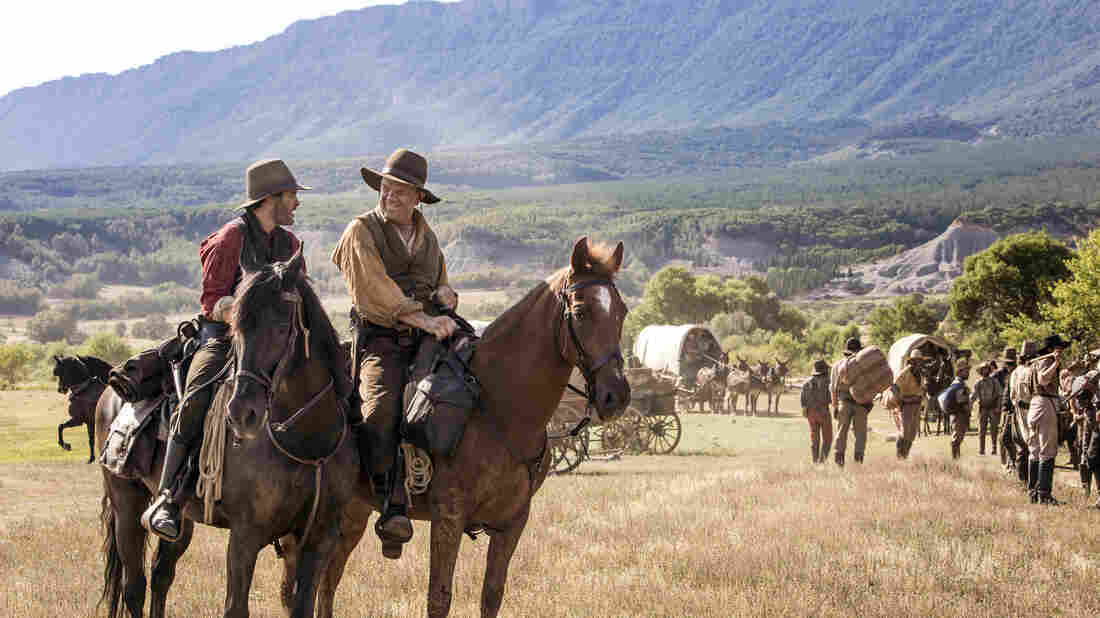 The title of The Sisters Brothers is both tongue-in-cheek and matter-of-fact. It's about two brothers with the last name Sisters: Eli Sisters and Charlie Sisters.

The whole movie is like that, a series of deadpan jokes wrapped in a shambling no-big-deal realism. The humor never feels arch or tacked-on; it wells up naturally from the characters and the funny, stirring, brutal story in which they find themselves.

Adapted from a 2011 novel by the Canadian author Patrick deWitt, The Sisters Brothers follows a bunch of outlaws and prospectors searching for gold and deliverance across the Oregon Territory.

Outlaw brother Eli and Charlie, played by John C. Reilly and Joaquin Phoenix, work for a very bad man called the Commodore, whom you may recognize as the Dutch actor and B-movie veteran Rutger Hauer.

Under the Commodore's employment, the brothers have made something of a name for themselves: Slovenly and unreliable though they may be, they're awfully good at killing people.

Charlie is the younger, more volatile of the two brothers, and Phoenix, no stranger to wild-man roles, makes him both ferocious and disorderly: Some days he's so drunk he can barely stay on his horse.

Eli is the wiser, more mature one, perpetually exasperated with Charlie in a way that only a truly devoted brother could be. Reilly gives a performance of soulful, understated tenderness in the sort of leading role I wish he'd land more often. He also has a mug worthy of a great silent comedian: There's a hilarious running gag in which Eli slowly teaches himself to use a toothbrush, still a fairly new commodity in the Old West.

But while the Sisters brothers may get top billing, they aren't the only characters of interest here. The Commodore has ordered them to track down and apprehend a gifted chemist named Hermann Kermit Warm, wonderfully played by Riz Ahmed. He has invented a solution that immediately reveals the gold hidden in a body of water, eliminating the need for panning.

Before the brothers can get to him, though, Hermann joins forces with a thoughtful detective and fellow prospector named John Morris, played with wry eloquence by Jake Gyllenhaal. These four men are destined to cross paths and exchange a few bullets, though what happens to them next is far stranger than any of them could have expected.

One of the things you notice about The Sisters Brothers is just how ridiculously likable everyone is. OK, so Charlie's a mess, but the others, although beaten down by lives riddled with violence and persecution, maintain an optimistic spirit.

Eli, tired of his life of lawlessness, just wants to settle down. The more idealistic Hermann and John hope to establish a community somewhere in Texas, where peaceful, like-minded people can live in accordance with truly democratic principles. It's a pipe dream, but a beautiful one.

This may be the director Jacques Audiard's first English-language production, but given his mastery of genre filmmaking, and also France's long-running love affair with the mythology of the American West, it's less of a departure than you might think.

Audiard revels in the iconography of the western: the men on horseback, the gorgeous sunset vistas. The few memorable female characters we meet remain mostly on the sidelines: Rebecca Root appears as the woman who runs a town the brothers pass through, while Allison Tolman plays a sex worker who has a sweet, chaste interaction with Eli.

As Audiard has shown in his past thrillers, like A Prophet and The Beat That My Heart Skipped, he's primarily a poet of wounded masculinity. Here he exposes the vulnerability behind his characters' rawhide-tough surfaces.

One of the most memorable sequences finds these four men working beside a lake, preparing the water for Hermann's miracle solution. But really they're just hanging out, talking and bonding in a way that, you suspect, men of their time and place rarely permitted themselves to do. It's a warm respite from the harsh, painful reality of their lives and the grim fates that await most of them. The Sisters Brothers starts off looking like a rickety joke and winds up nearly breaking your heart.