Accessibility links
After A Wildfire Destroys Their Home, Family Struggles To Find 'A New Normal' A couple who lost priceless belongings to the Tubbs Fire that swept through Northern California last year tries to move forward. "Everything will forever be different for us," Cody Walker says. 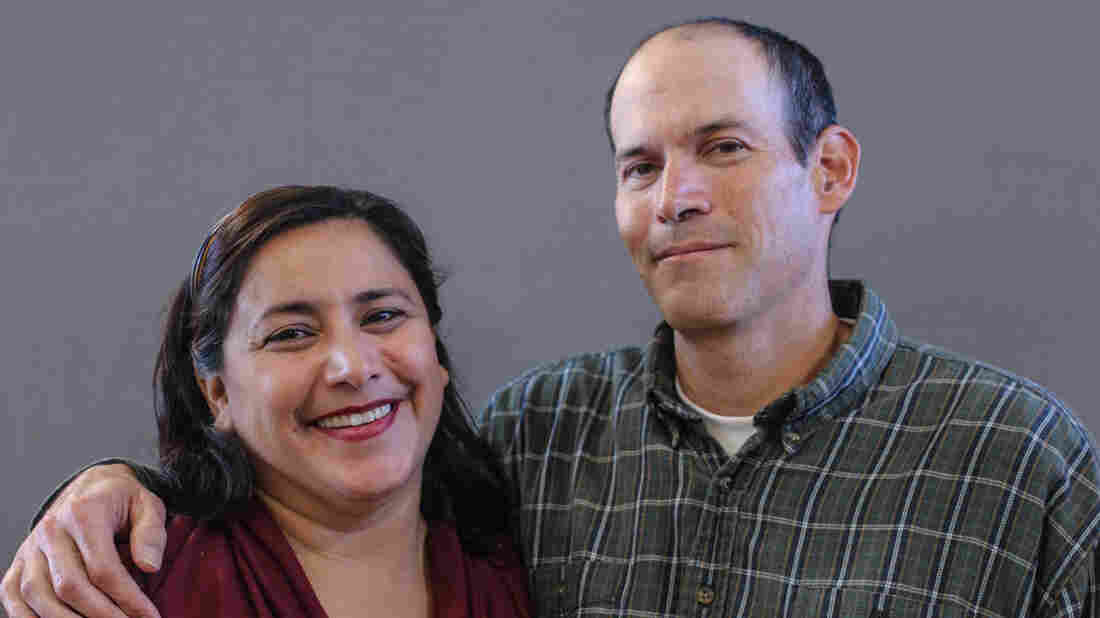 In a StoryCorps interview last December in Santa Rosa, Calif., Monique (left) and Cody Walker recall the aftermath of the Tubbs Fire, which leveled the home where they raised their five children. Yosmay Delmazo/StoryCorps hide caption 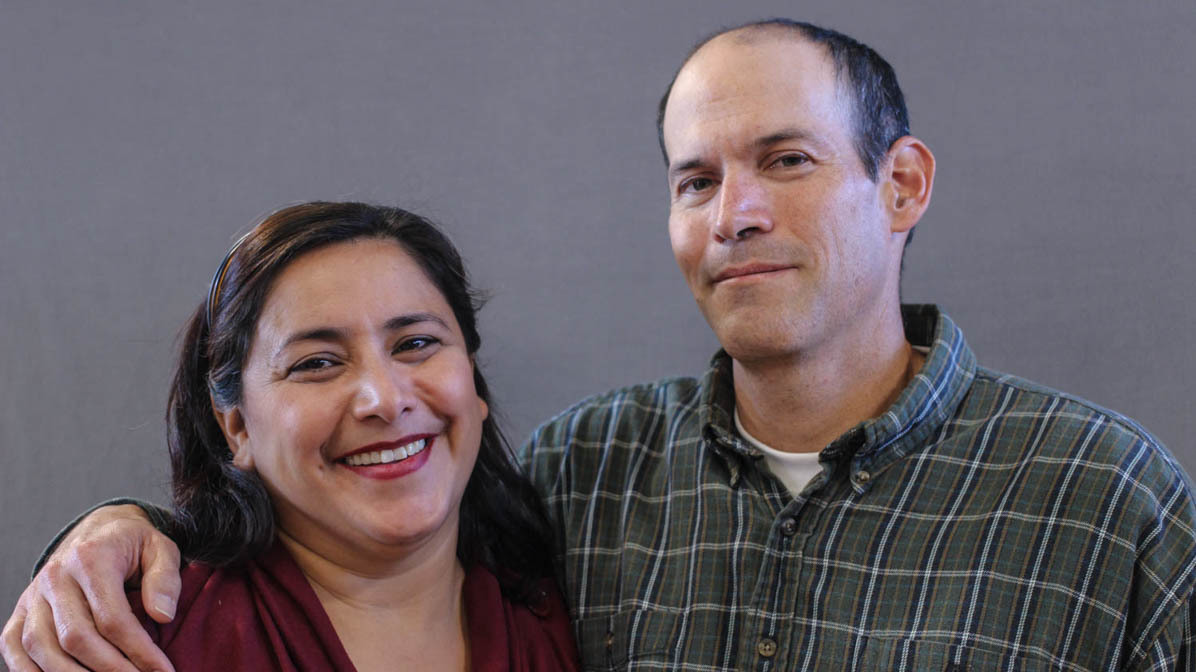 In a StoryCorps interview last December in Santa Rosa, Calif., Monique (left) and Cody Walker recall the aftermath of the Tubbs Fire, which leveled the home where they raised their five children.

Earlier this week, firefighters finally contained the Mendocino Complex Fire. It burned more than 400,000 acres and has been called the largest wildfire in California history.

The devastation wreaked by wildfires is a reality that Monique and Cody Walker know well. Last fall, the couple had to flee their Santa Rosa, Calif., home with their five children when the 2017 Tubbs Fire swept through Sonoma and Napa counties. More than 4,000 homes, including the Walkers', were destroyed.

Two months after the fire, Monique and Cody sat down for a StoryCorps interview to talk about what it's like trying to move on after losing most of their belongings.

"When we left that night, we already had the glow of the fire behind us," says Monique, now 42. "You're hearing on the radio all the places that you can go to, but nobody's telling you which way to go."

Cody, also 42, remembers that the streets were congested as residents tried to flee. Cars were "driving up onto the sidewalks and the front yards," he says.

The family was blindly escaping danger, Monique says. "You're like an ant with a magnifying glass chasing you, and you're just randomly going, but you don't know if it's gonna be safe ahead of you," she says.

They evacuated first to Cody's work, and then to their church. 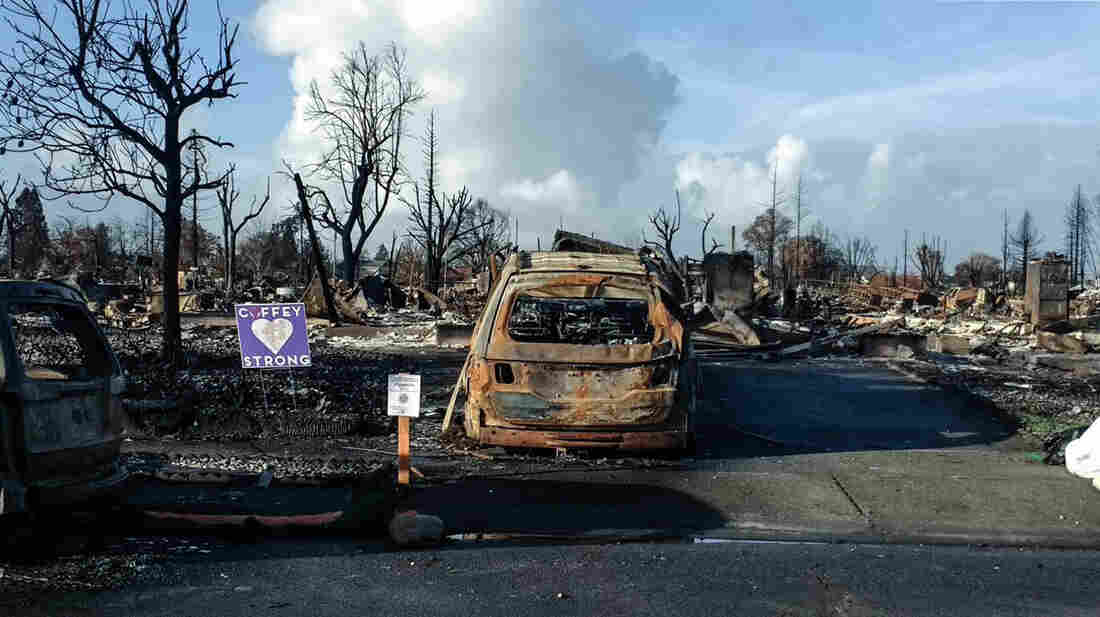 The plot of land on which the Walkers' home used to sit — and one of their cars — is seen after the 2017 Tubbs Fire. Courtesy of Monique and Cody Walker hide caption 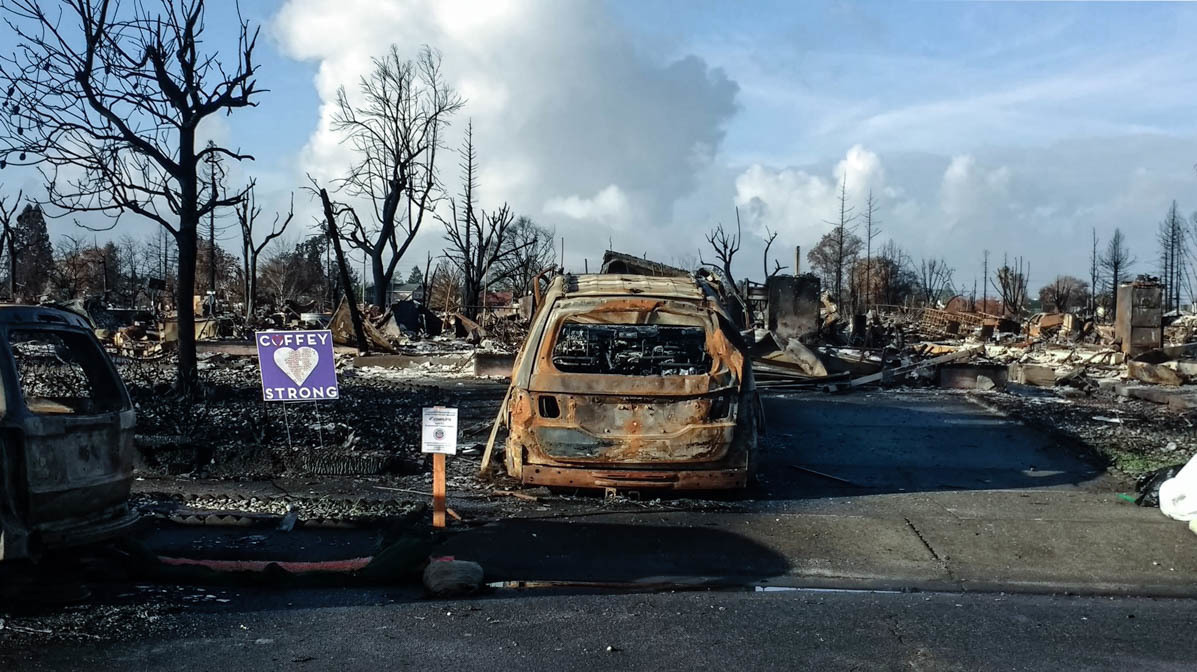 The plot of land on which the Walkers' home used to sit — and one of their cars — is seen after the 2017 Tubbs Fire.

Courtesy of Monique and Cody Walker

When Cody returned to the neighborhood the next morning, the house was completely gone. So were all of the houses in the neighborhood. The couple brought their kids with them later that day.

"It looked normal until you got closer to the railroad tracks," Monique says. "And then you'd see one house burned, and then two houses were fine. And then all of a sudden you got past the railroad and everything was gone. And you don't know what street you're on because everything looks the same — burnt and twisted metal and just ash everywhere."

"Our oldest daughter almost fell over when she saw the house," Cody says. "She cried. And we just held each other for a long time."

The Walkers felt helpless. "It just was a numbing feeling you know? It's like, what do you do? I mean, it's gone," Cody says. "I just wanted to punch stuff, really. But that doesn't do anything."

In A Family's First House, A Lasting Lesson: You Can Always Give

The hardest part, say Monique and Cody, has been losing invaluable items tied to their family identity. "It's hard not thinking that maybe there was a chance that you could've saved something else," Monique says. "And I keep going back there, and I'm like, OK, maybe I should sift one more time and I might find my wedding ring or maybe if I look I can find my daughter's rock that she really liked."

Destroyed, too, are the woven cradle baskets — given to each of their kids — that honored Cody's Native American heritage. "You don't want to let go of the past because that's how we learned how to live and be who we are," Cody says. "It's hard to say, 'OK, all we have carrying forward really at this point is our DNA,' you know?"

"Friends and family call us and ask how we're doing, and they don't want to hear that we're not doing OK," Monique says.

The family will have to find a "new normal," according to Cody. For now, while they wait for their home to be rebuilt, the Walkers live in an apartment just south of Santa Rosa.