Accessibility links
Rosenstein Denies That He Discussed Recording Trump, Invoking 25th Amendment The deputy attorney general rejected a story that described him musing about secretly wearing a wire or conferring with members of the Cabinet about invoking the 25th Amendment. 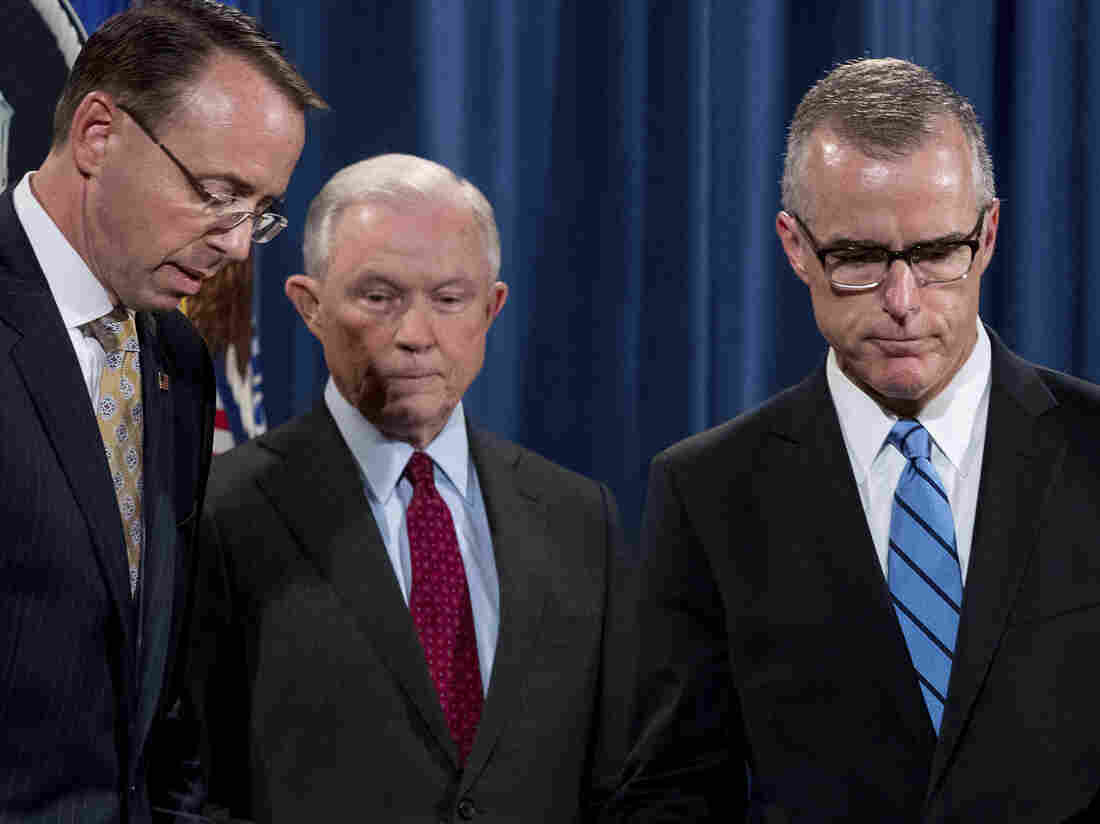 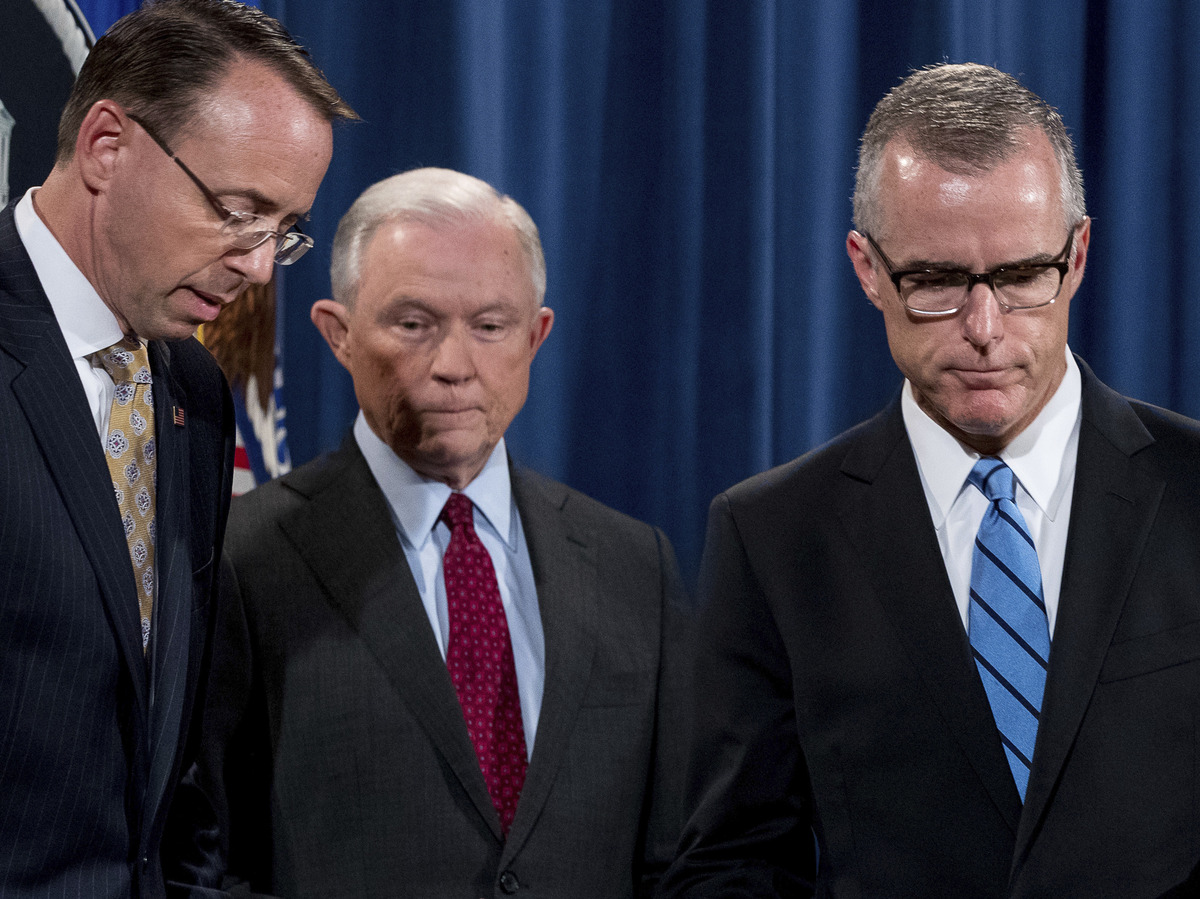 Deputy Attorney General Rod Rosenstein denied an explosive report on Friday that said he discussed secretly recording President Trump at the White House and that he might seek to recruit members of the Cabinet to invoke the 25th Amendment to remove Trump.

He continued: "I will not further comment on a story based on anonymous sources who are obviously biased against the department and are advancing their own personal agenda. But let me be clear about this: Based on my personal dealings with the president, there is no basis to invoke the 25th Amendment."

That amendment deals with presidential succession.

Other reports on Friday suggested that Rosenstein had discussed wearing a wire to talk with the president — but that he was being sarcastic or facetious.

NBC News has now been told by a source who was in the room that Rosenstein did indeed discussing wearing a wire on the president, but he did so sarcastically. Former FBI director Andrew McCabe appears to have a different recollection.

Andrew McCabe was suggesting that DOJ investigate the president, per @mattzap & @DevlinBarrett reporting. “What do you want to do, Andy, wire the president?” Rosenstein responded. https://t.co/WqXCof3QZ2

In a second statement released by the Justice Department Friday night, Rosenstein specifically addressed those suggestions and again touched on the reporting about the 25th Amendment. "I never pursued or authorized recording the President and any suggestion that I have ever advocated for the removal of the President is absolutely false," the deputy attorney general said.

A New York Times story cites, among other reporting, memorandums by former FBI Deputy Director Andrew McCabe about his dealings with the White House and other Justice Department officials.

An attorney for McCabe acknowledged on Friday that McCabe did write memos, but that he had given them to special counsel Robert Mueller and doesn't know how The New York Times may have gotten them.

"Andrew McCabe drafted memos to memorialize significant discussions he had with high-level officials and preserved them so he would have an accurate, contemporaneous record of those discussions," said his lawyer, Michael Bromwich. "He has no knowledge of how any member of the media obtained those memos."

Tension up and down Pennsylvania Avenue

The report about Rosenstein follows months of ill will involving Trump, his Republican supporters and the leadership of the Justice Department.

Trump said earlier this week, "I don't have an attorney general," underscoring his deep antipathy toward Attorney General Jeff Sessions.

Rosenstein also has been a political target for his role in appointing Mueller and for signing an application for surveillance of Carter Page, a former foreign policy adviser to Trump's 2016 campaign.

Republican antagonists in the House also have targeted Rosenstein as they have tried to investigate the Justice Department's probe into the Russian attack on the 2016 election.

House Judiciary Committee Chairman Bob Goodlatte, R-Va.; House intelligence committee Chairman Devin Nunes, R-Calif.; and others have scourged Rosenstein over what they call his foot-dragging in producing documents related to the early phases of the probe.

The FBI and Justice Department leaders also have been censured from within.

McCabe was fired after an internal investigation found he "lacked candor" in terms of dealing with investigators. Former FBI Director James Comey — fired by Trump — was upbraided by a huge internal report for his handling of the Hillary Clinton email investigation.

Others — a former special agent, Peter Strzok, and a former FBI lawyer, Lisa Page — embarrassed the bureau when internal investigators discovered they had sent each other scores of highly political text messages, including some that criticized Trump.

Trump and his Republican allies say the Russian investigation is the product of "biased" conspirators deep within federal law enforcement and have picked away at a number of targets at all levels.

Trump's son Donald Trump Jr. picked up that theme on Friday in a Twitter post that grouped Rosenstein with those who, in his view, are out to get the president.

Shocked!!! Absolutely Shocked!!! Ohhh, who are we kidding at this point? No one is shocked that these guys would do anything in their power to undermine @realdonaldtrump.

Supporters of the Mueller investigation said the Times report shouldn't be a casus belli for Trump to fire Rosenstein — as some have called for him to do — or to otherwise try to disrupt Mueller's work.

"This story must not be used as a pretext for the corrupt purpose of firing Deputy Attorney General Rosenstein in order install an official who will allow the president to interfere with the special counsel's investigation," said Senate Minority Leader Chuck Schumer.

The Times story focused on the early part of Rosenstein's tenure in the Justice Department leadership. Trump had just fired Comey based partly on a rationale that Rosenstein had agreed to develop, which the Times said Rosenstein found jarring.

The former U.S. attorney felt as though he had been used, the newspaper reported.

As Trump searched for a replacement, Rosenstein discussed the idea of FBI officials going to meet him secretly recording their interactions, according to the Times.

McCabe may have memorialized those discussions in his memos, which followed the series of memos Comey also had written since his first meeting with Trump.

This story must not be used as a pretext for the corrupt purpose of firing Deputy Attorney General Rosenstein in order install an official who will allow the president to interfere with the special counsel's investigation.

Comey has said that he was so unsettled by his first encounter with Trump — because of a fear that Trump might later lie about their conversations — that he felt compelled to begin writing down accounts each time they talked.

McCabe, who succeeded Comey as acting FBI director in May 2017, evidently did the same.

Both men had bad relationships with Trump. In McCabe's case, he had been the subject of criticism by Trump and Republicans for months over his wife's political connections with Democrats in Virginia, where she had unsuccessfully sought state political office.

Comey's own memos recount him defending McCabe to Trump and trying to assure the president that McCabe could be professional and continue to serve in the leadership of the bureau even after the political attacks of the 2016 campaign.

McCabe's memos are likely to form part of his book about his time at the FBI, which is scheduled to be published in December.

Trump denies the account of events that Comey has given in his memos and to Congress, including Comey's description of Trump asking him for his loyalty and to ease up on then-national security adviser Mike Flynn.

Those descriptions, as well as whatever other evidence has been gathered by Mueller, could be part of a potential future obstruction of justice case against Trump.

A previous Web version of this story incorrectly called Chuck Schumer the Senate majority leader. He is the minority leader.