Accessibility links
Review: Defend 'American Vandal' Season Two From Those Who Would Dump On It Now that enough people have seen the second season of Netflix's comedy/drama/true crime parody, your weekend will be full of people comparing it unfavorably to season one. Here's why they're wrong. 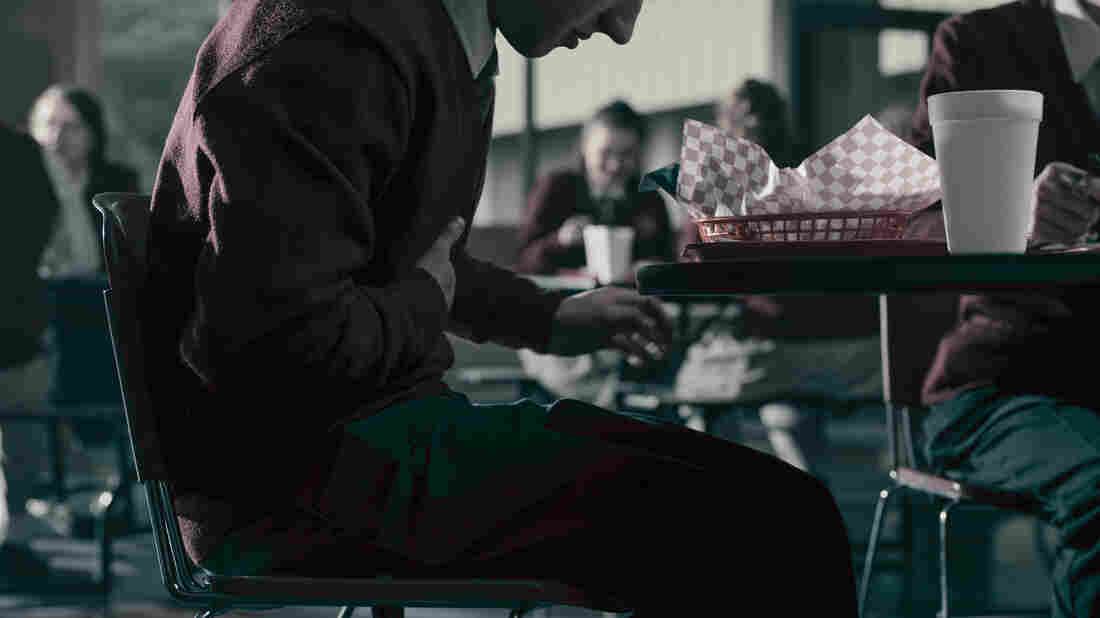 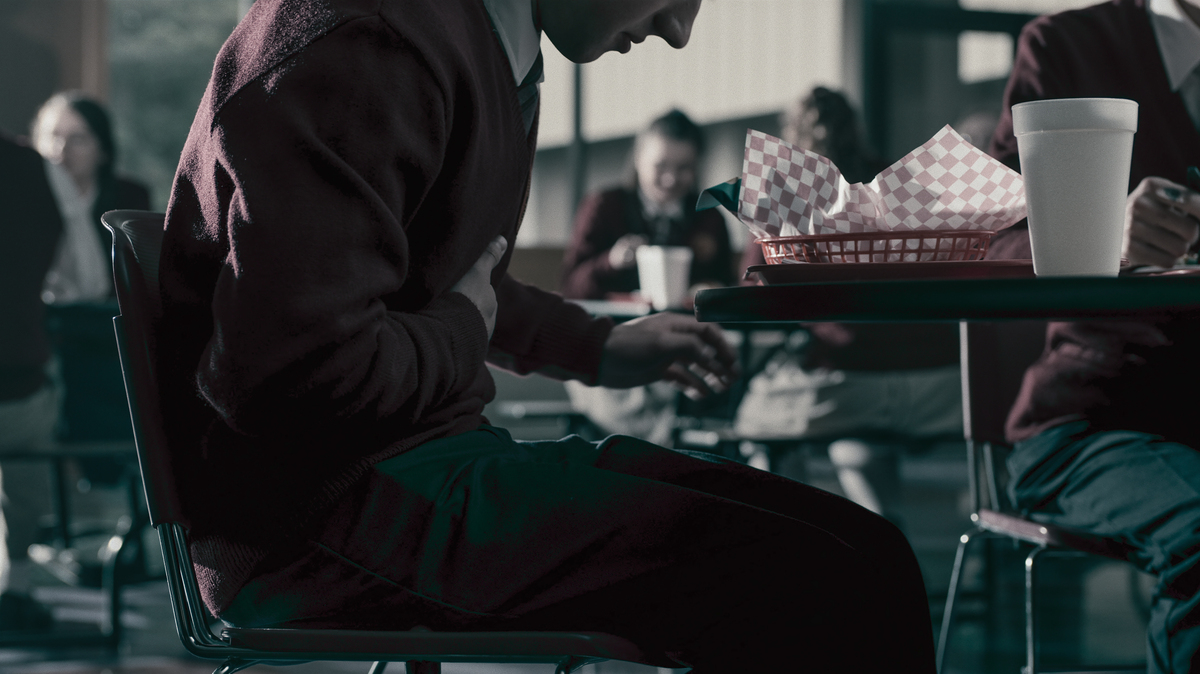 The second season of Netflix's American Vandal uses several true-crime techniques, like this moody reenactment, to explore its fake-crime story.

The second season of Netflix's American Vandal dropped last Friday. The first season proved a slow-build, under-the-radar, word-of-mouth phenomenon; the second arrived to a devoted and vocal fanbase. Season one was something you started hearing about over the course of weeks and months, from disparate friends and family; full, spoilery reviews of season two were posted at 12:01:01 a.m. last Friday.

They're good-to-glowing, those reviews, mostly. But that's critics. Critics have to make cases, argue on the merits, note the shortcomings — show their work, in other words, citing specific examples.

But your friends and family don't. They can simply hold opinions, and voice them, loudly, repeatedly, at your neighborhood bar, over the dinner table or at some friend of a friend's interminable game night.

The critics have had their say already. By the end of last weekend, most outlets who were prepared to weigh in on Vandal's second season had done so.

But people who don't get paid to think and write about television shows — even those who consider themselves fans of American Vandal season one — need more time to absorb a season's worth of shows, generally speaking. Most can't drop everything and binge eight episodes; they must work to fit the new season around their schedules of jobs, kids, friends, chores, happy hours, plans.

This second weekend, then, after its had time to steep, will be the moment when American Vandal season two truly become a point of discussion, while you're out with friends or spending time with family. We want you to be prepared.

You've seen the new season. You've read the reviews, maybe. Inevitably, however, you're going to be faced with someone, or several someones, who think that simply criticizing something is the same thing as critiquing it. Who believe — as many people (and, to be fair, several critics) do, that simply espousing a negative opinion makes the espouser seem somehow smarter and more discerning.

Here's some of the go-to, reflexive, low-hanging-fruit complaints we've been hearing, and some suggestions on how to respond.

THEY SAY: "Without Dylan, there's no heart."

YOU SAY: Granted, Jimmy Tatro's portrayal of Dylan Maxwell — the popular-but-dim, bad-boy chief suspect of American Vandal season one — was funny and soulful and, ultimately, heartbreaking. He was the season's linchpin, because our affection for him took us us along as the show slyly pivoted from true-crime parody to seriocomic meditation on class in America. He was great, and wildly effective. He is missed.

But the show's determination to avoid repeating itself manifests in ways large and small — the largest being our chief suspect. Kevin McClain (Travis Tope) is no mouth-breather like Dylan, and he's a good deal more off-putting, with his sundry affectations and bird-like, expressionless stare. That's important, because the poop-related crimes in question are too intricately planned and diabolical for the Dylans of the world to accomplish. No, they're the deranged product of a mind that, we must believe, a kid like Kevin could conceivably possess. It's heart you want? Kevin's tale proves just as sad as Dylan's, but Tope's performance is much more guarded and circumspect than Tatro's garrulous jock could ever be — he makes you work harder for it.

And if it's garrulous jocks you miss, season two serves one up, in the form of DeMarcus Tillman (Melvin Gregg), the charming, funny and popular basketball star. Like Dylan before him, DeMarcus is a creature of impulse, not calculation. And like Dylan, he emerges from the season a much different, and more melancholic, person than he was when it began.

Both Tope and Gregg do great work, creating achingly recognizable characters grounded in the real world. Vandal ruthlessly satirizes true-crime conventions, but it's much gentler — even downright sweet — to its characters. It never parodies these kids, or their world. If it did, we couldn't invest enough in their lives to care.

YOU SAY: Ok well this one's tricky, because the world divides itself sharply between Sex-Joke People and Poop-Joke People. They are two militant camps who do not understand — who cannot begin to comprehend — one another.

I confess to being sympathetic to those who espouse the above opinion, as I am lifelong Sex-Joke Person, and on any occasion I am forced to interact with a Poop-Joke Person I spend it searching for the nearest exit. This is because sex is fun and embarrassing, while poop is gross and humiliating.

That's not a truth universally acknowledged, mystifyingly enough. If it were, the large and thriving whoopie-cushion economy would not exist, to say nothing of the fake-dog-poop industry. The world would be a better place, empirically, but we live in reality. A fallen, gross, poopy reality.

Season one's d***-besotted plotline appealed to me, because the thing that made American Vandal so great was the juxtaposition between its gravid true-crime approach, and its exultantly dumb, juvenile subject: "Who did the d***s?"

Season two starts off with poop-related content that some will find hilarious and I, for example, find vile, horrifying and nauseating. It's footage that gets used and re-used often, over the course of the season, never losing its ability to unsettle.

But it turns out that this precise overuse — the diligent, dogmatic dissection of that footage — is what makes American Vandal work, not the footage itself. The series is forcing us to look at some pretty gross things — but its true subject is how we look at things now. The techniques and tropes of true-crime, with its dense web of theories and conjecture and red herrings and reversals, is really what American Vandal wants us to examine. Last season, it was "Look at what happens when we bring all of this elaborate narrative infrastructure to bear on something as meaningless on some spray-painted Toyotas." This season it's "Look at what happens when we take the same approach and apply it to poop-shame."

Again, the approach is the appeal, here, and it proves gratifyingly versatile. And that bodes well for next season, which, if past is prologue, will take up as its ostensible subject some entirely different bodily process/product.

Smart money's on boogers, but don't count out pus. Pus is looking good for 2019.

THEY SAY: "Not enough Peter and Sam."

YOU SAY: We get plenty of Peter and Sam (the excellent Tyler Alvarez and Griffin Cluck) this season — they're our narrators, our Greek chorus. No, they don't get their own storylines, like the first season's temporary breakup, but that's only to be expected. They've done the documentary meta-jokes already. Instead, this season is about deepening their characters' established traits. Peter is driven and impulsive, Sam the voice of reason.

But if that's not enough for you, keep an eye out for the suggestion of a romantic spark between Sam and Chloe (Taylor Dearden).

THEY SAY: "Season one was about how kids' fates can get irrevocably sealed early on, depending on their means. This season is just about the mystery itself, without any larger, deeper subject."

YOU SAY: Anyone who voices this opinion clearly hasn't made it to the final episode, which ends with a lengthy disquisition on The Culture Of Social Media Today. It's heavy handed, sure — but again: That's exactly the point. True-crime series love to reach for deep meaning in their closing minutes, with ponderous narration and performative empathy. It's a way for creators to shield themselves from accusations of exploiting the crime and its victims. So that last speech may be wildly unnecessary, but it's on-brand.

It also happens to be accurate. While the first season of Vandal used social media the way many other high-school-set shows and movies do today — to build out the world and place characters in a recognizable context — season two ultimately becomes about social media: online personae, ruined reputations, the conflation of one's personality with one's personal brand. It's specific, and relevant, without any of the sanctimony and judgment you find in shows like CSI and, frankly, 13 Reasons Why.

YOU SAY: Okay well look we all miss The Kraz. Ryan O'Flanagan's shaggy haired, tragically hip tryhard teacher willing to say anything — anything — to ingratiate himself with his students was someone we all recognize. He was, like the series around him, equal parts funny and sad.

But season two offers a winning variation on that pitiable theme, with Sarah Burns' Vonnegut stan, Miss Montgomery. I'd put her blissfully self-deluded speech about how much the kids love Vonnegut's birthday alongside any Kraz scene.

... So there you have it. We hope that, armed with these responses, you will be able to go toe-to-toe in discussions of American Vandal season two with anyone who tries to dump on it.