Accessibility links
Overflowing Hog Lagoons Raise Environmental Concerns In North Carolina Hog lagoons overflowed in the wake of Hurricane Florence, but it's not the first time farmers have had to deal with this. These lagoons are used to collect pig waste, but what happens when they fail? 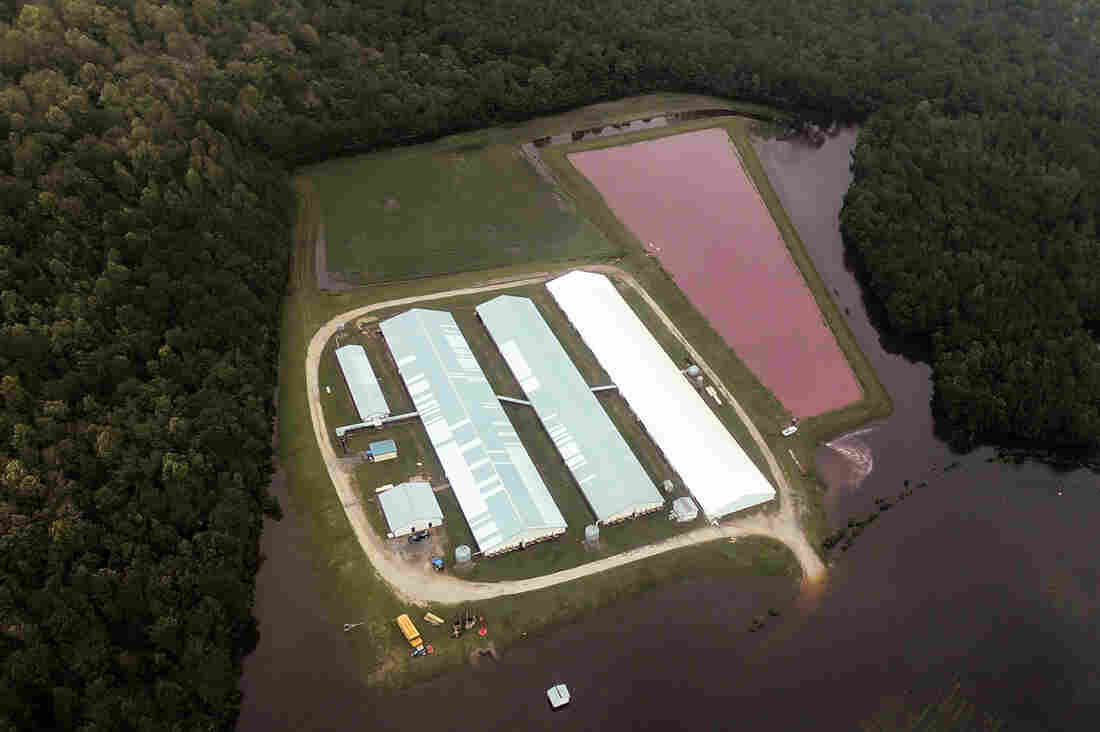 Pink ponds, like the one seen here, are common on hog farms throughout North Carolina. The ponds, called hog lagoons, collect the animals' feces and are used for waste management. Rodrigo Gutierrez/Reuters hide caption 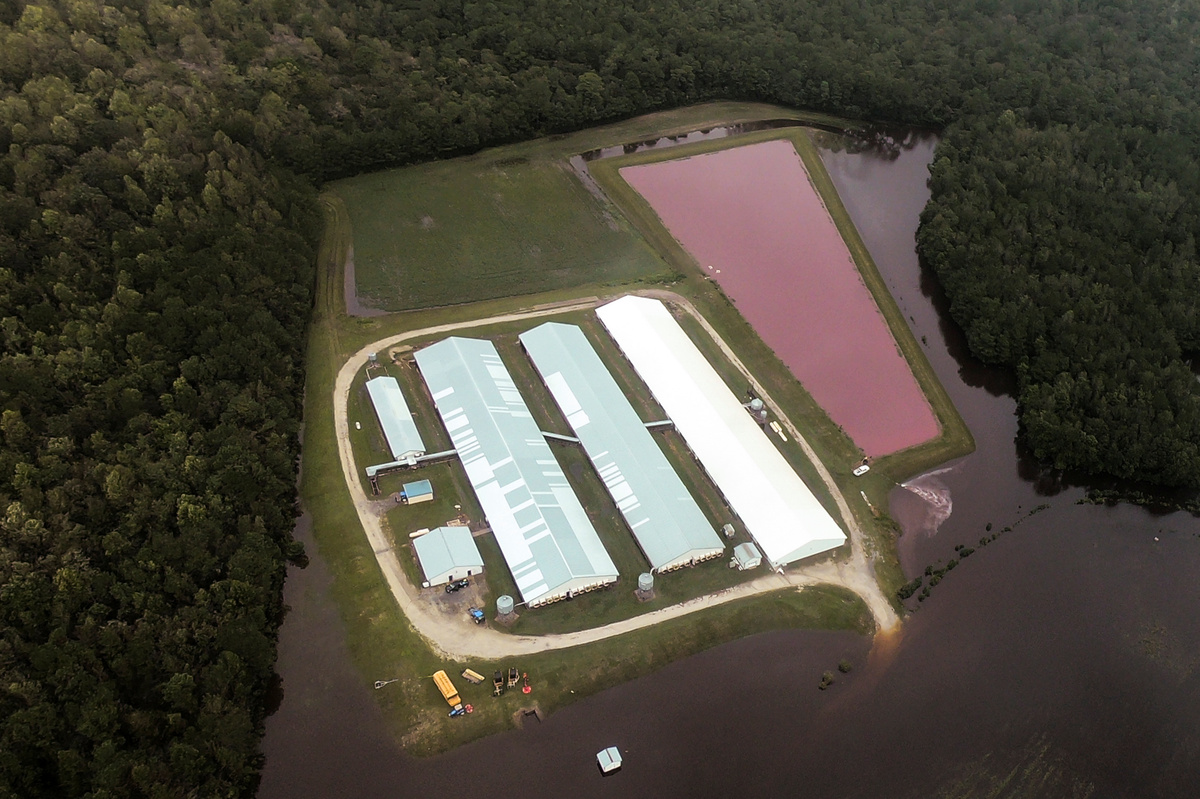 Pink ponds, like the one seen here, are common on hog farms throughout North Carolina. The ponds, called hog lagoons, collect the animals' feces and are used for waste management.

With the full extent of the damage done by Hurricane Florence still being assessed, environmentalists and health officials are expressing concern over the pink shaded ponds on hog farms that have overflowed into surrounding flood waters.

No, those ponds aren't hogwash, they're actually hog waste.

Technically, the pools of waste are hog lagoons. They're used to collect waste from the animals that then mixes with water in order to break the feces down.

Mark Rice, director of the animal and poultry waste management center at North Carolina State University, says the pink hue of a hog lagoon is the result of a bacteria in the mixture.

"It's actually a naturally occurring bacteria that consumes sulfur compounds," Rice told Weekend Edition host Scott Simon. "It's beneficial to have it in the lagoon. It helps reduce odor to some extent, so if you see that, you've got a healthy, functioning lagoon."

And there are a lot of those lagoons in North Carolina, a state where the pork industry brings in billions of dollars. The state has said that at least 50 lagoons overflowed in the wake of Hurricane Florence and many more have the potential to spill over as well.

This has some people, including Kemp Burdette with the advocacy group Cape Fear River Watch, concerned about the environmental impact this overflow will cause.

"The water is not safe at all. I would expect to see extremely high levels of dangerous bacteria," Burdette said in an interview with Morning Edition host Steve Inskeep. "I also know that this water is coming into contact with communities that are flooded and that's going to be a real problem as things evolve."

It's a problem that North Carolina has seen before.

In 1999, flooding from Hurricane Floyd caused lagoons to overflow and mix with flood waters. At that time, large pork and poultry operations were loosely regulated, according to The New York Times.

Hurricane Floyd forced North Carolina to make changes. As NPR's Dan Charles reports, that included the state's decision to buy out some of the farmers operating in flood plains and shut them down, though some remain.

The Cajun Navy: Heroes Or Hindrances In Hurricanes?

Rice says that overflows became less common after Hurricane Floyd, after which farmers were forced to reevaluate how they conduct lagoon management.

"It's uncommon simply because the producers typically manage the lagoons to have their lagoons pumped down to the lowest possible level by hurricane season, so by late August," Rice says. "It's certainly something we don't want to see, but when you get 30 inches of rainfall there's going to be some of that."

During a tour of the areas affected by the storm, Burdette was able to see some of that damage firsthand.

For the two lagoons that failed completely, Burdette says it's estimated that 7 million gallons of untreated swine feces were unleashed into surrounding waterways. As that waste overflows, Rice says it will ultimately become part of the surrounding ecosystem.

"What actually overflows is more dilute than what it would have been without the rain, and then with everything else that's coming down the river it will get assimilated into the ecosystem one way or another," Rice says. "In a case like this where there's the major flooding, most of the nutrients are going to get carried on out to the ocean."

Until the water is fully sampled and tested, Burdette says residents should be mindful of contact with the contaminated water and know the risks.

"As people are wading around in this water, and splashing this water up onto their face, and this water is getting into their cuts and scrapes, it's going to be very dangerous," Burdette says. "There's going to be a lot of opportunities for people to get sick."

On Monday, the Environmental Protection Agency put out a statement that several community systems in the state had stopped supplying drinking water and that the agency was monitoring for potential contamination. And on Friday, state officials in North Carolina said they were monitoring hog lagoons and working with water treatment plants and water systems "and responding to any releases or issues that impact public water supply."

In an interview with Science, microbiologist Rachel Noble said that while "municipal systems have regular testing protocol," it will still take time to get results for larger systems as well as the approximately 900,000 households that get their drinking water from private wells.

"To be safe, people should stick to bottled drinking water until their well can be tested," Noble told Science.

Noble added that if people do ingest some contaminated water they might experience diarrhea, vomiting, and nausea.

The North Carolina Department of Agriculture and Consumer Services released a statement on Friday saying that farmers whose crops were flooded from the storm would not be able to use those for human consumption because of potential health risks.

"Crops and commodities exposed to floodwaters are considered adulterated by the U.S. Food and Drug Administration and cannot enter human food channels," the statement read. "They also cannot be used for animal feed unless they pass a testing protocol."

In addition to the loss of crops that farmers are facing, the state agriculture department estimates that 5,500 pigs died during the storm and 3.4 million birds were killed.

"It's a small fraction of what could have been if there hadn't been steps taken to move animals from flood prone areas from before the storm," Rice says. "Certainly it's tragic but agriculture is a leaky system. It's prone to all sorts of weather related perils and that's just unfortunately the way it is."