Accessibility links
Good Charlotte Speaks To 'Generation Rx' Good Charlotte ruled the pop punk world in the early 2000s. Now, as rocker dads, the band has released a new album to inform the next generation about depression, drug use and more. 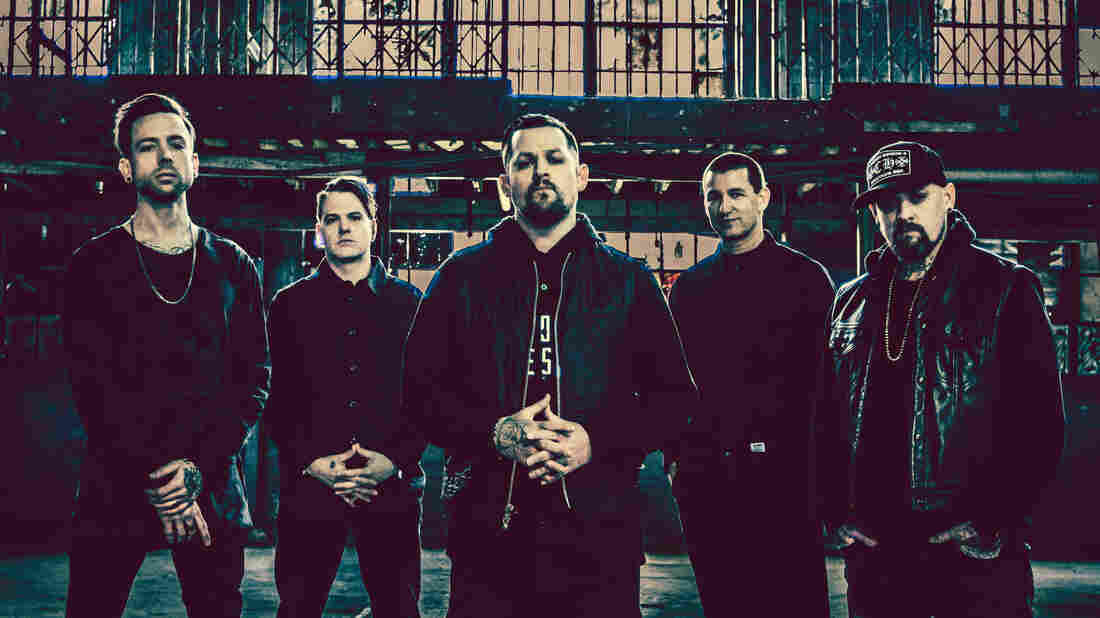 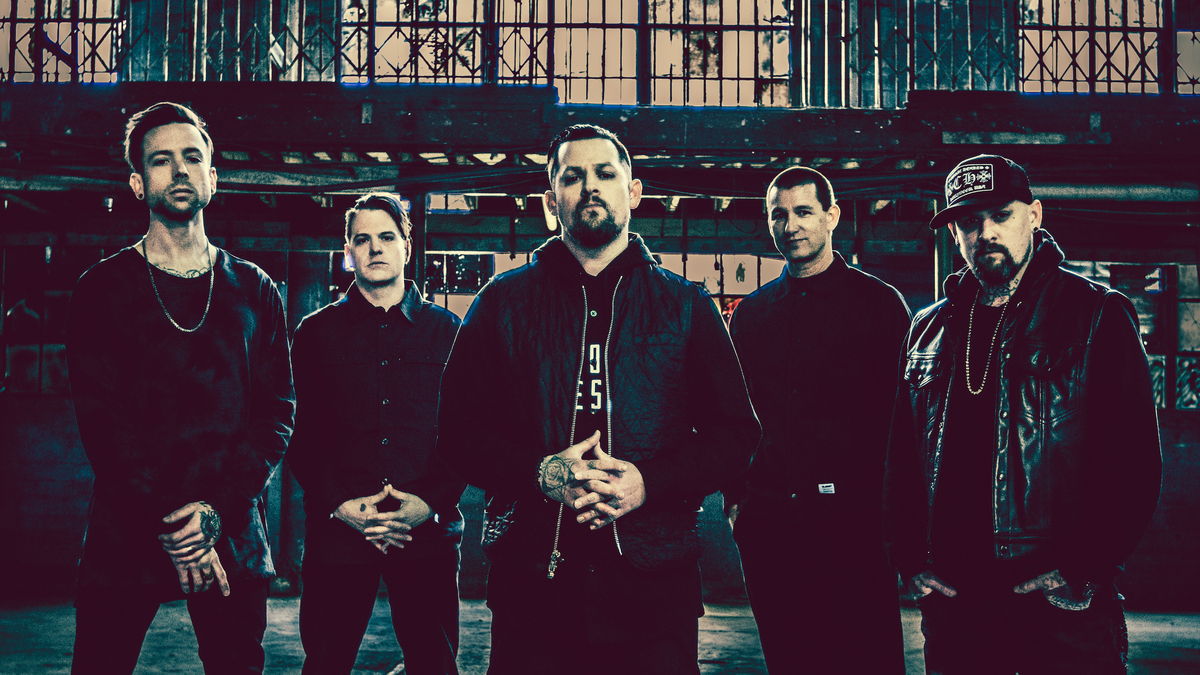 Ville Juurikkala/Courtesy of the artist

Let's go back to 2002. Good Charlotte's "The Anthem" was the sound of the new millennium. The Maryland group was at the top of the list of early 2000s emo punk bands. The angst was very real and these bands stood out with music that expressed the feelings of kids who saw themselves as fringe outcasts and misfits. Now it's almost 20 years later, and lives of the members are very different — they're married and most have kids. But Good Charlotte is still making music and speaking to the moment. The band's latest album Generation Rx, out now, aims at speaking to the concerns of today.

Joel and Benji Madden, the twin brothers that started the band together back in high school, spoke with NPR's Michel Martin about themes of the album, connecting with music's younger generations now and facing their demons together.

Michel Martin: Let me start by asking you about the name of the album, Generation Rx. I'm told, or at least I think I read, that this album actually started when you played at a memorial for rapper Lil Peep. Is that right?

Benji Madden: Yeah, Peep was a fan of the band, and we had gotten very friendly. We were really appreciative of the new sound that he was pushing. Overall, he was genuinely just a really sweet guy, and very creative. We thought what he was doing was really innovative. When he passed away, I think it was heartbreaking for everyone in the music community, any time you see such a young talent with so much potential. His mother had actually reached out and asked if we could try to do something special for the memorial. So we got together and tried to think of an idea of something that would be special for him, his family, his friends and his fans. And we came up with the idea of covering his song "Awful Things."

It was a really special experience for us. It was really heartbreaking, the whole experience, and we started looking around at a lot of young people and even just where culture has gone. All the things we, as a society, distract ourselves with or medicate ourselves with — whether it's social media, whether it's actual prescription drugs — there's all kinds of different ways for us to look in other directions other than inward, to what we're going through and what we're dealing with. It sparked an entire conversation between me, Joel and our band: Why are we here, what are we contributing and what can we do?

Perhaps it isn't clear to people, from what I just said, that Lil Peep died from an overdose. Can I ask about how you approached this? Did you approach this saying, "I want to say something about this," or how did it come about?

Joel Madden: It really started in a conversation with why. Where's the pain, where does it come from and why are we medicating. Outwardly, and at first glance, someone could say, "Oh, I'm just having a good time. This is just my drug of choice." But really what I feel, from my perspective, is they're suffering inside. They are dealing with some pain that they're not really aware of or addressing. But really where we were looking was just inside, from our own personal experience. Whereas, my pain, what haven't I been sharing.

Benji: To add to that, I think what we talked about as a band was, "Are we really honest and vulnerable with people?" Because sometimes that can be hard to do when you're stepping out and putting your feelings, thoughts and experiences out there publicly. We were asking ourselves if we had been brave enough in our career. When we went to make this record, we thought, 'What's the point for us to be here, if we're not going to be as honest as we can?'. And these are hard things to talk about. It's hard to talk about childhood trauma. It's hard to talk about depression. It's hard to talk about anxiety, or things like bipolar, borderline personalities or all the things that have been in and around people's lives that are uncomfortable for people to talk about. We thought, "I wonder if we just open up our subconscious and open up the things that we think about and hide from people everyday and just let them come out in some of these lyrics, what kind of record will we make?"

Was it was it hard to put it all down like that? Especially because it's one thing when you're teenagers — and, you know, teenagers are very emotional and enjoy sharing — but now you're adults, and you go into the grocery store. Is it hard to let people know that you have these feelings?

Joel: I think a lot of times I feel like I'm still a teenager inside. I still feel like I struggle with some of the same things I always have. I always wonder, is there anyone else?

I'm going to be 40 next year. I'm married with two kids. I'm taking my kids to school and working. We're kind of were full-time adulting now, and I go, wow, "I wonder if the way that I feel inside sometimes," I wonder if there's other people my age, with families but still dealing with those things. But I do think that everyone still has that inner-child that needs to be heard sometimes.

Were you ever worried that the audience that you most want to speak to wouldn't be interested in what you have to say anymore?

Joel: I think, in the most honest way, of course. Obviously, we started as kids, and I think Good Charlotte is kind of synonymous with youthful ideas. I do think that we've questions where do we fit into music today. I think at some point we had to just accept that we don't know, and that our best foot forward is just to be honest and to make records that we like, that we're proud of.

Benji: I also think that we can remember, very clearly, really tough mornings on the bus ride to school. We were just getting beat up by life in every direction — at home, at school. And remembering those records, that you put your headphones on and listen to, that just gave you confidence and that strength to get through the day, and go like, "I'm going to be somebody. I'm going to be something." We think about, like even if there's just one kid out there, who's maybe in the same situation, who's listening to a record ... When we're in the studio, we have that conversation and that just makes it all feel worth it, no matter what happens with the record. It's a really nice feeling.

Martin: I don't want to gloss over the fact that the two of you have been through a lot to get where you are. For people who may be just acquainted with your music now, and know you as a know famous band you know super hot band, but you've been through a lot. Your dad left you know when you were young and you kind of were really fighting the battle and you've been very open about that and I know Benji, you've been open about the fact that you had a struggle with alcohol earlier in your life. And now were in a moment, you mentioned it's not just little people but there's XXXTentacion who was who was murdered. But that that that you guys kind of came through and they didn't. And I wonder why you think it is that that you all survived circumstances that frankly defeated other people.

Benji: I think about that all the time. I think about people whose lives maybe hadn't turned out as well as me and Joel's lives and I just think it's just pure luck and the grace of God. I also think we were lucky to have each other as brothers. We made a deal when we were 16 that we were always going to stick together and never let anything come between us and we shook hands on it and we never looked back. And I think there comes a crossroads in your life when you're when you're especially I think as young men and young women who maybe don't have the guidance of a mentor or a parent — their father is not around are their mothers not able emotionally to be there or not or isn't around — you come to a crossroads where you find the you know there are times when the only reason I made a good decision is because I had my brother by my side and I wanted to be a better person and a better brother for him and make him proud. And I just think that there's a lot of these young people out here who don't have that. And I feel I was lucky I was you know born with a built-in best friend. It's really hard to do this life, to be a human being, alone.

I feel I was lucky I was you know born with a built-in best friend. It's really hard to do this life, to be a human being, alone.

It's just important to remind each other about just that we're all human and to have some compassion for each other. I don't want to sound too like zen or anything, but for me that's why it hits so hard when Peep passed away or when you know XXX passed away — all these these like these kids that you just you go, "I wish I could have been a part of their life to maybe even just influence in some positive way. And so for us it's the records. It's like all we can do is put the records out and you know we do wonder if we matter anymore. I said it to my wife the other day and then we go, "You know what, all we can do is just think about what we're putting out into the world what we can put into the world. Not really kind of what we can get out of it.