Accessibility links
'Night Moves' Captures Fleeting Moments In Chicago — And Life Jessica Hopper's memoir oscillates between charting a story of gentrification, a young woman's love affair with Chicago, and the types of friendships that represent the texture of a city. 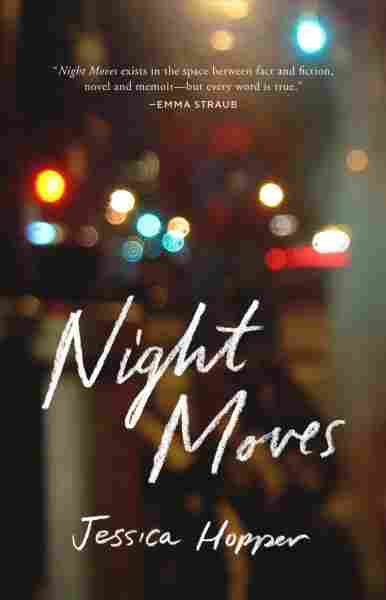 For some, there's a niggling feeling of being inside your own life that attacks you in your late 20s.

You're past your early adolescence, grounded in one place and in friendships, looking at the world around you and thinking: I am on the cusp of becoming exactly the person I am.

Meditations on this specific stage of adulthood are laced throughout music-critic Jessica Hopper's tightly-written memoir Night Moves. Though the book isn't structured with any type of chronology, the precise stage of feeling both young and old at the same time carries through the changes and growth Hopper recalls while living in an ever-changing Chicago from 2004 through 2008.

The memoir reads like a journal, each entry accompanied by a date at the very end. Despite the lack of a narrative thread connecting the entries, Hopper's accounts of the jobs she took to get by, the kinds of people she met, and the shows she went to in an era before ubiquitous cell phones resonate because of their familiarity and her humor.

Night Moves oscillates between charting a story of gentrification, Hopper's love affair with Chicago, and the types of friendships that represent the texture of a city.

The joys of these friendships, especially, is felt acutely: She writes about specific, mundane encounters with such keen observations that each moment is universal. She describes locking herself out while in her pajamas and without shoes — and shuffling over to a friend's for her spare key, hoping he will hear her despite the blaring air-conditioner. She writes about making a music video with friends — how upon entering a grocery store on rollerskates they "took off at full speed down the frozen food aisle with Ashland running behind us, made a lap through the store, and exited without being busted by the totally confounded staff." She details meeting up with Chicago friends to catch up after a trip — with a succinct summation of long-held friendships: "Same tacos for different people from the same place, many hours apart."

Alternately, the thin volume could be read as an ode to traversing a city on a bicycle, which she describes as seeing the same place repeatedly, as though it were the first time. "All the apartments illuminated with the blue glow of a TV, the living room walls gridlocked by mounted collector plates, scrubbed-clean dudes in light rinse jeans drinking beer from a can on a leather couch."

Though each of these moments — rendered with Hopper's dry humor and wit — bring a complicated city's many facets to life, it's her riffs on the life that she's participating in that give Night Moves heft.

In this vein, she recounts a drive with old friends and a comment she made that shocked them. "You are older and you think you are settled into who you are but a new city and sitch in extremis can mute you," Hopper writes. When she decides to buy a bike and travel the city mostly this way, or on foot, she says: "If I am not living my most hopeful politics at the advanced age of 29 then what am I doing?" And Hopper turns her laser gaze towards her friends, noticing that they complained about "doing stuff they didn't want to be doing, because the tide of their life and habits was taking them there."

Hopper is a keen, sharp observer who knows that it's in these tiny interactions with friends, on bikes, in bars and during late nights, that one can truly draw a portrait of a city.

But Night Moves acts as more than that. It's about a special blend of being present and feeling simultaneously nostalgic, looking at a block in any city that you love so much, and thinking of everything that's already changed and will change. It's a loss of innocence; a revelation that the stakes are not as high or as low as you previously thought they were.

And ultimately, it's a portrait of being a young woman trying to make a living from something creative, feeling hopeful and infinite about the possibilities that surround her. It's a balm, for anyone like herself. After all, it's what Hopper says to herself after reading Julie Doucet: "It's reassuring and inspiring that you don't have to be Mark Rothko — pacing and cursing and suicidal — in order to be an artist.

Mariya Karimjee is a freelance writer whose work has appeared in This American Life, LitHub and Buzzfeed. Her forthcoming memoir will be published by Spiegel & Grau.