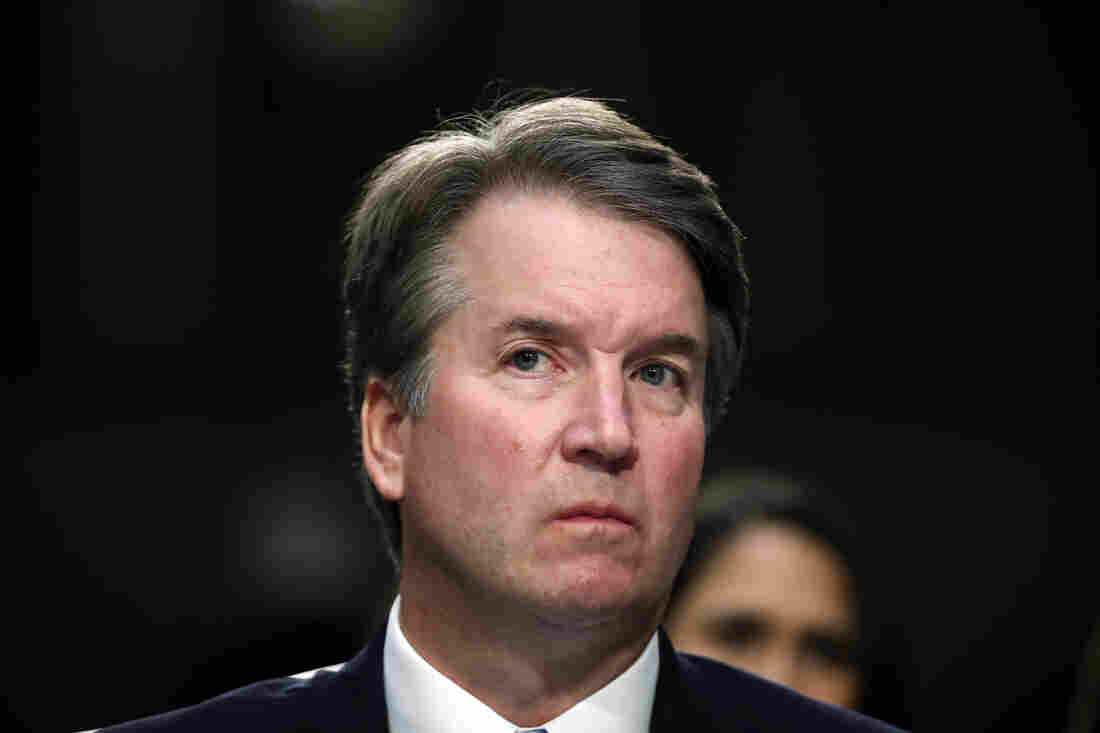 Supreme Court nominee Brett Kavanaugh during testimony before the Senate Judiciary Committee on Sept. 6. Two women have stepped forward to accuse Kavanaugh of inappropriate sexual behavior when he was a teenager. Alex Brandon/AP hide caption 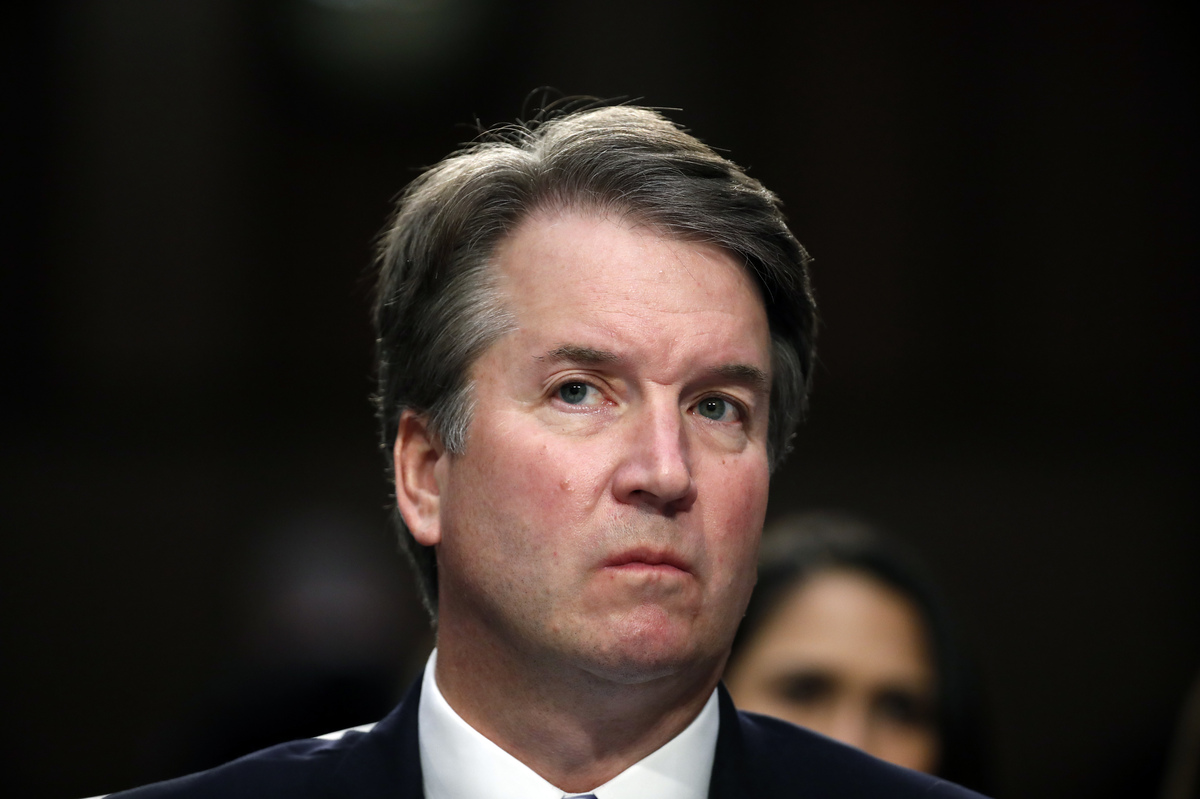 Supreme Court nominee Brett Kavanaugh during testimony before the Senate Judiciary Committee on Sept. 6. Two women have stepped forward to accuse Kavanaugh of inappropriate sexual behavior when he was a teenager.

Days before the Senate is set to hear from a woman who alleges that Supreme Court nominee Brett Kavanaugh attempted to sexually assault her while in high school, Kavanaugh is denying fresh accusations from a college classmate who also alleges he acted inappropriately toward her.

In a story published Sunday evening by The New Yorker, Deborah Ramirez says Kavanaugh exposed himself to her during a drunken party while both were first-year students at Yale University.

"It was kind of a joke," Ramirez told the magazine. "And now it's clear to me it wasn't a joke."

Kavanaugh denied the allegation in a statement released by the White House.

"This alleged event from 35 years ago did not happen," Kavanaugh said. "The people who knew me then know that this did not happen, and have said so. This is a smear, plain and simple."

The fresh allegation comes as the Senate Judiciary Committee is preparing to hear testimony from another woman, Christine Blasey Ford, who alleges that Kavanaugh sexually assaulted her at a high school party more than 30 years ago. The two incidents are alleged to have occurred within just a few years of each other.

Kavanaugh denies those allegations as well.

Ford is set to testify Thursday before the Judiciary Committee about her allegation. The politically charged hearing has already been criticized by Democrats who are calling for an FBI investigation into Kavanaugh's conduct.

"I am writing to request an immediate postponement of any further proceedings related to the nomination of Brett Kavanaugh," Feinstein wrote. "I also ask that the newest allegations of sexual misconduct be referred to the FBI for investigation, and that you join our request for the White House to direct the FBI to investigate the allegations of Christine Blasey Ford as well as these new claims."

Grassley spokesman Taylor Foy accused Democrats of withholding information about allegations for political reasons but said the committee will "attempt to evaluate these new claims."

"The committee's majority staff learned the allegations made by Deborah Ramirez about Judge Kavanaugh from this evening's New Yorker report," Foy said in an email sent to reporters on Sunday. "Neither she nor her legal representative have contacted the chairman's office. The article reports that Democratic staff were aware of these allegations, but they never informed Republican staff."

No, Senate Democrats didn’t inform us of these allegations.

The New Yorker article, co-authored by Jane Mayer and Ronan Farrow, says "Senior Republican staffers also learned of the allegation last week" without specifying whom the staffers worked for.

According to Democratic staffers, members of the committee have been fielding multiple tips about other incidents in the week since Ford's allegation became public and have been working to verify them.

One Democratic aide on the committee said senators have heard many rumors but did not have details about Ramirez's specific allegation before the story was published. Now that the story is public, it will be looked into, the aide said.

Sen. Michael Bennet, D-Colo., who is not a member of the Judiciary Committee, has been in contact with an attorney who then reached out to Ramirez, according to a spokesperson.

Democratic staffers on the Judiciary Committee who did not work for Feinstein contacted Bennet's office asking for a connection for Ramirez should she decide to come forward with allegations about Kavanaugh, the spokesperson said.

"We reached out to former Boulder District Attorney Stan Garnett who then met with Ms. Ramirez to work through how to analyze and present her allegations," the spokesperson added. "Judiciary staff reached out to our office and asked for a connection to someone who might be helpful should Deborah Ramirez decide to come forward with an allegation related to that made by Dr. Ford."

Kavanaugh was nominated by President Trump in July to fill the vacancy left by Justice Anthony Kennedy, who retired. Kennedy was frequently the court's swing vote.

Kavanaugh is considered more conservative than Kennedy, and liberals have feared that if he is confirmed, the Supreme Court will shift considerably to the right. His nomination is viewed by both parties as a critical fight ahead of the midterm elections in November.

"This 35-year-old, uncorroborated claim is the latest in a coordinated smear campaign by the Democrats designed to tear down a good man," Kupec said in a statement. "This claim is denied by all who were said to be present and is wholly inconsistent with what many women and men who knew Judge Kavanaugh at the time in college say. The White House stands firmly behind Judge Kavanaugh."

One Republican close to Kavanaugh's confirmation process who wasn't authorized to speak on the record said "there's resolve in the White House."

The source pointed to the timing, coming out after Kavanaugh's hearing and after a delay in the committee vote, adding that thus far the allegations are unsubstantiated and uncorroborated.

"The Republican viewpoint is that the left is trying to create a pattern of sexual misconduct in order to make him radioactive," the source said. "It all boils down to how Sens. [Lisa] Murkowski and [Susan] Collins perceive these allegations."

Murkowski and Collins, both Republicans, are considered relative moderates within their caucus and support abortion rights — one area in particular where the court is expected to shift further to the right.

Progressive activist groups say the latest allegation adds to their efforts to derail Kavanaugh's nomination. Brian Fallon, the executive director of the group Demand Justice, which was formed in part to oppose Trump's Supreme Court nominee, said Kavanaugh should remove his name from consideration.

"Brett Kavanaugh's history with women shows he is 100 percent unqualified to serve on the Supreme Court, and he should withdraw immediately," Carmona said in a statement. "His nomination was an affront to women from the start, and any continuation of these hearings will be seen by women as a war on survivors of sexual assault."

An earlier version of this story incorrectly stated that Sen. Michael Bennet had been in touch with Deborah Ramirez. Bennet's staffers reached out to a lawyer in Colorado, who then contacted Ramirez and now represents her.