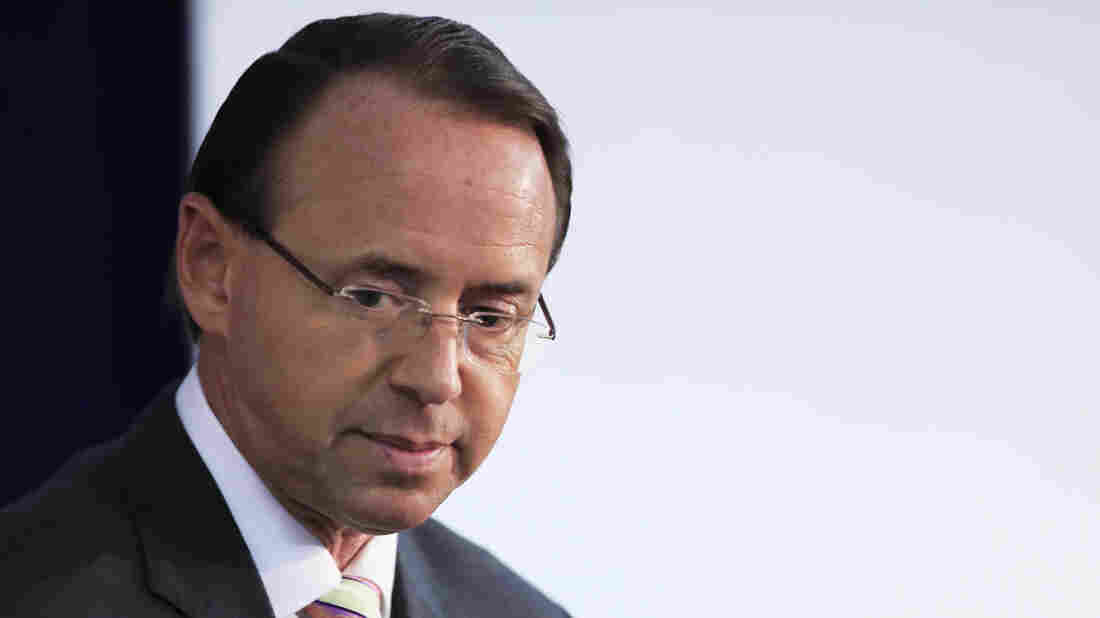 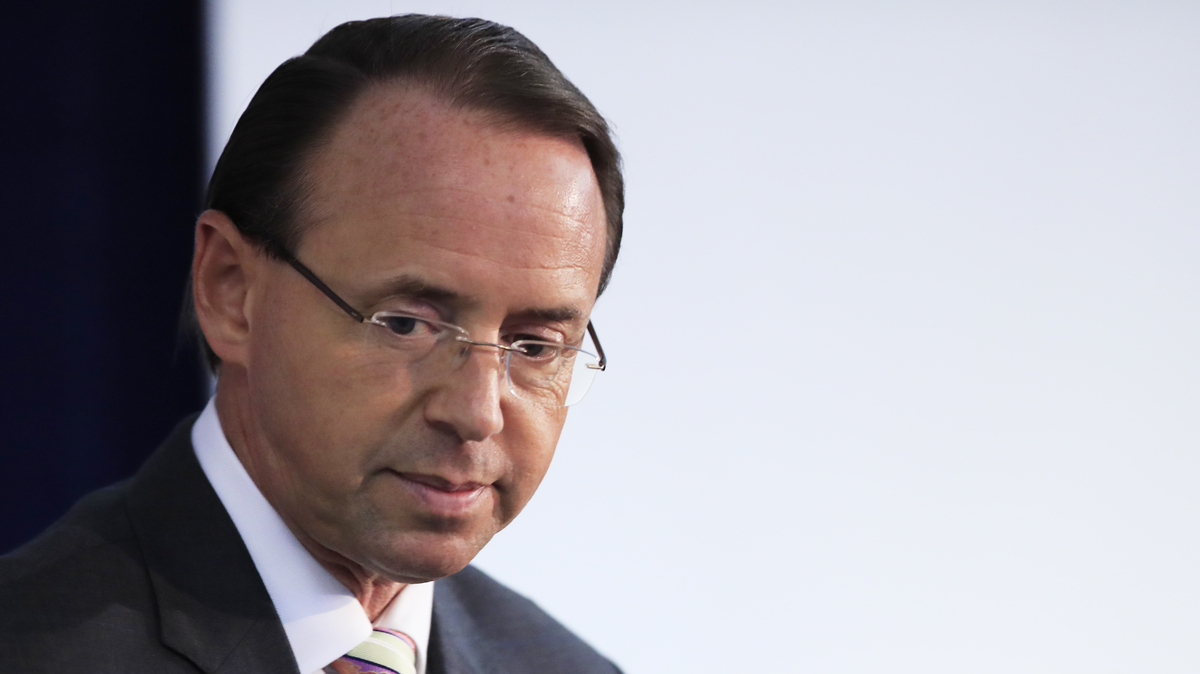 Deputy Attorney General Rod Rosenstein remained in his job on Monday afternoon after a visit to the White House that sparked a flurry of reports suggesting he might resign or be fired.

A person close to Rosenstein said he was expecting to be fired after the New York Times story on Friday about his early tenure in office. The deputy attorney general oversees the special counsel's Russia investigation, which has made Rosenstein's job security part of the long-running political battle over the probe.

For now, at least, Rosenstein keeps his job as the No. 2 official at the Justice Department. But the White House says Rosenstein will return on Thursday for another meeting with President Trump, who is currently New York City for the United Nations General Assembly.

The Russia Investigations: Rod Rosenstein On The Razor's Edge

At Rosenstein's request, he and Trump on Monday "had an extended conversation to discuss the recent news stories," White House press secretary Sarah Sanders. Rosenstein is scheduled to return for another conversation in person with the president, she said.

In New York, reporters asked Trump whether Rosenstein would be fired. He looked ahead to the Thursday sit-down, saying, "We'll be meeting in the White House and determining what's going on."

The renewed questions over Rosenstein's fate follows a report Friday in the Times that said Rosenstein discussed secretly recording Trump and enlisting other Cabinet officers to remove him from power under the 25th Amendment in the spring of 2017.

Some news organizations earlier Monday reported that Rosenstein had submitted a verbal resignation to White House officials. He may have talked about it with White House Chief of Staff John Kelly without actually committing to submit the resignation. The situation was confused and unclear.

The nature of any departure by Rosenstein is important; if he were to resign, federal law countenances Trump replacing him on an interim basis with another Senate-confirmed leader.

If Rosenstein were to make clear to Trump that he will not step down and that Trump must exert himself in order to terminate him, that makes it more complicated to install another deputy attorney general quickly.

One big immediate question that would be raised no matter how Rosenstein left the Justice Department is who would take charge of the special counsel investigation, or whether Trump might try separately to end or constrain it.

Months of political sandblasting came to a flashpoint on Friday in the Times story, which described the atmosphere of chaos inside the government after Trump fired then-FBI Director James Comey in May 2017.

As the leaders of the Justice Department scrambled to respond, Rosenstein reportedly suggested that FBI leaders interviewing to replace Comey should wear a recording device and secretly capture their conversations with the president, according to The Times.

Subsequent reports then suggested that Rosenstein was being facetious.

His statement didn't deny that he'd had the discussions, only that he never acted on whatever was discussed.

"I never pursued or authorized recording the president and any suggestion that I have ever advocated for the removal of the president is absolutely false," Rosenstein said.

Trump appears to have taken the stories seriously; he said at a political rally that there remained a "lingering stench" to be removed from the Justice Department even after all the earlier removals there.

Face of the Russia investigation

And it has been Rosenstein, in place of a reticent, camera-averse Mueller, who has conducted the major press briefings and made the visits to Capitol Hill since then.

Rosenstein also drew the ire of Trump and his allies when it emerged that he had signed the final application for surveillance on Trump's onetime junior campaign aide, Carter Page.

Rosenstein was one of two Justice Department officials who continued to request that surveillance even after Trump's inauguration, which suggested that it was yielding valid foreign intelligence.

For the president and his supporters, especially House Republicans on the judiciary, intelligence and oversight committees, that meant putting a bull's-eye on Rosenstein. Trump and his supporters argue the Justice Department has run amok with "bias" and abuse of power, which they say includes inappropriate snooping on Trump's campaign in 2016.

Rosenstein has defended himself and the work of federal law enforcement, but he has been fighting a months-long rearguard action against criticism by the president and House Republicans.

They've complained about the FBI's surveillance of Page and its use of a confidential human source in 2016, who met and talked with a few Trump campaign workers as the FBI sought to investigate the "active measures" that Russia had directed against the United States.

North Carolina Republican Rep. Mark Meadows, a staunch Trump ally who led an unsuccessful effort this summer to impeach Rosenstein, said on Monday that Rosenstein continues holding out on information that Congress needs.

Meadows said the current Republican administration of the Justice Department is as bad as he argues the Democratic one was under President Obama.

"Under Rod Rosenstein and Jeff Sessions, the Department of Justice has had just as much of a transparency problem as it did even under Eric Holder and Loretta Lynch — the bar for which is extremely low," Meadows said.

Through it all, however, Mueller's office and the Justice Department have steadily added to the tally of criminal charges involving Russian operatives or onetime close associates of Trump. Some two dozen Russians have been charged.

Trump's former longtime fixer and attorney, his onetime campaign chairman, vice chairman, national security adviser and others also have pleaded guilty or been convicted, although so far no one has been charged with conspiring directly with the Russian attack on the 2016 election.