Accessibility links
'The Shape Of The Ruins' Is Baggy, Discursive, But True At Its Core Juan Gabriel Vásquez's new novel is packed with history, alternate history and conspiracies — though ultimately it's about neither history nor politics, but how they combine to shape one man. 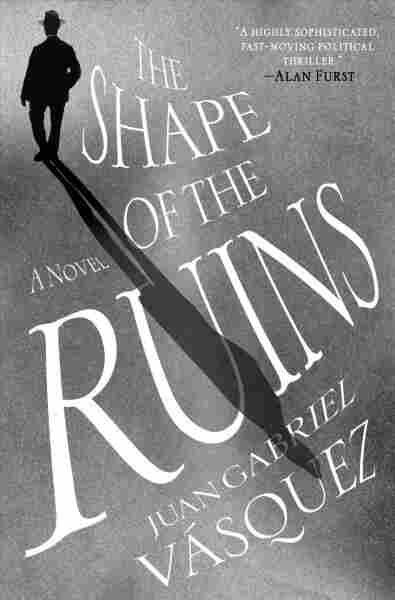 The Shape of the Ruins

Title
The Shape of the Ruins
Author
Juan Gabriel Vasquez

The Colombian novelist Juan Gabriel Vásquez resembles nobody more in his work than Philip Roth. Mid-career Roth, especially. The two share a vast array of stylistic and thematic preoccupations, and no small number of compulsions. The need to de-mythologize, for example. The desire to pick apart every impulse toward tribalism they see. The constant mining of their personal histories for the political, or the reverse. Both Roth and Vásquez like making themselves into characters, if only to trick the reader. Both like tricking readers. Most of all, they both like conspiracies.

The Shape of the Ruins is packed with history, alternate history, and a keen, mischievous sense of historical humor. The story begins with a novelist named Juan Gabriel Vásquez anxiously awaiting his twin daughters' birth in Bogotá. His wife is on bed rest, and he finds himself prowling the city, restless and ready to fall under the spell of the first storyteller he meets. At first, that storyteller seems to be Dr. Francisco Benavides, a charming and empathic doctor who happens to be the son of Colombia's greatest forensic scientist.

Dr. Benavides introduces Vásquez to his father's star student, a monomaniac named Carlos Carballo, who is as repellent as Benavides is appealing. The first time he appears in the novel, he starts spouting 9/11 conspiracy theories. Clearly, Benavides only keeps him around as a tribute, or favor, to his dead father. At first, Vásquez is horrified. (The 9/11 lecture ends with the novelist punching Carballo in the nose.) But he can't stop thinking about Carballo. Soon he understands why: the man is too good a character to pass up.

Before long, Vásquez is submitting himself to Carballo's lectures about two major Colombian political assassinations, the murders of Liberal general Rafael Uribe Uribe in 1914 and populist presidential candidate Jorge Eliécer Gaitán in 1948. The latter is Carballo's particular fixation, and his dearest dream is to persuade one of Colombia's great novelists to turn his theories about the murder into a book.

Vásquez has no interest in writing said book. He wants to write about Carballo. He wants to understand how an intelligent man descends into a whirlpool of conspiracy and distrust. He wants to know why Carballo became a conspiracy theorist rather than a scientist like his mentor. How does a person so fully exit the world of evidence? What sort of mind rejects facts? And what, exactly, is the difference between a fantasist like Carballo and a fiction writer like Vásquez? The only way to find out is to enter Carballo's world.

It's a wandering book, overall. It's discursive, digressive, baggy, often strange. It's neurotic in the extreme. Like The Plot Against America, it's what Vásquez calls "a great instrument of historical speculation," but to Roth, that speculation is the point. In The Shape of the Ruins, the historical gives way, over and over, to the personal. At its core, this is not a novel about history, or even politics. It's about how history and politics combine to shape one particular man.

The novel's many fake-outs, its resets and restarts, are worthwhile. They lead to the right place, and one that's impossible to anticipate, but feels inevitable the second it arrives.

The Shape of the Ruins might try your patience. The wandering can be a challenge, and its structure takes a long time to cohere. Though each of the novel's sub-stories echoes and influences the rest, they still feel sub-. You will still wonder when you get to return to the present day, to Vásquez and his cranky muse, and that wondering sometimes slows the book down.

In those moments, you will be thankful for Vásquez's faultless prose. Be thankful for his translator, Anne McLean, too. She's worked with Vásquez on all his official novels, and is so talented she might be psychic. In her English iteration, The Shape of the Ruins moves forward with gravitational pull. Move with it. The novel's many fake-outs, its resets and restarts, are worthwhile. They lead to the right place, and one that's impossible to anticipate, but feels inevitable the second it arrives. The ending isn't a twist, though, or some big reveal. It's an honest-to-God emotional truth. Even conspiracy theorists, it turns out, contain those.