Accessibility links
In 'Waiting For Eden,' Grief With No Guarantee Of Closure Author Elliot Ackerman is a veteran, and his latest novel is about an injured soldier just regaining consciousness. But it's really about something else. "This book really isn't about war," he says. 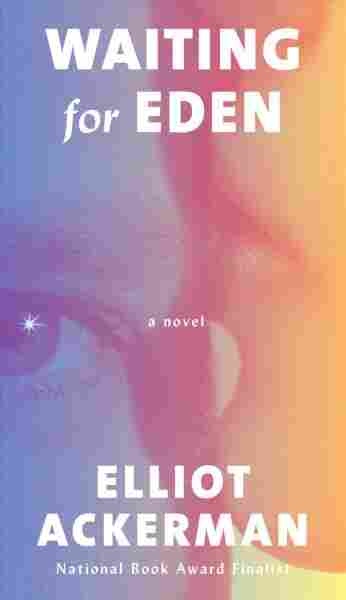 Elliot Ackerman served five tours of duty in Iraq and Afghanistan. He's now a journalist and author, sometimes drawing on his own experiences as a U.S. Marine to inspire his fiction.

His new novel, Waiting for Eden, explores the point where life is no longer worth living. Its main character, Eden, is a soldier who has been hospitalized, severely burned and unconscious, for three years. For the first time in those three years, his wife, Mary, leaves his side to spend Christmas with their young daughter, and that departure causes Eden to suffer a stroke.

"His mind, as a result of that stroke, unlocks itself," Ackerman says. "And we begin to learn about Eden's past."

It's heart-wrenching stuff, told by an unusual narrator. And as Ackerman says in an interview, he was quite emotionally invested in writing it.

It is his dead best friend, but it's somebody who was intimately involved with both Eden and with his wife. And throughout the book, his voice is trying to explain who Mary is, and ultimately the choice that Mary is asked to make. Because when Eden's mind unlocks as a result of the stroke, he becomes aware of his circumstances and is able to represent what he wants to have happen to him. And so it ultimately comes down to Mary of whether or not she's going to do it.

On the three-person dynamic at the heart of the story

This book really isn't about war. I mean, what happens to Eden is what happens in a war, and is what winds him up in that bed. But thematically, it's really a book about intimacy, and it's also about grief — which I think is a type of faith, because contained within grief is this assumption that if we make it through it, that there will be healing on the other end. I'm not sure that that healing always occurs, and when it doesn't occur, oftentimes we're left just waiting in this type of liminal state — hence the title of the book.

Reckoning With Afghanistan's Toll In 'Green On Blue'

Reckoning With Afghanistan's Toll In 'Green On Blue'

On his emotional connection to his writing

Ackerman: I'm always touching something familiar when I'm writing — you know, I'm tapping my emotions. Sometimes when I'm out talking about my books, people will say: How much of you is in these books? The reality is: All of me is in these books. I live with these books for years; they're all that I think about; they're all that I do, so they are very much me. But I think that that is in many respects what the whole part of art is, is this type of what I would term "emotional transference." And what I mean by that is ... how many times have you gone to a movie, and at the end of the movie, you've cried? ... I would say in those moments you're feeling what the artist feels. When I sit there and if I'm writing and my writing is going well, I will be feeling something as I'm putting the story down onto the page. And if I've done my job, when you are reading, you will feel something. And isn't it remarkable that you will be feeling some percentage of what I felt?

Martin: And in a sense, this is reflected in the plot, right? Eden is working for that transference — he is desperate to have people empathize with him, to understand what he is going through when he is incapable of communicating it.

Ackerman: I think that's absolutely right. And central to this book are these ideas of communication — how can we communicate with one another when all of our faculties have failed us, and how can we reconcile decisions that feel impossible when there is no good answer or bad answer.

I know lots of Marys, and I think we probably all do. The name is a very intentional choice ... you're looking at the original person [the biblical Mary] who is faithful to somebody that they love. ... Obviously, I'm a veteran as well, so I have seen how these wars and how even just trauma outside of wars can just echo and echo and echo, and how even when everyone wants to provide some closure, the people who are closest to events — the closure's never there, they're just always living with it, and they're waiting.

On the dedication to his mother

I went in and out of war many times, and she waited and my family waited for me to come back. And my mother is also a writer — her example is probably one of the key forces that set me along this path.

Ana Lucia Murillo and Reena Advani produced and edited this interview for broadcast. Patrick Jarenwattananon adapted it for the Web.