Accessibility links
Maldives Police Use Pickaxes To Destroy Artwork Deemed Un-Islamic The 20-foot-tall stainless steel cube was decorated with life-size human statues and semi-submerged in a coral lagoon. The artwork was criticized because it depicted human figures. 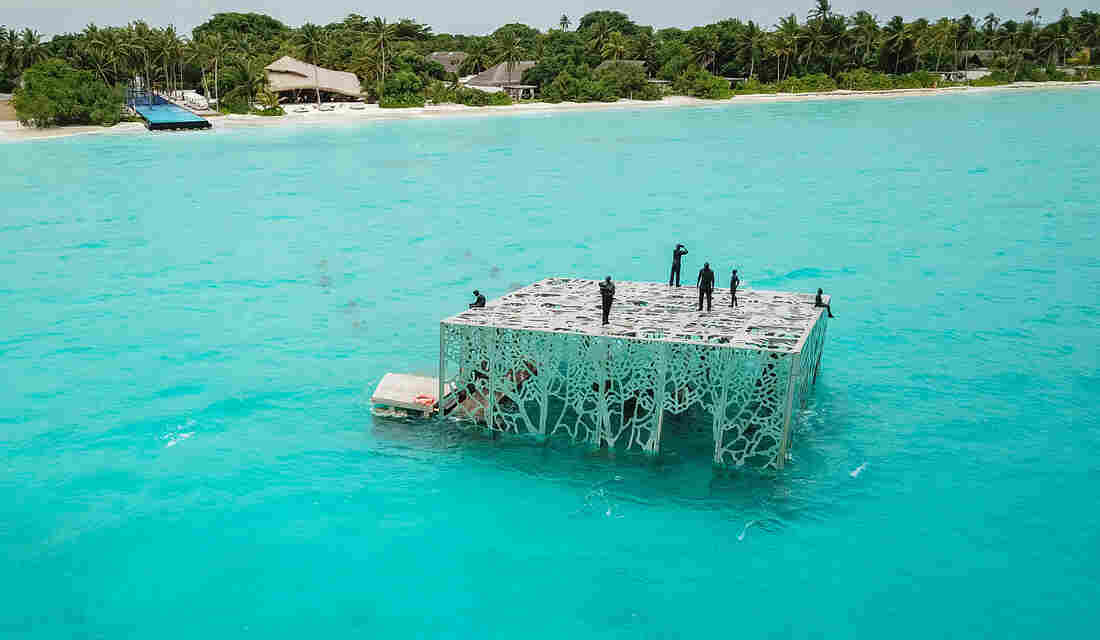 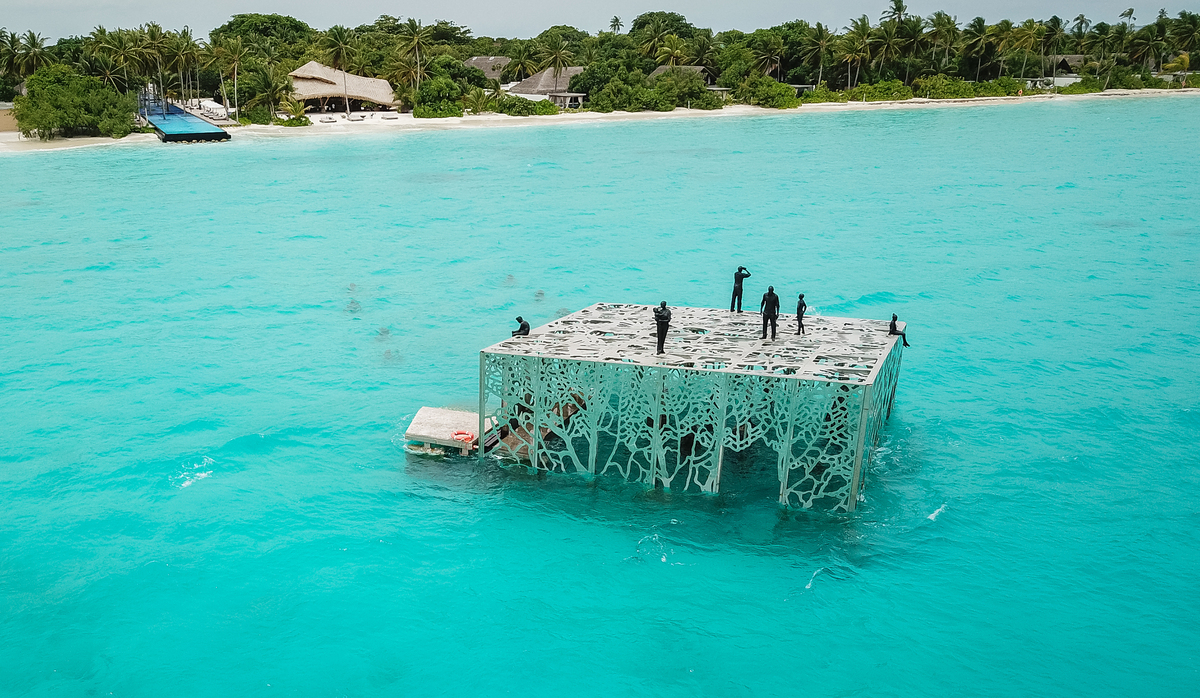 But it took the Maldivian police just a few hours to wreck it.

Acting on a court order, police used pickaxes to smash the statues on Friday. Muslim politicians, including the outgoing Maldivian president, had deemed the artwork un-Islamic because it depicted human figures.

"I was extremely shocked and heartbroken to learn that my sculptures have been destroyed," deCaires Taylor wrote on Instagram.

Famous for palm-fringed atolls and bikini-clad international tourists, the Maldives is an overwhelmingly Muslim island nation of fewer than half a million people in the Indian Ocean. In recent years, Saudi Arabia has increased its investment there, funding mosques and spreading a more orthodox and austere version of Islam.

Muslims generally avoid the depiction of human forms in art. Islam's holy book, the Quran, does not explicitly outlaw them, but it condemns idolatry.

Police reportedly sent a local Maldivian newspaper photos and video of the destruction, including one clip in which a man is heard saying, "Allahu akbar," or God is great.

DeCaires Taylor's installation, called Coralarium, debuted in July on a Maldives atoll that's home to a Fairmont luxury resort, which reportedly costs up to $3,800 a night.

The artwork immediately drew criticism from the Maldives' president, Abdulla Yameen Abdul Gayoom, who was running for re-election. He lost in the polls to an opposition lawmaker on Sunday, and has said he will step down.

In late July, Yameen issued a statement asking the country's Tourism Ministry to "facilitate" the sculpture's removal due to "significant public sentiment against the installation."

The artwork is set about 500 feet offshore. It's 20 feet tall, half underwater, with a stairway leading to the top of the cube, which is intricately cut to feature silhouettes of coral patterns. Sculptures of human forms stood atop the cube and beneath it underwater.

To reach it, tourists could snorkel, scuba dive or swim.

In a statement emailed to NPR, Fairmont Maldives said it was "very surprised by the sudden removal of eco-art pieces" but that the process was "peaceful and friendly." While some 30 statues were removed, it said the cube structure and "underwater coral boulevard" remains intact.

"We have initiated immediate plans for the next exhibit, creating a new attraction within the Coralarium gallery," the resort said.

Like many of deCaires Taylor's underwater sculptures, it was made from nonpolluting materials and designed to attract marine life — algae, shellfish and fish — and raise awareness of the fragility of coral reefs in the Indian Ocean and beyond. 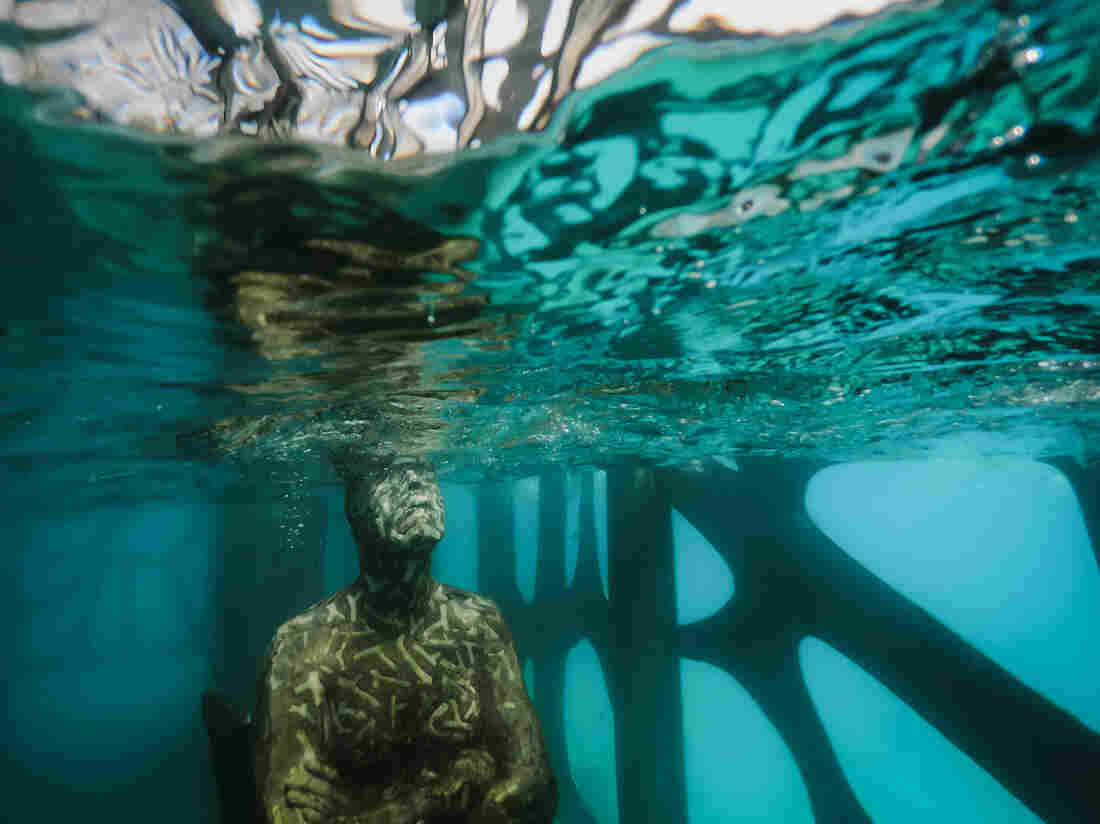 Dozens of statues in Jason deCaires Taylor's Coralarium installation in waters off the Maldives were removed, according to local media. Accor Hotels Group hide caption 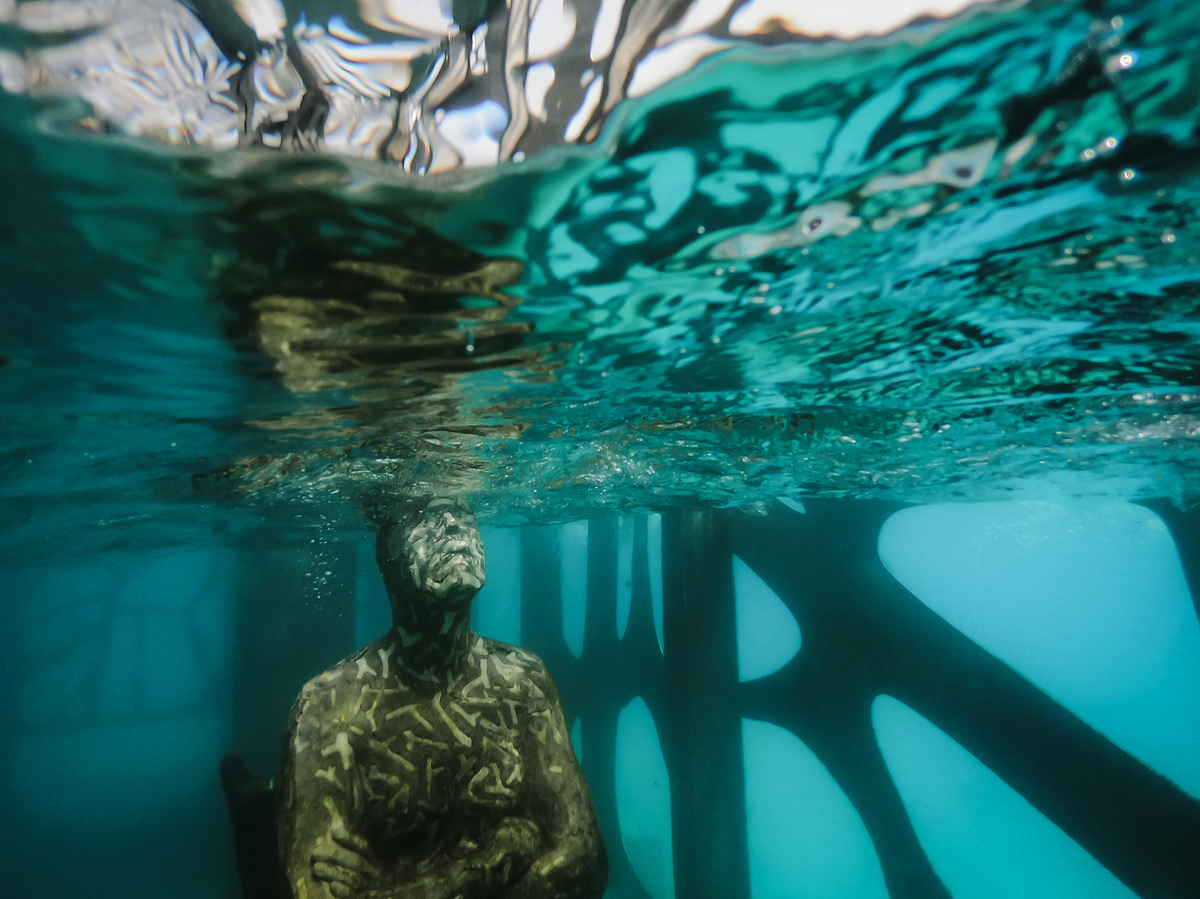 Dozens of statues in Jason deCaires Taylor's Coralarium installation in waters off the Maldives were removed, according to local media.