Accessibility links
Trump On 2nd Kavanaugh Accuser: 'Totally Inebriated And All Messed Up' Senate Republicans confirm they have hired a female attorney to question Brett Kavanaugh and his first accuser, Christine Blasey Ford, during a hearing Thursday. 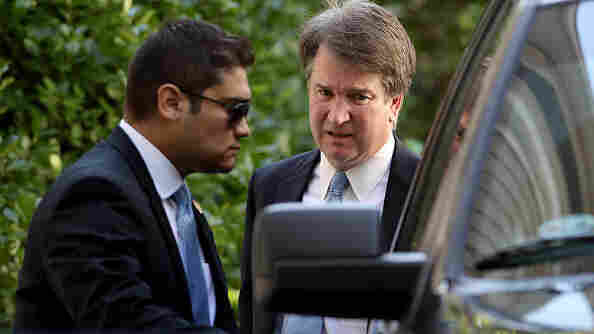 Supreme Court nominee Brett Kavanaugh is preparing to testify at a Judiciary Committee hearing on Thursday about allegations he sexually assaulted a woman in the 1980s at a high school party. Win McNamee/Getty Images hide caption 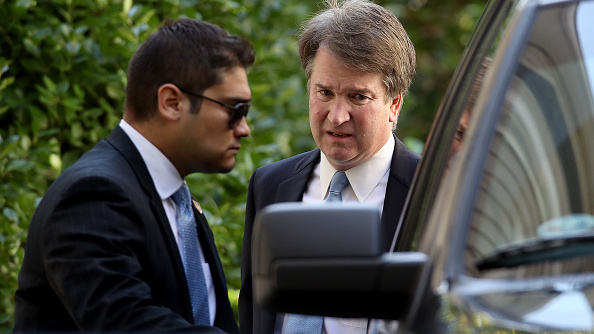 Supreme Court nominee Brett Kavanaugh is preparing to testify at a Judiciary Committee hearing on Thursday about allegations he sexually assaulted a woman in the 1980s at a high school party.

President Trump attacked Brett Kavanaugh's second accuser Tuesday, saying she "has nothing" on the Supreme Court nominee and was "totally inebriated and all messed up" during a college party at which, she said, Kavanaugh exposed himself to her.

Trump, at a photo op during his visit to the United Nations, said the accusations were part of a "con game being played by Democrats."

A woman who was a student at Yale with Kavanaugh, Deborah Ramirez, told The New Yorker that Kavanaugh exposed himself during a party the two attended there.

Mocking her account, Trump said, "She said, 'Well, it might not be him, and there were gaps,' and she said she was totally inebriated and she was all messed up and she doesn't know it was him, but it might have been him."

Trump continued, "Oh gee, let's not make him a Supreme Court judge because of that."

Trump then repeated his charge that Democrats were playing a con game, spelling "C-O-N" for emphasis.

Kavanaugh has denied Ramirez's allegation, as he has with the charge by Christine Blasey Ford that Kavanaugh groped her and tried to forcibly remove her clothes during a drunken party when they were in high school in the early 1980s.

Meanwhile, Senate Majority Leader Mitch McConnell, R-Ky., announced hiring of a "female assistant" who will conduct the questioning on the Republican side at Thursday's Senate Judiciary Committee hearing, at which Kavanaugh and Ford are appearing.

Judiciary Chairman Chuck Grassley, R-Iowa, explained the move. "We have done it because we want to depoliticize the whole process, like the Democrats politicized the Anita Hill thing. The whole purpose is to create an environment where it's what Dr. Ford has asked for — to be professional and have it not be a circus."

McConnell noted that "it's not uncommon" for staff instead of senators to pose the questions, noting that then-aide and later Sen. Fred Thompson queried witnesses during the Watergate hearings.

The top Senate Republican predicted that after this week's hearing, Kavanaugh would be confirmed by the full Senate. "I'm confident we are going to win," McConnell said, adding the vote would come "in the very near future."

Grassley has scheduled a vote of the committee on Kavanaugh's high court nomination for Friday morning, a day after the much-anticipated hearing where Ford and the federal appeals court judge are both set to testify.

Sen. Dianne Feinstein, the top Democrat on the committee, slammed the decision to schedule a vote for Friday. "For Republicans to schedule a Friday vote on Kavanaugh today, 2 days before Dr. Blasey Ford has had a chance to tell her story, is outrageous," Feinstein wrote on Twitter.

For Republicans to schedule a Friday vote on Kavanaugh today, 2 days before Dr. Blasey Ford has had a chance to tell her story, is outrageous. First Republicans demanded Dr. Blasey Ford testify immediately. Now they don’t even need to hear her before they move ahead with a vote.

Seeming to anticipate the objections of Feinstein and her fellow Democrats, Grassley explained on Twitter that he was following "regular order" in giving three days notice ahead of a possible vote on the nomination Friday: " Judic Cmte noticed POTENTIAL exec mtg for Friday. Still taking this 1 step at a time. After hrg Dr Ford & Judge Kavanaugh's testimony- if we're ready to vote, we will vote. If we aren't ready, we won't. "

Trump's characterization of Ramirez was in conflict with his press secretary's statements made hours earlier.

Appearing Tuesday morning on ABC's Good Morning America, White House spokesperson Sarah Sanders, when asked whether the White House would welcome Ramirez's testimony, responded, "Certainly, we would be open to that." Sanders added, "The president has been clear: Let them (the women accusing Kavanaugh of misconduct) speak."

In a letter to committee chairman Sen. Chuck Grassley, R-Iowa, obtained by NPR, Ford lawyer Michael R. Bromwich criticized McConnell saying he "dismissed Dr. Ford's experience as a 'smear campaign,' claiming mistakenly that the witnesses' statements to the Committee constitute 'a complete lack of evidence,' implying that there has been a thorough investigation."

In the letter, Bromwich also questioned the committee's intention to use an attorney to question Ford on Thursday, rather than the senators on the panel.

"This is not a criminal trial for which the involvement of an experienced sex crimes prosecutor would be appropriate. Neither Dr. Blasey Ford nor Judge Kavanaugh is on trial. The goal should be to develop the relevant facts, not try a case."

Republican leaders, who found themselves an awkward position because all of the GOP members of the panel are men, would not identify exactly who has been hired to question Ford.

Minority Leader Chuck Schumer made it clear that Democrats on the committee planned to ask their own questions at Thursday's hearing.

"Our senators are not afraid — as the Republicans seem to be — to confront this situation and deal with the truth," Schumer said. "They are going to do it in a careful, dignified, respectful way in an effort to find the facts."

Schumer reiterated his call for an FBI background investigation of Ford's allegations.