Accessibility links
In 'Hiking With Nietzsche,' Challenges Are Seen Through The Philosopher's Teachings John Kaag extracts ideas from Nietzsche and his followers — but also from his own experience — in this stimulating book about combating despair and complacency with searching reflection. 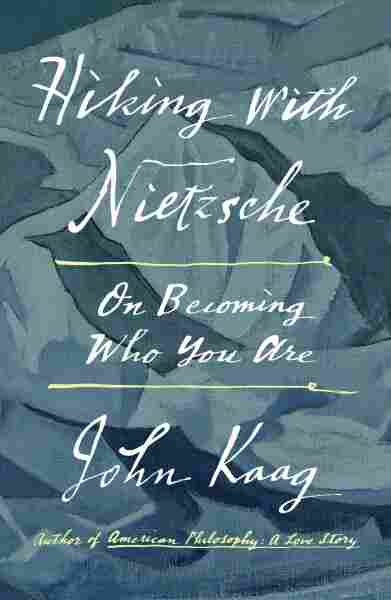 On Becoming Who You Are

Philosophy professor John Kaag's 2016 book, American Philosophy, was a heady mix of memoir and intellectual history wrapped up in a romantic story of a lost library and new love. In Hiking with Nietzsche, he tries to repeat this feat by chronicling his return — with his second wife and their toddler daughter — to the scene of his near-fatal teenage attempt to follow Nietzsche's trail and thought processes through the Swiss Alps.

His alpine scrambles, which are both physical and mental, are fascinating, if something of an uphill battle for him. Kaag's wise takeaway: "Even slipping can be instructive. Something happens not at the top, but along the way."

Like Alain de Botton, Kaag believes that philosophy can offer applicable relevance to personal dilemmas — a sort of elevated form of self-help. In American Philosophy Kaag wrote, "At its best, philosophy tries to explain why our lives, so fragile and ephemeral, might have lasting significance." In his new book, he quotes Nietzsche — "I profit from a philosopher only insofar as he can be an example" — and notes that, as a teenager, Nietzsche was drawn to Ralph Waldo Emerson's "Promethean individualism" and "experiential turn in philosophy." So, too, is Kaag.

Hiking with Nietzsche is enriched by Walter Kaufmann's nonpareil translations. (He was my college mentor in philosophy.) Fifty years ago, Kaufmann wrote, "Nietzsche is one of the few philosophers since Plato whom large numbers of intelligent people read for pleasure," but added that his impact on literature may be greater than on philosophy. Like many of the existentialist writers he influenced, including Albert Camus and Hermann Hesse, Nietzsche is much loved by brooding adolescents. But in Kaag's opinion, he is too often "pooh-poohed as juvenile" — as are his exhortations to "become who you are." Hiking with Nietzsche attempts — not altogether successfully — to push back against this marginalizing view.

As in American Philosophy, Kaag deftly intertwines sympathetic biography, accessible philosophical analysis, and self-critical autobiography. Aiming for a palatable mix, his narrative is a series of switchbacks between his family vacation in Switzerland's grand Waldhaus Hotel — a magnet for Nietzsche pilgrims like Thomas Mann, Theodor Adorno, and Hermann Hesse — and ruminations on the seminal works that Nietzsche composed during his 10 years in Sils-Maria.

Kaag notes the preponderance of philosopher-walkers besides Nietzsche: the Buddha, Socrates, Kant, Rousseau, Thoreau. "The history of philosophy is largely the history of thought in transit," he writes. His book takes us on a hike through Nietzsche's manically prolific output, which occasionally feels like a forced march but more often feels like an invigorating excursion. Scrambling up treacherous rocky inclines in worn sneakers, Kaag reflects on the peaks and valleys of Nietzsche's life and philosophy. He considers the tug between Apollonian and Dionysian impulses addressed in Nietzsche's first book, The Birth of Tragedy; Nietzsche's challenge in Thus Spoke Zarathustra "to imagine ourselves...above the societal conventions and self-imposed constraints that quietly govern modern life"; and his concept of the origin of moral values in Beyond Good and Evil, a book which Kaag's Kantian wife, Carol Hay, pronounces misogynist, hypothetical, and stupid.

Along the way, two vivid portraits emerge: the first, of the brilliant albeit often histrionic and "wrong-headed" German's descent into madness; and, the second, of Kaag, an intense insomniac who, not yet 40, has emerged as an engaging populizer of philosophy. Readers may be surprised by some of Kaag's personal revelations, including the severe anorexia that nearly killed him: "This type of self-deprivation was my first addiction — and after all these years I still remember it fondly," he writes. He also draws parallels between Nietzsche's early loss of his father to his own, noting, "My father, like Nietzsche's, went crazy when I was four. Nietzsche's died. Mine abandoned his family." Nietzsche sought an alternate father figure in composer Richard Wagner, a terrible choice which ended in serious disillusionment. Kaag sought salvation in philosophy.

Kaag refracts other personal issues through Nietzsche's writings, including the challenges of adulthood and parenting, noting the tedium, restrictions, and battles of will with a contrary toddler whom he amusingly likens to Melville's Bartleby the Scrivener. He recalls his mixed feelings over his father's pronouncements that he'd never wanted children "but that I was not always the burden he'd anticipated," and comments, "Most of my adult life has been premised on not becoming my own absent dad." Yet after a miserable excursion with his wife and daughter in a frozen, cramped gondola, he fumes with startling honesty: "Coming here with the family had been a bad idea. Before meeting Carol, I never wanted kids. Not even a little. Some days I still don't."

Kaag extracts plenty of relevant ideas from Nietzsche and his followers in this stimulating book about combating despair and complacency with searching reflection. But, interestingly, it's while watching his daughter blissfully gather woodland wildflowers or a shepherd contentedly eating a hunk of cheese while checking his flock that he experiences the most resonant moments of grace and insight.