Accessibility links
Poll On Kavanaugh Nomination: Americans Deeply Divided By Gender An NPR/PBS NewsHour/Marist poll shows a tight contest for credibility between Christine Blasey Ford and high court nominee Brett Kavanaugh. But 42 percent are unsure who is telling the truth. 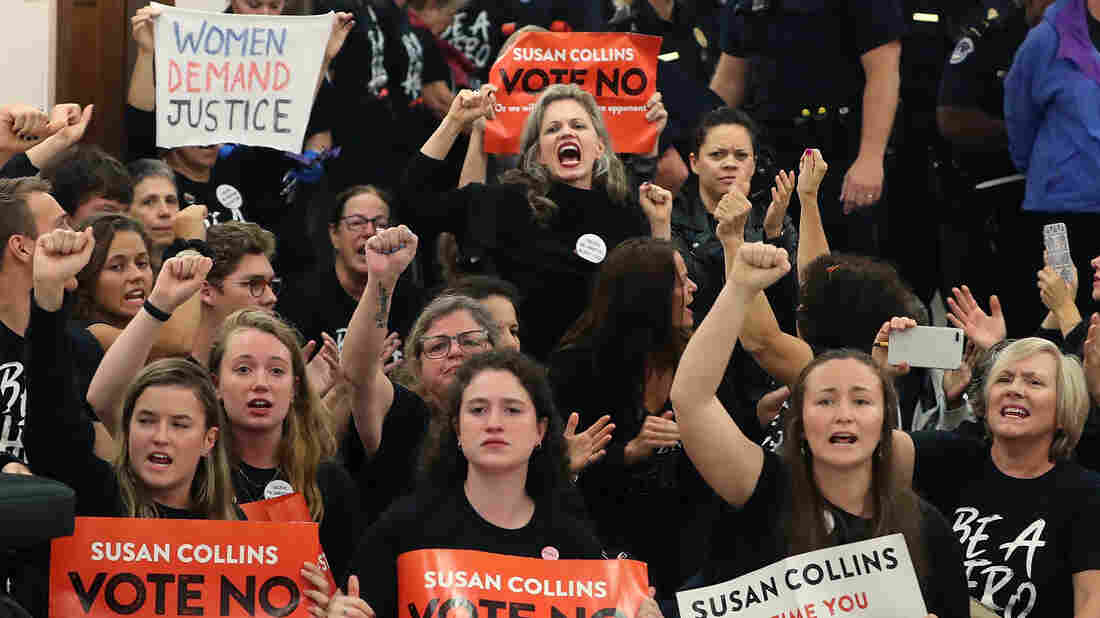 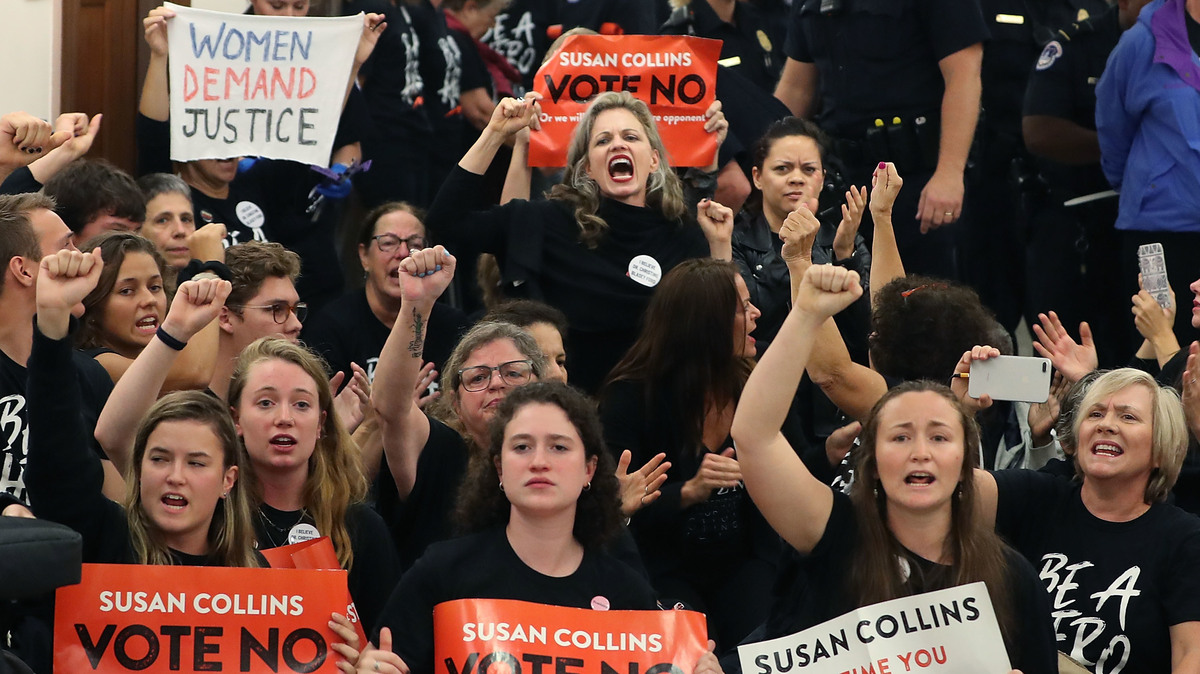 Demonstrators gather on Capitol Hill at the office of GOP Sen. Susan Collins of Maine to protest the nomination of Supreme Court nominee Judge Brett Kavanaugh.

The stakes are high for Thursday's Capitol Hill hearing, pitting Trump Supreme Court nominee Judge Brett Kavanaugh against Christine Blasey Ford, who has accused him of sexual assault — an accusation Kavanaugh has denied — when they were both in high school more than three decades ago.

A new NPR/PBS NewsHour/Marist poll finds that almost 6 in 10 Americans (58 percent) say they will be following the Senate Judiciary Committee proceeding closely or very closely. And a plurality haven't made up their minds on who is telling the truth — about a third (32 percent) believe Ford, about a quarter (26 percent) believe Kavanaugh and 42 percent are unsure who to believe.

"The jury is still out in the court of public opinion about whether Judge Kavanaugh or Dr. Ford is more believable," said Lee Miringoff, director of the Marist College Institute for Public Opinion, which conducted the poll. He added, "If they determine she's telling the truth, it's a big problem for him."

The more evenly matched credibility contest between Ford and Kavanaugh as demonstrated in Wednesday's poll seems to be a cultural shift from 1991, when an NBC/Wall Street Journal poll found that far more people believed Supreme Court nominee Clarence Thomas (40 percent) than Anita Hill (24 percent). Hill accused Thomas of sexual harassment in the workplace.

A plurality opposes Kavanaugh's nomination (43 percent oppose, 38 percent support). And an even bigger number (59 percent) thinks that if Ford's allegation is true, he shouldn't be confirmed to the nation's highest court. There have been many divisive Supreme Court nominations in recent years, but Kavanaugh's standing at this point is the worst of all of them.

Kavanaugh categorically denies the allegations leveled by Ford and Deborah Ramirez, who accused him of sexual misconduct at a college party also more than three decades ago.

"I had never sexually assaulted anyone, not in high school, not ever," Kavanaugh said on Fox News on Monday night. "I've always treated women with dignity and respect."

Kavanaugh's nomination is becoming a voting issue in November's midterm elections. More people say they are likely to vote for someone who opposes Kavanaugh's nomination than supports it by a 37 percent to 32 percent margin. A little more than a quarter (27 percent) say his nomination does not make any difference to their vote.

A majority of Republicans (54 percent) say they think Kavanaugh should be confirmed regardless of whether Ford's allegations are true, according to the poll.

More people now have an unfavorable opinion of Kavanaugh (37 percent) than a favorable one (31 percent). About a third (32 percent) have either never heard of Kavanaugh or are unsure of what they think of Trump's nominee. So, despite Republicans scheduling a possible committee vote on Kavanaugh's nomination for Friday morning, Thursday is a big test for the federal appeals court judge.

"The fact that people don't have a strong sense of who he is really makes the stakes on Thursday very high," said Barbara Carvalho, director of the Marist Poll.

Trump gets a boost, as Republicans come home

In Wednesday's poll, 87 percent of Republicans say they approve of the job Trump is doing, up from 81 percent earlier this month.

That has also helped Republicans on whom Americans prefer to control Congress. Democrats continue to lead on the question of which party's candidate people are more likely to vote for in their congressional district by 7 points, 48 percent to 41 percent. That's down from a 12-point Democratic advantage earlier this month.

Again, Republicans appear to be closing ranks — 93 percent of Republicans say they will vote for the Republican in their district, up from 88 percent.

Democrats also continue to lead with voters in the Midwest, 48 percent to 43 percent, but by a narrower margin than earlier this month, when it was 51 percent to 37 percent.