Accessibility links
'In The Moment, You Just Fly': Jon Batiste Lets Loose At The Piano Batiste, the band leader for The Late Show with Stephen Colbert, sits at the piano and demonstrates his "everything in the pot" style of playing. 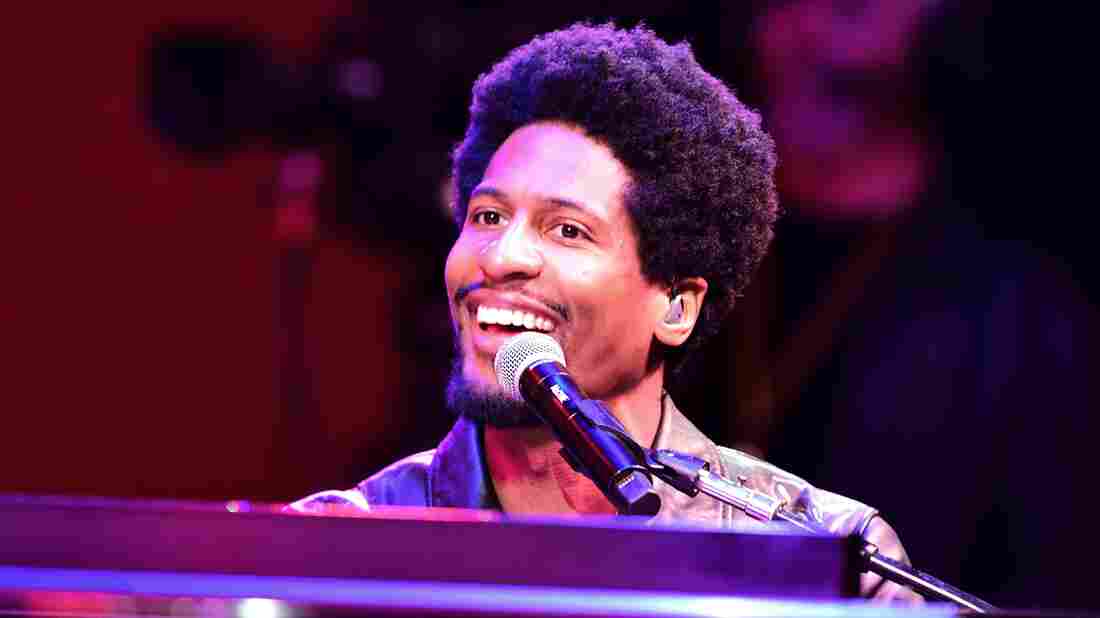 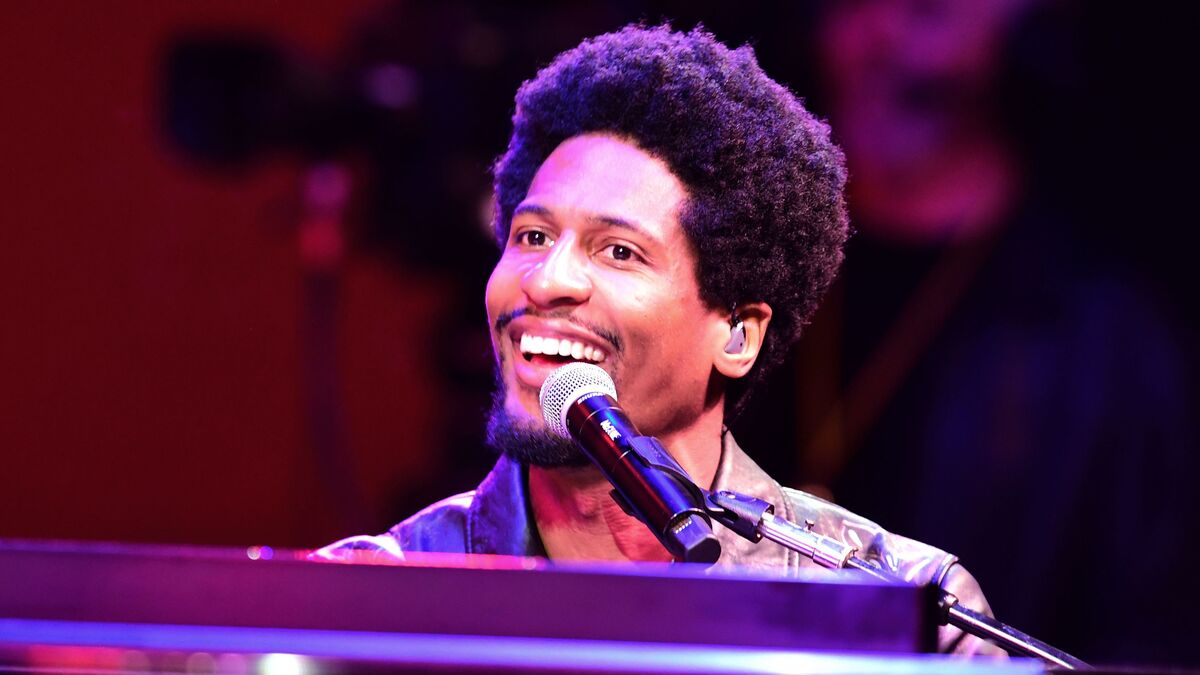 Jon Batiste performs with The Dap-Kings at the Monterey Jazz Festival in Monterey, Calif. on Sept. 22, 2018.

Music came naturally to Jon Batiste, the leader of Stay Human, the house band for The Late Show with Stephen Colbert. Growing up outside of New Orleans as part of a large musical family, he says, "I picked up on all of these things that are integral to who I am as a musician without necessarily studying them."

By the time he was 8 years old, Batiste was fronting and singing lead for his family's band. Looking back, he says, the band was "a real celebration of our family."

But after about a year, Batiste's introverted nature got the best of him. He quit singing and instead began focusing on musical instruments — first drums and percussion and then, when he was 11, piano.

Batiste developed a unique style at the piano that combines a clearly articulated touch with strong emotions. He likens his playing to making gumbo: "You put everything in the pot and in the moment, you just fly."

Batiste conducted this interview while sitting at a piano, which he used throughout this conversation to demonstrate his style and influences. Click on the audio link to hear the full Fresh Air interview and read edited highlights below.

On the rhythm that's at the heart of his music

There's an African rhythm that is at the base of much of New Orleans music and that's the bamboula rhythm and before I even understood that I was even being taught this rhythm or that I was internalizing this rhythm rather, I was. ... It's in so much of our repertoire, and me being the youngest drummer in my family at the time — there were four other drummers, my cousins, who were incredible, and still are, incredible musicians who have inspired me — and not only was I learning the bamboula, but I was learning it from them. So I had four variations of it. So by the time I started really playing and getting into the piano, I had such a rhythmic approach to it that it's still with me today.

I wanted to find something that I hadn't quite identified yet, and I was listening to a lot of albums that were made in New York. ... I would go and pick up bags and bags of CDs and I would listen to those and nerd out on who was playing on what and start to make connections and that led me to really want to go to New York to meet and collaborate with a lot of people that I had seen in the liner notes on records that I liked.

That coupled with the idea of starting my own band and really being a band leader on my own terms and defining what I wanted to say — fearlessly going out and risking failure apart from the community where everyone knew me — was what I felt I needed to do.

On initially second-guessing his own piano style

Clearness of articulation, in fact, I would say that's one of the things I ran from early on. ... I thought it was too black. In a way, my understanding of music at the time was if you have a smoother articulation, it fit more with the trend of what was going on at the time. And my touch and my tone, it didn't fit with what I was hearing in that trend. In fact, it stuck out like a sore thumb. And it was something that I was just very, very self-conscious about for a while, thinking, "Man, I sound like a blues pianist, or I sound like an older, more antiquated piano player; I'm not modern enough."

On how he developed his take on "Saint James Infirmary Blues"

You got to think of a place and you have to really put yourself in the story. My goal is to really be authentic in conveying an emotion, and for me, I have to be in a place. So I'm thinking of the harvest moon, I'm thinking of a scene that is set in New Orleans, maybe 1700s or something like that, and you really feel the urgency of what's going on when you apply that space because you're just waiting and waiting. ... It's really about the scene and then figuring out how to infuse it with the blues, because the blues feeling is such an important part of telling this story, and I love playing the blues.

On discovering the music of Thelonious Monk

One of the first songs I had ever learned was "Straight, No Chaser," so I had known of his music, but I had never checked his playing out, and wow! It was like, and this is the power of music and why I think everything is everything, we're all connected: This artist had cultivated a sound that I intuitively was reaching for 50 years before I existed. And I didn't even know that what I was reaching for had already been developed.

So at that point, you say "absorbed," I kid you not, it must've been at least for nine months to a year exclusively listening to Thelonious Monk. And you can hear it in the Live [in New York]: At the Rubin Museum [of Art] album. ... We recorded an album that year and the difference in my playing from my first album to that album, which was my second, is such a an artistic evolution and Thelonious Monk is at the center of that evolution.

On what he loves about Bach

I think that Bach is really the mysticism of music, spirituality of music, the depth of how he's able to be so systematic and logical, symmetrical at times, super symmetrical, to the point of it almost being a musical game of sorts, yet it harboring such a depth of human feeling, the range of human emotions and asking questions about the afterlife.

[Bach is] arguably the best at a thing that anyone has ever been in the history of doing a thing.

The St. Matthew Passion, I was listening to that maybe yesterday, a couple days ago. It's about three hours long and just listening to that makes you realize what's possible. He's arguably the best at a thing that anyone has ever been in the history of doing a thing.

Amy Salit and Thea Chaloner produced and edited the audio of this interview. Bridget Bentz, Molly Seavy-Nesper and Sidney Madden adapted it for the Web.