Accessibility links
Fire Ecologists Say More Fires Should Be Left To Burn. So Why Aren't They? Fire ecologists are urging forest managers to allow more wildfires to burn on the landscape to help thin overgrown forests. Many challenges stand in the way. 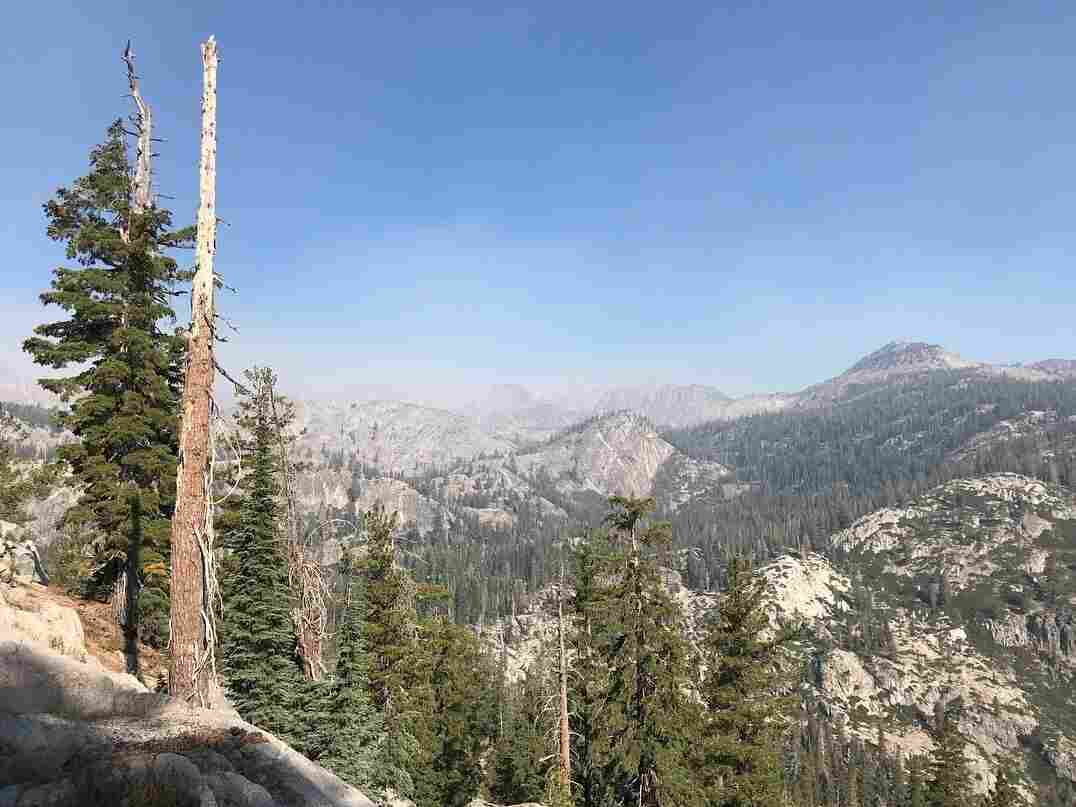 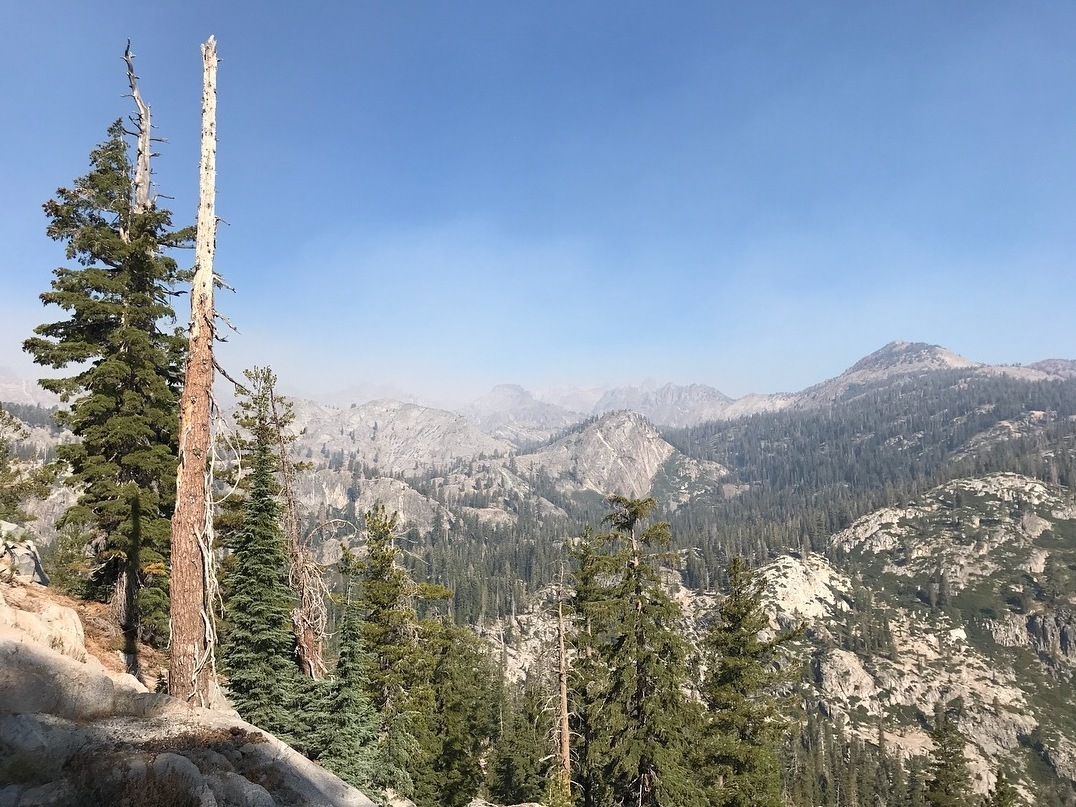 Smoke from the Lions Fire obscures granite peaks in the Sierra Nevada.

When a wildfire starts, whether by lightning or human hand, it is almost always smothered.

Firefighters and aircraft are dispatched at the first sign of smoke. Ground crews build tight containment lines, contouring where they can with the fire's edge. Helicopters douse hot spots and flames with deluges of foamy water.

Malcolm North, a fire ecologist with the U.S. Forest Service and the University of California, Davis, gets it. He once worked as a wildland firefighter himself.

The problem, he says, is that approach to wildfire is not just short-sighted, it's dangerous.

Overgrown forests, the result of a century of aggressive firefighting, are one of the biggest contributors to the types of massive, catastrophic fires that are becoming more common in much of the west.

"Every time you get one of these big fires, it is the result of 100 years of management decisions where they went and put out lightning strikes, they limited or shut down prescribed fire. And those decisions eventually accumulate and bite you in the butt," he says, between quick breaths, hiking up a rock-strewn trail in the Sierra Nevada.

Miles back, North passed a sign declaring the trail closed due to a fire ahead. The sky is a muted blue and the jagged Sierra peaks to the west are fuzzy from a haze of drifting smoke.

North is hiking towards the fire — the Lions Fire — because it's an example of a different approach. It was, for a brief moment, the rare fire that forest managers decided not to smother, but to let burn.

It's also a good example of just how difficult that decision can be.

The Lions Fire started the way a wildfire should, when lightning struck a tree-covered ridge in the Ansel Adams Wilderness, south of Yosemite National Park.

That already made it a rarity. The vast majority of wildfires, 84 percent, are human-caused.

It also made the fire an opportunity.

The Forest Service has been talking about letting more naturally-caused wildfires burn for decades. There's a recognition that wildfire is part of the landscape across much of America. Forests evolved with fire. They depend on it.

The area the Lions Fire was burning hadn't burned in a long time, and there were indications that fire was needed. Half of the trees in the surrounding forest were already dead, killed by beetles. A windstorm, years earlier, had downed thousands of trees to the east of the fire, creating a jumbled mess on the forest floor.

For forest managers like Denise Tolmie, a district ranger in the Sierra National Forest, the Lions Fire seemed like an opportunity to restore some health to the forest. 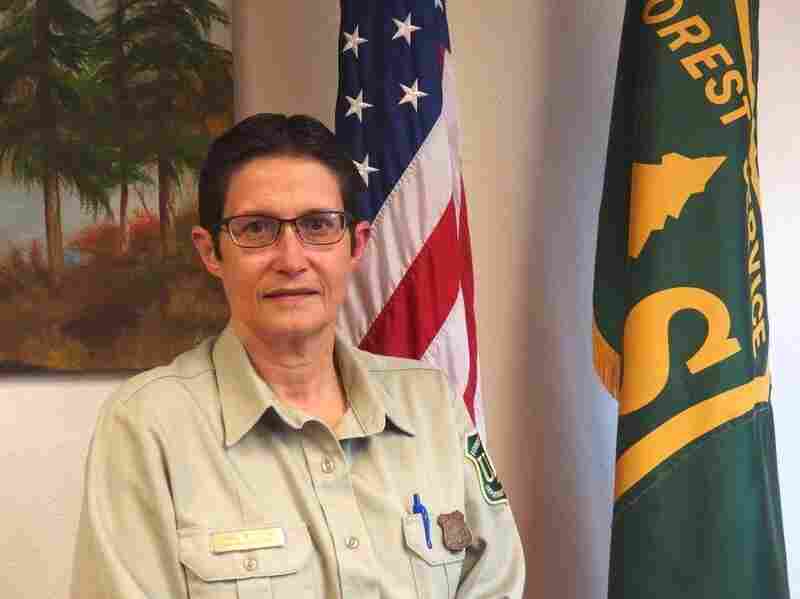 Denise Tolmie, a district ranger on the Sierra National Forest, says she believes that fire needs to be part of the forests she manages, but a fire has to fit in a "very, very tight window," to not be suppressed. Courtesy of Denise Tolmie, USFS. hide caption 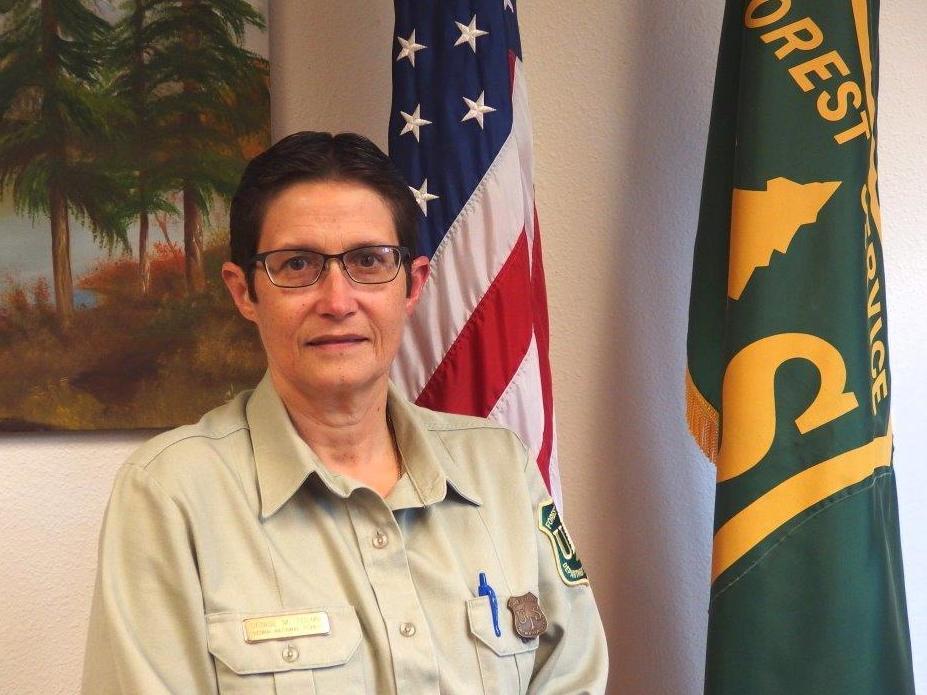 Denise Tolmie, a district ranger on the Sierra National Forest, says she believes that fire needs to be part of the forests she manages, but a fire has to fit in a "very, very tight window," to not be suppressed.

It checked all of the boxes.

It started naturally, early in the season. It was far away from people and property. It was in an area that had seen fire historically but hadn't burned in some time.

"Initially we said, 'Yup. This fire is in a good place,'" Tolmie says. "Can we have positive effects from the fire? Yes we can."

So the Forest Service allowed the fire to burn over a 2,000 acre area, she says. Fire crews were sent in to make sure the fire stayed in that area, but they didn't go with the goal of stamping out every flame. They were there to manage the fire, not fight it.

This decision is incredibly rare.

The Forest Service stopped counting how many fires it and other agencies manage this way in 2009, as part of a larger policy change. From the years 1998 to 2008 though, the last with data, less than half of one percent — 0.4 percent — of all ignitions in the U.S. were allowed to burn. The rest were put out.

The Lions Fire would be no different.

A stump burns in a swirl of flame on the eastern edge of the Lions Fire. Smoke rises from downed logs and stump holes under a canopy of tall trees.

The forest is quiet, apart from the occasional crack or pop of wood and flame.

"It almost seems peaceful," North says. "It's kind of nice."

The Lions Fire is burning through this area at a low-intensity, slowly creeping through pine needles, branches and brush on the forest floor.

Historically, North says, a lot of the forests in the Sierras saw fire like this about every 20 years. For the last century, the Forest Service has been aggressively putting those fires out.

But the conifers didn't stop dropping needles. Trees didn't stop growing or falling down. Without fire, that vegetation has built up over time.

North looks at that accumulation as a debt that society, someday, is going to have to pay off.

"Every time you put a fire out, you're just postponing it. You're just kicking the can down the road," he says. "And not only are you postponing it, but you just increase the actual fuel load that is out there, so when it does happen you get these massive megafire events." 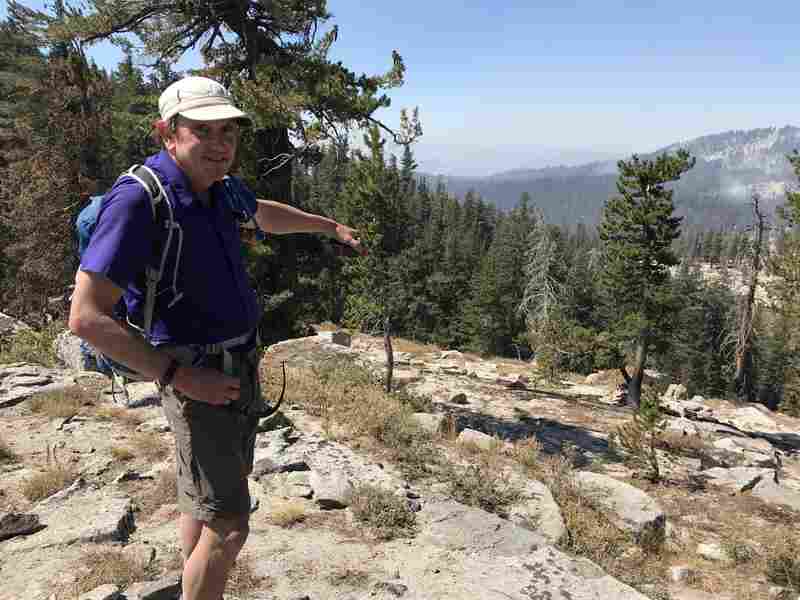 Fire ecologist Malcolm North looks down at the still-burning Lions Fire from a ridge in the Sierra Nevadas. Nathan Rott/NPR hide caption 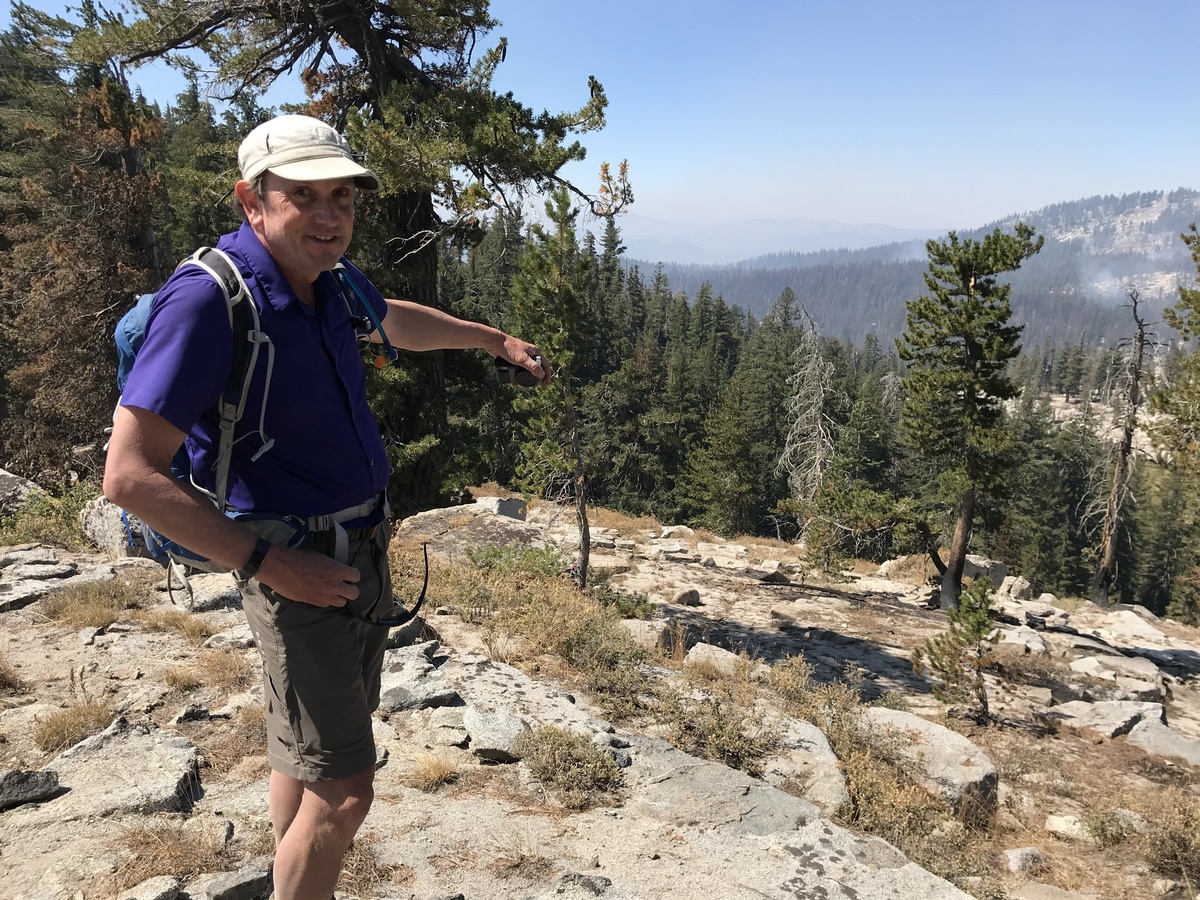 Fire ecologist Malcolm North looks down at the still-burning Lions Fire from a ridge in the Sierra Nevadas.

Climate change is another major contributor to the those types of fires. And the effects of it are only expected to worsen the problem going forward.

But there has been more political attention on the issue of overgrown forests of late.

The Trump administration is calling for more 'active' logging and thinning in western forests. The goal is to reduce fire risk and jump-start resource-dependent economies in parts of the rural west.

There are logistical challenges to doing that though. The Lions Fire, for example, is burning in the wilderness, an area where mechanical thinning or logging is prohibited.

"We can't thin our way out of this," North says.

Prescribed fire needs to be utilized more often, he says, and more fires need to be allowed to burn.

A couple of days after forest managers decided to let the Lions Fire burn, a weather event brought high winds to the area. The fire jumped from a couple dozen acres to over 1,000 overnight, expanding beyond the area in which forest managers wanted to keep it.

With the change in conditions, management of the fire changed too. Helicopters went in to douse the flames. Fire crews came in by aircraft to stop the fire's spread. It was now being fully suppressed.

That was welcome news to the residents of Mammoth Lakes, a resort ski town about seven miles from where the fire was burning.

For weeks, smoke from the Lions Fire had inundated the town, driving away tourists and vacation home owners.

"Nature has to do its thing, but there comes a point where it gets too close for comfort," says Cruz Jonathan Valleflores, who works at a local car rental agency. "Tourism is a huge part of this community, so if tourism doesn't come through, there's no money. There's no jobs."

Those concerns were shared by many in the community. Some wrote angry op-eds in the local newspaper. Others vented their frustrations on social media.

"We are all angry about the smoke," says John Wentworth, a town councilman. "But personally, I know there's no future in denial. There's no future in just saying, 'put out every fire that you see,' because that's just going to put money in the bank for the big one that's going to come here and burn us to the ground." 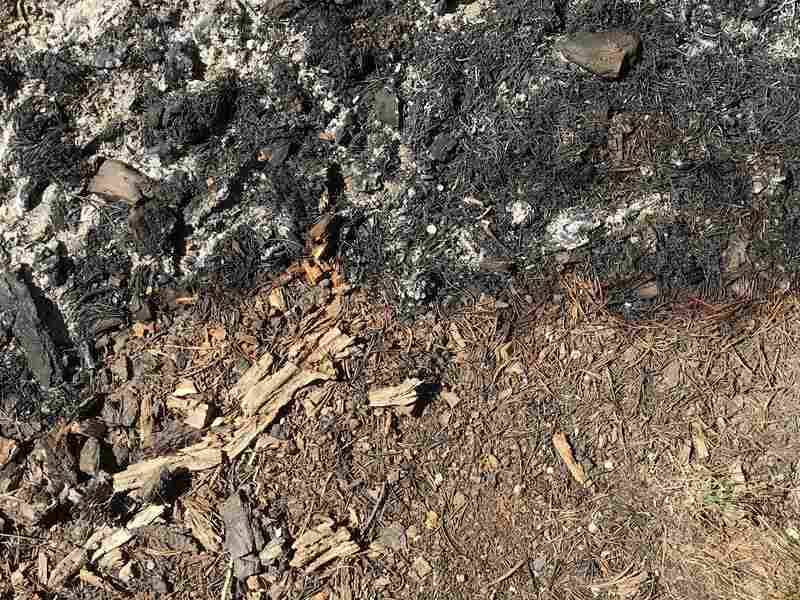 A section of the Lions Fire creeps through the duff on the forest floor, consuming pine needles and downed vegetation. Nathan Rott/NPR hide caption 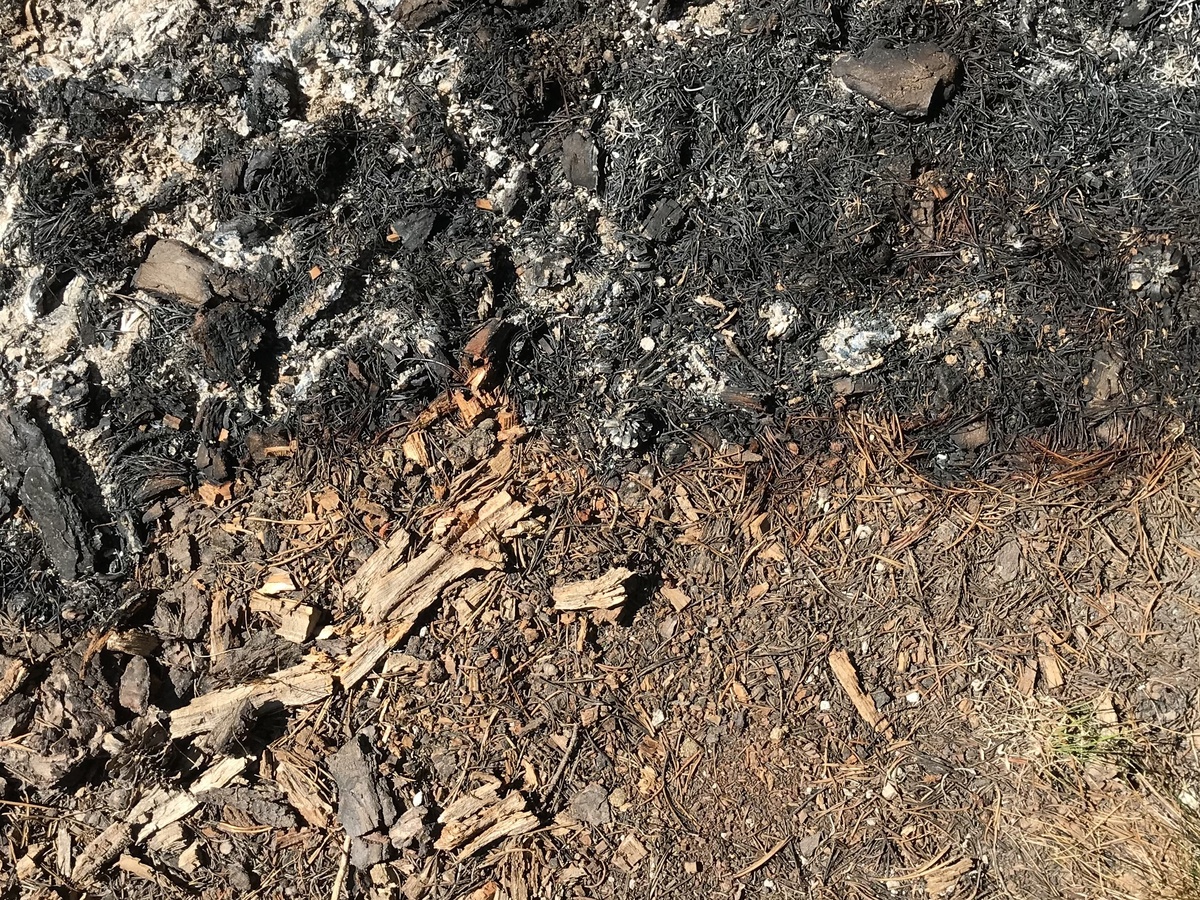 A section of the Lions Fire creeps through the duff on the forest floor, consuming pine needles and downed vegetation.

North was disappointed with the decision to suppress the fire.

He understands why it was made, but he points to a section of forest floor in the still-smoldering Lions Fire. The pine needles and branches are gone, replaced by a layer of black ash.

"These are the fire effects you want to see," he says. "High-severity catastrophic fire — it's going to be a lot harder for that to happen here."