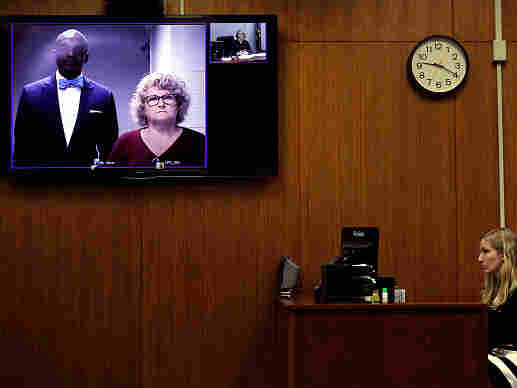 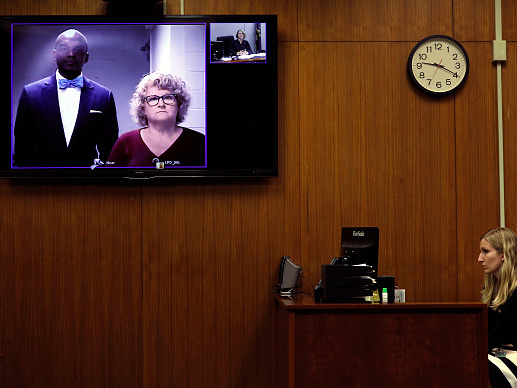 Ex-Michigan State University women's gymnastics coach Kathie Klages appears with her attorney Takura Nyamfukudza at a video arraignment after turning herself in to police in August.

Michigan State University continues to deal with the fallout from employing one of the most prolific serial sexual predators of the modern era. On Thursday, a judge will decide if there is enough evidence to send ex-MSU gymnastics coach Kathie Klages to trial on charges of lying to law enforcement during its investigation into Larry Nassar.

This is just part of an investigation into how Nassar, a former MSU sports doctor, was able to sexually assault young patients for decades. In January, more than 100 women spoke against him for about a week at his sentencing in Ingham County, Mich.

Since January, an investigation by an independent, special prosecutor appointed by the Michigan attorney general has loomed over the university. The investigation has thus far involved interviewing more than 500 survivors, parents, guardians, significant others and MSU staff and faculty members. The special prosecutor's team has also delved into thousands of pages of documents — a portion of which are still being reviewed by a judge to determine whether they are protected by attorney-client privilege or another privilege.

Klages is the second person to be criminally charged during the investigation.

In March, Nassar's former boss and MSU dean, William Strampel, was charged with multiple crimes, including sexual assault and neglect of duty for allegedly failing to oversee Nassar after an internal investigation in 2014. A Title IX report at the time said Nassar was a liability and "is exposing patients to unnecessary trauma based on the possibility of perceived inappropriate sexual misconduct."

According to court documents, after that report, Strampel claimed to implement protocols for Nassar in order to protect patients and prevent further abuse. Those protocols included having a person in the room for certain procedures and making sure there was little to no skin-to-skin contact between Nassar and the sensitive regions of patients.

But, the prosecutor says, Strampel failed to enforce these protocols and allowed Nassar to continue to assault new victims until he was fired two years later.

Klages' charges are more recent. She faces a misdemeanor and a felony charge and is accused of lying to law enforcement during their investigation into Nassar. According to the court record, prosecutors say Klages denied being told by any gymnast that Nassar assaulted them or did things that made them feel uncomfortable. But two women who were teenagers in 1997 say they disclosed those things to Klages.

At her arraignment, Klages' attorney, Takura Nyamfukudza, implied that the charges against Klages might be politically motivated because Attorney General Bill Schuette is the Republican candidate for governor.

"I think for the [attorney general], Larry Nassar and anyone associated to him is the gift that keeps on giving," Nyamfukudza told reporters outside Judge Louise Alderson's courtroom. "And I think the timing is very interesting."

Nyamfukudza went on to say, "Her name will be cleared, I'm confident of that."

The attorney general's office denies any political motive for the charges against Klages or the investigation.

The investigation continues to be "open and ongoing," Bitely repeatedly tells reporters.

"We are still actively investigating everything that we believe led to what happened at Michigan State being allowed to happen," Bitely said.

As for Michigan State, the university says it has cooperated with the investigation every step of the way. The administration also says it has been doing an internal examination of policies and procedures.

The university has done some structural reorganizing of departments and colleges and has expanded the school's mental health services.

Guerrant said there's a desire in the university to have the investigation wrapped up and know what the special prosecutor finds. But she said the university will continue to have conversations about sexual assault and similar topics for years.

"You owe it to any survivor that comes forward to take claims seriously and to investigate and to look into it. And that is owed to everyone," said Guerrant. "And sometimes that also means you need to re-evaluate your policies internally and make sure that people know that, in coming forward, their claims are going to be listened to and investigated."