Accessibility links
Europe's Copyright Reforms Are More Than (Just) A Boring Policy Change Two weeks ago, the European Commission approved new rules that will change how tech companies are required to deal with copyright infringement on their platforms. Unsurprisingly, it was controversial. 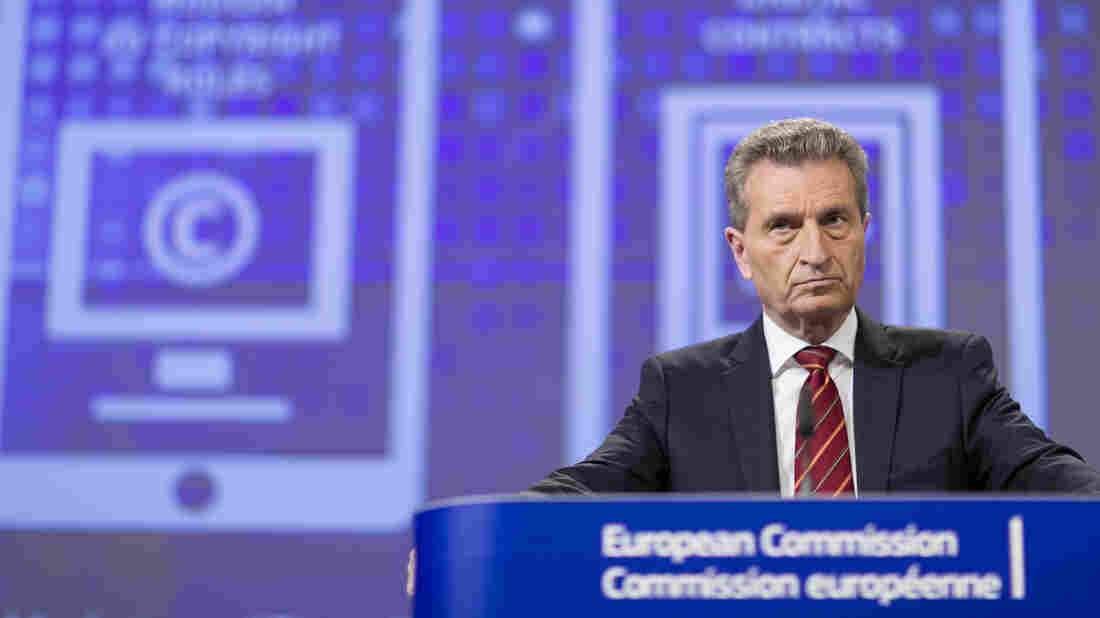 Günther Oettinger, commissioner of the digital single market for the European Union, in a presentation on copyright reform on December 9, 2015 in Brussels. Thierry Monasse/Corbis via Getty Images hide caption 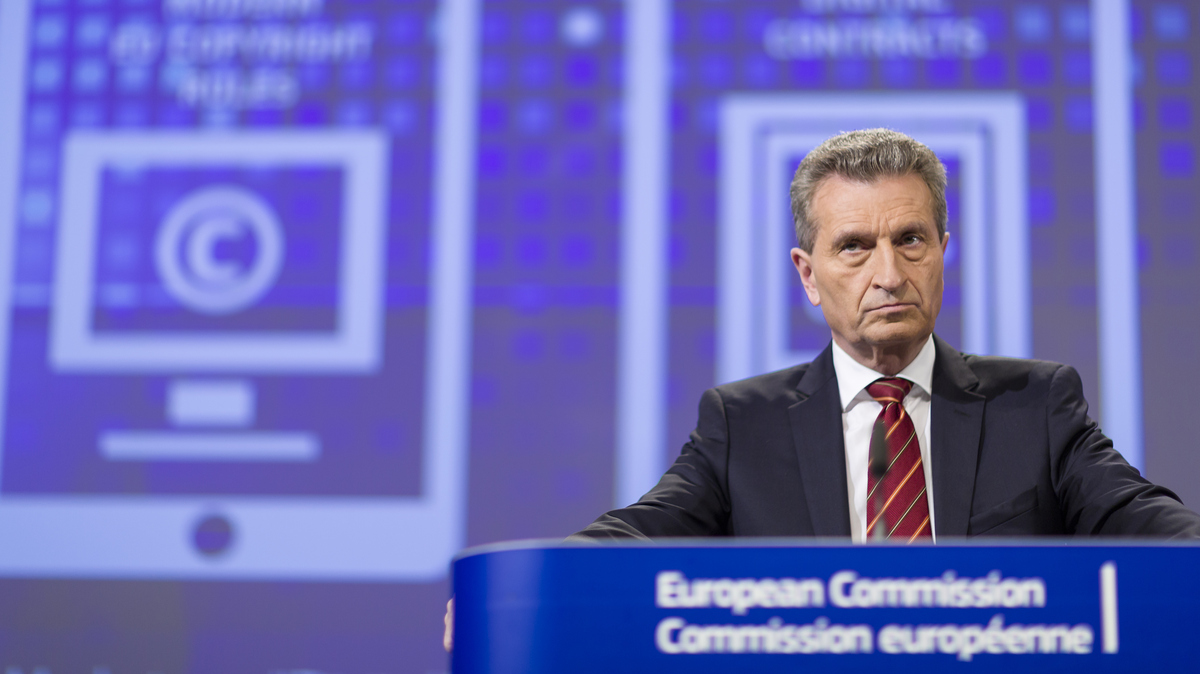 Günther Oettinger, commissioner of the digital single market for the European Union, in a presentation on copyright reform on December 9, 2015 in Brussels.

Earlier this month, British pianist James Rhodes received a notification from Facebook. A short video he had recorded and uploaded of himself playing a passage of Bach's Partita No. 1 had been flagged by Facebook's copyright identification system as belonging to Sony Music, resulting in 47 of the video's 71 seconds being muted.

Of course, Bach has been dead for some time now — 268 years, but who's counting — and his compositions have been public property longer than any of us have been alive.

Recordings of those compositions, however, do not belong to the public, and Facebook had confused Rhodes' performance with one owned by Sony. (Speaking to NPR, Rhodes confessed a hope that his recording was confused with one from a notable player, at the very least.) If you consider what is asked of big tech's copyright-protection efforts, the mix-up wasn't entirely unreasonable. Facebook's identification system exists to prevent copyrighted material from being used — particularly in videos — in ways its owners might object to. As with its analogues on other platforms like YouTube and SoundCloud, the technology uses "fingerprints" of copyrighted material — movies, television and music, but not just — to police users' uploads to the platform. These filters compare the contours and cartographies of each file's data and if they match the "fingerprint" of copywritten material, the owner is notified.

It took about five days for those 47 seconds of Rhodes' recording to eventually be unmuted, and only after he launched a campaign to call attention to the mistake. The tones and timbres of pianos are all broadly similar, and even though the breadth of possible interpretations of a composer's work is wide, it's not inconceivable that one player's would sound deceptively like another's, especially if, instead of listening deeply, one was cursorily scanning code-based refractions of the recordings' idiosyncrasies for similarities.

None of this is exactly new. Two years ago, the well-known producer Four Tet criticized SoundCloud for what he took to be an overbearing takedown of his work (in that case, his official remix of another artist's song). YouTube's own system, called Content ID, has had a similarly spotty history. In July, when Facebook flagged the Declaration of Independence as hate speech, a Facebook spokesperson explained: "We process millions of reports each week, and sometimes we get things wrong." (Facebook declined to comment when asked about the muting of Rhodes' upload.)

Companies like Facebook and YouTube don't monitor their networks for copyright infringement out of an abundance of feeling for creators, or the people they pay to manage their works (labels, publishing companies, managers and so on). They do so to protect themselves under the good graces of "safe harbor," a legal provision that shields Facebook and YouTube and other companies similarly situated from legal liability over the things their users upload to their servers. Companies that host user-uploaded content are spared from being legally on the hook if those users post things that don't belong to them, as long as those companies make a reasonable effort to tamp down on those posts or uploads. The relative imprecision of the language establishing safe harbor — particularly in the U.S. — as well as the stipulation that copyright owners are responsible for requesting takedowns has lent these companies a fairly large umbrella under which to shield themselves from a shower of lawsuits. It might lead to other benefits as well. Some record labels assert that, in the case of YouTube, the rule has allowed the company an unfair high ground in negotiations with them.

On Sept. 14, the European Commission (E.C.), the legislative core of the European Union (E.U.), took a major step toward attempting to fix that situation, which is viewed as imbalanced by some (mainly copyright holders and their advocates) and as existentially necessary by others (companies like YouTube). The Commission voted to approve a directive containing a slew of extremely controversial new rules around how tech companies who operate in the E.U. are required to police content uploaded to their servers.

The rules — which will only take effect once the European Union's 28 member states each ratify them independently — will require companies to continue monitoring those services for infringement. But removing these infringements speedily will now be required by law, and removes the requirement that copyright owners need to report that their work was posted without their permission, placing that responsibility instead on the platforms themselves. The new policy also requires tech companies to provide content creators with transparency as to how their copyright-protection systems work. (As it stands right now, it's not even clear what criteria must be met in order to use YouTube's Content ID system.)

"The proposal solely addresses the services as they are the ones distributing the content and, most importantly, making a profit out of it," the Commission explains on a question-and-answer page. "The measures taken by the services and agreements concluded by them with rights holders would benefit the users, which can upload their content with more confidence that the relevant rights are respected." What that means, essentially, is that if you post a video of yourself dancing to a song, that post is on the up-and-up, legally. At least, that's the idea, since the law so strongly encourages these platforms to reach reasonable agreements with copyright owners.

And so, of course, a controversy.

Cory Doctorow, a co-founder of the popular blog Boing Boing and vocal critic of copyright law, characterized the effect of the E.C.'s vote as the continent having "lost the Internet" in a post for the Electronic Frontier Foundation, a tech advocacy organization. Doctorow concluded that the directive's passage signals bureaucrats' misplaced confidence in technologies like Content ID, and that the policy will stifle the open Internet and hurt individual creators by forcing them to fend for themselves. (Which, it could be argued, they are doing currently anyways.) In a blog post written before the directive's passage, YouTube chief business officer Robert Kyncl delivered an ultimatum of sorts: the directive could "potentially undermine [YouTube's] creative economy, discouraging or even prohibiting platforms from hosting user-generated content."

On the other side of this debate is Helen Smith, executive chair of the Independent Music Companies Association, who asserted in an op-ed for Politico that its effect would be the opposite. Smith believes that tech companies' hegemony gives them unfair leverage in business negotiations, and that with the new rules — particularly the directive's preference for companies to reach licensing agreements with creators and pay them fairly — "artists will have a say and capture more revenue no matter how big they are or where they come from."

The directive could have the effect of increasing the number of erroneous takedowns such as the one experienced by Rhodes, since technology companies now have a more dramatic incentive to ratchet up the policing of copyright infringement on their platforms. Trolls could misuse reporting systems. But the new rules also come packaged with much broader implications for the interplay of art, commerce and fandom on digital spaces whose doors are open for public sharing. There's no good answer, and no magic technology, that will equally please creators, the tech companies who profit from those creators' creations and the corporations that have decades of experience doing the same.

In the "Information Wants To Be Free" corner, you have advocates like Cory Doctorow, who is of the opinion that regulations on the Internet can have a stifling effect on freedom of expression. They want to preserve the web "as a place where we can fight the other fights" like "inequality, antitrust, race and gender, speech and democratic legitimacy," as Doctorow put it in a recent podcast. (Doctorow obliquely references a 2004 copyright dispute around Woody Guthrie's "This Land Is Your Land," which Guthrie, in an unconfirmed statement, said he didn't "give a dern" if others performed.) Doctorow's point is that creativity is best when it's unanchored from profit motive, and thus available to be copied freely. (Doctorow himself walks the walk, making his novels available for no charge.) James Rhodes' recent experience with music that wasn't even protected by copyright isn't exactly encouraging in this regard.

Meanwhile, some copyright holders are very much interested in being paid for their creations. Lisa Alter, a visiting professor at Yale Law School and practicing attorney who specializes in music copyright, tells NPR: "Obviously, whenever there's something new, there will be a period of time where systems are worked out and glitches, but I don't see those insurmountable in the year 2018." As to situations like the one Rhodes experienced with his Bach video? "Could there ever be a erroneous takedown? Sure, but then you let them know and they should put it back up," she says. "But I don't see it being an epidemic. And the technology will get better, the filtering system will improve."

And somewhere else entirely you have creators, a group so varied in approach and purpose and motivation that it's ludicrous to try and divine their desires in even the broadest sense. Some want to make things and give them away. Some want to make things and use those things to make money. But all have the same thing in common that most everyone else does: A reliance on both technology and the law, and a significant hill to climb to affect either in any meaningful way.