Accessibility links
Putting On Kathy Acker's Voice In Perfect, Agonizing 'Crudo' Olivia Laing's first novel is semi-autobiographical, but written in the voice of the late literary provocateur Kathy Acker. There's no reason for the choice — but the result is breathlessly gripping. 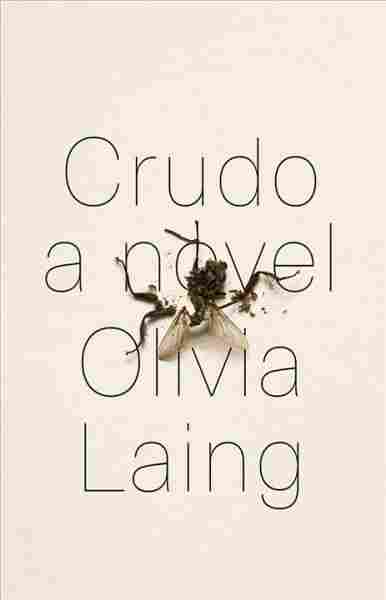 Last year, the British critic and memoirist Olivia Laing wrote in a review of After Kathy Acker that Acker's punk novels, her body of work, were impossible to imitate. "Radical and uncanny," Laing wrote, "entirely inimitable, a smash and grab on the history of literature." The review came out in The Guardian last August, when Laing was in the middle of writing her exceptional first novel Crudo, a what-I-did-last-summer in Kathy Acker's voice.

Sort of. The character is nominally Kathy Acker, but her life is Olivia Laing's. The best way to put this might be that Crudo is a memoir in drag. We get the outer trappings of Kathy Acker — her dead, dysfunctional mother; her breast cancer; her body of work — but Crudo starts in 2017, when Acker has been dead for twenty years, and the character's daily life and inner landscape are pure Laing.

She offers no reason for her choice of costume. (Beyond, I have to imagine, her love for Acker's work.) You just have to roll with it — consider it a price of admission to a novel so breathless and gripping that it offers no reason for doubt. I gladly trust Laing when she writes, "Kathy, by which I mean I." She repeats that phrase, as if to say, Work with me. We both know I'm not Kathy Acker. I'm Olivia Laing, author of The Lonely City, and that I got married last summer while writing Crudo at breakneck speed.

The novel feels breakneck, a bit of a smash and grab itself. Raw, per the title. The plot is bare-bones and barely relevant: Kathy — I'm still calling her Kathy — goes on vacation, then gets married. Meanwhile, Donald Trump bickers with Kim Jong-Un, neo-Nazis march in Charlottesville, and Britain prepares for its exit from the European Union.

'Lonely City' Is More Than A Cry For Connection

Crudo is a news novel, and a Twitter novel, and a historical-record novel. (More on that later.) It's a romantic comedy, in that it ends with a wedding. The prose is extravagantly beautiful, like the dahlia-filled garden where Kathy and her husband sunbathe naked. It's also exceptionally funny. Laing is expert at bathos, British understatement, dry desperation. "Human relations," Kathy asks, "how." The question emerges from neurosis, but swells to become what she calls the real question of existence: "If it was happening to someone, it being unspeakable violence, how could she be happy?"

But Kathy is happy. She's thrilled to get married, looking at her husband over the registrar's book and thinking, "No one could possibly be so nice." (To American readers, nice is a flat, dumb little word, but in England, there could be no fuller, warmer praise.) Crudo's moments of pure love are like this: matter-of-fact, prosaic, perfect. My favorite is a day Kathy and her husband decide to see no one. Their new table arrives, "that was exciting, they sat on the sofa waiting for it like people in line for a movie." Later, they exchange new vows: "I vow to wash up more, I vow to be less of a dick."

But Kathy's still anxious. She's addicted to the Internet, terrified of the news. Crudo starts at the deadly Grenfell Tower fire, encompasses James Comey and Charlottesville, ends with threats of nuclear war. This is fiction as documentation. It traps the first summer of Trump and Brexit like a fly in amber. In an essay for Literary Hub, Laing explained that she "knew the summer of 2017...would be written about by historians in the future, acquiring a shape and coherence it absolutely didn't possess at the time. It was the messy moment itself I wanted to record."

'Crudo' is a news novel, and a Twitter novel, and the first successful Trump novel.

As a record, Crudo is perfect, and agonizing. Laing describes Kathy's distress, her panic, her dodges and cowardice. There's a brutally accurate list of might-as-wells: if the world is ending, Kathy "might as well have chicken for Lauren's birthday and file a review, she might as well continue with her small and cultivated life, pick the dahlias, stake the ones that had fallen down." Because Laing writes about picking dahlias, because she admits the pleasures of the life we know is her own, she never runs the risk of hypocrisy. We know the novel's few claims of truth come from a writer as baffled as we are.

Crudo's lone political truth is borrowed from the painter Philip Guston, who wrote that "the only reason to be an artist [is] to escape, to bear witness to all this." The statement informs the whole book. No artist can know how big a contribution she's making, but she can know what role to play. The witness, the record-keeper. That line gives Crudo the strength to soldier on.

So does marriage. Kathy returns to New York sure that she's in true, lasting love. That's a big statement for a character as neurotic and change-fearing as she is, and she makes it through a metaphor once removed. She's alone at Heathrow, worrying about nukes, and thinks, "Still, ants at least would proceed, building up their infinite cities, stealing honey from the cupboards. She held on to her bag. She loved him, she loved him." Love: as stable, as indestructible, as ants. Even the real Kathy Acker could believe in that.