Accessibility links
An Unlikely Pair Share A Moment That Goes Beyond Politics At an anti-Trump rally in 2016, a Muslim student there protesting tried to help a Trump supporter who was being taunted by some attendees angry he was there. 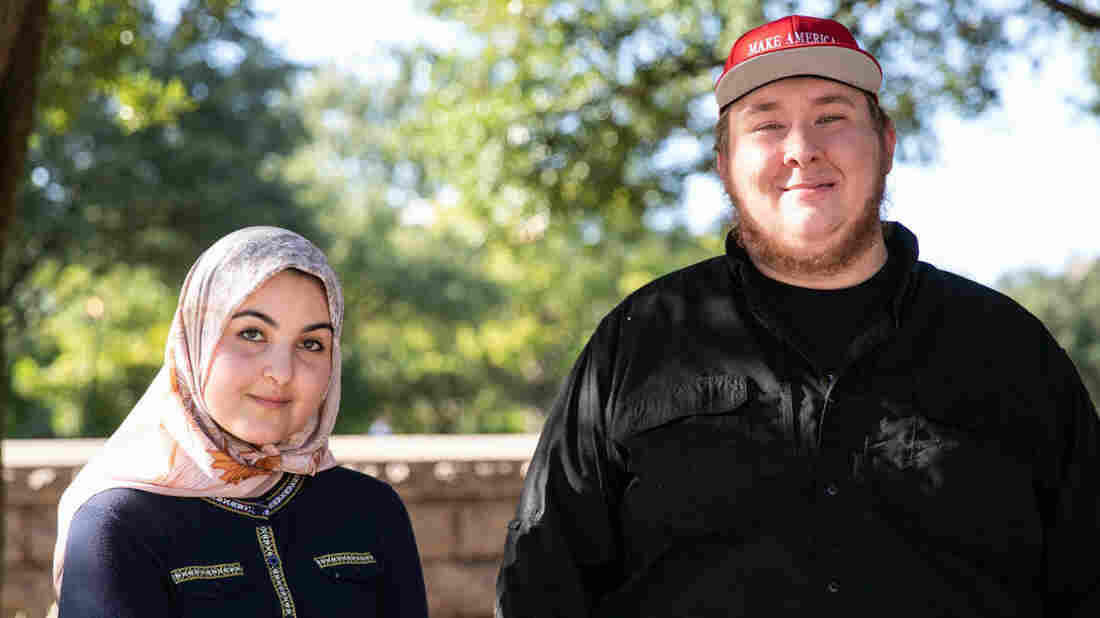 Amina Amdeen and Joseph Weidknecht encourage others to have conversations with people who may not share their political views. Catalin Abagiu/StoryCorps hide caption 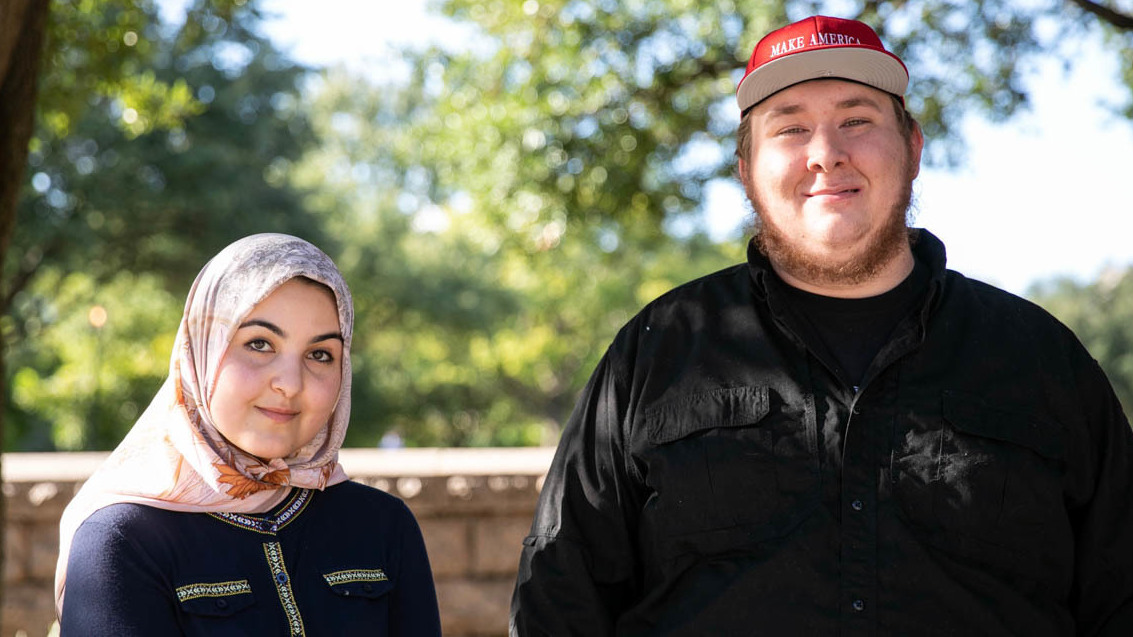 Amina Amdeen and Joseph Weidknecht encourage others to have conversations with people who may not share their political views.

This story is part of a new StoryCorps project called One Small Step, an effort to bring Americans with differing political views together — not to argue politics, but to get to know one another as human beings.

Amina Amdeen, a Muslim student at the University of Texas, protested outside of the Texas State Capitol building. Joseph Weidknecht showed up with pro-Trump signs and a Make America Great Again hat.

At StoryCorps, they remember the moment that brought them together.

The people surrounding him were wearing masks, she says.

Weidknecht, now 26, who went to the rally by himself, was one of the few Trump supporters in attendance.

"I heard a click of a lighter right behind my ear, and there were about three people trying to light my shirt on fire with lighters," Weidknecht says.

"And then somebody snatched your hat off your head," Amdeen says. "And that's the point where ... something kind of snapped inside of me because I wear a Muslim hijab, and I've been in situations where people have tried to snatch it off my head. And I rushed towards you and I just started screaming 'Leave him alone! Give me that back!' "

Though Amdeen was unsuccessful in retrieving the hat, Weidknecht says he was grateful that she stepped in to defend him.

"I don't think we could be any further apart as people, and yet, it was just kinda like this common 'that's not OK' moment," Weidknecht says.

Police arrested one person involved in the altercation with Weidknecht. Others were also arrested at the rally for other offenses, though for the most part, the protest were peaceful.

"You are genuinely the only Muslim person I know. It's not that I've actively avoided, it's just, I've just never been in the position where I can interact for an extended period of time," Weidknecht says.

Up until meeting Amdeen, Weidknecht says his view of the Muslim community was influenced by news articles.

"I feel like a lot of times in the media you don't see the normal Muslims, the ones who listen to classic rock, like I do. You don't meet that Muslim," Amdeen says.

In One Small Step interviews, StoryCorps encourages people with differing political views to learn about the person behind the political label, and so Weidknecht asks her to tell him about herself.

"I was born in Baghdad, Iraq. I moved to the U.S. when I was 10 years old," she says. "Being a Muslim girl, I stood out in almost every single way that you can, in middle school, the worst time to stand out."

Weidknecht says that having been home-schooled, he can relate.

"It was a vastly different experience [than most people]. Socially, I didn't have I guess as many friends as most people would," he says.

He says he has lost friends since the election because of some of his political views. "So I hope that I can be the reason that someone decides to talk to someone as opposed to just cutting them out of their life, or blocking them on Twitter," he says.

"I'd like for this to encourage other people to engage in more conversations with people that you don't agree with," Amdeen says.

"That's what it is all about," Weidknecht says. "I'm so glad I wasn't the only one who felt like that."