Accessibility links
Brett Kavanaugh Offers Fiery Defense In Hearing That Was A National Cultural Moment Christine Blasey Ford and Brett Kavanaugh each gave riveting testimony in the daylong hearing called to look into Ford's accusation that Kavanaugh sexually assaulted her when both were teenagers. 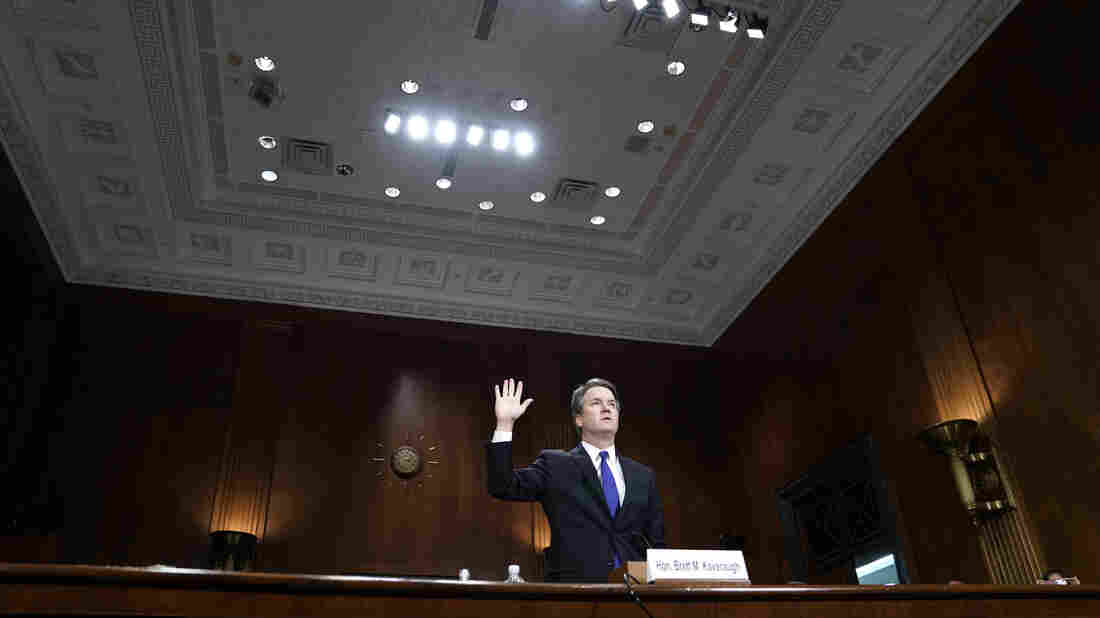 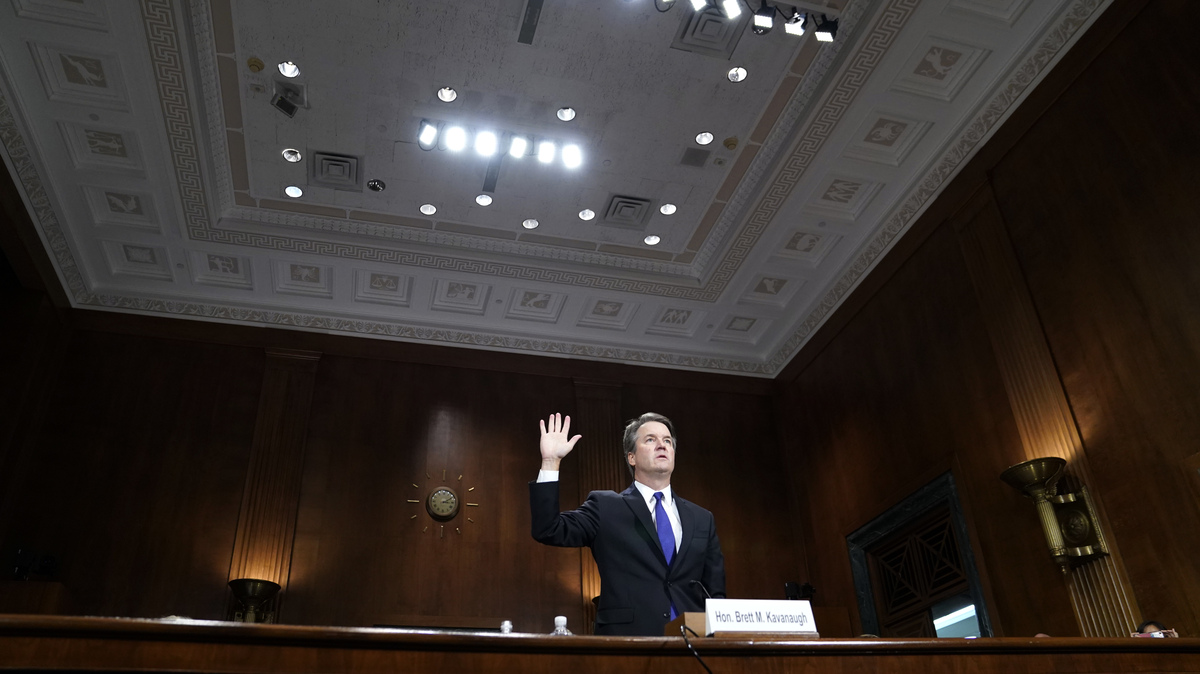 Across the country, Americans were transfixed Thursday by television coverage of Christine Blasey Ford and Brett Kavanaugh as they testified before the Senate Judiciary Committee. Ford spoke of her allegation that the Supreme Court nominee had sexually assaulted her when they were teenagers in 1982. Kavanaugh vehemently denied it.

Such was the drama that President Trump put off a scheduled meeting with Deputy Attorney General Rod Rosenstein, with the White House issuing a statement that the president "spoke with Rod Rosenstein ... and they plan to meet next week. They do not want to do anything to interfere with the hearing."

After hours of emotional testimony and sometimes fiery rhetoric, the day ended with a presidential tweet. Trump praised Kavanaugh, calling the federal appeals court judge's testimony "powerful, honest, and riveting." While Trump's comment was meant as a positive review of his nominee's testimony, it also served as a succinct headline for the entire proceeding.

The next step comes Friday when the Judiciary Committee is expected to vote on Kavanaugh's nomination to the Supreme Court.

Here are four takeaways from the hearing:

1. A cultural, historical and legal moment

Since the allegations of sexual misconduct against Kavanaugh were first reported in the media in recent weeks, comparisons with the 1991 Clarence Thomas-Anita Hill hearings have been everywhere. The hearing Thursday delivered even more fodder for the conversation.

At the start of the hearing with Ford, Sen. Dianne Feinstein recounted how 27 years ago she was passing through an airport when she "saw a large group of people gathered around a TV to listen to Anita Hill tell her story." At the time Feinstein was a former mayor. Today she is the top Democrat on the Judiciary Committee. In 1992, she was one of a record number of women elected in Congress in the "year of the woman." 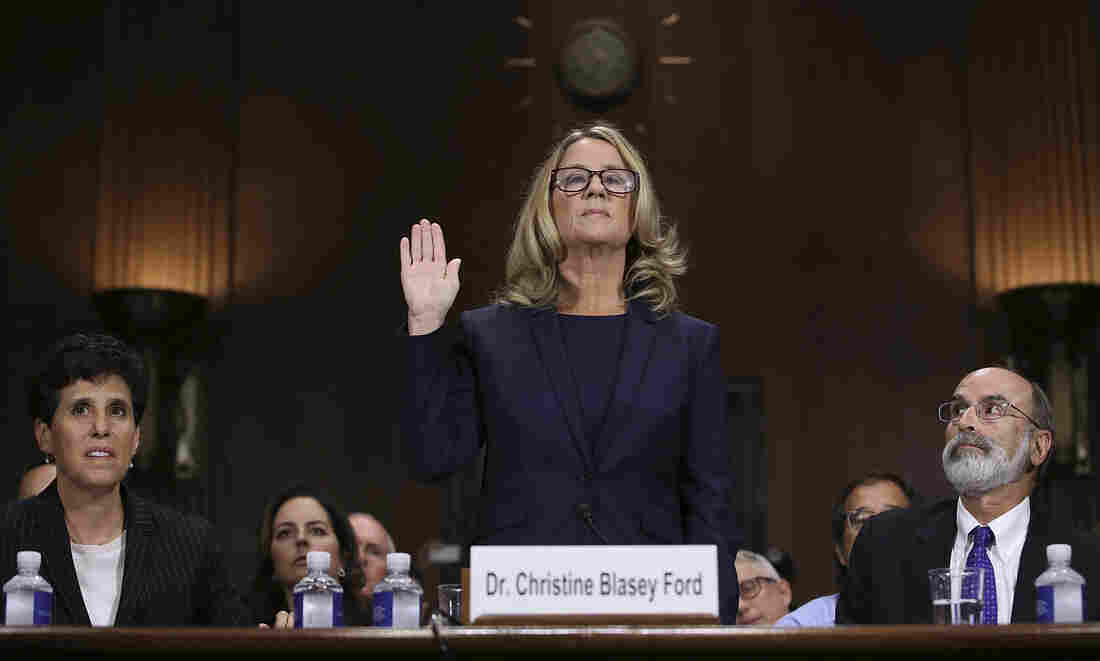 Christine Blasey Ford is sworn in before the Senate panel on Thursday. Win McNamee/AP hide caption 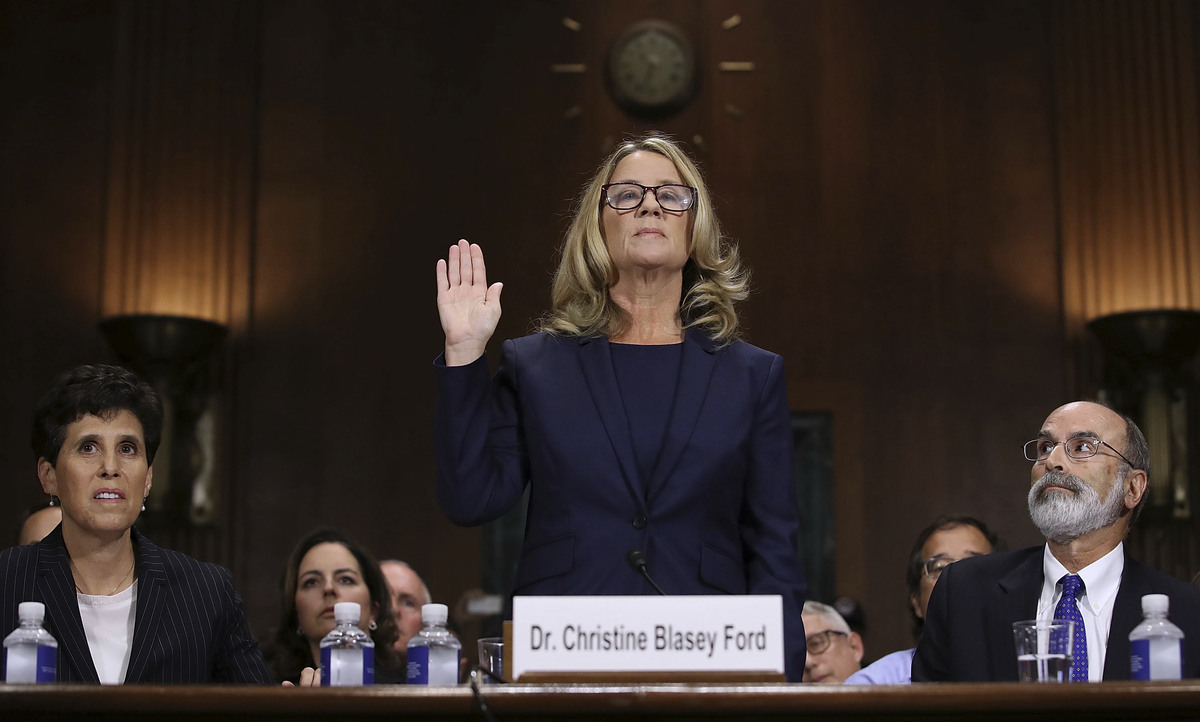 Christine Blasey Ford is sworn in before the Senate panel on Thursday.

When Hill testified before the then-all male Judiciary Committee, there was no social media, no Twitterverse or Facebook friends. Thursday, there were four women on the Democratic side of the dais, and Americans were watching not just on TVs in airports and bars, but also in parks and streets and even subways on their smartphones.

In 1991, there was also no #MeToo movement, the vast cultural and legal reckoning of the past year on the issue of sexual misconduct that has toppled several powerful men in media, entertainment and business — and even the onetime federal appeals court judge Alex Kozinski, whom Kavanaugh clerked for early in the 1990s.

'Everyone Is Just Completely Captivated': Americans React To Ford And Kavanaugh

What will the long-term effects of Thursday's hearing be? Will history record the hearing as an inflection point that changed the Supreme Court confirmation process? Will it change how the public thinks about sexual assault allegations?

Brett Kavanaugh, his nomination to the Supreme Court on the line, gave an opening statement of some 45 minutes in which he angrily denounced the charges against him, showing much more emotion than he did in the initial round of questioning earlier this month or during his interview on Fox News earlier this week. He not only denied being at a party with Ford, but blasted his confirmation process as politicized, declaring, " 'Advice and consent' has been replaced with 'search and destroy.' " 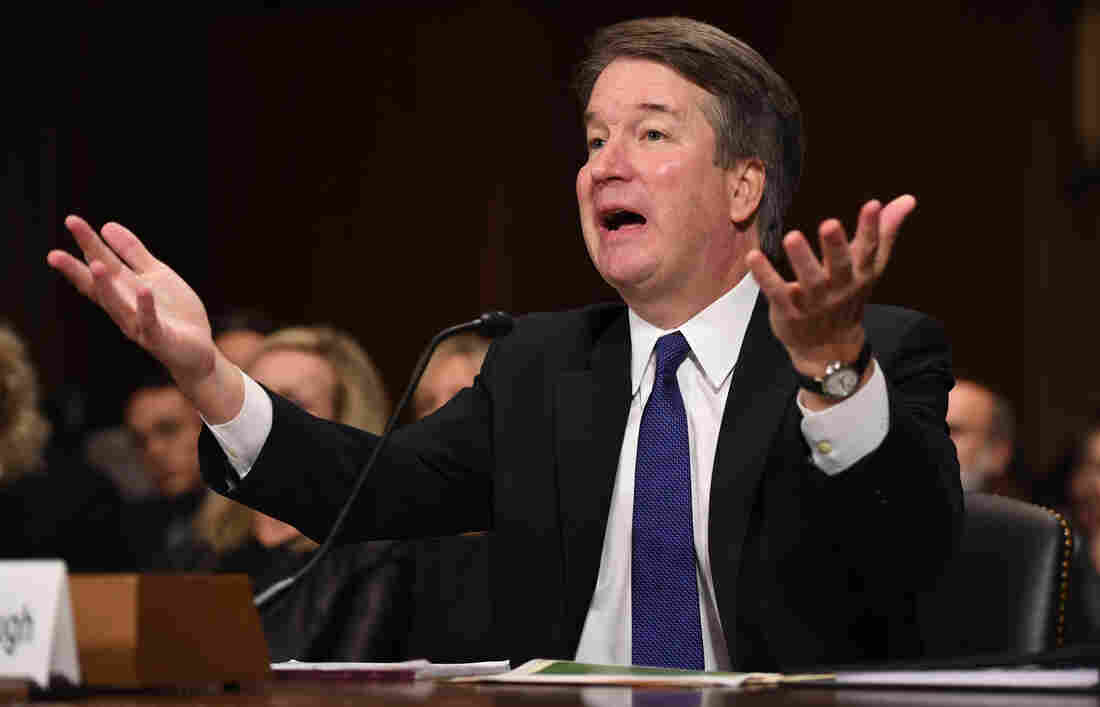 What was also striking was his harsh and very un-Supreme-Court-like denunciations of Democrats on the committee and his assertion that the opposition to his confirmation "amounted to revenge on behalf of the Clintons." Kavanaugh served as a staff attorney on independent counsel Kenneth Starr's investigation of President Bill Clinton in the 1990s.

As with much of Thursday's proceeding, Kavanaugh's anger and defiance echoed with the 1991 confirmation hearings of Clarence Thomas when Anita Hill accused Thomas of sexual harassment. Back then, Thomas decried his situation as a "high-tech lynching."

The defiant tone Kavanaugh set for his defense won praise from the president immediately as the hearing ended. "Judge Kavanaugh showed America exactly why I nominated him. His testimony was powerful, honest, and riveting," Trump tweeted. "Democrats' search and destroy strategy is disgraceful and this process has been a total sham and effort to delay, obstruct, and resist. The Senate must vote!"

Judge Kavanaugh showed America exactly why I nominated him. His testimony was powerful, honest, and riveting. Democrats’ search and destroy strategy is disgraceful and this process has been a total sham and effort to delay, obstruct, and resist. The Senate must vote!

" 'On a typically weekday, our queue of folks waiting to talk to one of our hotline staff might be six to eight people,' said Scott Berkowitz, chief executive of the Rape, Abuse and Incest National Network, which runs the hotline. 'Today, it's gotten as high as 49.'

"Many of those callers, Berkowitz said, had stories that mirrored Ford's: They wanted to talk about events that had happened years before."

It's a phenomenon that began last week, when President Trump seemed to question via Twitter why Ford hadn't reported her alleged assault at the time some 36 years ago.

I have no doubt that, if the attack on Dr. Ford was as bad as she says, charges would have been immediately filed with local Law Enforcement Authorities by either her or her loving parents. I ask that she bring those filings forward so that we can learn date, time, and place!

Responding to Trump, social media users flooded Twitter and other online platforms such as Facebook sharing their stories and using the hashtag #WhyIDidntReport.

4. Did bringing in an outside expert to question Ford backfire?

A bit of second-guessing that began early in the hearing was about the decision by Republicans on the committee to use an outside expert on sex crimes to question Ford. They were in a difficult position, in terms of optics, as the GOP contingent on the panel consists of 11 white men.

The expert, Rachel Mitchell, sat behind a desk in front of the GOP side, the 11 men looming behind her. And from the start, she was faced with a difficult task. Her questioning of Ford was limited to five-minute increments, after which she would have to stop and interrupt her line of inquiry in order to allow a Democratic senator to go next and speak with Ford, as the Democrats on the committee used their allotted time to question Ford directly.

At the end of the questioning of Ford, Mitchell, the head of the sex crimes unit at the Maricopa County Attorney's Office in Arizona, acknowledged what had become obvious: that there is "no study that says that this setting in five-minute increments is the best way" to question a victim of sexual assault.

Beyond that though, it was not clear what Mitchell was trying to ascertain or accomplish. Ford's fear of flying was one area that Mitchell homed in on, getting Ford to admit that, despite her concerns and reluctance to fly to Washington for an interview by the committee, she had flown for vacations and professional conferences.

Mitchell began the questioning of Kavanaugh as well, but Republican senators soon decided to ask their own questions and use their time to defend Trump's high court nominee. It was a marked shift from Republicans' hesitancy to question Ford. Through the final stretch of the hearing, Mitchell was not given the opportunity to probe Kavanaugh's testimony as she was with Ford's.