Accessibility links
Punks, Up Against The Wall The new book Burning Down the Haus fastidiously traces the self-discovery of punks in the socialist dictatorship of East Germany, and the violence and repression they endured on the way to freedom.

Punks, Up Against The Wall

Punks, Up Against The Wall

A new history of punk in East Germany shows how the scene wasn't a posture, but a movement towards liberation. 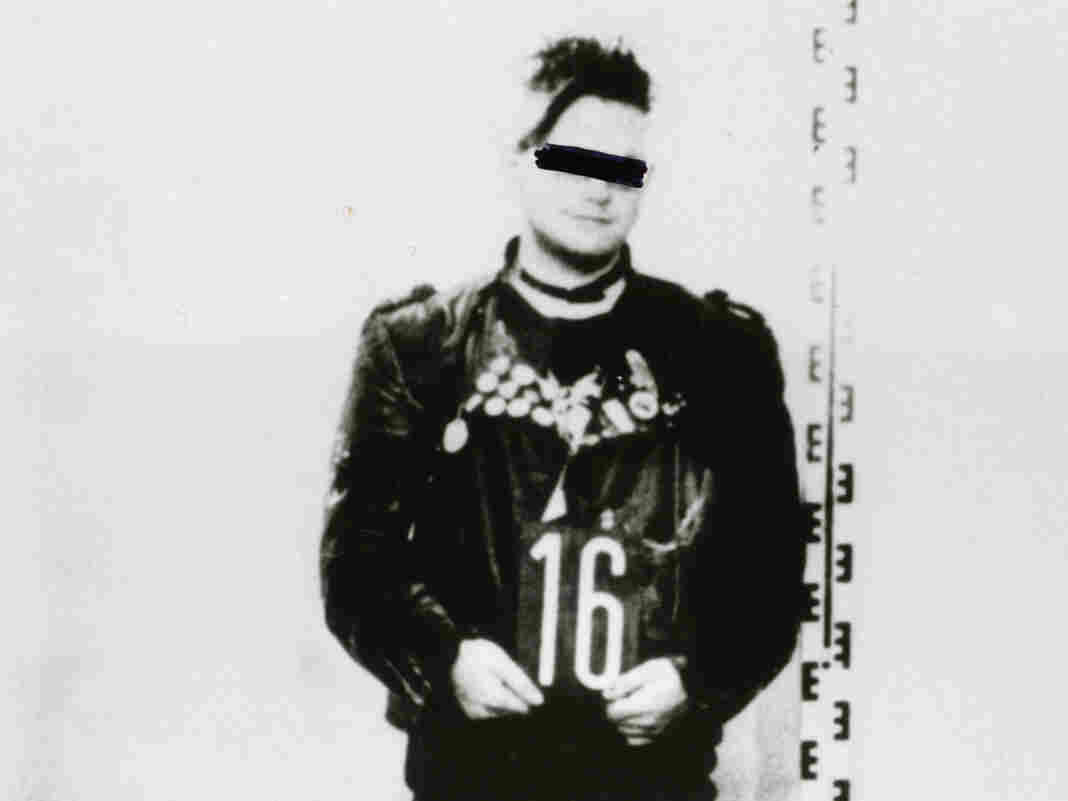 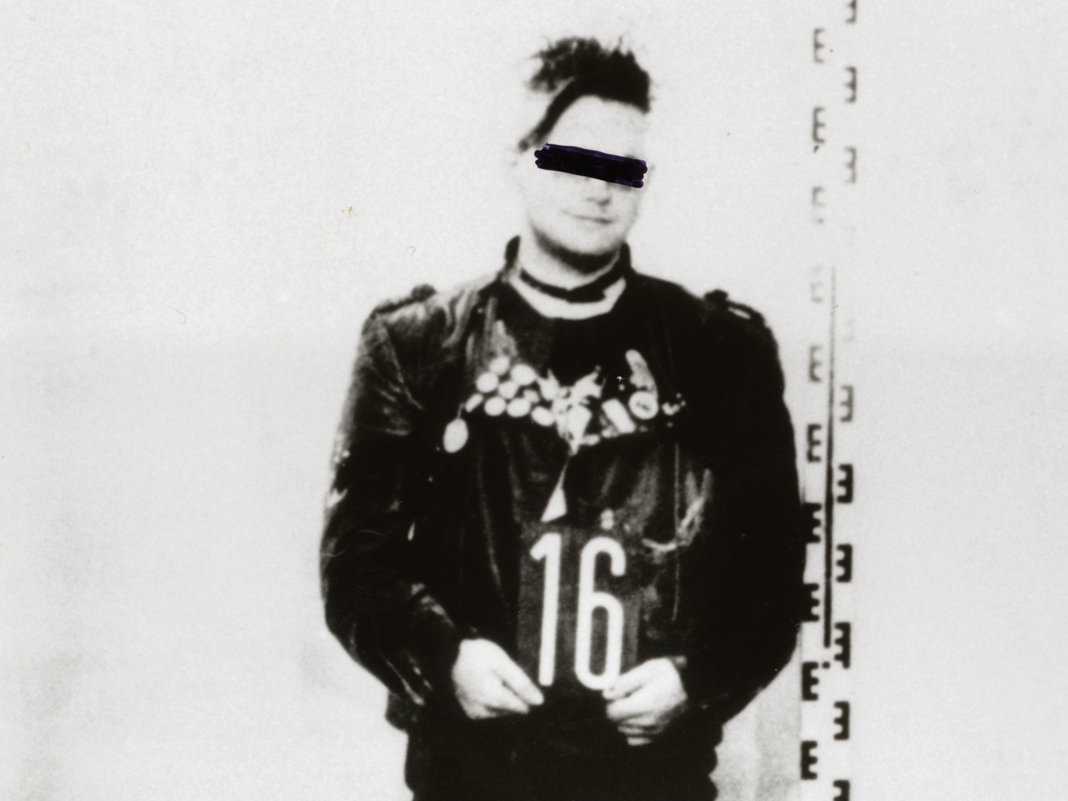 In 1979, a young East German named Micha Horschig made a prediction: The fall of his country's socialist government, the German Democratic Republic (GDR), would take 10 years.

Among the many other things to happen in the decade between was the gestation and maturation of punk in the GDR, a movement that would become stained with blood and colored black and blue, and which has now been fascinatingly traced — through extensive interviews and research that took nearly a decade — in Tim Mohr's new book Burning Down the Haus.

The sound of punk as it has become known — simple, aggressive, sneering and young — was arguably created in New York in the early-to-mid '70s and quickly found purchase in an economically depressed U.K. (kicked off, in no small part, by an early tour from The Ramones, on loan from the Big Apple). But the passion and depth of punk's character was likely never tested as it was by the mitotic group of young German kids in the '80s, which Mohr follows through first exposures, ridicules, beatings, imprisonments, forced expatriations and, eventually, liberation.

Life in the GDR was a prescribed one; indoctrination to the party — there was only one — began in grade school and was strengthened through participation in groups like Free German Youth. "Membership in communist youth organizations was not mandatory," Mohr writes, "and yet membership rates hovered around 85 percent." There was "a kind of inherent sense of where the boundaries were." Careers were assigned, attendance to universities parceled out. It was seen, as the book repeatedly points out, to be an "abundance of future," to the point of suffocation. This manifested in a slogan, also oft-repeated: "Don't die in the waiting room of the future." Or, in a lyric from the punk band Planlos ("No Plan"): "We have no plan, and we like it that way."

A recording of GDR punk band Planlos, or No Plan, with its song "Überall wohins dich führt," or (roughly), "Wherever You Are Leading."

Exposure to the sights and sounds of punks from the West was an essential bridge to these kids, helping them cross over from an intuitive sense they had that something was fundamentally wrong to the confirmation of it.

Micha Horschig — nicknamed (as most were) A-Micha, the "A" for the anarchist politics he both devoured and spread — became, as Mohr writes, one of the central punks in the East German movement. But, two years before he made that eerily precise "10 years" prediction, A-Micha came to punk through an encounter that many future punks in East Germany would share — he heard The Sex Pistols for the first time. In A-Micha's case, it was through a portable cassette player a roommate during a hospital stay played for him. The experience was formative. Malcolm McLaren's "sexy young assassins" had, through a surreptitious network of cassette taping and copying reliant on radio signals beamed over the Wall from West Germany, (probably unknowingly) set off an elemental defiance well beyond that band's flash-in-the-pan existence. It would play a central role in preparing a society to slowly uproot its faith in, and eventually upend, a regime whose nearly unprecedented tactics of repression would come to be known more fully in the wake of its downfall.

The disproportionately violent and repressive response these social outliers were met with by the party — for dressing differently and considering, in poetry and lyrics, the low ceiling of expression they were living under — was, essentially, the kickoff. 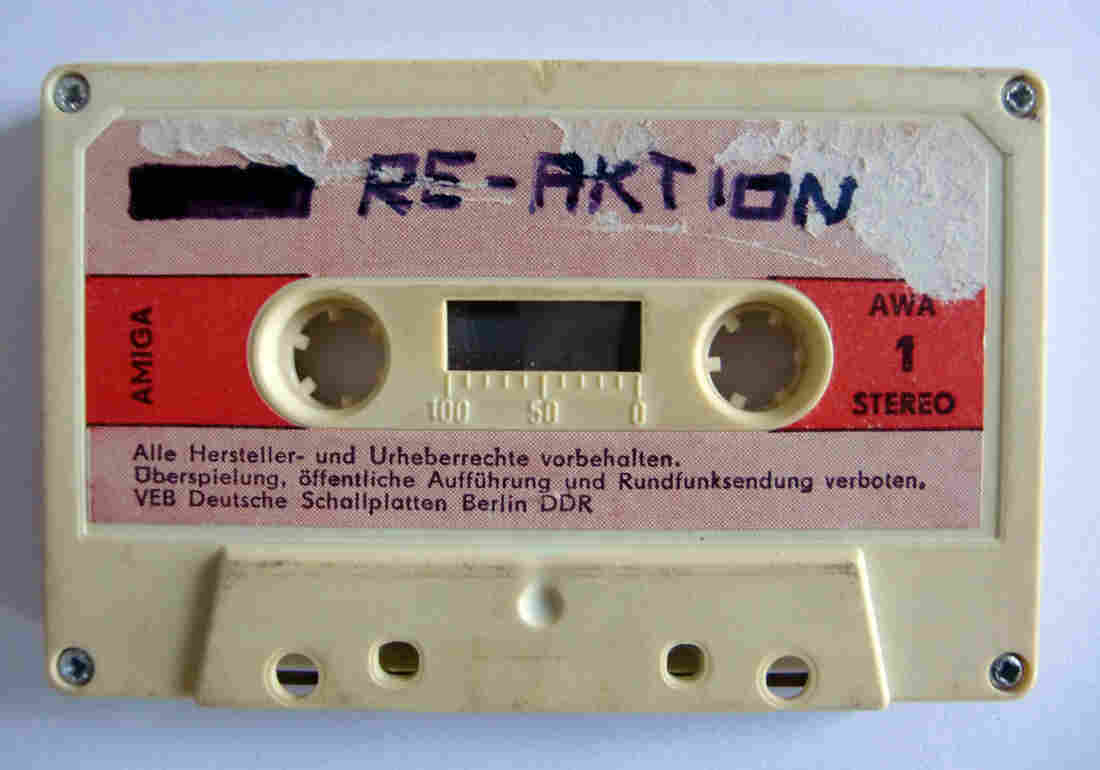 A cassette from the state-controlled record label Amiga, taped over by the band Re-Aktion. Hear this tape here. Mathias Schwarz hide caption

The party's tactics, besides beatings, included thinly veiled threats against family members (since work was assigned, it could be unassigned), arbitrary stops in the street for identification that would, because the punks didn't resemble the photos on them, lead to detention and interrogation, which would then lead to increased surveillance, which would then give authorities reasons for more detentions or formal charges leading to substantive jail time. Years, for some. All of these strategies were, eventually, directly connected to the famously pervasive surveillance and misinformation tactics of the Ministerium für Staatssicherheit, or Ministry of State Security — better known as the Stasi. The ministry penetrated every level of East German society, monitoring parties, concerts and individual punk bands themselves, as Mohr reports. The Stasi retained about 189,000 "unofficial collaborators" — one for about every 100 citizens — and employed 85,000 regular employees.

One scene from Burning Down the Haus is particularly illustrative of the absurdly defensive position the party adopted when dealing with the punk youth movement in its midst. On May 21, 1983, a group of 30 or so punks inscribed "Fascism never again — Berlin punks" on a wreath they intended to lay in memorial at the Sachsenhausen concentration camp. The peaceful protest, Mohr writes, served multiple purposes, countervailing the attempts of the state security apparatus to paint punks as neo-fascist right-wingers, and letting the state hoist itself by its own petard, in public: "It was a crazy scene: a group of youth battling riot troops in an effort to be allowed to criticize Nazism, which was the explicit philosophical enemy of the government whose riot troops were beating the kids." 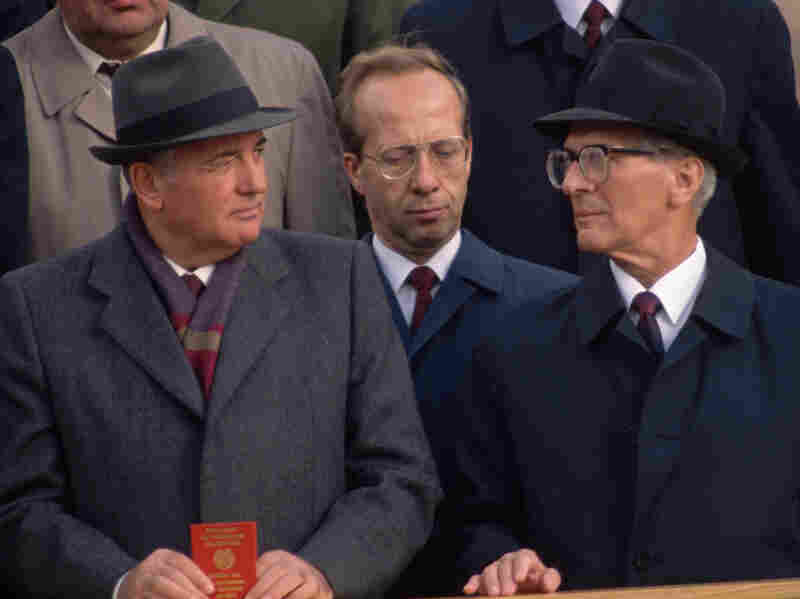 Soviet premier Mikhail Gorbachev, left, and GDR head of state Erich Honecker in 1989, with their interpreter in the middle. Peter Turnley/Corbis/VCG via Getty Images hide caption 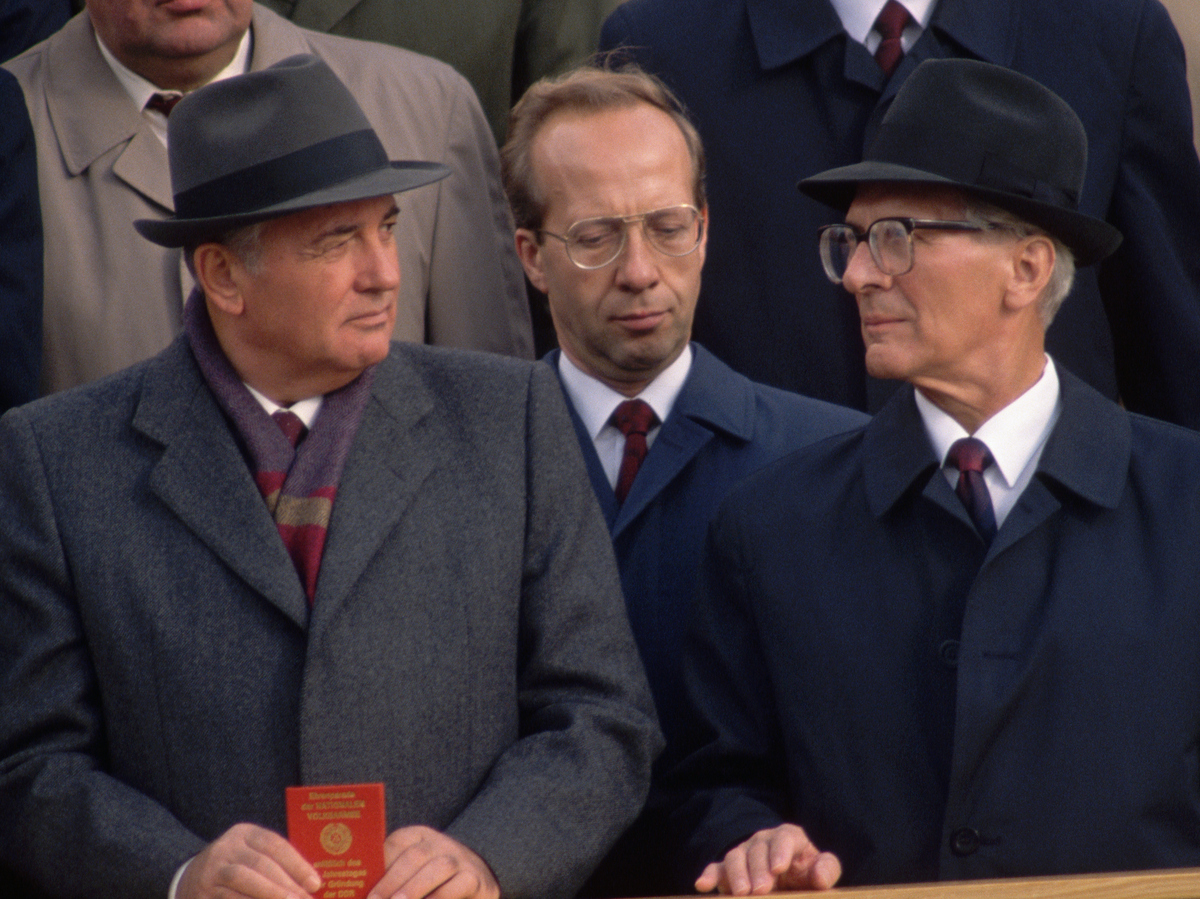 Soviet premier Mikhail Gorbachev, left, and GDR head of state Erich Honecker in 1989, with their interpreter in the middle.

Of course, this revolution didn't exist in a vacuum; the downturn of the GDR economy pressurized the society, while Mikhail Gorbachev's perestroika policies — which focused on self-determination, anathema to a communist republic — alienated the country's leadership from its core mission and a central strategic ally. But a complacent public doesn't exist in a vacuum either; the public had access to food and beer and televisions and all the creature comforts you'd expect in a relatively developed European country at the time. The cost of digging deeper, or aiming higher, was prohibitive for most.

"People look away. It's natural," Mohr argues in his book's early pages, "That's just the way people are. Until they really do come for you. Until you have to defend yourself. Until you bear the brunt of injustice."

Tim Mohr "didn't speak a word of German" in 1992, when he arrived in post-reunification Berlin after graduating college. "Very quickly I found this other scene happening in the central parts of East Berlin, which in many cases were either dilapidated or completely derelict buildings — I think at that time there were over 100 squatted buildings," he explained recently during an interview in the back garden of Community Bookstore in Brooklyn. "Basically the whole [of the former East Berlin] was empty after the fall of the wall, and there was this incredible scene growing there. At first, you're shocked at how stereotypically grey the situation is, and then I was shocked the other way. I just couldn't believe how colorful and vibrant and alive this underground scene was. I immediately realized I wanted to stay there." 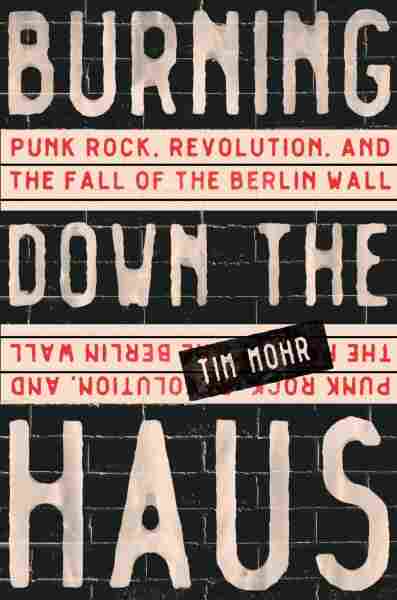 Burning Down the Haus

Punk Rock, Revolution, and the Fall of the Berlin Wall

Title
Burning Down the Haus
Subtitle
Punk Rock, Revolution, and the Fall of the Berlin Wall
Author
Tim Mohr

The underground he found was a sheathed knife by then, but one that had been sharpened and sophisticated against the full brunt of the East German security forces for the decade-plus previous by the subjects in his book. He describes the squats he found as resting in beautiful, if dilapidated, art deco constructions — "East Berlin was basically a complete nineteenth-century city standing empty," he told me — converted into functioning as show spaces, cafes, bookstores, residences and community gathering sites all in one.

He spent the '90s making his living as a DJ in Berlin, and eventually met a bartender at one of the clubs he often played at named Micha Kobs, a guitarist in an East Berlin punk band called Planlos. "I didn't realize at the time how important his band was, it turned out to be one of the most important bands." Kobs had squirreled away photos and lyric sheets in a false-bottommed drawer before the collapse of the GDR. "Once I saw these materials, I realized this was what I had been seeking in moving abroad," Mohr told me.

This model of communal — not communist — living continues, Mohr writes near the book's conclusion, in certain spaces in Berlin. But elsewhere in the world, the repression in East Germany — like so many past mistakes repeated — is, to varying degrees, mirrored today. Pyotr Verzilov, a member of Pussy Riot who has used peaceful, art-based protests for years to criticize the Kremlin and Vladimir Putin's leadership, has accused the Kremlin of poisoning him in Moscow on Sep. 13. A crackdown of the dance club and progressive social hub Bassiani in Tbilisi, Georgia — under the auspice of "drug policies from the stone age," as the club's founder put it — earlier this year resulted in a peaceful two-day rave, recalling the East German punks' wreath-laying at Sachsenhausen 35 years prior. Using artificial intelligence-powered facial recognition systems, the Chinese government has begun arresting people at concerts for unspecified reasons.

In societal frames like these, the likelihood of success against repressive regimes are low and the cost of trying remains high — just as they were for the "agitators" of the GDR. Until things get so bad that there's nothing else worth doing. The trick is knowing when that is, and where. 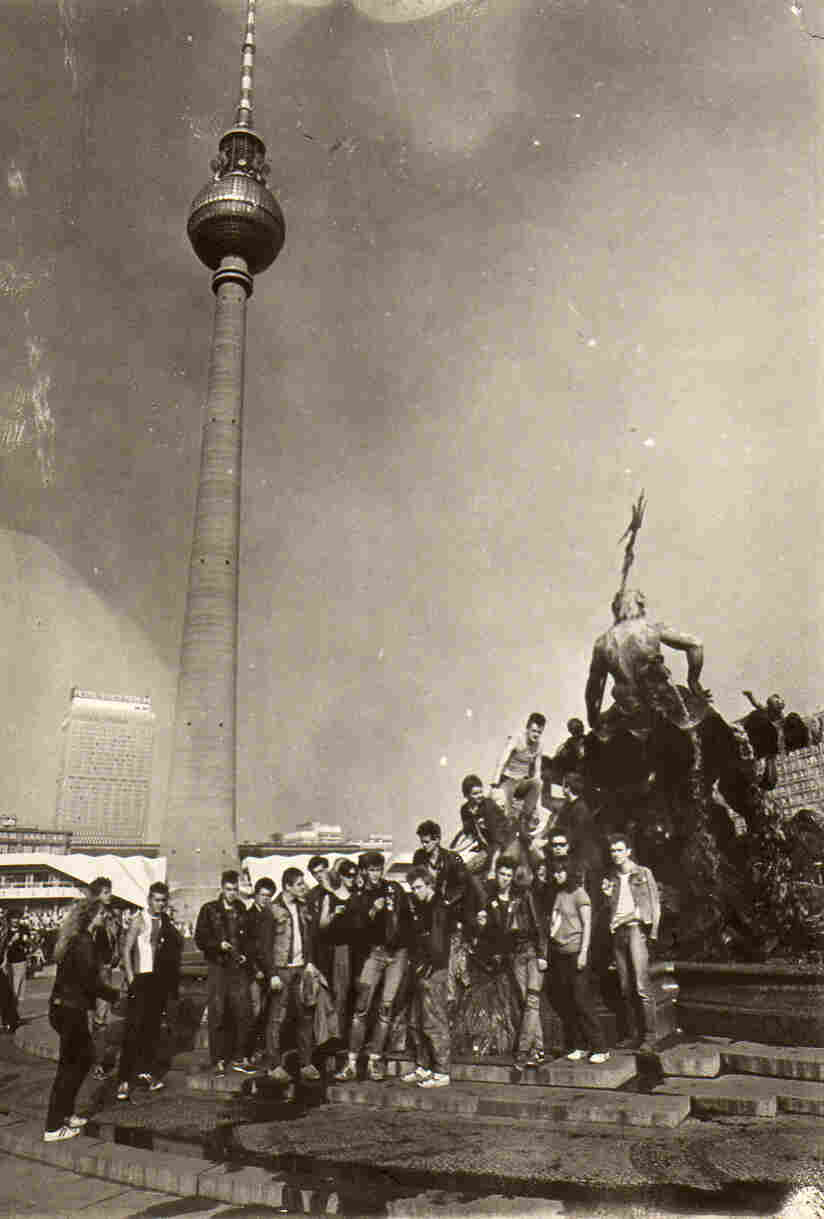