Accessibility links
WATCH: 'Extremely Rare' 2-Headed Snake Stuns Social Media, Charms Scientists A Virginia state herpetologist says finding the mutant copperhead in a resident's yard earlier this month is an "extraordinarily rare" occurrence. Even more stunning, he says, is that it is alive.

The venomous fangs of a copperhead snake are one thing. But the recent sighting of a rare two-headed snake in Northern Virginia is alarming — and mesmerizing — both social media spectators and scientists.

Earlier this month, a Woodbridge resident stumbled upon the young mutant reptile in a neighbor's yard. "I wanted to look away but couldn't stop looking at it. Plays trick[s] on the eyes," Stephanie Myers told USA Today after finding the snake and posting photos of it to her Facebook page.

What's even more exceptional is that the snake was discovered alive, according to state herpetologist J.D. Kleopfer, a reptiles and amphibians specialist at the Virginia Department of Game and Inland Fisheries. 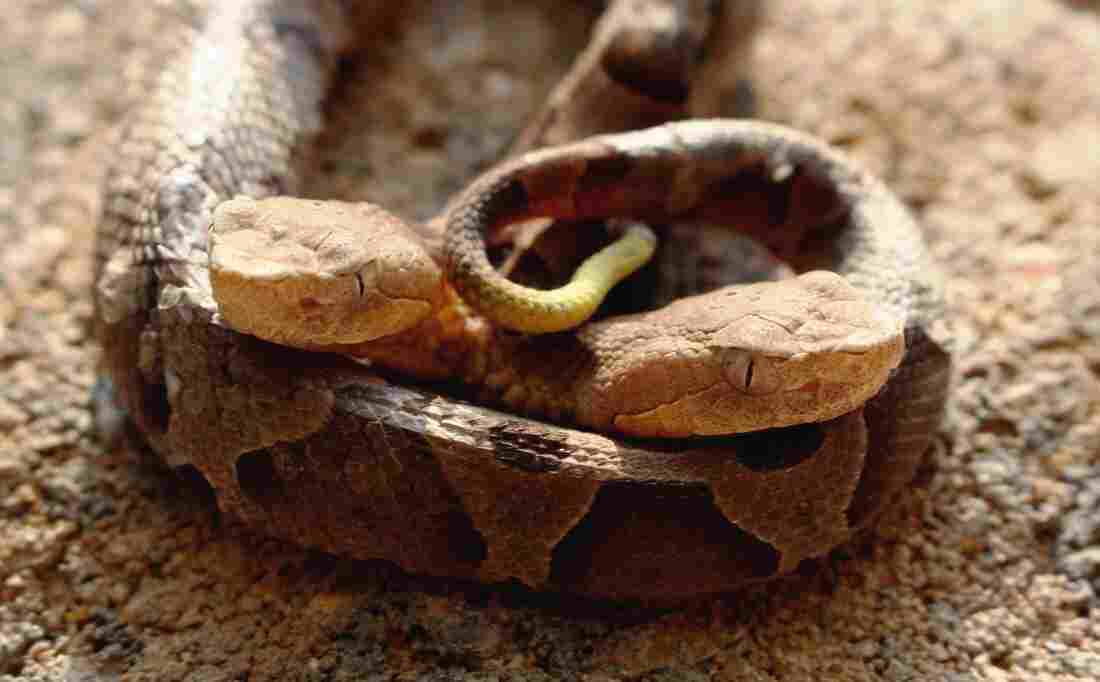 State herpetologist J.D. Kleopfer says the discovery of a two-headed copperhead snake in Northern Virginia earlier this month is an "extraordinarily rare" sighting that few of his colleagues have seen. J.D. Kleopfer/Virginia Dept. of Game and Inland Fisheries hide caption 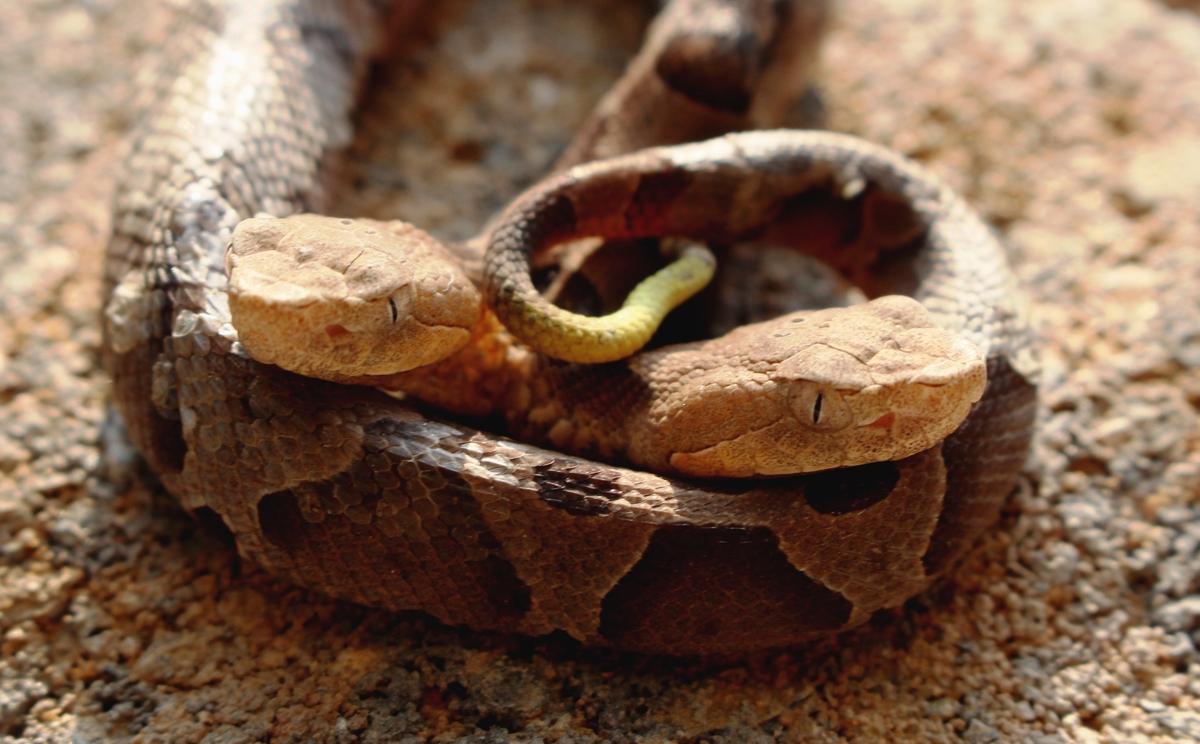 State herpetologist J.D. Kleopfer says the discovery of a two-headed copperhead snake in Northern Virginia earlier this month is an "extraordinarily rare" sighting that few of his colleagues have seen.

Two-headed copperhead snakes are "extremely rare" to find in the wild, Kleopfer told NPR's Scott Simon on Weekend Edition Saturday. Their competing heads often contribute to their short life span. "They can't coordinate escaping from predators and they can't coordinate capturing foods, so they tend to not live," he says.

Luckily, the rest of the baby viper's anatomy is shared, Kleopfer says, which means that "both heads are getting the nutrition they need."

In a news release, the Wildlife Center of Virginia says Kleopfer brought the snake to the hospital on Sept. 20 for an examination. X-rays revealed that one head has a more developed esophagus, Kleopfer says, while the other has a more developed throat. "Based on that, we're just attempting to feed the [left] head," he says.

That unusual mutation also prevents the snake's heads from quarreling with each other over the same food. Instead, Kleopfer says, the separated heads "seemed to be oblivious to each other."

The gender is still unknown, but Kleopfer estimates the baby viper to be about 3 weeks old and 6 to 8 inches long. Copperheads typically reach 18 to 36 inches in length. The scientist says a private keeper who specializes in vipers for zoological facilities is currently caring for the snake.

Venomous copperheads are a fairly common sighting for U.S. residents, especially in the Southeastern United States or in forested, temperate climates. Captive-bred two-headed snakes are slightly more common, he says, "but that's usually the result of inbreeding."

Kleopfer has been in the field of herpetology for some 30 years. Still, he says, "This is definitely a first" and an "extraordinarily rare" sighting that few of his colleagues have seen.

He hesitates to name the snake, as his goal right now is to keep it alive. If it survives, he says he hopes to donate the snake to a zoo.

As for the current state of the snake, Kleoper tells in NPR in a follow-up email, "The little guy or girl is doing well. It [has] eaten and pooped, which are excellent signs."

NPR's Sarah Handel and Viet Le produced and edited the story for broadcast.