Accessibility links
Review: Which 'Tea With the Dames' Dame Are You? In Roger Michell's delightful, delicate, crustless-finger-sandwich of a film, four legends of the British stage and screen gather to reminisce and complain and joke. Which one are you? 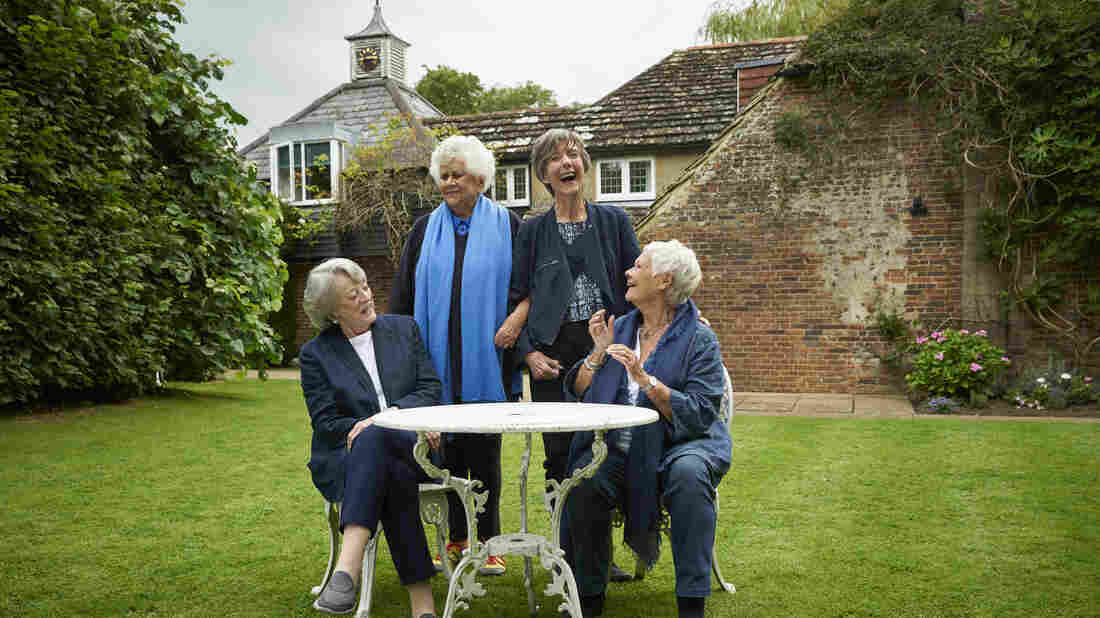 Humanity loves nothing more than sorting itself into tidy slots. We do it blithely, ceaselessly, unthinkingly, and then we cling, white-knuckled, to whatever it is we manage to convince ourselves those self-selected categories have to say about us.

Zodiac signs, Myers-Briggs profiles, favorite sports teams — they're all just fumbling attempts to satisfy, for ourselves and for those around us, the one driving hunger that preoccupies us, that fuels us, that we strive daily, and in vain, to get a handle on: The need to know, definitively, who we are. What we're like.

For reasons best left to anthropologists, we as a species seem particularly fond of the four-part taxonomy. Perhaps we take our cue from the natural world:

The ancients figured the best way to understand what today we call personality types was to look to bodily fluids, because they were, as a people, just hella gross: Black bile (melancholic), phlegm (phlegmatic), blood (sanguine) and yellow bile (choleric).

It seems to be hard-wired into us, this need to divide people, with their seething slumgullion of thoughts and moods and fears and fondnesses, into four neat quadrants. Today, of course, we're much too sophisticated and hygiene-conscious to think blood or snot — much less black bile, ew — has much guidance to offer on the question of personality.

No, today we're much more scientific, more rigorous, more grounded in what truly matters, and when we divide ourselves into four archetypes, we're just plain smarter about it.

Until now. All of that — everything that came before: springs and snots, Mirandas and Marnies, Ringoes and Ravenclaws — that's all over. That's done. That's cancelled.

Because with the release of a delightful, delicate, delicious crustless-finger-sandwich of a film called Tea With the Dames, a better, truer taxonomic structure has revealed itself to humanity.

Today, and henceforth, we are Maggies, and Eileens, and Judis, and Joans.

Some background: Director Roger Michell gathered Dame Maggie Smith, Dame Eileen Atkins, Dame Judi Dench and Dame Joan Plowright at Plowright's country estate, sat them down in the garden (and, subsequently, when rain threatened, at various interior locations in Plowright's home) and threw out subjects for the four old friends to discuss.

Topics include, but are not limited to: Cruel directors, handsy actors (names are named!), what it's like to work onstage with one's husband, aging, death, critics who carry around an inflated sense of their worth (nervous cough), advice they'd give to their younger selves, and, randomly, snatches of dialogue or song lyrics from some long-forgotten revue.

Michell underscores these conversations with clips of the women's performances over the years, digging heavily into archival British television productions of the '50s and '60s — many of which will be, to American viewers, something of a quiet revelation. (NOTE: In Britain the film was released as Nothing Like a Dame, which is just an empirically better title. And a truer one, too, as it pains me to report that only two cups of tea, and absolutely no tea sandwiches, make an appearance in the film; instead the four women spend most of it running time sipping (ugh) water, though they each get a lousy, single glass of champagne in the home stretch.)

As the four women address these subjects, the contours of their respective personalities coalesce in the viewer's mind. When asked what it was like to play Shakespeare's Cleopatra, for example, Maggie Smith initially refuses to talk about it, preferring to let someone else take the lead. Eileen Atkins says she never tackled it, because she thought herself not good-looking enough, and didn't have the courage.

"Niether did I," says Maggie Smith, dryly (Maggie Smith says everything dryly), "that's why I did it in Canada." (The particular spin she puts on the word "Canada," if reported to authorities in Toronto, could start an international incident.)

Joan Plowright echoes this sentiment, noting that if she'd played Cleopatra when asked, she'd also have had to deal with the belief that she'd only gotten the part because her husband Laurence Olivier ran the theater in question.

Judi Dench eventually undertook the role in Britain, but only after asking the director if he was certain he wanted "a menopausal dwarf" to play the part.

We've fed this information, along with other tidbits gleaned from repeated viewings of the film, into a vast database. The result, below, is ...

The Four Tea With The Dames Personality Types

Dame Eileen Atkins, 84, is likely the one of the four least-known to American audiences who are not, for example, me. (If you're not familiar with her work, why not start with her incandescent Alan Bennett monologue, The Hand of God? Some of us (hi!) have internalized her delivery of this monologue to such a degree that if we hear or see the world "elm" we immediately channel Atkins' delivery of the line, "Elm. Fruitwood. Anything painted," often aloud, often to our husband, often to his exasperated sighs.)

Characteristics of an Eileen:

Warm, wry, humorously self-effacing. The one of the four most likely to tell a racy story. The kind of person who'd dutifully attend a Vietnam War protest in Trafalgar Square, but would decide, once folks started getting arrested, that she should really just head home and pick up some crumpets on the way. Knows her angles, and can find her light, and has no qualms about gently remonstrating the stills photographer shooting her and her friends in what she believes to be an unflattering way. "That is not nice for old ladies, Mark. Oh, Mark I'm not your friend, and I shall never speak to you again."

Judi Dench, 83, has played a lot of queens, over the years. So ... many queens. Her IMDB page reads like a RuPaul's Drag Race season cast announcement. Is how many queens. The first of the four to receive her ... Dame...ship? Which is something the other three do not let her forget.

Characteristics of a Judi:

Effusive-ish, locquacious-ish (we need to grade on a curve, here, as these women are English), wistful, romantic. Most willing to break a silence with a story. Conciliatory and deferential, a seeker of the middle ground — when discussing the role of naturalism in Shakespeare, for example, avows repeatedly that spontaneity and poetry can co-exist, if you do it right.

Joan Plowright, 88, was already an accomplished actor when she married the considerably older Laurence Olivier, and she speaks of their relationship — and the fact that critics and audiences felt she hadn't earned many of the opportunities she received — with honesty and pragmatism. She's the oldest of the four; she's lost her eyesight, now, and her hearing aid drops out from time to time over the course of the film, but she's arguably the sharpest, most fully present in the moment.

Characteristics of a Joan:

Clear-eyed, emotionally intelligent. The Daredevil of the group; having lost her sight and much of her hearing, her ability to read a room's emotional temperature — and comment on it — is astonishingly acute. Very matter-of-fact about her late husband's good points and bad, and how fed up she got sharing a stage with him "when you knew everyone was looking at him, and not at you."

Maggie Smith, 83, is of course a hell of a lot more than Minerva McGonagall, more than the Dowager Countess. She's knocked an Alan Bennett monologue out of the damn park, in her time, and won a couple of Oscars for her trouble. She can deliver a line like "Ooh, that's tacky. That's really tacky," as she did in Murder By Death, with a relish you could slather on a hot dog. (Look I'm not not going to tell you that you can watch her do her incandescent thing in The Prime of Miss Jean Brodie on YouTube right now, should that be a thing you wish to do.)

Characteristics of a Maggie:

Circumspect, sardonic. The most introverted of the four, and the most wary of the project. Clearly anxious about how she'll be perceived, and hangs back to let the others go at it. If it means there'll be less attention in her direction, she'll happily stir the pot, as when she chides Dench for the money she's made on Bond movies, or when she notes that Dench gets all the best parts nowadays — which causes Plowright to mention that her agent hopes to find her "a nice little cameo that Judi Dench hasn't got her paws on."

When introduced to a particularly well-built young stills photographer, she beams, looking him up and down like she's appraising a prize heifer. But later, when he gets into her eye-line during an interview, she lovingly lacerates him. "You know, it seems you're always there," she says. "Do you want me to move?" he asks.

"I would love it if you moved," she says.

Also, not given to looking back on her own work. When asked how many seasons of Downton Abbey she's done, she shrugs. "Haven't watched it," she stage-whispers. "Haven't had time. They gave me a boxed set. I shall have to hasten," she says, still whispering, "'cause I won't last long enough to see the wretched thing."

There you have it. Armed with this four-part key to the mysteries of the human mind and personality, you can face each fresh obstacle life throws at you with new insight. My status as an inveterate Maggie, with Eileen ascending, for example, is an abiding source of comfort, though I will always find myself drawn to the Joans of the world.