Accessibility links
'Good And Mad' Explores Women's Anger At A Pivotal Moment It hardly needs saying that women's anger (more from one political party) has been roiling since the 2016 election. Rebecca Traister's new book explores the history and politics involved. 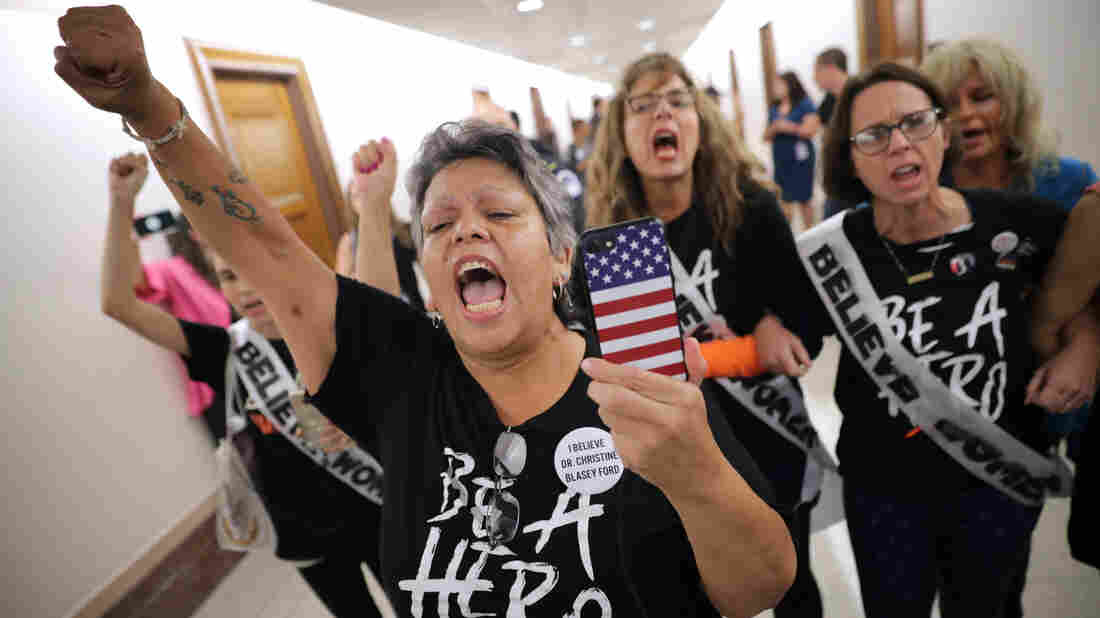 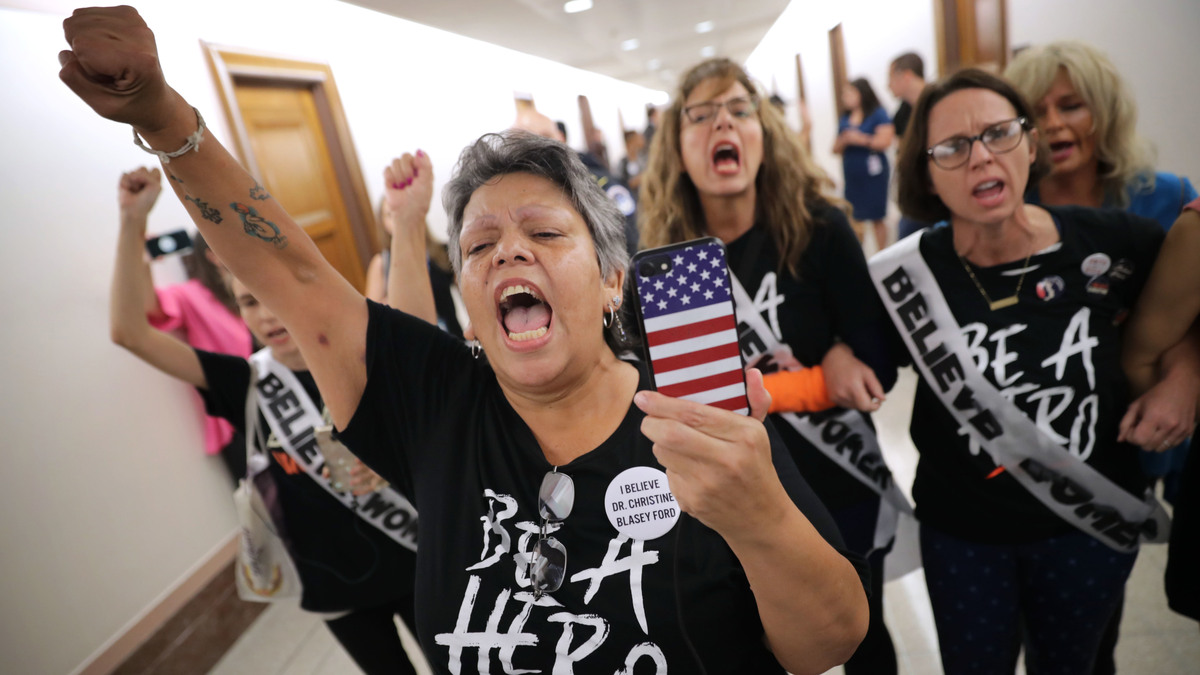 Months ago, I was asked to review Rebecca Traister's Good And Mad: The Revolutionary Power of Women's Anger.

"What timing," I thought, as I read the book while red-robed handmaidens protested Brett Kavanaugh's Supreme Court nomination confirmation hearings.

"Maybe Traister will have to write an afterword about this," I thought, as Serena Williams touched off a global conversation during the U.S. Open final about which women are allowed to express anger — and when. 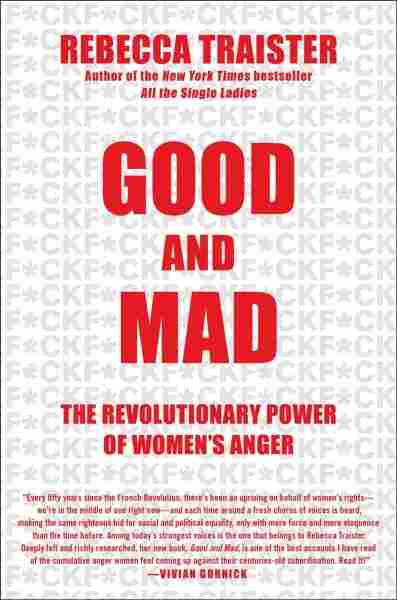 The Revolutionary Power of Women's Anger

"Oh, definitely about this," I thought, as multiple men accused of sexual misconduct mulled their comebacks. A couple of them resurfaced with blisteringly tone-deaf essays in (ostensibly) respected publications.

As I sat writing this review, the TV on my desk was tuned to Christine Blasey Ford's testimony accusing Brett Kavanaugh of assault. Shortly thereafter, an acquaintance took to Facebook to furiously spill out the brutal details of her own rape. A close friend started an email thread to our circle of female college buddies with the subject line "Angry Anger with Anger on Top."

Which is to say — it's easy to imagine that now is an even more fitting moment for Good and Mad than Traister herself may have imagined when she wrote it.

It hardly even needs saying that women's anger (more from one party than the other) has been roiling since the 2016 election. Good and Mad is one of a few new releases taking on the formidable task of exploring the intersection of politics and anger.

And Traister is trying to do a lot in her 250 pages. She writes in the introduction that her goal is to explore "the specific nexus of women's anger and American politics, about how the particular dissatisfactions and resentments of America's women have often ignited movements for social change and progress."

But there's much more here than that. She also illustrates the many ways that American society shuns angry women, convincing them that their rage is impolite, unattractive, or even unhealthy. This point is made over and over, but it doesn't get repetitive or tiresome, so much as that it hammers home just how pervasive the phenomenon is.

Traister also writes that she's trying to provide women with validation for whatever rage they are currently feeling. Her book's final line: "Don't ever let them talk you out of being mad again."

In covering all that ground, she has done her research — the book is thick with citations of other books, as well as interviews with candidates, activists, and longtime politicians. That said, her book is not a detached chronicling of women's anger in American history. She, at times, injects her own opinions and experiences into some of the stories, as well as her own politics — Traister is a liberal, and the book is unmistakably so.

Traister effectively conveys that women's anger has shaped America, and also that much of it is mischaracterized or ignored in popular accounts of history.

There's an explanation of how women of the temperance movement weren't all a bunch of hectoring moralists; many were also seeking a way to stop men from beating their wives. Or that the same Rosa Parks who quietly refused to give up a bus seat was also an outspoken anti-rape activist — and that at the age of 10, she picked up a brick and threatened a white boy who was attacking her. Or that women, not just men, were present and resisting police in the Stonewall Riots.

The book ranges across centuries of American history, with chapters exploring different facets of women's anger: one on how it often disguises itself as sadness or humor or religious fervor; another on how women politicians are penalized for daring to get publicly upset; another on racial divisions among contemporary feminists; and many others.

Because those topics often bleed into each other and are hard to disentangle, this all contributes to one weakness of Good and Mad: It's a book that reads best when consumed one chapter at a time.

I finished a chapter examining media responses to anger in powerful women like Hillary Clinton and Michelle Obama, then jumped into a new chapter about how women hide their anger — which moved from the temperance movement to Upton Sinclair to Sen. Patty Murray to Emmett Till — then hopped into another chapter, also about hiding anger (this time with humor), that started with Rep. Pat Schroeder and moved on to Flo Kennedy. More than a few times, I found myself wondering where I was again.

Which is to say, it feels more like a string of essays than a single narrative of women's anger in American history.

But those essays are impressively crafted, and it's a testament to Traister's talent that it's easy to shrug and continue reading in the maelstrom of history she brings together.

Even if you occasionally lose the thread, Traister excels at consistently throwing out insights that are so clean that they seem like you had them in your head in the first place.

Any woman who has tried to candy-coat her fury in jokes will punch the air at Traister's description of how she has done it, too:

"Even when things were bad, a non-confrontational approach was preferable, for strategic, aesthetic, and moral reasons. So I was funny! And playful, cheeky, ironic, knowing! I worked to make it clear that I am a fun person who enjoys friends and beer and laughter. I took great care to be nice and respectful to opposing viewpoints. ... Many of us who may have covered our fury in humor have occasionally found ourselves exploding."

And that's one of many nod-furiously-along moments. There's also the unsettling sense that sex-positive feminism has often been "a strategic attempt to obscure or distract from more unpleasant challenges to male power." And the frustration you feel when you're practically glowing with rage — and it comes out as tears.

One of Traister's other greatest strengths is that she has been intentional about bringing in a range of voices — especially black women. She lucidly picks apart just how much more difficult it is to navigate anger as a black woman, but also expands out to investigate the racial divisions within mainstream feminism that many white feminists are only beginning to grasp.

But her intersectionality also highlights a group of women that is largely left out of her examination of contemporary politics: conservative women.

To be clear, this is not to prescribe that the book should split its time equally between Democratic and Republican women, or even close to equally. The overwhelming brunt of the political anger in America right now has been from women who are left of center.

But an exploration of women's anger is not comprehensive if it doesn't chart out the full terrain of that anger — and that means talking to women in the party that is much less angry now.

Beth Moore and Jen Hatmaker, for example, are just two examples of white evangelical women who have publicly voiced their fury at President Trump's election. Gretchen Carlson and Megyn Kelly were two of the loudest voices denouncing sexual harassment at conservative Fox News.

Even one chapter exploring how conservative women are feeling their anger — or are conflicted about their anger, or are even not feeling it — would not only provide a more complete portrait, but also bolster the rest of Traister's considerable work, throwing it into greater relief.

I finished drafting this review on the day after the Ford-Kavanaugh hearings. Democratic senators had walked out of a committee vote in protest. Republicans were being publicly confronted by survivors of sexual assault.

But for anyone who reads Traister's book, myself included, one comparatively quiet moment from the hearing just might stick the longest.

"Does that work for you?" Ford asked the panel at one point, after being asked if she'd like a break. "I'm used to being collegial."