Accessibility links
Decades-Old Chemicals, New Angst Over Drinking Water Around the country, communities are learning their drinking water is polluted with a potentially harmful group of chemicals. The Trump administration is working on a plan to manage them. 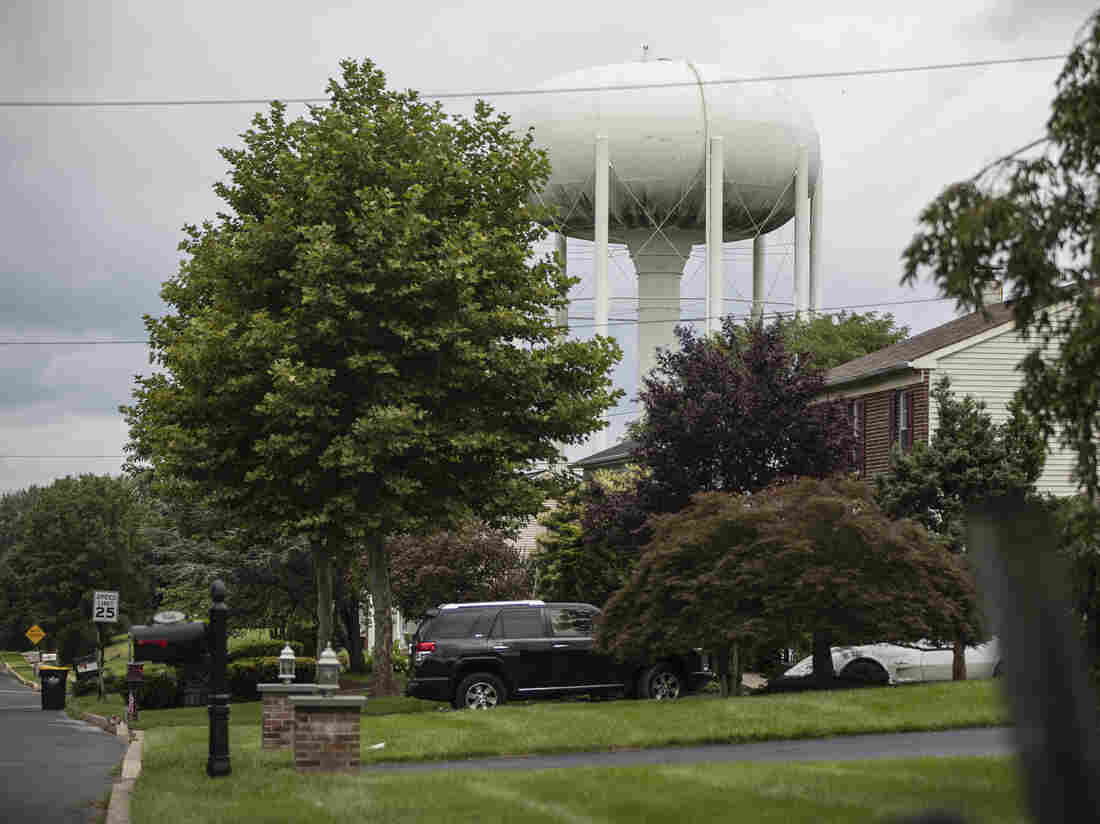 Horsham, Pa., is one of many towns around the country grappling with potentially harmful chemicals in its water. They're known as PFAS, and they're linked to cancer and other illnesses. Matt Rourke/AP hide caption 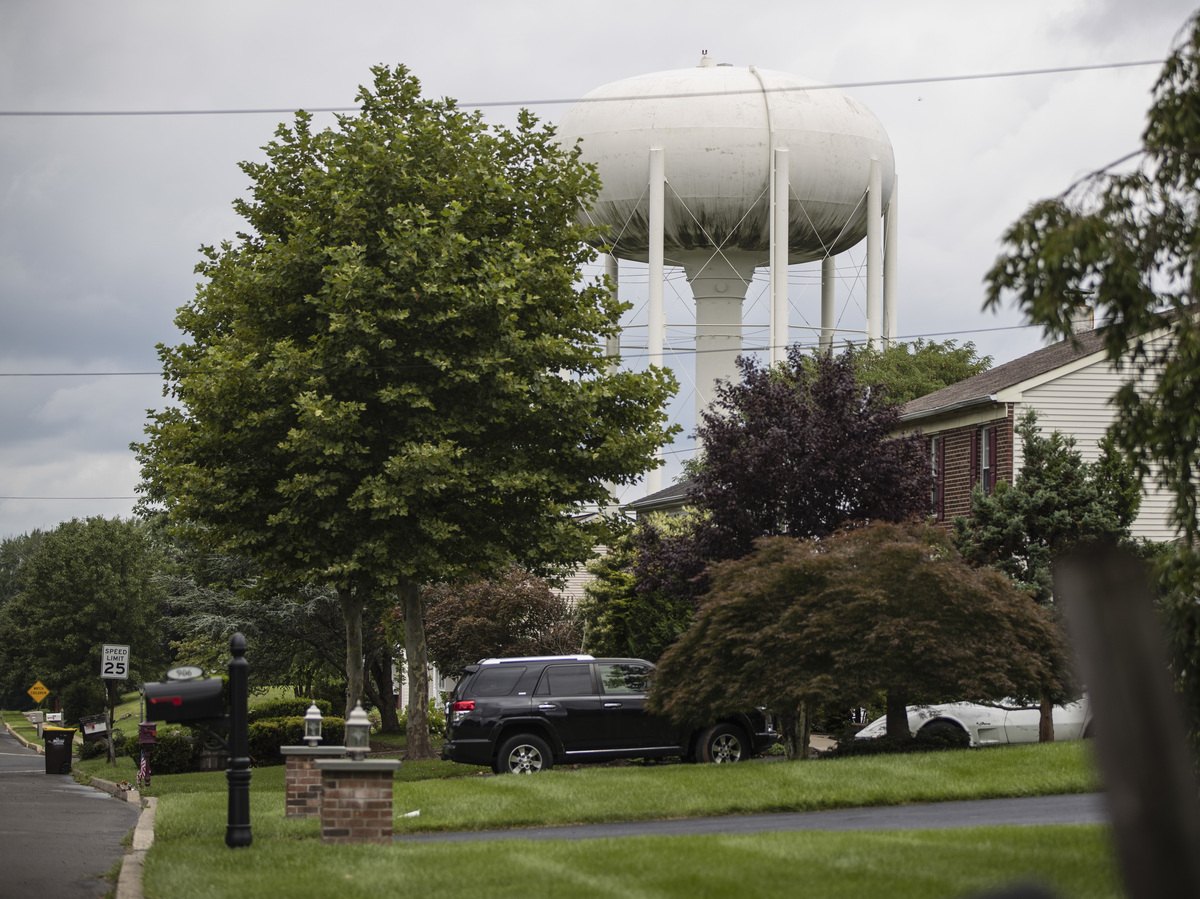 Horsham, Pa., is one of many towns around the country grappling with potentially harmful chemicals in its water. They're known as PFAS, and they're linked to cancer and other illnesses.

In some parts of the country people are learning their drinking water contains pollution from a group of chemicals called Per- and Polyfluoroalkyl Substances (PFAS). These chemicals have been linked to illnesses, including cancer. But a lot of questions remain including how exactly they affect people's health and in what doses.

These chemicals have been around for decades but the issue gained urgency in recent years as water suppliers tested for and found PFAS pollution as part of an Environmental Protection Agency program.

The EPA is working on a plan to manage PFAS but members of Congress are pushing the EPA to move faster. A few states already have established strict new standards to limit the compounds in drinking water. And in some places, such as the Philadelphia suburbs, PFAS pollution has become an issue in mid-term election races.

As scientists and policy-makers work to limit human exposure to the compounds here are a few key points that are worth knowing.

1. PFAS chemicals are useful but may be dangerous

PFAS chemicals are good at repelling oil and water. That makes them useful in a lot of products including non-stick cookware, fast food wrappers, pizza boxes, water-repellent fabrics and fire-fighting foam.

It's difficult to pin down exactly how harmful these chemicals are because research is limited. There was a big health study involving one form of PFAS in the Mid-Ohio Valley. From that and other studies scientists are comfortable saying certain diseases are linked to PFAS exposure but they won't be more definitive than that.

Manufacturers have agreed to stop using two forms of PFAS in the U.S. These chemicals take a long time to break down in the environment, which is why they remain a problem now. And Schaider says there are still many questions about the safety of newer forms of PFAS chemicals are still being used, though some people believe they are safer because they remain in the environment and in our bodies for shorter periods.

In some communities PFAS pollution may be known by another name if a specific compound is to blame for problems there. Some of the most common are PFOS, PFOA and Gen-X. PFAS is the overall name for this group of several thousand chemicals.

Among the places with PFAS pollution is Michigan where the some residents were warned not to drink the water for a month. In New Hampshire there are concerns a landfill may be polluting water. A case in New York came to regulators' attention after a resident tested his own water. And in North Carolina high levels of a PFAS chemical were found in drinking water downstream from a manufacturing plant.

A map of contaminated sites and communities where PFAS has been detected in drinking water has been compiled by Northeastern University and Environmental Working Group.

Lawsuits have been filed against companies believed to be responsible for the pollution. For example, Minnesota sued 3M over PFAS pollution and settled for $850 million in February 2018

3. State and federal agencies are responding but not fast enough for critics

The EPA required most water utilities to test for a list of PFAS chemicals from 2013 to 2015. In 2016 the agency lowered a non-binding health advisory limit for some PFAS compounds to 70 parts per trillion (ppt). That's about 70 grains of sand in an Olympic-size swimming pool, says Christopher Crockett, chief environmental officer for the water utility Aqua America.

But environmentalists argue that a Centers for Disease Control and Prevention study indicates the numbers should be much lower. A few states have set lower standards on their own.

The EPA is working on a plan to manage PFAS chemicals and expects to release it by the end of this year.

"We need actions to come out of those plans that lead to clear direction for water suppliers," says Crockett. He wants to know what level of PFAS chemicals in water is safe and when should his company install filters to remove the chemicals.

The Department of Defense also has a big role to play in cleaning up PFAS pollution. The agency uses fire-fighting foam for training at air bases around the country. In places like Pennsylvania PFAS chemicals from that foam have made their way into local drinking water.

4. You can take steps to protect yourself

When utility company Aqua America learns it needs to treat water polluted with PFAS it installs big carbon filters. If you're worried about this issue and want to be extra cautious, you can essentially do the same in your home.

Christopher Crockett with Aqua says filters on refrigerators that dispense water or pitchers with carbon filters work pretty well—just make sure you change the filters regularly as manufacturers recommend.

If you want to also limit exposure from taking showers or brushing your teeth then a whole-house filtration system might be necessary. When asked if he filters his water, Crockett says he does not. He's comfortable that water under the current EPA health advisory level of 70 ppt is safe to drink.

Water is not the only concern though. Laurel Schaider with Silent Spring Institute says it could make sense to avoid things like fast food wrappers and microwave popcorn bags that can have PFAS chemicals in them. The problem is you never know which ones to avoid because there are no labeling requirements.

The state of Washington will eventually ban PFAS use for food packaging and fire-fighting foam.

Finally, eating a lot of fish also can be a concern in some places. New Jersey is among states that have warned people to limit how much fish they eat from certain bodies of water

This story has been updated to clarify that the EPA-required testing of most water utilities ended in 2015.