Accessibility links
They Were Rescued During Hurricane Florence. But Now, 'Everything Is Gone' For many in the Carolinas like the Colemans, Hurricane Florence took out what little security they had. "It's like you get ahead three or four steps, then you go back 20," Elizabeth Coleman said.

They Were Rescued During Hurricane Florence. But Now, 'Everything Is Gone'

They Were Rescued During Hurricane Florence. But Now, 'Everything Is Gone' 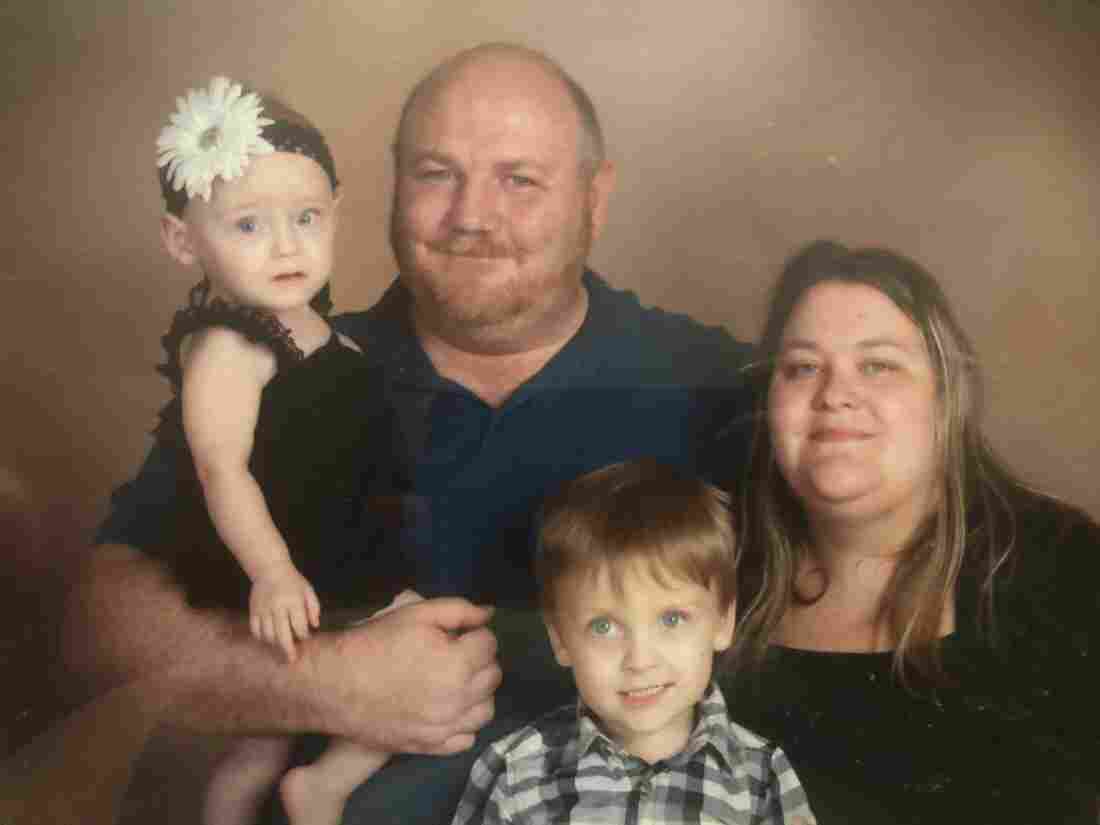 A portrait of the Coleman family in 2018. Courtesy of Elizabeth Coleman hide caption 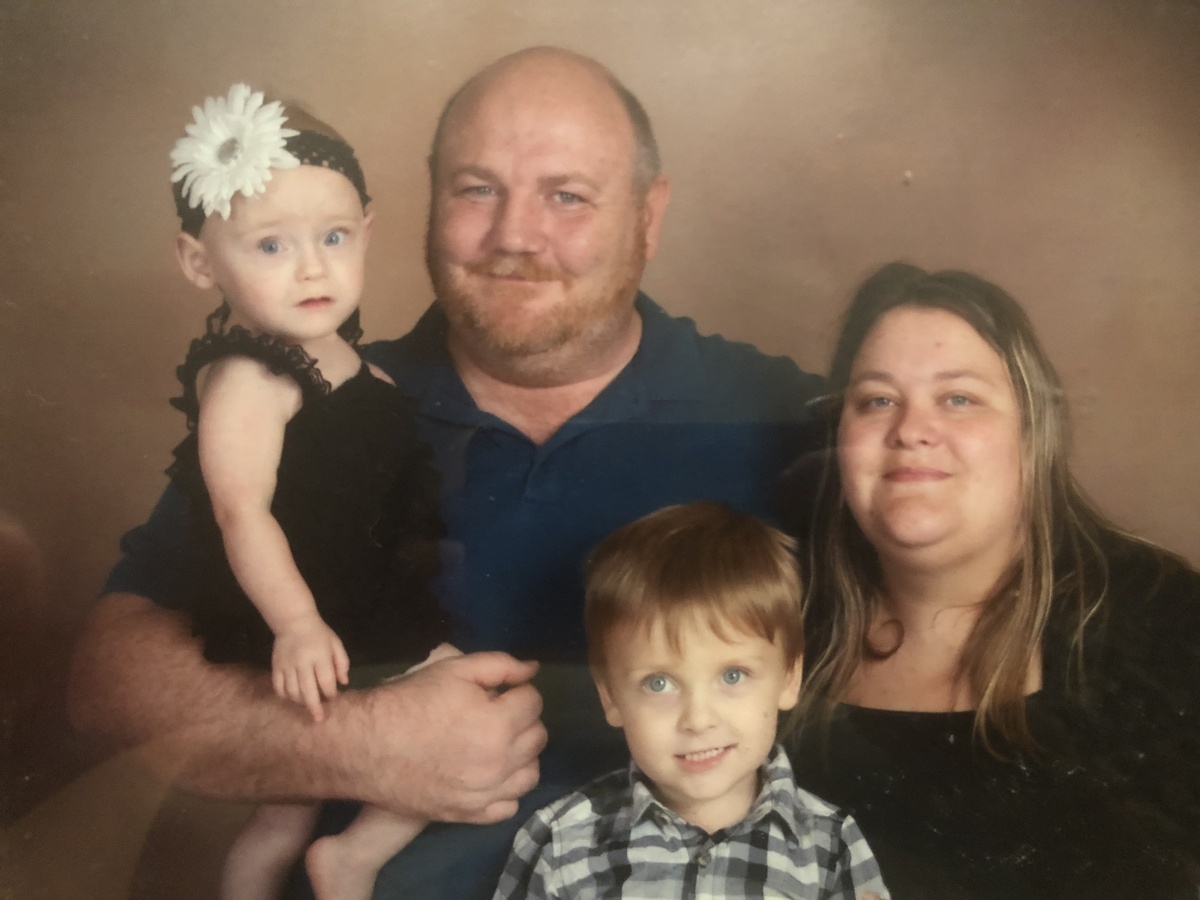 A portrait of the Coleman family in 2018.

Everything seemed okay when Elizabeth Coleman went to bed on Sunday, September 16. After evacuating three days prior to escape Hurricane Florence, her family of four and parents-in-law had just returned to their one-level, two-bedroom ranch home on Crusoe Island Road in Whiteville, N.C. It was, thankfully, undamaged.

The family had gone home after evacuating because they believed that the storm had passed and they had heard that the floodwater was receding. They thought it would be safe to return.

Elizabeth woke up to find floodwaters that had risen to the second step of the porch. Two more, and it would reach the house.

When daybreak came, the water was up to the third step.

Racing the rising flood, Elizabeth and her husband Richard Coleman started grabbing whatever they could to bring with them. Richard was worried about his two young children, who both have special needs, so he snatched up their clothes and medication. Most everything else, they had to leave behind.

Whiteville received at least 25 inches of rain during Florence.

By the time the Coleman family packed up and got rescued, the water reached the porch. The Coast Guard evacuated the Colemans by boat, carrying them through the cold waters that had turned their home into an island. Later, the Coast Guard went back to bring the family's six dogs and four cats to safety.

Have you ever smelled moldy bread? Take that and multiply it by 100.

Though they said they're grateful to be alive, the road ahead will be financially tough as they recover from the damage of Hurricane Florence. For thousands in the Carolinas like the Colemans, Hurricane Florence took out what little security they had.

Last week, Elizabeth and Richard stepped foot back in their house for the first time. Richard had to kick open the front door, swollen from water, to get inside. What they saw, and smelled, was worse than they imagined.

"Have you ever smelled moldy bread?" Richard asked over the phone after his first day back. "Take that and multiply it by 100."

The stench accompanies a new splotchy brown, black and white wallpaper of mold that stretches up and across the ceiling. Mold has also grown on their furniture, which lies tossed about in the house along with all of their belongings.

The place looks like it has been ransacked, they said. A box of Pampers diapers sat underneath a toppled refrigerator. Drawers spilled their contents onto the floor. Children's toys — dolls, racing cars, building blocks, stuffed animals — cover the floor next to splintered, deteriorating furniture. A dresser has been dumped into 2-year-old Alannah's pink, plastic Disney princess carriage bed frame from Walmart.

Above the floodwater mark circling each room like a ring in the bathtub, only a few items look untouched: painted wooden crosses bearing both of the Coleman children's names and the word "faith," a U.S.A. sign shaped like a heart, and a painted inscription on the door of each Coleman family member's name and birth information.

After floodwaters from Hurricane Florence entered the Colemans' home, the home looked like it had been ransacked. Elizabeth Coleman hide caption

After floodwaters from Hurricane Florence entered the Colemans' home, the home looked like it had been ransacked.

In bright blue paint it reads that the Coleman's oldest child, Stanley, was born on January 22, 2015, roughly 5 weeks premature, weighing 5 pounds, 4.8 ounces. He spent the first week of his life in the NICU. His younger sister Alannah's name sits to the right of his, in light purple. She was born two years ago, on September 2, 2016, just before Hurricane Matthew hit the same area.

Born 13 weeks premature, Alannah spent the first 100 days of her life in the NICU, and couldn't leave the hospital when Matthew hit. Instead, her parents had to leave her behind when the hurricane hit. Talking about the experience still makes Elizabeth cry.

This time, no one was left behind. But, the Colemans' lives haven't gotten easier.

Now, as a 40-year-old man, everything I worked for my whole life is gone.

Before Florence, the Colemans lived paycheck-to-paycheck. The family is $36,000 in debt to the hospital for two, uninsured, emergency surgeries Elizabeth had to treat appendicitis and kidney stones. She explained that she wasn't covered on her husband's health insurance because it would have cost additional money each month that they didn't have. What little extra they had went toward their kids. They had $0 in savings.

As he assessed the family's situation, Richard's voice was seeped in anguish. Normally a reserved man who doesn't show his emotions, he admits he is in despair. Now they have nothing: no house, no furniture, no cars, and no money besides a few $20s in their pockets.

"I've been working since I was 14 years old. Now, as a 40-year-old man, everything I worked for my whole life is gone," he said. "Everything is gone." 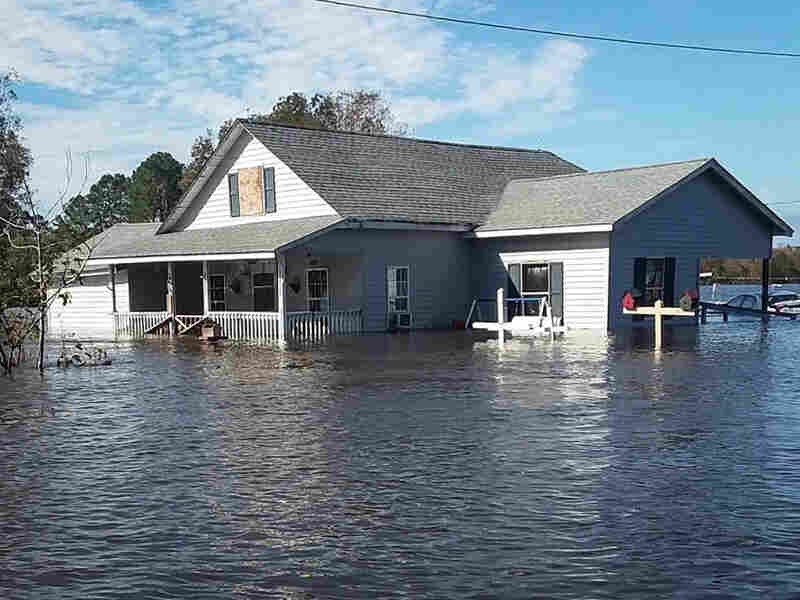 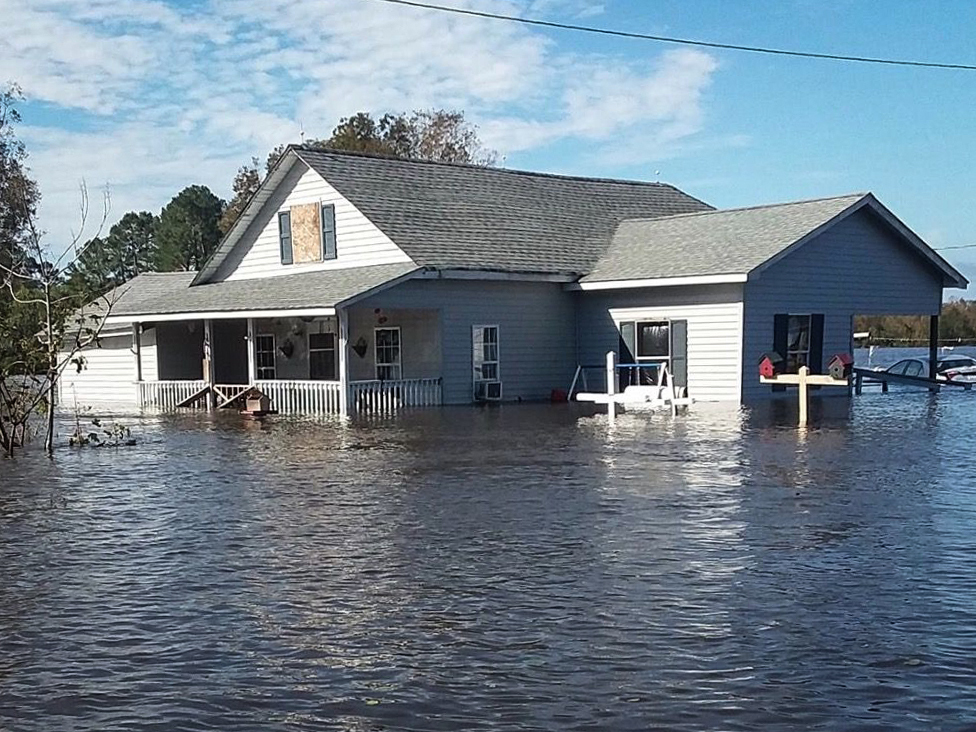 The Coleman family home, damaged beyond repair by floodwaters from Hurricane Florence.

His first job was as a bag boy at the grocery store. Now he works as a correctional officer at the Tabor Correctional Institution, and makes roughly $2,000 a month after taxes. He said he makes just enough not to qualify for government assistance. Richard said he plans to resign and look for a new, better job. He has already started applying.

Richard guesses the total losses are probably closer to $230,000, and their house will likely be torn down.

"The house is not really structurally sound," he said.

Their house is just one of many in the community with water damage, particularly on Crusoe Island Road, where Richard estimates that only a handful of houses escaped flooding from the nearby Waccamaw River. For the Colemans, it is the second time their property has flooded in the last 23 months. They don't plan to rebuild. Instead, they hope that they can sell the land back to the county.

It's like you get ahead three or four steps, then you go back 20.

"I'm gonna find a higher hill to live on," Richard said. "I've heard of other families that say they're leaving too. They can't go through this again."

The struggle to return to normal life

Figuring out the next step is a challenge. Currently, the Colemans are staying at Elizabeth's grandmother's house in Supply, N.C. Both Richard's 2014 silver Toyota Corolla and Elizabeth's 2013 Dodge Journey were totaled by flood waters, leaving Richard without a means to go to work and Elizabeth without a way to bring her children to medical appointments.

"We still got a lot to do, and now we need to figure out the house, the cars, and her surgery," Elizabeth said. "It's like you get ahead three or four steps, then you go back 20."

The days run together for Elizabeth. Feeling overwhelmed, she sometimes struggles to remember what day of the week it is. But, a naturally bubbly, positive person, Elizabeth reminds herself that they've beaten worse odds. When Alannah was born, doctors told her mother that she only had a 1 percent chance of surviving.

"We're going to get through this, we've already been through so much," she said. "It's like being back in the NICU, you just got to take it one day at a time."

The worst part is the wondering.

Wondering where they'll go next. Wondering how they'll be able to afford it. Wondering how long it will be before life goes back to normal. All they can do is wait, and keep fighting.

"It feels like getting hit in the face repeatedly. It's like a boxing match. You get knocked in the face. You go down," Richard said. "You have to get back up."

Though she soldiers on, Elizabeth doesn't feel like she's being strong. Sometimes, she cries all day.

Her family and religion are her driving forces to keep going.

Still, she is grateful. There have been small miracles in the devastation. Every person, and pet, in her family got out safe. A box of her daughter's formula that her husband carefully tucked in the corner of a high closet shelf before evacuation was left untouched. Red Cross and the Salvation Army have been offering them clothes and food. A friend set up a GoFundMe fundraiser for the family.

"You're just so thankful to know that there are people who do care, and want to help," she said, choking out the words. Barely audible between her sobs, she whispered, "It's just a lot."

As a self-described homebody, there's nothing that Richard wants to do more than to go home. He is homesick.

"I miss being home on the couch right now, playing with my kids," he said.

In a living room that isn't theirs, the children still play. Breath still shuddering from crying, Elizabeth let out an unexpected laugh. She said she was watching her son play with one of the dogs, each chasing the other around. Her son shrieked with laughter. She called out to him, "Y'all having fun there?"

Their lives are in pieces, but the Coleman family still preserves bits of home.