Accessibility links
Review: 'A Star Is Born' Shows Off Bradley Cooper And Lady Gaga At Their Best Bradley Cooper's directorial debut, in which he plays a singer battling addiction opposite Lady Gaga as an up-and-coming talent, is precisely the deeply felt musical melodrama it should be. 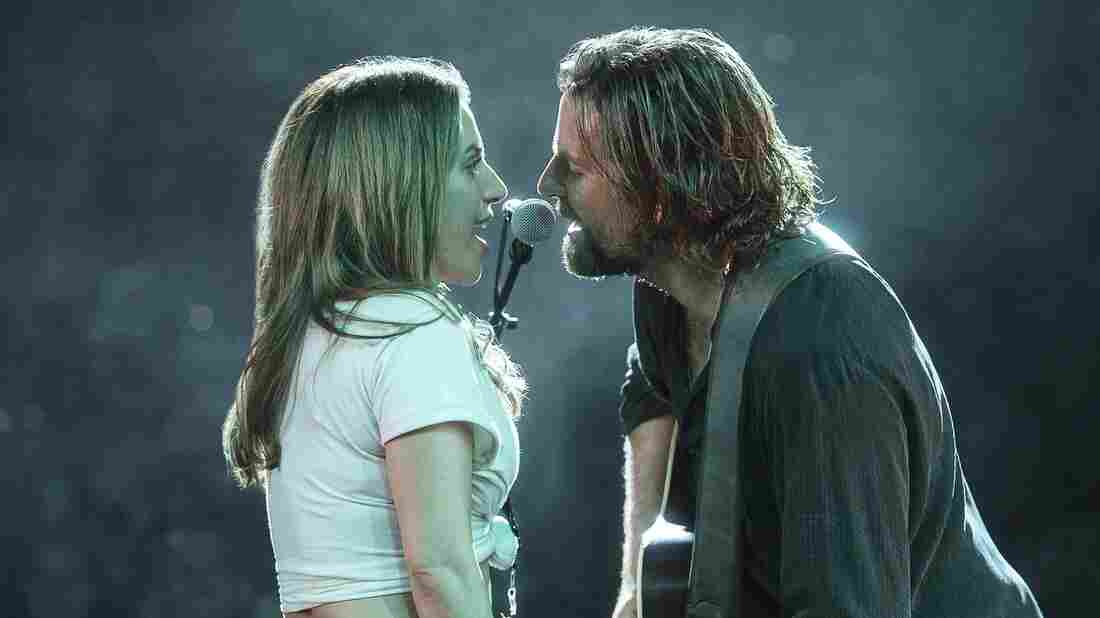 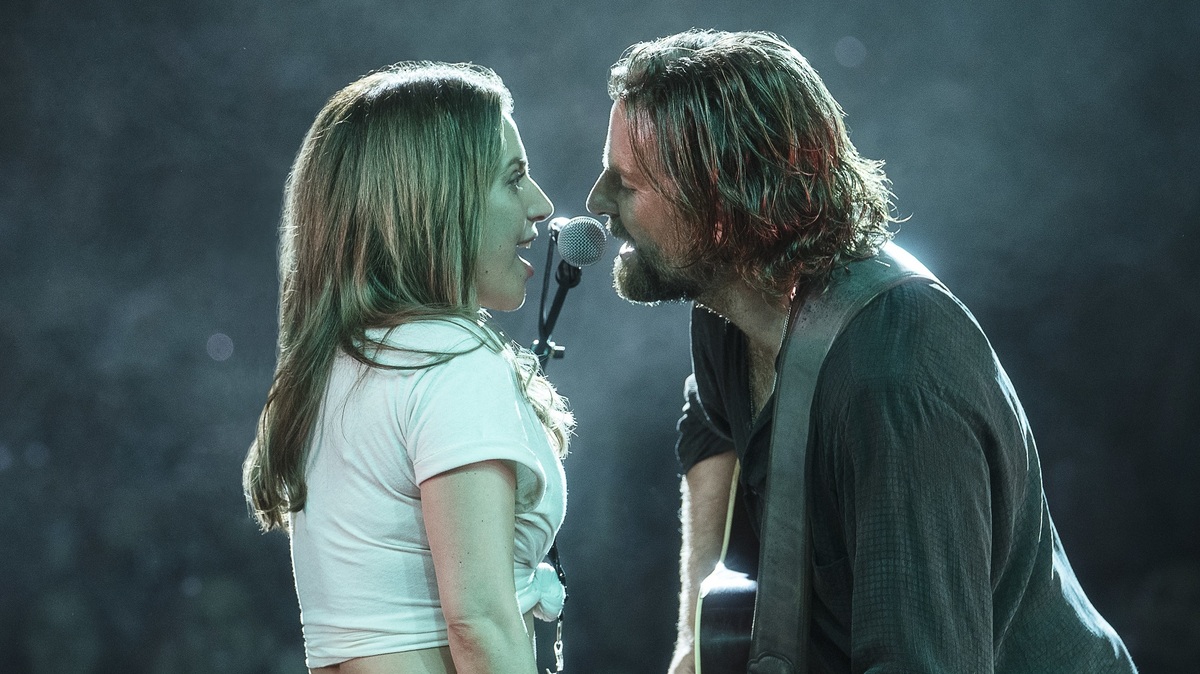 Lady Gaga and Bradley Cooper in A Star Is Born.

A Star Is Born begins with Bradley Cooper, as successful country-rock singer Jackson Maine, doing his uninspired but high-octane brand of guitar work in front of a screaming audience of fans. When he's done, drunk and exhausted, he pours himself into a big black SUV, now alone with his nearly empty bottle, his flushed face, and his lungs that sound like they're filled with ash. He is in rough shape.

Jackson, in search of anywhere he can drink more, winds up at a drag bar. There, knowing she's a guest among the queens, Ally (Lady Gaga) swans around the bar singing "La Vie En Rose," clearly doing what she has been, well, born to do. He recognizes her talent — and, like all emotional vampires both malicious and merely negligent, he recognizes a shimmering life force he might be able to pump into his own veins to restore himself. He sets out to bring her brilliance to the attention of the world. He continues to drink.

He is spiraling. She is blooming.

For Cooper, as a director making his feature debut — and, to a lesser extent, for his co-stars and for Eric Roth and Will Fetters, the two men who co-wrote the script with him — the existence of three previous versions of this story hangs over the project. The 1976 version had Joan Didion and John Gregory Dunne as two of its screenwriters; the 1954 version was written by Moss Hart and directed by George Cukor; the 1937 screenplay even brought in Dorothy Parker. Why poke the bear of comparison?

To put it another way: What is it about this story? Why has the story of A Star Is Born been told again and again in most of the same broad strokes: with Janet Gaynor and Fredric March in 1937; with Judy Garland and James Mason in 1954; with Barbra Streisand and Kris Kristofferson in 1976; and now with Lady Gaga and Bradley Cooper in 2018?

The basics remain the same: a talented newcomer to show business meets a seasoned veteran who also happens to be an alcoholic, and they fall in love. He is redeemed by her love, up to a point, but as she finds success and his power slips, he cannot bear it. There is ambiguity, though, about whether he cannot bear the drag that he has become on her greatness, or whether he cannot bear to be eclipsed and reminded of how far he has fallen. He doesn't know the difference anymore between his regrets and his resentments. He is a mess now, and she is a star. Which one of those things makes it too much?

There are two ways to structure the story. In 1937, we met Esther (Janet Gaynor), the newcomer, first. We saw her dream of going to Hollywood to become an actress (in only this version, the newcomer is not a singer). She is warned by her family that fame will come at a terrible price that she may or may not want to pay.

But in 1976, we began with John (Kris Kristofferson), the addict and star, showing up late to mollify an impatient crowd. When you see the man first — and you do in Cooper's version as well — the narrative balance shifts toward the part of the story that is about the difficulties of fame for those who already have it, rather than the pains of its acquisition for someone who doesn't have it yet.

Fortunately, the focus on Cooper benefits from one of his strongest performances. Jackson Maine (who, it's true, could have benefited from a slightly less "Rugged G. Desperado" name) is allowed to be fully in the grips of his addiction. In fact, there is a point when he and Ally seem to be approaching an intimate moment, and the film isn't afraid to tempt viewers to think that he — he, Bradley Cooper, a movie star — seems entirely too gross to sleep with right then. His condition prevents the scene from being sexy; it's just kind of depressing. Cooper looks leathery, clammy, haunted; Lady Gaga looks pretty but, obviously, much less glam than she's usually appeared in public.

She's very good here too, making Ally appropriately wary from the beginning of this man whose attention flatters her even as she flatly refuses to get on the back of his motorcycle when he's been drinking. She adores him, but she is never unaware of what she's getting into. It's hard to tell until you see it all together, but there's a reason why one of the most important refrains of the soundtrack's first single says, "I'm off the deep end; watch as I dive in." It is that, exactly, and the spread of her arms when Ally sings it is not just for a stage show.

The casting helps the film quite a lot across the board; the role you might reasonably think of as "the Sam Elliott role," Jackson's significantly older brother, is played by none other than Sam Elliott, and there is a moment — hard to describe in the abstract — in which his performance and Cooper's click together, so much that the audience I was with nearly gasped with recognition.

There are moments that seem a bit visually cliched; one of the notes I scribbled during my screening was simply, "Directors love wind farms." (They do, by the way.) But Cooper credibly builds a love story that's fraught from the beginning, even as it leads to soaring moments for both Jackson and Ally. The musical moments that are meant to seem enormous actually do, and the relationship is suffused with a specific, cocooning intimacy that foregrounds the difference between how close they feel to each other and how uneasy both are with their public standing.

Melodrama gets a bad rap sometimes. The term is swapped in for cheap storytelling or lazy filmmaking, and this is neither. But it is proudly, openly, resolutely designed to elicit an emotional response. It asks you to feel deeply, more than it asks for anything else.

And that means that if you happen to have notes at the end of the film that remind you that you did, for all the analysis you may attempt later, have goosebumps up your forearms, it would be wrong to pretend you didn't.