Accessibility links
Brett Kavanaugh Nomination Fight Leaves Supreme Court With Only 8 Justices The Supreme Court begins a new term with just eight justices, as the fight over Brett Kavanaugh's nomination continues. And for the first time in over 30 years, the court is left without a swing vote. 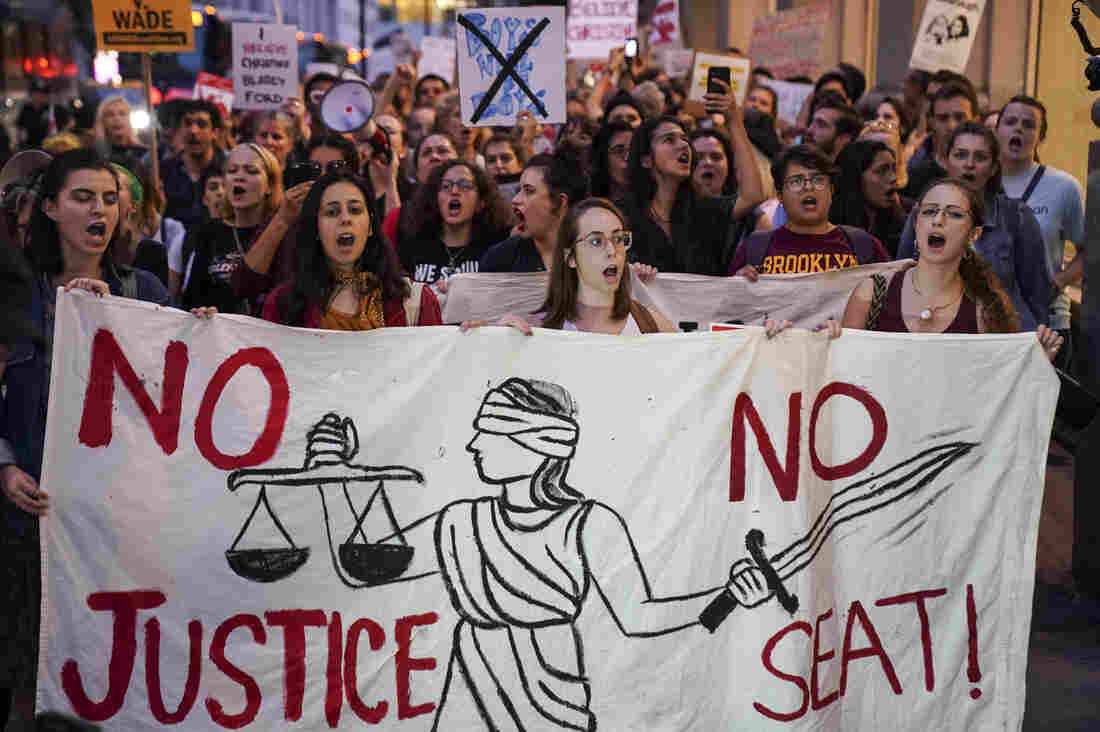 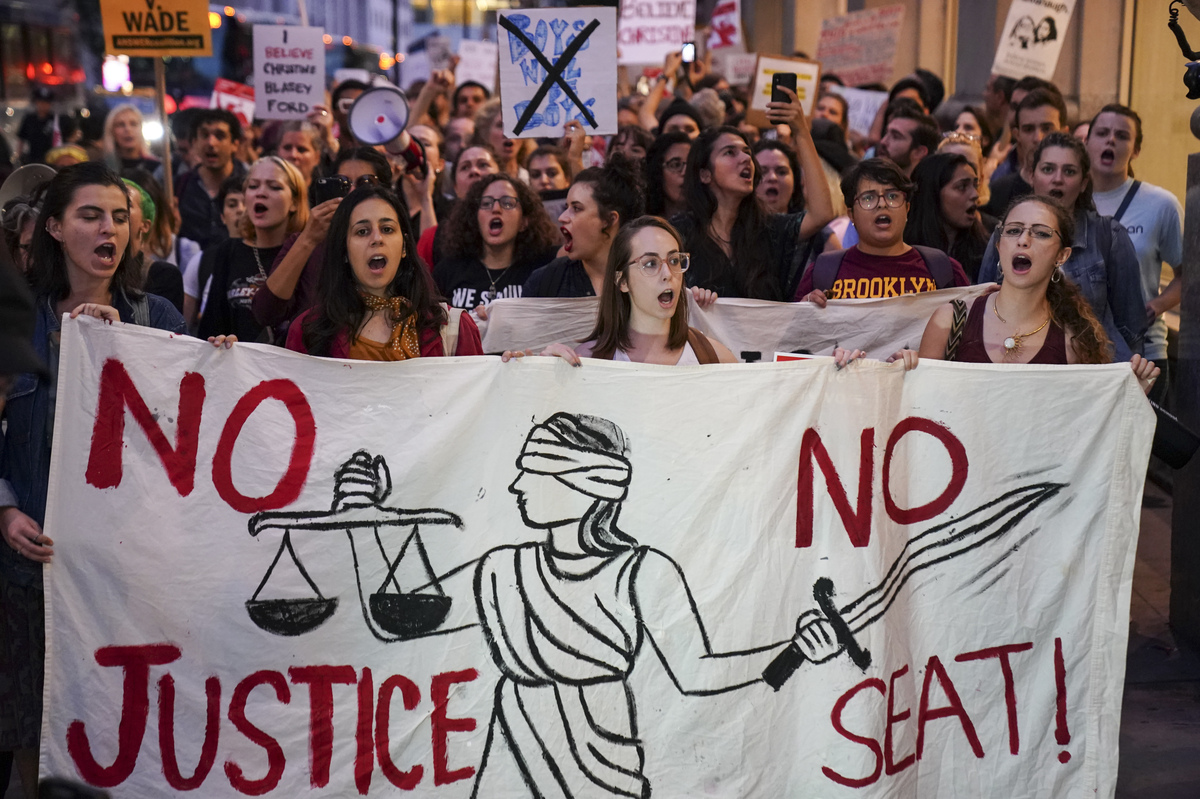 As the fight over the Brett Kavanaugh nomination continues to reverberate throughout the country, the shorthanded Supreme Court began its new term Monday. Republicans had hoped to seat nominee Brett Kavanaugh in time for the start of the term, but that, of course, did not happen.

Just like the beginning of the 2016 term, only eight justices sat on the bench when Chief Justice John Roberts opened the court term. In 2016, after the sudden death of conservative Justice Antonin Scalia, Senate Republican Leader Mitch McConnell held up President Barack Obama's nomination of Merrick Garland to the Supreme Court for almost a year, leaving the court with eight members until a newly elected President Trump could fill the seat.

The difference this time is that the eight-justice court is evenly split between conservative and liberal justices, with little wiggle room in many closely contested cases. In 2016, Justice Anthony Kennedy, a conservative who sometimes voted with the court's liberals, was still there.

Now he has retired, and for the first time in well over 30 years, there is no justice like Kennedy or Sandra Day O'Connor who sits ideologically at the center of the court.

On Monday, the action moved among the three branches of government like a Hollywood movie.

At the White House, Trump held a sun-dappled press conference to talk about his new trade deal, but inevitably, he faced Kavanaugh questions. Among them: Given how partisan Kavanaugh's performance at a confirmation hearing was last week, could the president assure the American people that Kavanaugh would deliver impartial decisions if he's confirmed to the court?

The president never really answered the question, telling reporters, "You'll have to ask him that question, but I can tell you he's been treated horribly."

Meanwhile, behind the scenes at the Capitol, the Republican leadership was trying to limit the scope of the FBI investigation that was forced upon them last week when three Republicans said they would not support Kavanaugh unless the FBI background investigation was reopened.

What that investigation entails remains an open question, with Republican Senate Majority Leader Mitch McConnell stressing the limited nature of the investigation, and Trump saying he wants a comprehensive, but short, investigation.

The consequences of a 4-4 split on the Supreme Court

While all these machinations were taking place, the Supreme Court began hearing cases. The liberal-conservative split was apparent in the first case argued, a challenge to a regulation under the Endangered Species Act.

The central player in the case was the dusky gopher frog.

The species lives in only one pond in Mississippi and is in danger of becoming extinct when the ephemeral pond that it lives and breeds in is gone. Ephemeral ponds dry up periodically and usually lack fish, so the frog's eggs don't get eaten.

Trump: 'Wouldn't Bother Me' If FBI Talked With All Kavanaugh Accusers

At issue in the frogs' case is whether the U.S. Fish and Wildlife Service can designate an area in Louisiana where the frogs once lived as a critical habitat in the hope that at some point in the future, the frogs may be moved back to this area, where there are more ephemeral ponds.

Weyerhaeuser, the timber company that leases the land, has challenged the designation as a potential threat to any future development plans.

On the steps of the high court after the argument, Noah Greenwald, the endangered species director at the Center for Biological Diversity, explained why Congress enacted Endangered Species Act in the first place.

"The web of life that we ourselves depend on is built of species," he said. "Ecosystems are made of species; we all depend on species for our food, our medicines, for clean air, for clean water."

Weyerhaeuser's lawyer did not come to the microphones.

But inside the court, the four liberal justices pointed to language in the Endangered Species Act that allows reasonable actions, like this one, as they see it. The court's conservatives complained that the U.S. Fish and Wildlife Service doesn't say what reasonable is.

A 4-4 tie would allow the lower-court ruling to stay in place, meaning Weyerhaeuser loses.

How fast the court gets a ninth justice depends on how quickly the Senate can ... hop along.

In the meantime, the justices will be hearing a wide array of cases, but none present the hot-button issues of abortion, gay rights or affirmative action.

Indeed, the justices seem intent on keeping their distance from those issues, at least for now. They recently postponed any decision on whether to hear a case that tests whether the federal ban on discrimination in employment covers gay and lesbian employees.

Among the cases granted this term, Kennedy's absence will likely be felt most strongly by defendants in death penalty prosecutions. On Tuesday, for example, the court will hear a case testing whether a death row inmate, Vernon Madison, who suffers from extreme dementia, can be put to death for a crime he no longer remembers.

Kennedy often voted with the four more liberal justices in death penalty cases — here, a 4-4 divided opinion would affirm the Alabama Supreme Court's decision to execute Madison. The Supreme Court has ruled in the past that an inmate must have a "rational understanding" of why they're being executed.

Other cases, though relatively minor on their own, may be harbingers of ideological shifts to come.

The court will hear at least three cases this term in which the justices are asked directly to overrule a decision in an earlier case. Considering the focus that respecting precedent (known in legalese as stare decisis) received during the first round of Kavanaugh's confirmation hearings, these cases will be important markers for how willing the court is to overturn established legal doctrine.

Author Of 'The Apprentice' Talks Of Getting Trolled And Sourcing Stories

In the case before the court, Terance Gamble was prosecuted for being a felon in possession of a firearm twice; first by Alabama and second by the United States. He claims that violates the Constitution's double jeopardy provision, and if the court were to agree, it would be overruling a century and a half precedent.

Some scholars worry that if the court decides to overrule itself and forbid state and federal prosecutions for the same crime, a president could immunize allies from state law prosecution by pardoning them after they have been prosecuted for a federal crime.

Thus, if onetime Trump campaign chairman Paul Manafort, who was convicted of federal tax and bank fraud, were to be pardoned, under current Supreme Court precedent, he could still be charged for some of the same crimes under state law. But perhaps not if the 1852 precedent were to be reversed.

On Tuesday, the court will hear a case that tests the "nondelegation doctrine." The doctrine, in theory, prohibits Congress from granting legislative power to executive branch agencies. The court has used it only twice in its history to strike down acts of Congress.

Both of these decisions came in 1935, in reaction to vast grants of power to agencies during the New Deal. Now comes a case that could revitalize the nondelegation doctrine in an era when, like the New Deal, conservatives decry the expanding administrative state.

The case before the court deals with a federal sex offender registration statute. Under the Sex Offender Registration and Notification Act (SORNA), Congress gave the attorney general the power to decide how to apply the 2006 law to offenders whose crimes occurred prior to that date.

Herman Gundy was convicted of rape in 2005, and in 2008, the attorney general applied the registration provisions of SORNA to him retroactively. He violated the law after he was transferred from a prison in Pennsylvania to a halfway house in New York because he crossed state lines and failed to register.

He argues that SORNA granted open-ended power to the executive to decide what qualifies as criminal under the statute and therefore violates the non-delegation doctrine.

Next week, the court will hear a case that could give the federal government the power to indefinitely detain, without a bond hearing, all immigrants who have committed certain crimes.

Eduardo Padilla is one of the immigrants who challenged the Trump administration's position. A legal permanent resident since coming to the United States as a toddler in 1966, Padilla was convicted of a firearm offense and served six months in jail and was released in 2002.

Eleven years later, Immigration and Customs Enforcement detained him initially without a bond hearing because, under federal law, that conviction made him deportable. He argues that because ICE did not arrest him promptly after his release from prison, he does not qualify in the class of immigrants that ICE can hold without such a hearing.