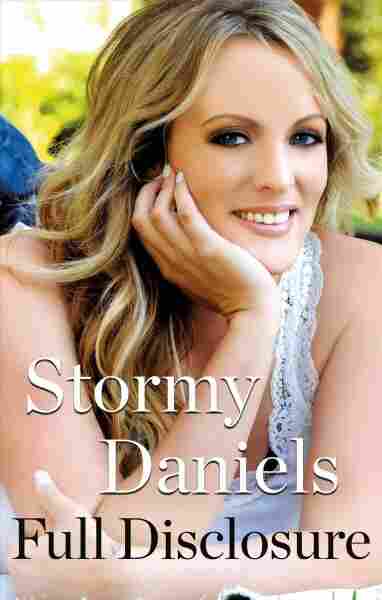 Daniels, whose real name is Stephanie Clifford, will be unsurprised.

In the past two years, Daniels has stopped being a person and started being shorthand. To Trump and his team, she's a threat to the presidency. To his detractors, she is a personification of all the sordidness that clings to Donald Trump — affairs, money and sleaze.

Stormy Daniels knows this, and her memoir Full Disclosure is a canny Trojan horse of a book. She knows exactly why you are reading it and — a career entertainer — gives the people what they want: that is, "two to three minutes" and "smaller than average."

Here are a few things you might not know about Stormy Daniels. In 2009, she announced plans to run for a Senate seat (slogan: "Stormy Daniels: Screwing People Honestly"), but she ran out of money and someone blew up her campaign manager's car with a Molotov cocktail.

She is a thrice-divorced Republican who loves hair metal. She's a competitive equestrian. She was the editor of her school paper. Her improbable breasts are named Thunder and Lightning. "I've had the same implants since 1999 — they're almost old enough to drink," she jokes.

Daniels' voice is warm, expletive-laden and boastful. She knows how to get ahead and has no qualms about doing it: "I am a firm believer in capitalism. And I noticed that the girls at the Gold Club who invested in breast implants got more tips."

We never seem to hear about that fact, with all the drive and skill it suggests. "As a director," the New York Magazine journalist, Lissa Townsend Rodgers, writes, "she has ambitions beyond the usual vignettes of seemingly random strangers banging each other in half-furnished condos. Her films have character, dialogue, plot, and setting."

In her memoir, Daniels writes passionately and well about the craft of both directing and dancing. At one point, she compares stripping to storytelling (early on, she notes how she wanted to be a writer): "You're a ringmaster, clown, lion, tightrope walker, magician, and magician's assistant all in one. Your clothes have to tell a story, and like any story, there have to be layers and reveals to keep people focused on you. There's a reason one of the first things I did when I planned out my act was to learn how to blow fire."

Lately, it seems like when a woman tells her story in public, it detaches from her and enters a surreal automated process, independent of her life and wishes. It becomes a kind of pinball, batted about violently by different sides for a little bit until it stops being useful. It becomes his story, not hers, and then it disappears altogether.

Full Disclosure, with its carefully spaced revelations and its emphasis on the larger context of Daniels' life and work, is the product of someone fighting to stay in control of a story — perhaps in part because she is so used to being written off. ("It's amazing what blond hair and big boobs instantly do, by the way. Everyone thinks you're stupid, but they sure want you around.")

Daniels insists that she is more than an extra in the predictable and gross saga of Donald Trump. After all this time, she is not going to give up the director's seat.