Accessibility links
Mexico's 1968 Tlatelolco Massacre Of Protesters: What's Changed, What Hasn't Fifty years ago, government forces opened fire on a student-led protest in Mexico City. Some say the repression opened a path for democratic change; others say a legacy of impunity has endured. 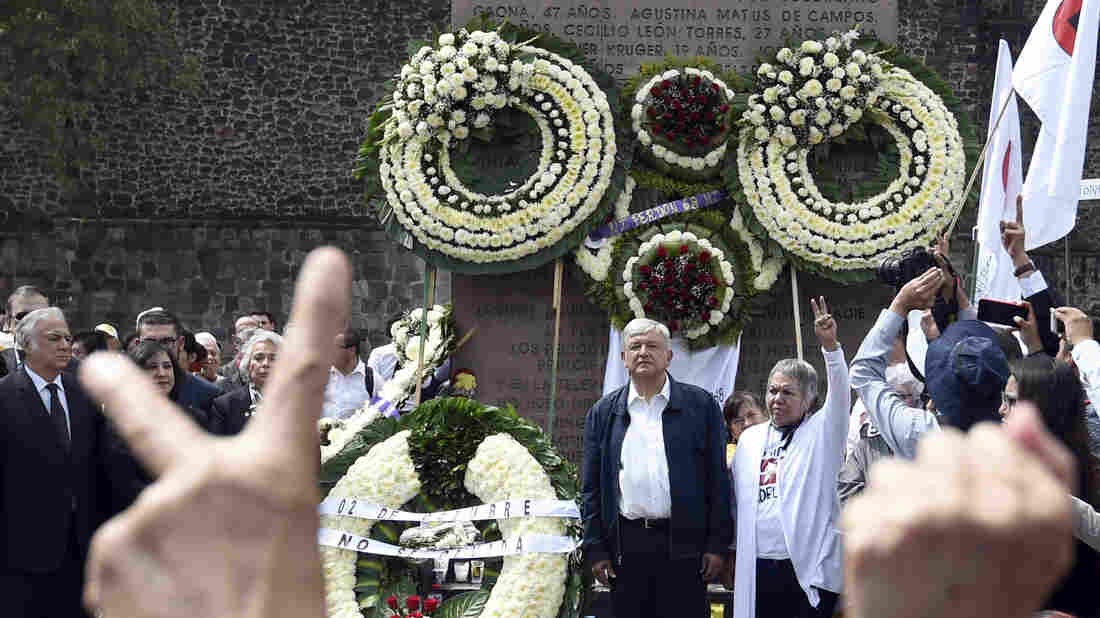 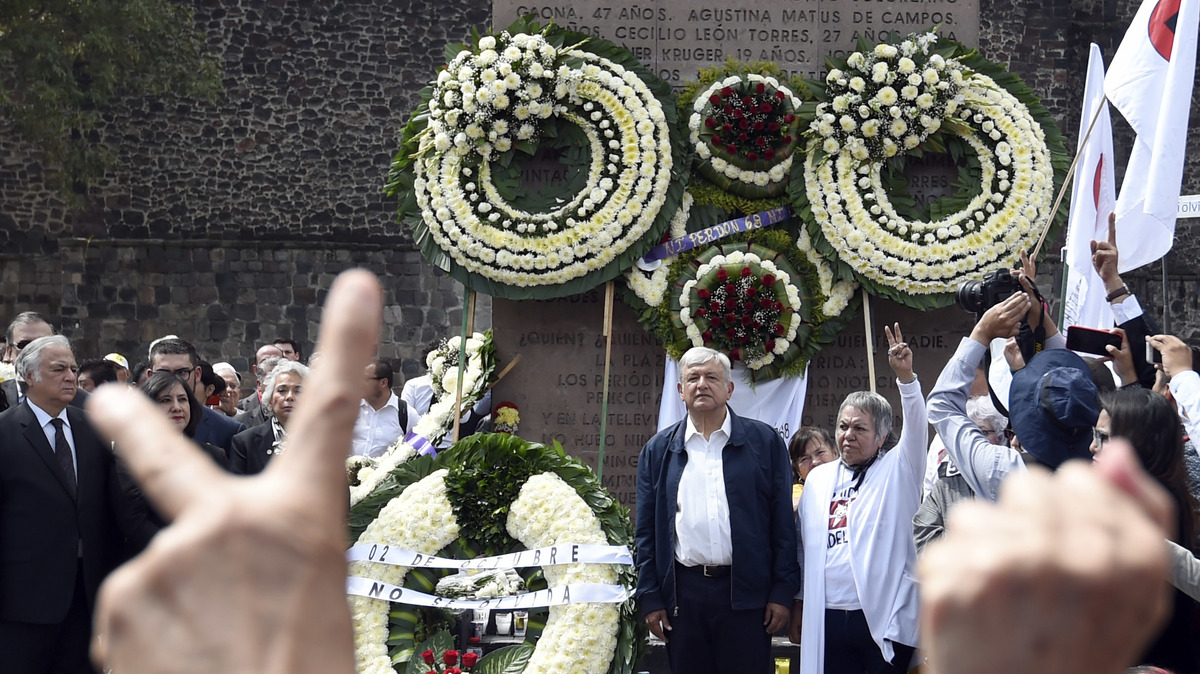 Mexican President-elect Andres Manuel Lopez Obrador, center, stands Tuesday with Ana Ignacia Rodríguez Marquez, a former leader of the student movement of 1968, at a ceremony marking the 50th anniversary of the 1968 Tlatelolco massacre, at the Tres Culturas square in Mexico City.

The following story is part of an ongoing NPR series remembering the cultural and political upheaval of the year 1968.

Fifty years ago this week, government forces in Mexico fired on thousands of student protesters gathered in a public square in the capital. Scores, and possibly hundreds, died. Like many other worldwide movements of the 1960s, Mexico's students were demanding greater freedom and democracy.

Huge marches took place throughout the summer of 1968. In one that nearly filled the expansive Zocalo plaza in downtown Mexico City, a student leader cried out to the crowd: "We are living the freedom of the streets. We want that freedom throughout the country." He called for an end to the repressive one-party rule that had gripped the country for decades.

The period in Mexico was one of economic prosperity. Decades-long growth had created a burgeoning middle class, to which many of the protesters belonged — including Marie Claire Acosta, then a 20-year-old political science student at the Autonomous National University.

"We were going to a public university, we had all of these privileges, but we wanted democratic space," Acosta told NPR in an interview.

Inspired by student movements in France and Czechoslovakia, as well as the anti-Vietnam War protests in the neighboring United States, Mexico City's demonstrators spent July and August clashing with soldiers and police. By September, then-President Gustavo Díaz Ordaz said enough was enough.

"We have been tolerant ... but there are limits," he said in a national address.

The eyes of the world were on Mexico at the time; the country was only weeks away from playing host to the Summer Olympics, making it the first Latin American country to do so. Díaz Ordaz did not want to be embarrassed by what he considered malcontent agitators.

On Oct. 2, 10 days before the opening ceremony, thousands of defiant students filled the Plaza of the Three Cultures in the city's northern Tlatelolco neighborhood. The square is surrounded by buildings from three distinct time periods: ruins from the Aztec civilization; a church from the Spanish colonial era; and tall, modern buildings.

Law student Ana Ignacia Rodríguez Marquez was a leader of the movement. Sitting in the plaza recently, she recalled seeing a helicopter circle above, which shot flares into the crowd. A hail of bullets followed, she says, from snipers atop a nearby apartment building and from soldiers at street level.

"I froze," says Rodríguez, now 74. "I never thought they were real bullets."

Rodríguez says she saw her fellow students fall to the ground, shot. She points toward the Aztec ruins and recalls crawling over its stone walls, through the dirt paths and to safety out to the nearby boulevard.

At the time, the official media blamed the violence on student agitators and put the death toll at around 26. Activists and researchers, however, say it could have been as high as 300. It wasn't until just last week that a government official for the first time admitted the massacre was a state crime.

Rodríguez, like hundreds of students, was rounded up by Mexico's security forces, tried, and imprisoned for years.

After her release, she says she never went back to the law; instead, she spent decades as a local government administrator. Many of her fellow compatriots, however, took up arms.

Sergio Aguayo, a student activist in 1968, and now a professor at the Colegio de Mexico, says that throughout the 1970s and into the '80s, dozens of guerrilla movements emerged and were brutally repressed. Aguayo, now 71, says he rejected violence.

"We were not going to have a revolution, because we were the neighbors of the U.S. and the Mexican authoritarian regime was supported by Washington — so we were on our own at that time," he says.

It would take until the year 2000 for Mexico's one-party rule to end, with the election of President Vicente Fox of the conservative party known as PAN. But Aguayo says that through those decades, civil society matured and democratic institutions were built.

"We have an electoral system that works well; we have competitive elections; we have a lot of institutions, yes," she says. "Have we ended impunity? No."

43 Missing Students, 1 Missing Mayor: Of Crime And Collusion In Mexico

Since 2006, when Mexico began a sweeping war on drug trafficking, as many as 200,000 people have died and tens of thousands have disappeared — including the case of 43 college students who went missing in 2014. The government insists a drug gang killed the students and burned their bodies, But independent investigators, the students' relatives and most Mexicans dispute that official version.

Last month, on the fourth anniversary of the student's disappearance, protesters once again took to the streets, demanding justice in the case.

In looking at the current fight for justice and democracy, 23-year-old Samara Vizuet says Mexicans must remember the past.

"We know we are the children of '68," she says. If not for them, she adds, the students of today would not be out protesting in the streets.