Accessibility links
DHS Watchdog Finds 'Significant' Health And Safety Risks For Immigrants At ICE Center A May inspection found "serious issues" at a California facility, including nooses made out of sheets in some detainee cells. 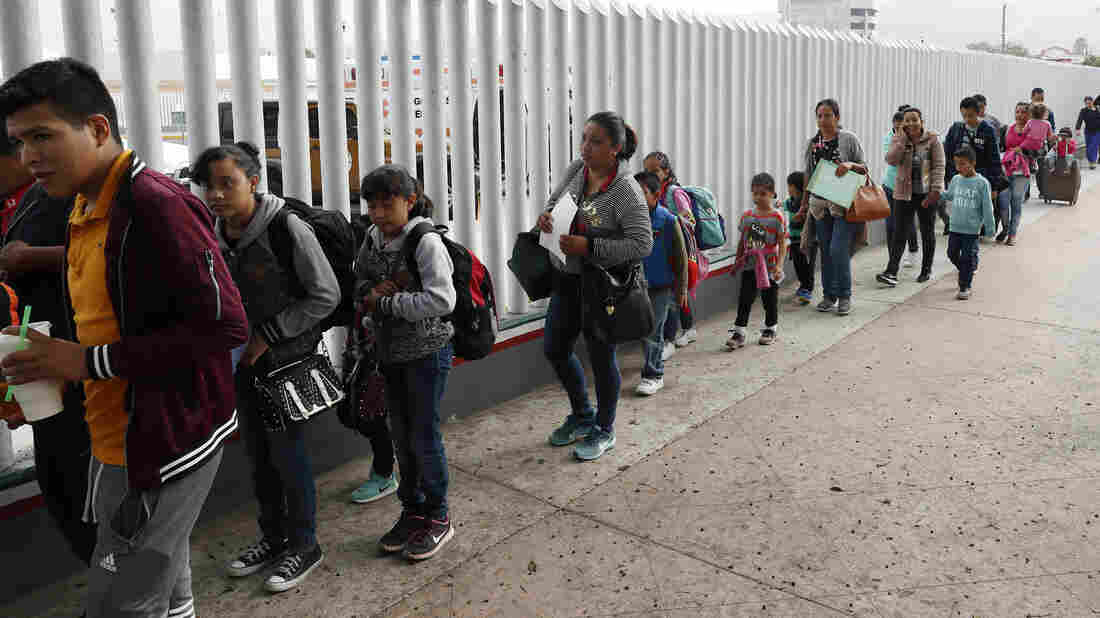 People line up to cross into the United States to begin the process of applying for asylum near the San Ysidro port of entry in Tijuana, Mexico. Homeland Security's watchdog says immigration officials were not prepared to manage the consequences of its "zero tolerance" policy at the border. Gregory Bull/AP hide caption 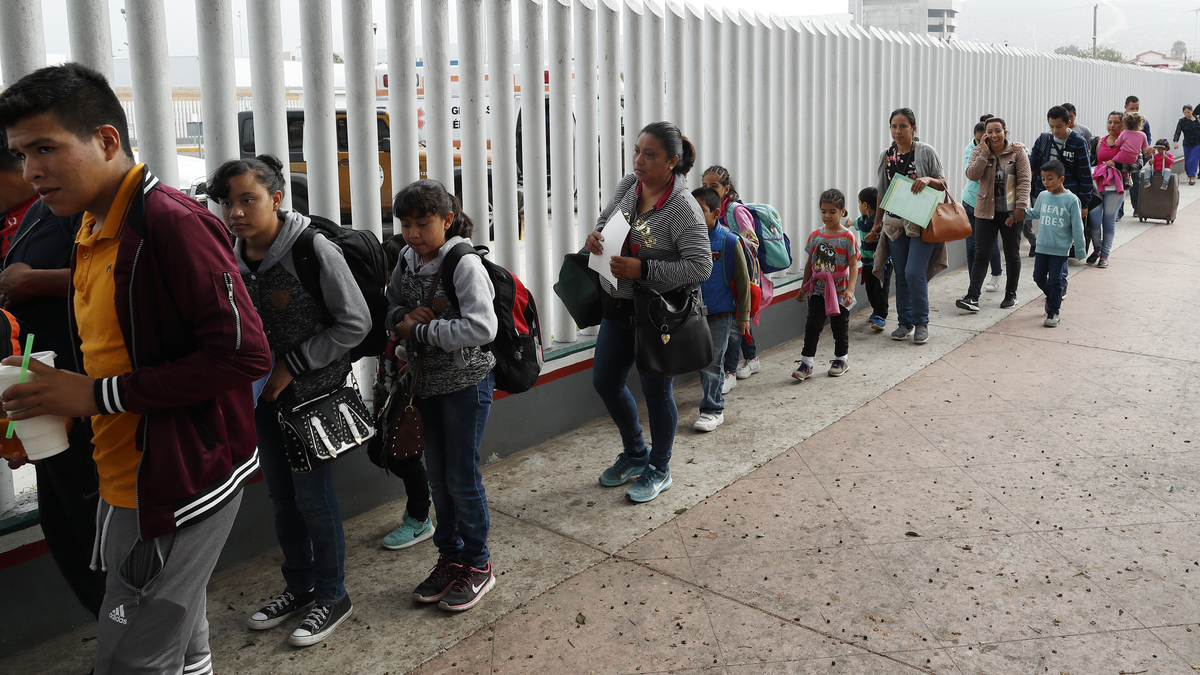 People line up to cross into the United States to begin the process of applying for asylum near the San Ysidro port of entry in Tijuana, Mexico. Homeland Security's watchdog says immigration officials were not prepared to manage the consequences of its "zero tolerance" policy at the border.

Two new reports from the Department of Homeland Security's internal watchdog say the agency was unprepared to implement the Trump administration's family separation policy and detail health and safety risks at a California ICE processing facility.

Administration officials said its family separation policy was needed to discourage illegal immigration. But President Trump abandoned it amid widespread outrage after more than 2,600 children were separated from their parents.

One report from the DHS Office of Inspector General echoes many of the complaints raised by immigrants' rights advocates — that the agency held migrant children beyond the legal limit and then struggled to identify and reunify families when the separation policy ended.

In a separate report also released Tuesday, the DHS watchdog detailed the results of a surprise inspection of the Adelanto ICE Processing Center in Southern California. That May inspection found "serious issues...that pose significant health and safety risks" at the facility, including nooses made out of sheets in detainee cells. The report highlights at least seven attempted suicides at the facility. Here are some of the reports' findings:

When the the administration's "zero tolerance" policy officially took effect in April, many parents who were suspected of crossing the border illegally were charged with a federal crime. That meant they had to be separated from their minor children, who could not be held in criminal custody.

By law, migrant children who are considered "unaccompanied" should be placed in the care of Health and Human Services within 72 hours, except in "exceptional circumstances."

But the watchdog report found that migrant children were routinely held at Border Patrol facilities for longer. Many were held in metal cages designed only for short-term detention. More than 800 children were held for longer than the three day limit at Border Patrol facilities in the Rio Grande Valley and El Paso sectors, according to the report, with one child held for 25 days.

In a written reply, DHS said that the placement delays were due in part to lack of placement options at HHS. "The care and transfer of unaccompanied alien children is a critical operational priority that is carefully and robustly managed," DHS said in a statement.

Long waits at ports of entry

Under the "zero tolerance" policy, the administration encouraged migrants to present themselves at official ports of entry to seek asylum in the U.S. But at the same time, the OIG report found that U.S. Customs and Border Protection was limiting the number of asylum-seekers it would admit through those ports under a practice known as metering.

"CBP managed the flow of people who could enter at those ports of entry through metering, which may have led to additional illegal border crossings," the report concluded.

Homeland Security officials dispute that finding. In a written response, DHS said that it was employing "queue management" practices at ports of entry, but denied any connection between that policy and the "zero tolerance" policy that led to family separations. The two are "separate and distinct," and according to the statement.

The watchdog report describes a chaotic process where agencies had difficulty sharing information with each other, or with distraught parents who were trying to locate their children.

The lack of integration between electronic record systems at CBP, Immigration and Customs Enforcement and HHS made it harder to identify and track parents and children, according to the report.

On June 23rd, DHS announced that it had "a central database" that allowed DHS and HHS to share information about the locations of migrant parents and children. But the OIG report found "no evidence that such database exists."

Rather, the OIG found, the agencies sometimes communicate with one another by entering information into Microsoft Word documents and attaching them to emails.

"Each step of this manual process is vulnerable to human error," the report concluded, "increasing the risk that a child could become lost in the system."

In its written response, DHS acknowledges that key electronic tracking systems cannot communicate with each other. But despite that, "the government took exhaustive efforts" to reunify families "expeditiously," after it was ordered to do so by a federal judge.

According to the government's latest court filing, more than 130 children are still separated from their parents.

The Adelanto detention facility, owned and operated by the GEO Group, Inc., houses nearly 2,000 immigrant detainees. During a May inspection, the OIG found nooses made out of sheets in detainee cells, overly restrictive segregation practices and inadequate medical care for detainees.

The report, separate from the one on family separation, highlighted the suicide of a detainee in March of 2017 after he was found hanging by bedsheets. In all, the report found at least seven attempted suicides at the facility. "ICE's lack of response to address this matter at the Adelanto Center shows a disregard for detainee health and safety," the report concluded.

The inspectors also found that the Adelanto Center was improperly disciplining detainees by segregating them from the rest of the population without finding them guilty of a rule or regulation violation. Detainees did not have timely access to medical or dental care, according to the report.

With regard to dental care, the inspectors found that no detainees had received fillings for cavities identified by dentists in the last 4 years. "One detainee we interviewed reported having multiple teeth fall out while waiting more than 2 years for cavities to be filled," wrote the inspectors.

The report concluded with one recommendation: that Immigration and Customs Enforcement conduct a full review of the detention facility and the GEO Group's management. ICE concurred with the recommendation and a full inspection is scheduled to begin October 10, 2018.