Accessibility links
Latino Votes Crucial In Nevada, As Culinary Union Focuses On Turnout Dean Heller is the only Republican in the Senate up for re-election in a state that Hillary Clinton won. Latino union workers are a key voting bloc for his Democratic opponent, Rep. Jacky Rosen. 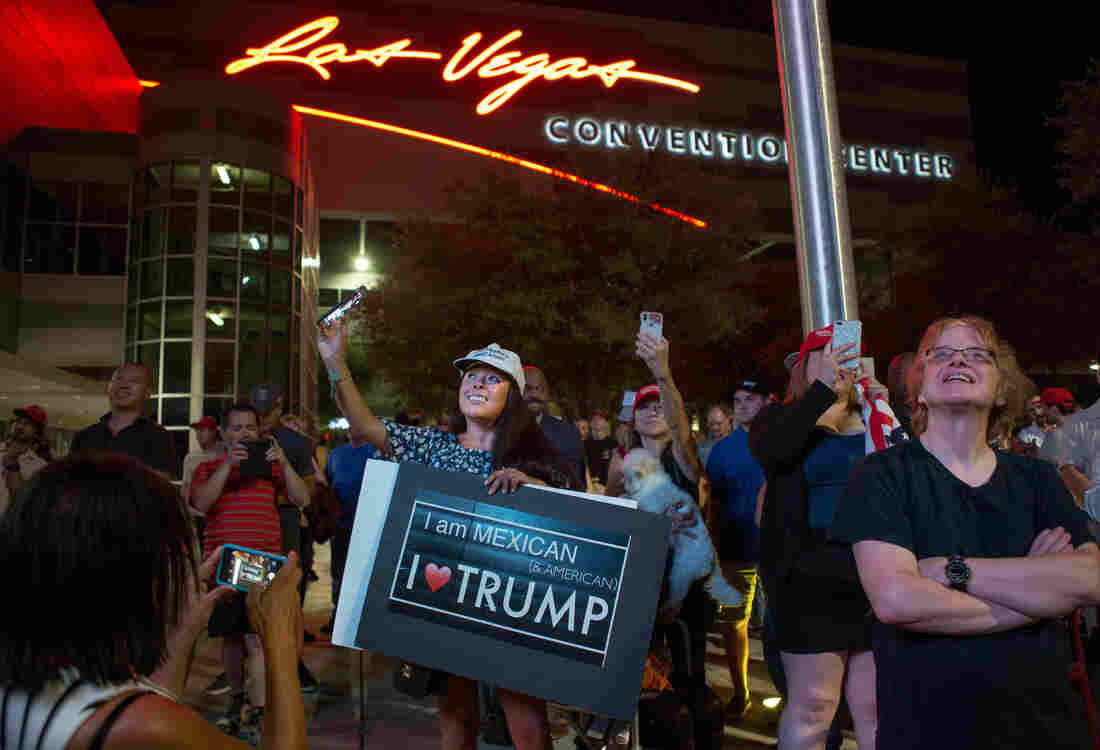 Supporters gather outside the Las Vegas Convention Center as they watch President Trump's rally on screens in the parking lot on Sept. 20. Allison Shelley for NPR hide caption 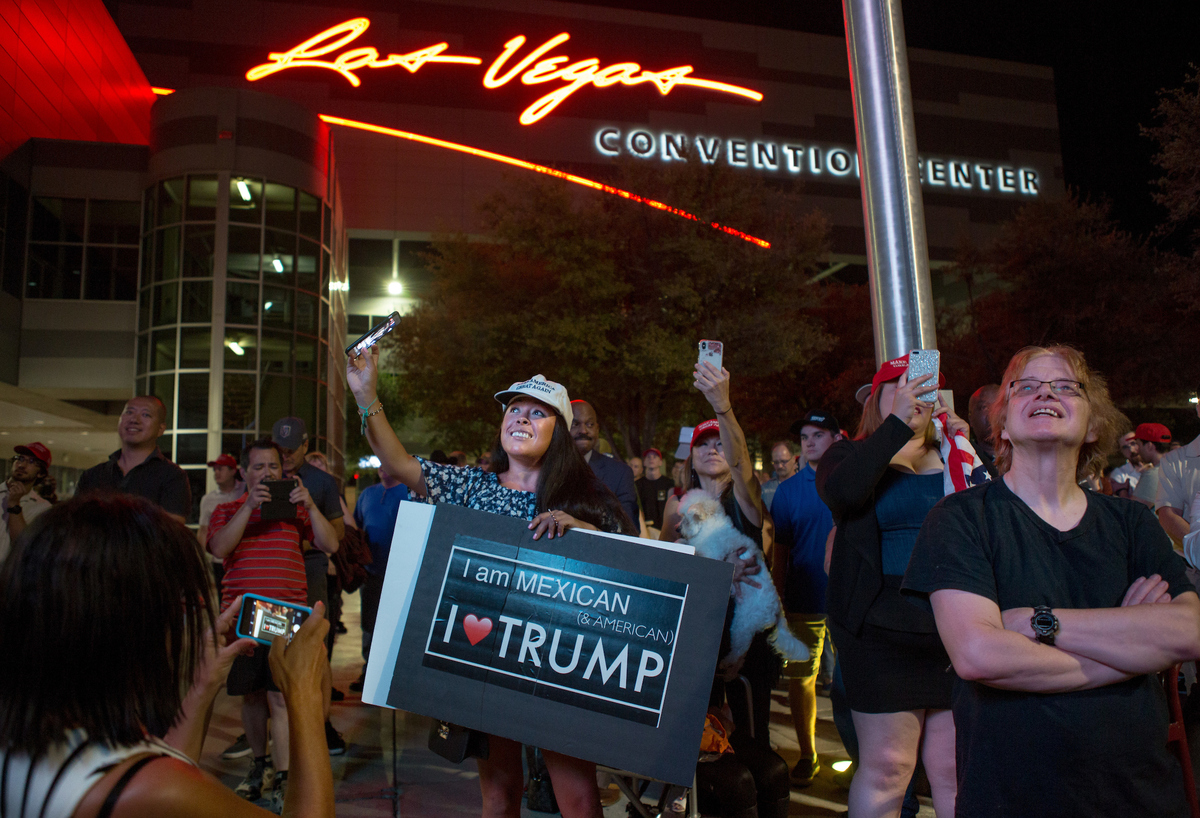 Supporters gather outside the Las Vegas Convention Center as they watch President Trump's rally on screens in the parking lot on Sept. 20.

For all the talk of how Democrats running for re-election in states President Trump won are a protective shield for Senate Republicans, Nevada's Dean Heller has the opposite problem.

He is the only Republican senator up for re-election in a state that Democrat Hillary Clinton won in 2016. The candidate challenging him for the seat is Democratic Rep. Jacky Rosen. "Right now, the Republicans have all three branches of government," Rosen said. "So what we can do is try to hold their feet to the fire every way we can, because we don't have the votes to win."

For Nevada, that means this state of only about 3 million people plays an outsize political role in this year's midterm elections. Republicans and Democrats are competing in tight races — not just for the Senate, but for the House and gubernatorial seats. For Democrats who had failed expectations to win the White House and the Senate in 2016, Nevada was a rare bright spot on the map, going blue by the slimmest of margins for Clinton and freshman Sen. Catherine Cortez Masto. 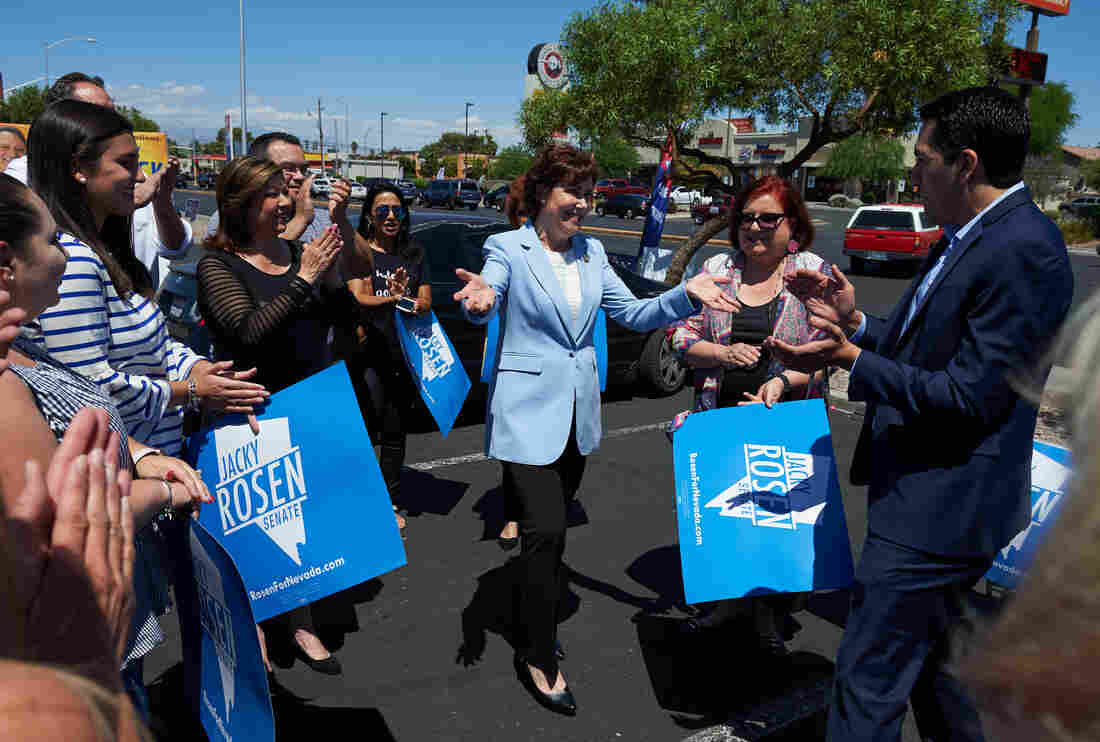 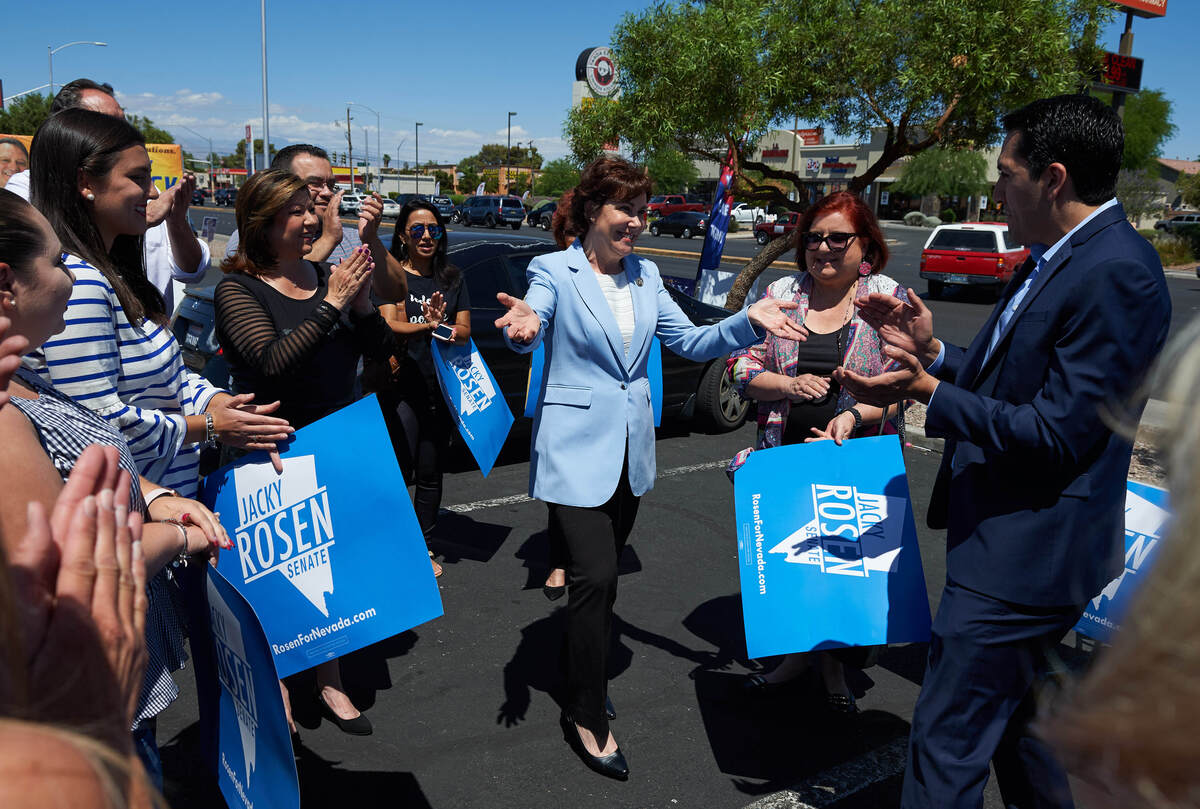 Rep. Jacky Rosen (center), the Democratic U.S. Senate candidate in Nevada, greets supporters ahead of early voting at Cardenas Supermarket in Las Vegas on May 26.

Part of the reason for that was the state's increasing diversity. Latinos make up about 28 percent of the population of the state, and that number is growing. David Damore, a professor of political science at the University of Nevada, Las Vegas, says their participation was critical to the places where Democrats found success in 2016, citing a precinct-by-precinct analysis of the Latino vote that he helped conduct.

"It's pretty stunning on that," Damore said. "So you know, you're looking at the order in those races of 80-20 voting Democratic in those races there."

The vast majority of Latinos in Nevada vote for Democrats, and Rosen hopes they can help her defeat Heller and whittle away at the GOP majority.

Republicans are relying on the white rural vote to come out strong. But if they can shift at least some of the Latino vote in the state, it will be vital for protecting Heller's seat. 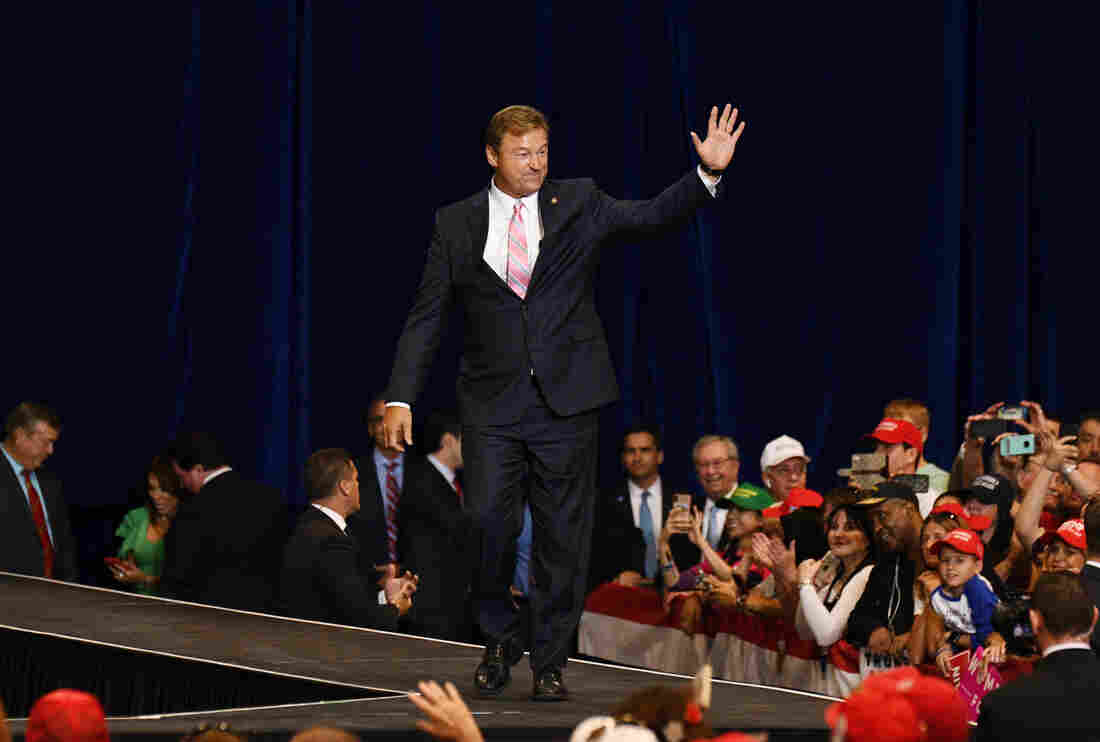 Dean Heller waves as he arrives at a rally with Trump (not pictured) in Las Vegas on Sept. 20. He is the only Republican in the Senate up for re-election in a state that Hillary Clinton won. Bridget Bennett/Getty Images hide caption 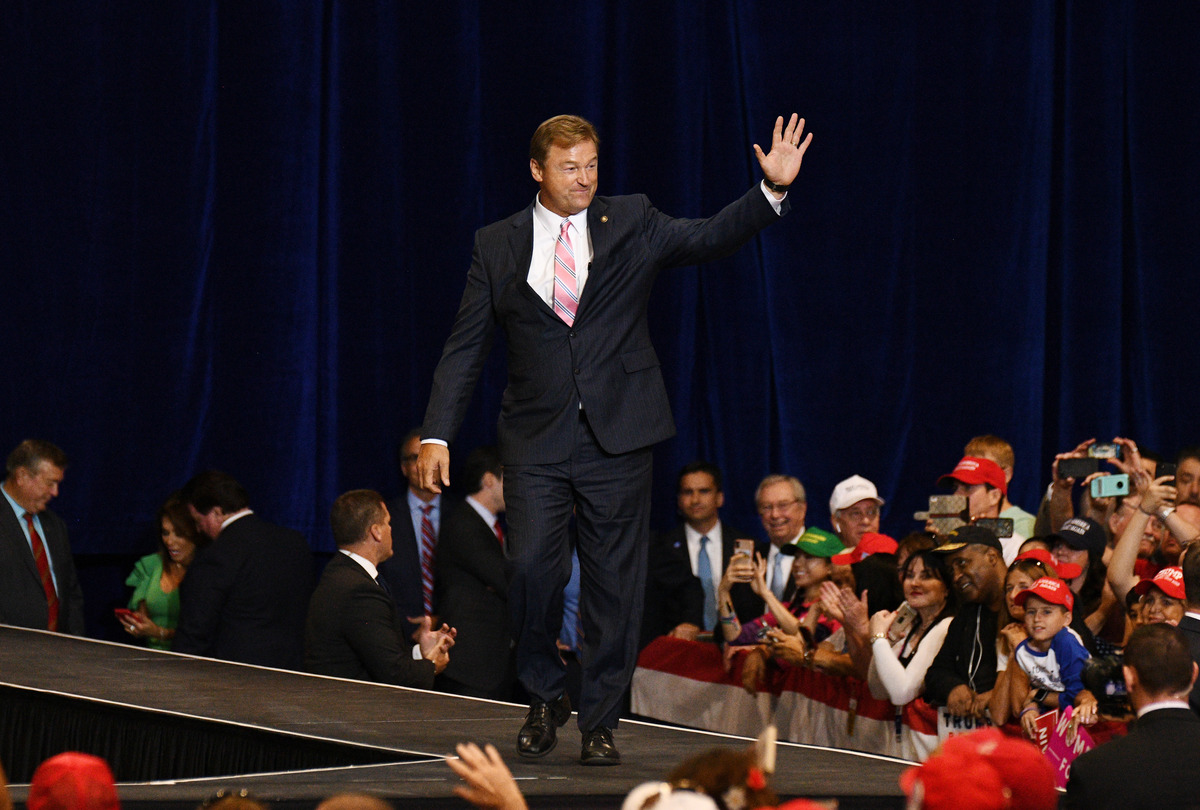 Dean Heller waves as he arrives at a rally with Trump (not pictured) in Las Vegas on Sept. 20. He is the only Republican in the Senate up for re-election in a state that Hillary Clinton won.

The challenge is to engage the Latino population. Most of those in Nevada are not native born and they have strong ties to their home countries, which means they tend not to dive into U.S. politics.

That's true even more so during midterms, when voter turnout is historically low. In the last midterm election in 2014, there was about a 50 percent drop in Latino voting compared with 2012, a presidential election year. Pollsters described it as falling off a "cliff," which helped Republican candidates.

A key organization Democrats rely on to turn out the vote is the Culinary Union. Bethany Khan, spokesperson for the union, says it is the state's largest immigrant organization.

"Fifty-seven thousand members — about 55 percent women, 54 percent Latino — so it is a majority people of color, women, immigrant organization," she explained.

"It's going to have a huge impact on this race," said Jon Ralston, editor of The Nevada Independent. "They could help put Jacky Rosen over the top, but if they're not all in, that could help Heller."

On a recent weekday at the union's headquarters, Rosen addressed a room of about 100 union workers preparing to head out and canvass for her. She spoke on issues that she hopes will motivate the members — health care and immigration. "We are going to fight for DREAMers, and we are going to fight for a fair immigration system," she told the hospitality workers. "And I have to tell you, too, if you don't have your health, you don't have anything."

Rosen is a first-term congresswoman and she doesn't have a lot of statewide name recognition, but the area south of Las Vegas is her home turf. Some of the most populous parts of the state are in her district. Before running for office, Rosen served as the president of the largest Jewish temple in Nevada, Congregation Ner Tamid.

When she was younger she was a waitress during summers in Las Vegas and was a member of the Culinary Union, something she reminded the crowd of union members she addressed.

After the speeches were over, Fransisco Benitez and Telma Vasquez, two of the Hispanic union members at the event, jumped in their car and headed to their assigned neighborhood. They went door to door in the scorching afternoon heat, trying to encourage their fellow union members to vote.

One of the first people they visited was Armando Saenz. He is a lively 78-year-old retiree with four children, nine grandchildren and one great-grandchild. He came to the United States from Mexico in the 1970s. Benitez shows him pamphlets with Rosen's face on it, but Saenz was having none of it.

"They are tricksters and liars, like all politicians," he said. "When the moment comes, they don't do anything for us." Saenz acknowledged that he is angry at the current administration's immigration policies but said he does not have a favorite party. Benitez and Vasquez, however, tried to persuade him, using a last-ditch pitch.

"It's for the future of our children," Vasquez said, hoping this would be enough to persuade Saenz to come out to vote in November. 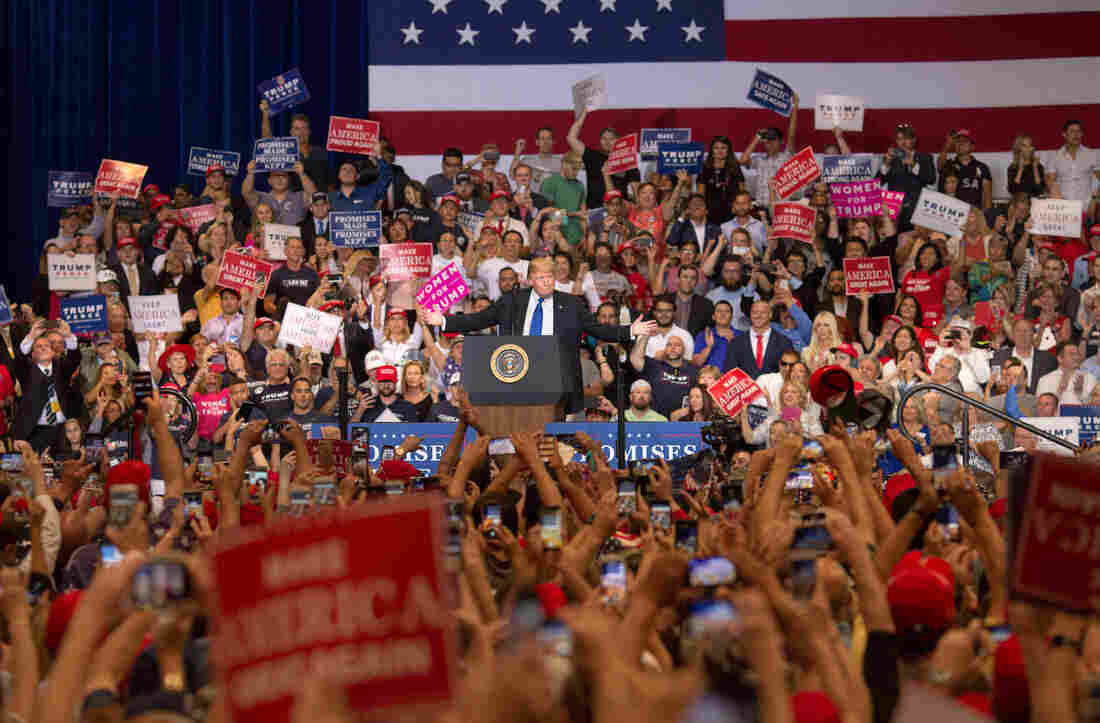 Trump urges a crowd to vote for Heller at a rally at the Las Vegas Convention Center on Sept. 20. Allison Shelley for NPR hide caption 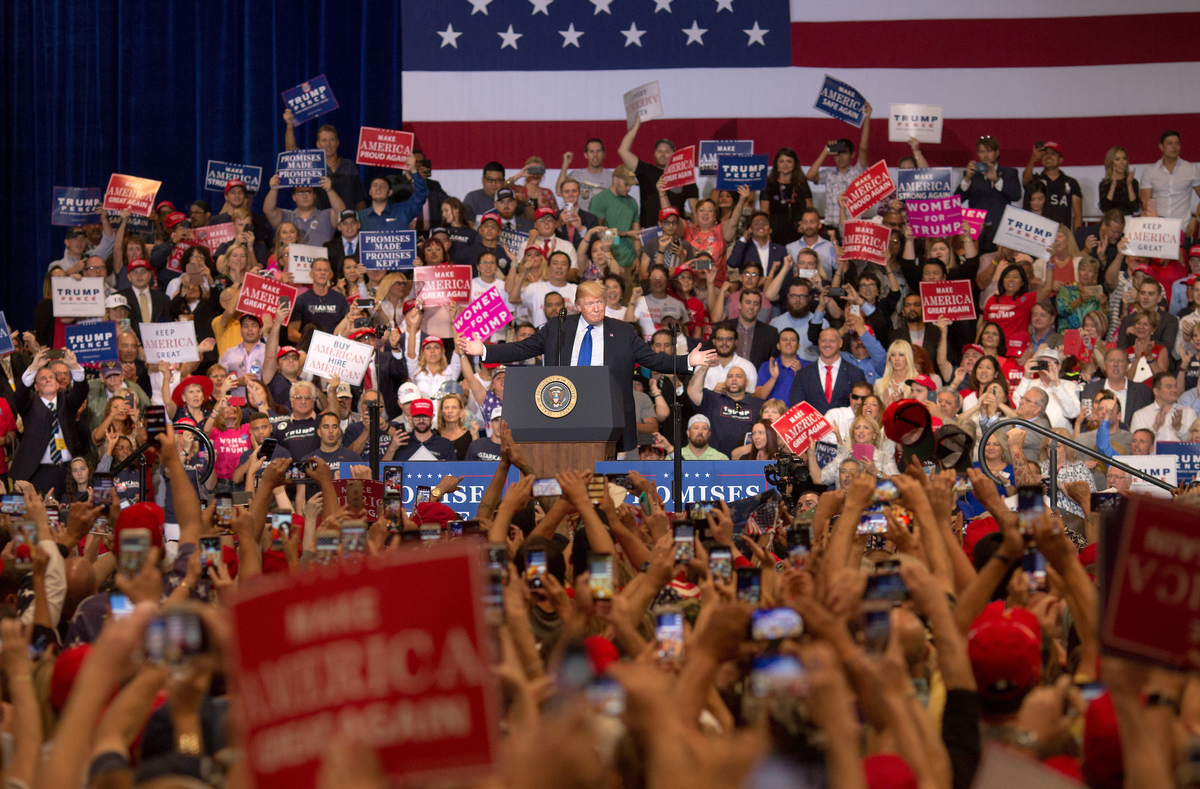 Trump urges a crowd to vote for Heller at a rally at the Las Vegas Convention Center on Sept. 20.

In the runup to 2016, Heller was a vocal critic of Trump. But now he needs his star power to turn out Republican voters, so he's all in. "Does this president know how to pack the people in one room?" Heller said after joining Trump on stage. "This is incredible. I think he just turned Nevada red today!"

Heller is on the defensive over Trump's immigration policies and his pledge to repeal the Affordable Care Act. Heller has been attacked by Democrats for his shifting positions on both issues, which polls show are important to Latinos.

Heller has voted both for and against portions of the health care law. Latinos have been a big beneficiary of the Medicaid expansion in Nevada. With immigration, Heller has condemned Trump's family separation policies but has also supported a hard-line immigration bill championed by the president that would restrict legal immigration.

But Joel Garcia, the director of Heller's Hispanic outreach initiative, "Juntos con Heller," argues that Latinos can be persuaded to vote for his candidate. He said Latinos respond to the Republican economic message and that many Latinos don't realize they already embrace conservative values. "When you actually have a conversation with them, and start talking about issues, they come out of the woodwork and they start saying, 'No, I am pro-life, I am for lower taxes, I am for less government,' " said Garcia, who also runs a small business.

Garcia refused to talk about health care policy, despite its being one of the most important issues for Hispanic voters, and abruptly shut down that portion of the conversation. It's a sign of awareness of which issues are winners for a Republican in this state and which are not.