Accessibility links
'There Will Be No Miracles Here' Is Not Your Typical Rags-To-Riches Story Casey Gerald survived a rough childhood before finding his way to success — and he's written a stunningly original memoir exposing a life much more compelling than those of many of his counterparts. 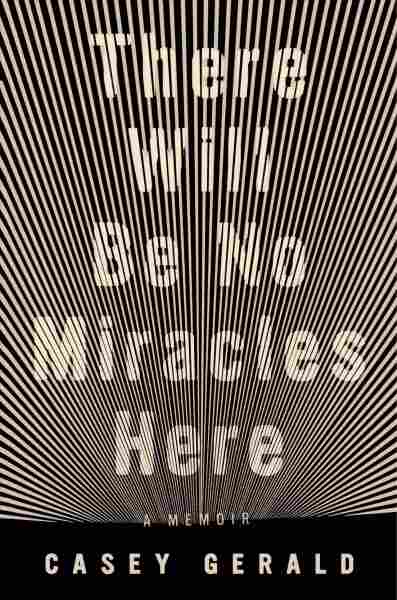 There Will Be No Miracles Here

Title
There Will Be No Miracles Here
Author
Casey Gerald

There's never a shortage of memoirs by successful businessmen and, for the most part, they tend to play out the same way.

The cover often features a photo of the author in a suit, smiling, with his arms confidently folded across his chest. The book itself tells a rags-to-riches story, broken up with obvious aphorisms and bulletted lists detailing how you, too, can earn millions if you just put your mind to it, darn it. Words like "synergy," "impact" and "disruption" all get healthy workouts.

Those are pretty much the rules of the genre — and There Will Be No Miracles Here, the debut book from MBAs Across America co-founder Casey Gerald, follows exactly none of them. It's a stunningly original literary memoir from a young man who's just as good a writer as he is an entrepreneur.

Gerald's life story is much more compelling than many of his counterparts in the business world. He grew up in Oak Cliff, an economically depressed suburb of Dallas, the son of a former college football star with substance use problems, and a mother who suffered from seizures and bipolar disorder. He went on to play football for Yale and earn his MBA at Harvard Business School. In 2016, he burst onto the national scene with a TED talk that quickly went viral.

He's certainly reached great heights, but he had to survive a difficult childhood to get there. There Will Be No Miracles Here tells Gerald's story from his childhood in Texas, when his greatest ambition was "to find was somewhere to call home and some money, U.S. dollars preferably, and, at some point, a spot on the varsity football squad and, soon after that, a beautiful boy to sneak off with on prom night."

The grandson of a pastor, Gerald grew up with a religious bent, and spent much of his youth hoping that God would deliver him from his homosexuality. At one point, the young Gerald imagines seeing angels on his bedroom wall, an appearance that he now looks at skeptically, writing, "I felt at the time that the angels were there to protect me. I wonder now whether they were trying to tear ass out of that house."

Gerald endured a family that broke in several different places. His mother disappeared when he was 12 ("If ever your mother asks you to choose between her death and disappearance, have her die. Always."), and his father was jailed for a time after his drug problems got the best of him. He lived with a series of relatives, including his older sister, and excelled in high school, both as a student and as a standout football player in a state that's crazy for the sport.

After graduation, Gerald moved north, becoming, in his estimation, "one of the most bitter reclusive boys to ever attend Yale College." While in New Haven, he co-founded the Yale Black Men's Union, a student-run organization, and played defensive back for the Bulldogs. After earning his MBA at Harvard, he went on to intern at the doomed Lehman Brothers before establishing MBAs Across America, a group that supports local entrepreneurs in towns and cities that are often overlooked by big business.

Gerald's life is uniquely impressive, but there's nothing in There Will Be No Miracles Here that remotely resembles bragging. He's resolutely unimpressed with himself, humble almost to a fault. People who have had success in business aren't usually known for their diffidence, but Gerald's book is as self-effacing as a memoir can possibly be.

And while the book isn't exactly cynical, it's refreshingly lacking in all things optimistic and inspirational. Gerald writes openly about his struggles with faith in his family and in anything divine. To be sure, Gerald does have epiphanies, but he looks at them with a healthy skepticism: "You hardly ever understand the most important things until it's too late for the understanding to do anybody any good."

There Will Be No Miracles Here is a brutally honest book, and Gerald writes heartbreakingly about his first loves and heartbreaks, as well as a family that hurt and disappointed him. "We pretended that we were not a group of people who had destroyed one another, but a family," he writes at one point. "Maybe there's no difference between the two."

Gerald's memoir is remarkable on every level: He's a natural storyteller whose writing is absolutely gorgeous. By breaking every rule of the business memoir genre, he's created something unique and sublime: a beautiful chronicle of a life as yet unfinished, and a book that refuses to give in to the glib or sentimental.

Gerald would probably roll his eyes at the phrasing, but his memoir is a shining and sincere miracle of a book.