Accessibility links
Scientists Find What Could Be A History-Making Moon Scientists have detected plenty of planets outside our solar system. Now, they say, they've found the first moon circling one of them. 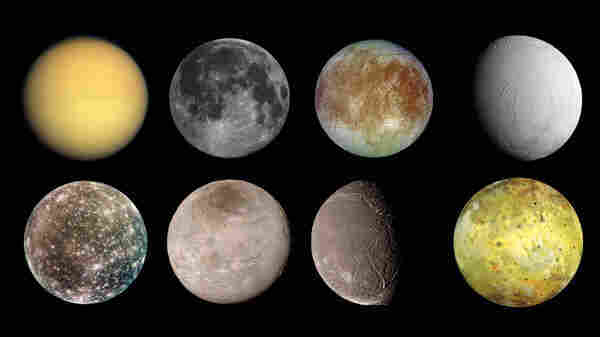 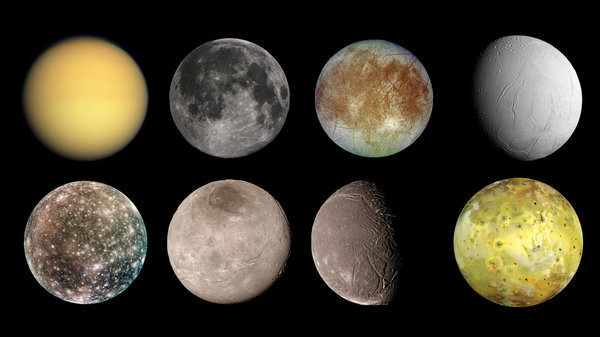 Scientists may have detected the first moon orbiting a planet in a far-off solar system, though they caution that they still want to confirm the finding with another round of telescope observations.

"The fact is, it's so strange and it's the first of its kind," says David Kipping, an astronomer at Columbia University. "That demands a higher level of rigor and skepticism than you would normally apply to a run-of-the-mill detection."

Still, he and colleague Alex Teachey say in the journal Science Advances that they have good evidence that a Neptune-size moon is orbiting a Jupiter-like planet, in a solar system about 8,000 light-years away.

That planet, called Kepler-1625b, is one of thousands that scientists have recently detected around distant stars. No one, however, has ever conclusively found an alien moon.

Kipping has spent the past decade or so working to do just that. He points out that our moon — the one with the astronaut footprints — does more than just inspire poets. Earth's companion keeps our planet's tilt stable and affects the tides. "When we look for an Earth twin, I think one of the most obvious things you might ask is, 'Does it have a moon twin,' because that seems to have a large influence," he notes.

And when E.T. phones home, there's no reason that home couldn't be a moon.

"That's been a key driver for us for a while, just trying to understand the cosmic habitats out there that we might look for, for life," says Kipping.

After all, even in our own solar system, some of the most intriguing places to search for life are moons like Enceladus and Europa, which seem to have oceans of water beneath their icy crusts.

A couple of years ago, Kipping and Teachey began scrutinizing data collected by NASA's planet-hunting Kepler space telescope. They checked about 300 planets for any weirdness that might mean a moon. What popped out was Kepler-1625b. "We didn't think we had enough to claim a discovery," says Kipping. "But we did think it was interesting enough to try to get more data on."

The researchers requested time on the Hubble Space Telescope, and their request, which was public, generated a bit of excitement among those who follow new planet discoveries.

Now the researchers say that what Hubble saw seems to confirm the idea that this planet has a moon. "We're still not 100 percent sure about that, but we think it is the leading hypothesis," says Kipping.

Hubble watched the star as the planet passed in front of it, blocking some of its light. The planet appeared to make its transit earlier than expected, suggesting that the gravity of something was tugging on it. What's more, the telescope detected an additional decrease in the star's brightness after the planet's crossing was complete, suggesting that a Neptune-size moon was in front of the star.

"The first exomoon is obviously an extraordinary claim and it requires extraordinary evidence," Teachey told reporters in a teleconference organized by the journal that published the findings. "Furthermore, the size we've calculated for this moon, about the size of Neptune, has hardly been anticipated and so that, too, is reason to be careful here."

He says they've requested more time on Hubble to do follow-up observations next May, but they are still waiting on the results of that proposal.

"If this does pan out and turn into a true discovery, it would be really revolutionary, but I don't think we're quite there yet," says Megan Bedell, an astronomer at the Flatiron Institute in New York.

Moons are kind of the next frontier when it comes to understanding alien solar systems, says Bedell: "They capture our imagination."

Planet-hunting missions like Kepler, she notes, have found plenty of gas giants orbiting stars at a cozy distance. "We think that they're at the right temperature to have liquid water on the surface, but of course there is no real surface because they are gas giant planets. So if they had terrestrial moons around them, then those would be habitable worlds," says Bedell.

If this possible moon can't be confirmed, she says new planet-finding missions mean that before too long, scientists should be in a better position to find moons — if they're out there.

Planets seem to be quite common, so it seems likely that moons should be common, too. All the planets in our solar system except Mercury and Venus have moons. "I think the real question is not whether they exist," says Kipping, "but how big do they get?"