Accessibility links
Census Bureau Nominee Offers No Opinion On Census Citizenship Question "I have no plans to voice an opinion" on the controversial 2020 census question about citizenship status, President Trump's nominee Steven Dillingham testified during his Senate confirmation hearing. 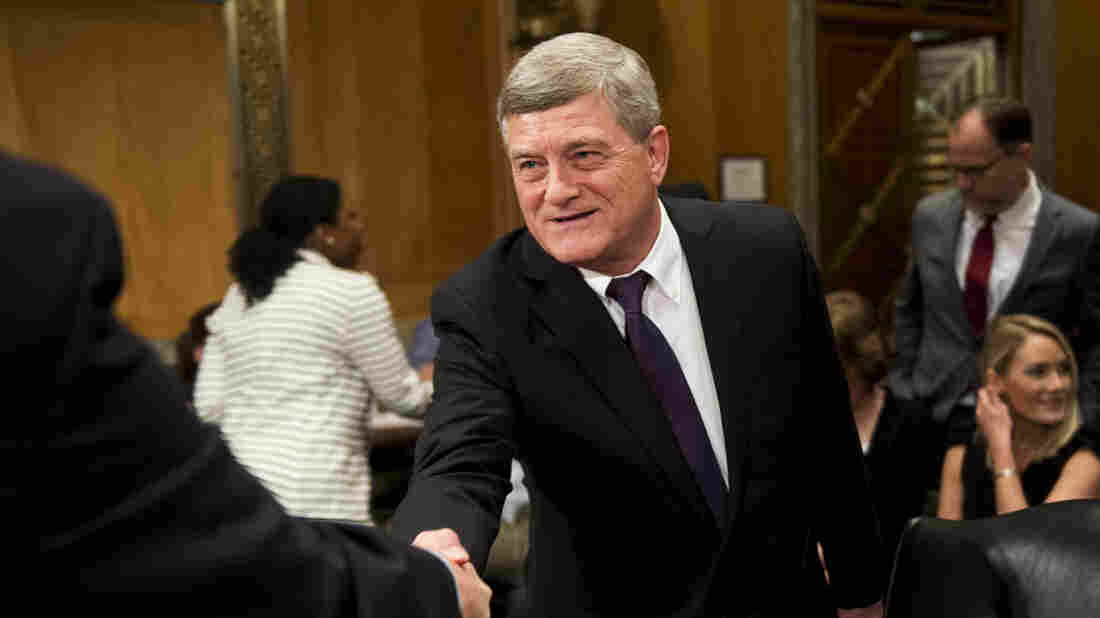 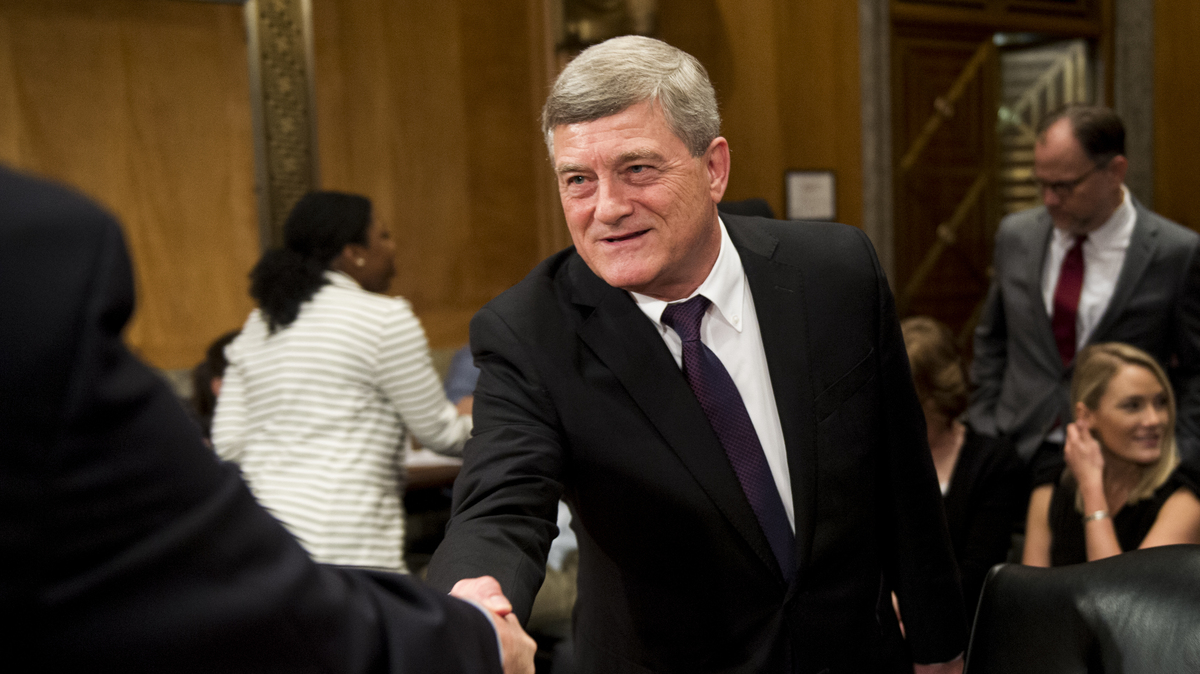 Steven Dillingham, President Trump's nominee to lead the U.S. Census Bureau, shakes hands with Sen. Ron Johnson, R-Wisc., as he prepares to testify during his confirmation hearing before the Senate Homeland Security and Governmental Affairs Committee on Wednesday in Washington, D.C.

President Trump's nominee for the Census Bureau's next director, Steven Dillingham, took one step closer to filling a key leadership post for the 2020 census that's been empty for more than a year.

Members of the Senate Homeland Security and Governmental Affairs Committee questioned Dillingham Wednesday during his confirmation hearing on Capitol Hill. It's not clear when the committee members will vote on whether to send his nomination to the full Senate for confirmation. But the committee's chair, Sen. Ron Johnson, R-Wisc., said he wants to move it along "as quickly as possible."

If confirmed for a term lasting through 2021, Dillingham would lead the federal government's largest statistical agency as it embarks on the first U.S. census to be conducted mainly online. As its director, he would also join multiple lawsuits against the Census Bureau over a newly added citizenship question that could disrupt the final months of preparation for the constitutionally-mandated head count of every person living in the country.

In the meantime, without permanent leadership, the bureau has been ramping up preparations for the 2020 census, set to kick off in rural Alaska in January of that year. After John Thompson stepped down in an earlier-than-expected retirement last June, the bureau has been led by Acting Director Ron Jarmin, a career staffer who previously led the Census Bureau's economic programs.

"No plans to voice an opinion"

While the senators' questions touched on reducing the cost of the census, cybersecurity risks, and the challenge of hiring enough census workers, a topic lawmakers returned to repeatedly during Wednesday's hearing was the hotly contested citizenship question.

Dillingham avoided taking a position on the question that asks, "Is this person a citizen of the United States?"

Asked by Sen. Steve Daines, R-Mont., if he supports including the citizenship question on the census, Dillingham replied: "I have no plans to voice an opinion on that question. I think it would not be advisable in my position if I'm confirmed to be the director of the Census Bureau."

The courts, he added, will decide whether or not the bureau will continue its plans to include the question on forms for the upcoming national head count.

"It will be my responsibility, if confirmed, to administer the decennial census in accordance and consistent with that judicial decision," Dillingham testified.

As the next Census Bureau director, Dillingham would step into six lawsuits over Commerce Secretary Wilbur Ross' decision to add the controversial question about U.S. citizenship status to the 2020 census. Ross has said he approved adding the question because the Justice Department needs the responses to better enforce the Voting Rights Act's protections for racial and language minorities against discrimination.

The Census Bureau's chief scientist and other researchers, however, urged Ross to rely instead on existing government records about citizenship status to meet the Justice Department's needs. They also warned Ross that using the census to ask about citizenship status could discourage households with noncitizens, including immigrants living in the U.S. illegally, from participating in the head count.

That, in turn, could harm the accuracy of the information collected from the census. The population count is used to determine how many congressional seats and Electoral College votes each state receives after the census, not to mention its portion of an estimated $800 billion a year in federal funding for schools, roads and other public institutions and services.

Shortly after the White House announced Dillingham as the nominee in July, Rep. Carolyn Maloney, D-N.Y., who serves on the House Committee on Oversight and Government Reform, expressed concerns about his past experience as an adviser to the American Legislative Exchange Council, or ALEC, a conservative group that tries to shape state laws.

"Dr. Dillingham needs to reject the [Trump administration's] attempt to add a citizenship question," Maloney said in a written statement. "If he does not, I believe the Senate should reject his nomination."

While he did not speak out against the question during Wednesday's hearing, Dillingham did acknowledge that the Census Bureau's "best and brightest ... identified the possibility that there could be changes" in people's responses to the census because of the newly added citizenship question.

Replying to concerns about a "chilling effect" raised by Sen. Maggie Hassan, D-N.H., Dillingham noted the bureau's plans to follow up with households that don't respond to the census immediately on their own. He also emphasized the need to counter any negative perceptions about any of the 2020 census questions with the bureau's planned advertising campaign.

Sen. Kamala Harris, D-C.A., pushed Dillingham on whether he was concerned that the bureau has not conducted testing on a questionnaire for the 2020 census that includes the citizenship question.

After expressing concern about the impact of all the 2020 census questions, he ultimately replied, "If confirmed, I would certainly confer with the experts at the Census Bureau ... and determine their best views on that topic."

Dillingham, who has a Ph.D in political science from the University of South Carolina, has been nominated for the bureau's top job without any prior experience working at the agency. But he did lead smaller federal statistical agencies during both Bush administrations, with stints at the Bureau of Justice Statistics and the Bureau of Transportation Statistics, which he left during the Obama administration. Under President Trump, he has led the Peace Corps Office of Strategic Information, Research, and Planning.

Katherine Wallman, a former chief statistician at the White House's Office of Management and Budget, worked with Dillingham during his time at the Bureau of Transportation Statistics. She says his past service as a political appointee in prior administrations who reported to policy officials could help him as the head of the Census Bureau, which is overseen by the Commerce Department.

"I think that's very valuable experience to know how to work in that environment," Wallman says.