Accessibility links
Smart, Unsentimental 'Heartland' Pays Tribute To America's Working Class Sarah Smarsh grew up as a member of the white working class in rural Kansas. In a new memoir, she examines the crushing ways in which class shapes possibility in the U.S. 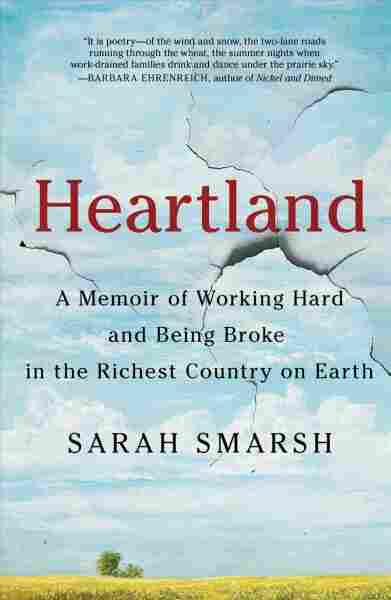 During the 1980s, when Smarsh was growing up, family farms were going under in record numbers, falling victim to foreclosure and the rise of giant agribusiness. By then, Smarsh's dad was taking any job he could get, including roofing, driving semitrucks and disposing of poisonous industrial solvents — a job that almost killed him.

As a family, the Smarshes were just hanging on, living below the poverty line. But like many others in their situation, they considered themselves middle class. Looking back in wonderment, Smarsh writes:

That we could live on a patch of Kansas dirt with a tub of Crisco lard and a $1 rebate coupon in an envelope on the kitchen counter and call ourselves middle class was at once a triumph of contentedness and a sad comment on our country's lack of awareness about its own economic structure. Class didn't exist in a democracy like ours, as far as most Americans were concerned, at least not as a destiny or an excuse. You got what you worked for, we believed. There was some truth to that. But it was not the whole truth.

Smarsh's new memoir is called Heartland and it tries to tell more of that "whole truth." As you can hear in Smarsh's voice, her book is smart, nuanced and atmospheric.

Though Smarsh is now a journalist with a graduate degree, she hasn't written the predictable "up by my own bootstraps" saga of individual perseverance and class ascent. Quite the contrary. Smarsh spent 15 years researching her memoir and her lens is unusually wide and deep.

She Thought Her Family Was Middle Class, Not Broke In The Richest Country On Earth

For instance, when she describes that incident of her dad's on-the-job chemical poisoning, she also connects it to a larger story about how the rise of the nation's for-profit hospital system in the 1980s made regular medical care too costly for uninsured families like hers.

Thinking about her dad — as well as her relatives with missing teeth, swelling feet, mental illness and addictions — Smarsh says, "It's a hell of a thing ... to grow the food, serve the drinks, hammer the houses, and assemble the airplanes that bodies with more money eat and drink and occupy and board, while your own body can't go to the doctor."

With the same lyrical boldness, Smarsh talks about politics and race. She has no hesitation acknowledging white privilege, but she also notes the puzzlement, shot through with disdain, that she encountered once she got to college and began describing her farm childhood in Kansas.

Smarsh says folks of all backgrounds would say to her that they "had[n't]" heard anything like [her story] since The Grapes of Wrath." It's hard not to internalize that kind of contempt.

It was no surprise, then, that when Smarsh was admitted to the University of Kansas on a federally funded program for minority, first-generation, and low-income students, the small handful of white kids already in the program had given themselves the nickname "White Trash Scholars."

Heartland deepens our understanding of the crushing ways in which class shapes possibility in this country. It's an unsentimental tribute to the working-class people Smarsh knows — the farmers, office clerks, trash collectors, waitresses — whose labor is often invisible or disdained.

It's also a tribute to the Kansas that Smarsh still feels connected to, a place of beer parties amid "fragrant rolls of wet hay" and tractors pulling sleds full of kids through the flat, snowy fields.

Trying to capture the good, the bad, and the ugly of her white, working-class childhood in this memoir, Smarsh reflects: "We can't really know what made us who we are. We can come to understand, though, what the world says we are." In Heartland, Smarsh powerfully talks back to a world that mostly told her and her family they were disposable.

Read an excerpt of Heartland