Accessibility links
Nobel Prize In Chemistry Honors Work That Demonstrates 'The Power Of Evolution' An American woman, Frances H. Arnold, has won half of the 2018 Nobel Prize in chemistry, and George Smith of the U.S. and Sir Gregory Winter of the U.K. will share the other half.

Gregory Winter (left), of the MRC molecular biology lab in Cambridge, England; Frances Arnold (center), of the California Institute of Technology; and George Smith (right), of the University of Missouri, won the 2018 Nobel Prize in chemistry. AP hide caption

American Frances H. Arnold has won half of the 2018 Nobel Prize in chemistry for her work in changing how chemists produce new enzymes, sharing the prize with another American, George Smith, and Sir Gregory Winter of the U.K. for research that has led to new pharmaceuticals and cancer treatments.

"This year's prize is about harnessing the power of evolution," the Royal Swedish Academy of Sciences said in announcing the winners. This year's laureates have "re-created the process in their test tubes ... and make evolution many times faster."

Arnold is only the fifth woman to win the prize in its 117-year history. She conducted the first directed evolution of enzymes, which are proteins that catalyze chemical reactions. Enzymes produced through "directed evolution" in laboratory settings are used to manufacture everything from renewable fuels to pharmaceuticals. 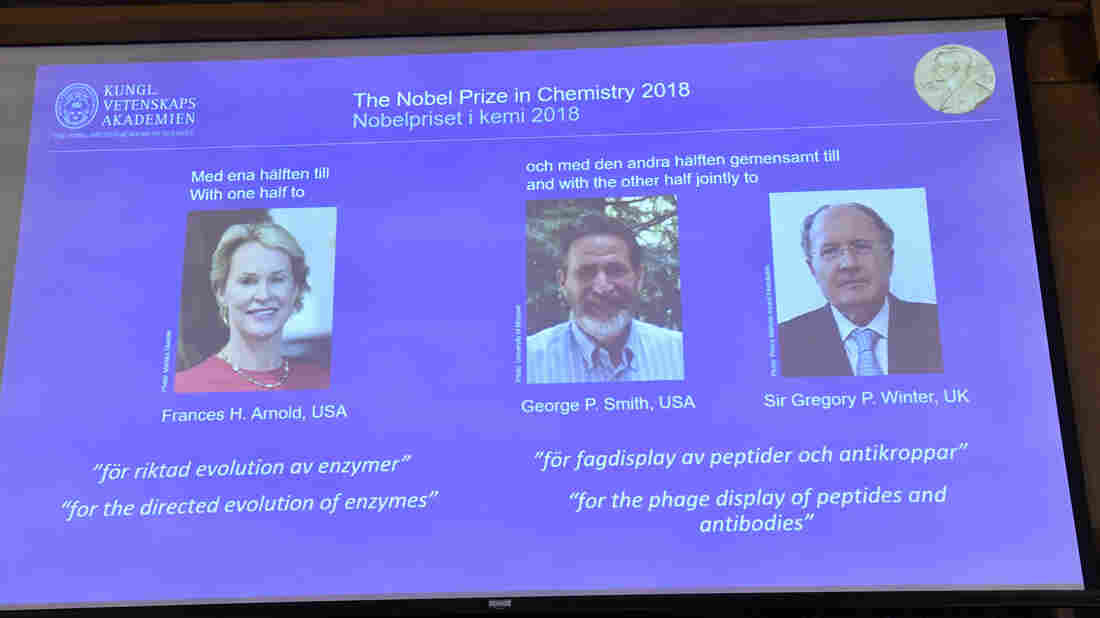 A screen displays portraits of Frances Arnold of the United States, George Smith of the United States and Gregory Winter of the U.K. during the announcement of the winners of the 2018 Nobel Prize in chemistry at the Royal Swedish Academy of Sciences on Wednesday. Jonas Ekstromer/AFP/Getty Images hide caption 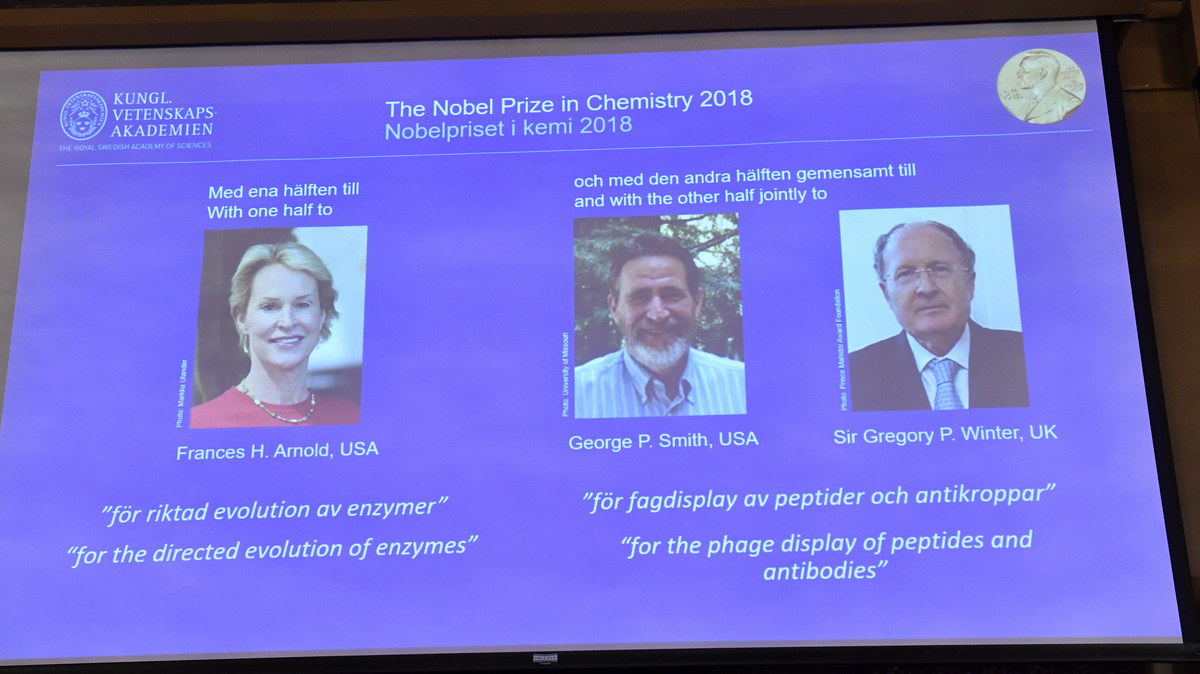 A screen displays portraits of Frances Arnold of the United States, George Smith of the United States and Gregory Winter of the U.K. during the announcement of the winners of the 2018 Nobel Prize in chemistry at the Royal Swedish Academy of Sciences on Wednesday.

She was asleep in a hotel room in Texas when the phone rang.

"And at first, of course, I thought it was one of my sons, with a problem," says Arnold. "But then it was a wonderful feeling. They told me that I had won the Nobel Prize!"

She says it's hard not to dream of the Nobel, but she didn't think it was really a possibility, noting, "I'm an engineer by training."

Arnold, born in 1956 in Pittsburgh, studied engineering at Princeton University only a few years after the college began admitting women.

"I wanted to rewrite the code of life, to make new molecular machines that would solve human problems," she told NPR in 2014.

"I'm sure that there are people who are skeptical that a woman can do this job as well as a man," Arnold continued, adding, "I am blissfully unaware of such people — and have been gifted with the ability to ignore them completely."

NPR detailed Arnold's work in 2012 after she spoke at a TEDMED conference.

"In the lab, she's speeding up [evolution] by shuffling genes artificially — and doing it smartly she hopes — by figuring out which elements have a fighting chance of producing proteins that actually work and maybe even do something useful," wrote NPR's Scott Hensley.

Arnold likened the duties of these molecules to sex. "Proteins aren't designed, they're evolved. ... Sex is an innovation-generation machine," she said.

Arnold received her Ph.D. from the University of California, Berkeley. She is the Linus Pauling professor of chemical engineering, bioengineering and biochemistry at the California Institute of Technology.

Sharing in the other half of this year's prize is Smith, who developed a method known as phage display, where a bacteriophage – a virus that infects bacteria – can be used to evolve new proteins.

Born in Norwalk, Conn., in 1941, Smith received his Ph.D. from Harvard University and is the curators' distinguished professor emeritus of biological sciences at the University of Missouri, Columbia.

The third laureate, Winter, was born 1951 in Leicester, U.K. He received his Ph.D. from the University of Cambridge and is the research leader emeritus at the MRC Laboratory of Molecular Biology in Cambridge.

Winter has used phage display to produce new pharmaceuticals. The methods he has developed have produced antibodies that can neutralize toxins, counteract autoimmune diseases and cure metastatic cancer.

"We are in the early days of directed evolution's revolution which, in many different ways, is bringing and will bring the greatest benefit to humankind," said the academy.

The 2017 Nobel Prize in chemistry was awarded to researchers Jacques Dubochet, Joachim Frank and Richard Henderson for their work in cryo-electron microscopy, which the academy said "both simplifies and improves the imaging of biomolecules."

The three recipients announced Wednesday bring to 181 laureates the number who have won the chemistry prize since its inception in 1901. Only five women, including Arnold, have ever won.

"Chemistry is filled with brilliant women, so I think we'll see a steady stream of Nobel prizes awarded to women," says Arnold.