Accessibility links
FBI Report about Kavanaugh allegations expected to reach Senate early Thursday Only one copy of the supplemental investigation into Supreme Court nominee Brett Kavanaugh will be available to senators and their aides, who will read it in shifts in a secure room at the Capitol. 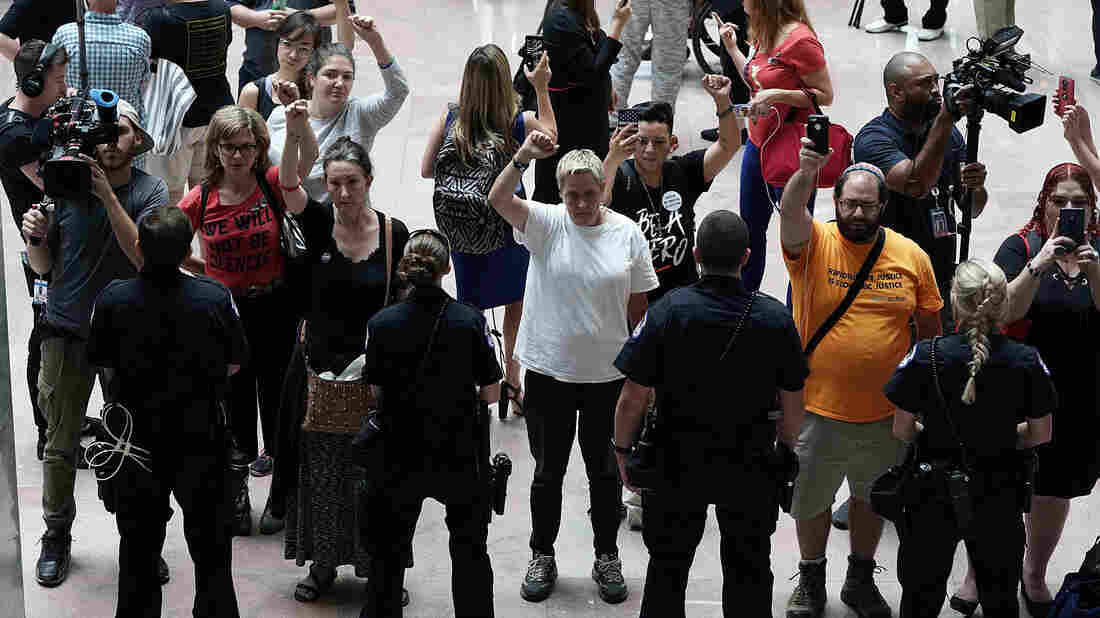 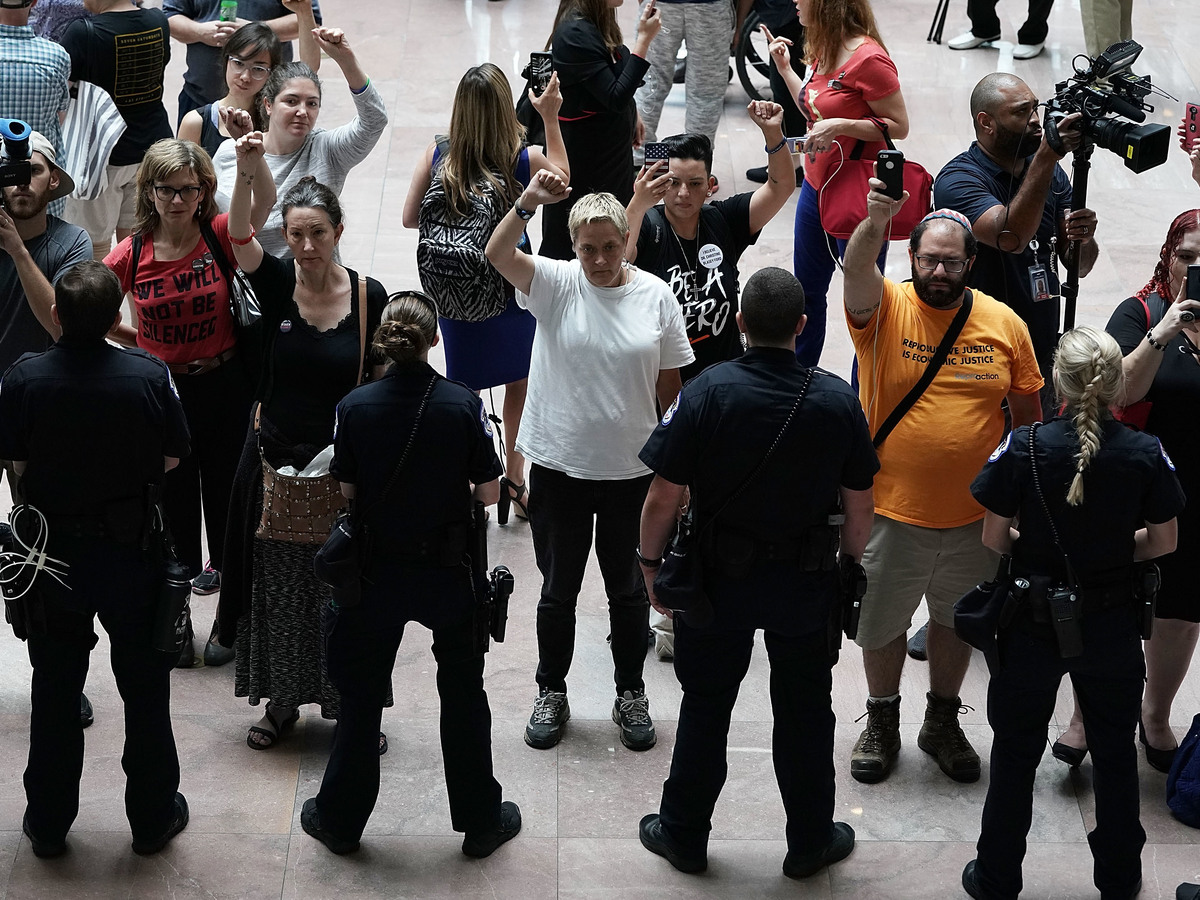 Activists chant during a protest outside the office of Senate Judiciary Committee Chairman Chuck Grassley of Iowa.

The FBI's highly anticipated supplemental background check on Brett Kavanaugh was sent to the White House and Capitol Hill overnight, with senators set to review the report on Thursday in the final chapter of what has become a deeply acrimonious confirmation battle.

Senate Majority Leader Mitch McConnell, R-Ky., announced the planned arrival of the report on Wednesday night and said all senators would get a chance to review it ahead of the next procedural milestones in the chamber.

Only one copy is being made available to senators and their aides.

Senators – and a limited number of Republican and Democratic staff members with the requisite security clearances — will be allowed to read the report in a secure room at the Capitol in alternating one-hour shifts, according to congressional sources.

The schedule is expected to start with GOP staff slated for the first period between 8 – 9 a.m on Thursday, then Democrats from 9 – 10 a.m.

Senators may be able to discuss what's in the document but it isn't clear whether a copy of the full report, or a redacted version, might become public, or if so, when.

Meanwhile, McConnell said he has started the clock running toward the finale of the Kavanaugh saga.

The Senate could vote to end debate on the nomination in the early hours of Friday morning. If senators vote to close the debate, that would start another clock ticking toward a final vote on whether to put Kavanaugh onto the Supreme Court.

Shortly after 1 a.m. ET Thursday, spokesman Raj Shah announced that the White House had received the FBI's supplemental background check and urged the Senate to act. The report was ordered by the president at the request of the Senate.

Senate Judiciary Committee chairman Chuck Grassley, R-Iowa, announced that the report had been received by the committee just after 3 a.m. ET, defending the process to vet Kavanaugh.

The margin of support within the bitterly divided Senate is understood to be close. Republicans need every vote they can get to install Kavanaugh, which is why the stakes are so high for whatever is contained in the FBI report.

Another political battle on Thursday may take place even before any procedural action. According to the latest indications on Wednesday evening, the FBI had not interviewed two of the key players in the Kavanaugh saga: the nominee himself or his first accuser, Christine Blasey Ford.

Ford's attorney said on Wednesday afternoon that she still wished to talk with FBI investigators but hadn't, and told Grassley that Ford had supplemental documents to give the FBI.

Democrats are expected to cry foul about an investigation that omits Ford and Kavanaugh; Republicans may take the position that they've already talked extensively with the Senate and the public in their open hearing last week.

Republicans also accuse Democrats of trying anything to damage Kavanaugh and delay his confirmation.

"Five days of public hearings. Sixty-five private meetings with Senators. More than 1,200 responses to written questions from members," McConnell said. "More than 500,000 pages of documents for review — the most produced for any Supreme Court nomination in history. And the 300-plus opinions Judge Kavanaugh has issued during his 12 years on the D.C. Circuit."

Now, the majority leader said, it is time for the Senate to move forward.

The FBI report was due to senators following a day on which President Trump added fresh animosity to the already tense debate over Kavanaugh with new comments that mocked the sexual misconduct allegations against his Supreme Court nominee.

Trump risked alienating key undecided senators when he derided the testimony given by Ford, the woman who has accused Kavanaugh of sexually assaulting her in the 1980s at a high school party.

At a rally in Mississippi Tuesday evening, Trump complained about the impact the allegations have had on Kavanaugh and his family and the delay some in his own party pressed for to further investigate the claims.

The president also poked fun at Ford's recollection of details about the episode, including how much she drank and where the party was located.

"The president's comments were just plain wrong," she said.

"There is no time and no place for remarks like that, but to discuss something this sensitive at a political rally is just not right," Flake said on NBC's Today show. "I wish he hadn't done it and I just say it's kind of appalling."

Pressed on whether they would impact her vote on Kavanaugh's nomination, Murkowski repeated her admonishment to the president, saying, "I am taking everything into account. I think the president's comments [Tuesday] mocking Dr. Ford were wholly inappropriate, and in my view unacceptable."

Trump's comments come at a time of intense political division in Washington. The Senate has descended into direct partisan attacks and personal animus as the country grapples with serious questions about how to handle allegations of sexual assault.

Some lawmakers say they worry the political fight over Kavanaugh's nomination is melding with the broader #MeToo movement in a way that could politicize the discussion of assault in general.

Retiring Sen. Bob Corker, R-Tenn., is among those who say the Senate's handling of the allegations against Kavanaugh has created an impression that the issue of sexual assault is itself political.

"I know a lot about sexual assault and so the thought that we don't care about that is ridiculous," Corker said. "But that's how it's being portrayed and it's a shame. And actually I'm going to say just generally speaking this aggressive effort that's underway is actually hurting the effort."

It's not uncommon for partisan battles to intensify this close to a midterm election, but many senators from both parties say the anger over Kavanaugh is approaching a new peak. Vermont Democrat Patrick Leahy, the longest-serving current senator, said the mood in the Capitol is among the worst he has seen.

"I've been here a long time — under both Republican, Democratic leadership," Leahy said. "I've never seen anything like this. I think it diminishes the Senate. We're supposed to be conscience of the nation. We're not acting like that."

Leahy, one of the most senior Democrats on the Senate Judiciary Committee, says he worries the fight will have a lasting impact on both the Senate and the courts.

"It also diminishes the United States Supreme Court," Leahy said. "It makes it look like a political arm of the White House."

He predicted the Supreme Court nomination process would be forever changed — there would be a "before" Kavanaugh and an "after" Kavanaugh for those seeking federal office or a judicial appointment.

Republican Sen. Lindsey Graham Lashes Out At Democrats Over Kavanaugh

Republican Sen. Lindsey Graham Lashes Out At Democrats Over Kavanaugh

"I'm telling all of my colleagues that this is the most despicable thing I've seen since I've been up here," Graham said. "Woe be unto those who run for office in the future or want to be a judge. There's a lot at stake here."

Graham was one of three senators who had their personal information, including cell and home phone numbers and addresses, posted on Wikipedia and recirculated on Twitter. He and other Senate Republicans now travel the halls of the Capitol with a police detail out of fears of violence.

The fight over Kavanaugh has also sparked passionate debate with voters across the country. Protesters are flooding the halls of Capitol Hill to confront lawmakers, showing up in restaurants where senators are dining and waiting for their planes to land at Washington's airport.

Senate Majority Leader Mitch McConnell, R-Ky., was one of those people met by protesters at the airport on Monday. On Wednesday, he shot back in a speech on the Senate floor about what he called harassment: "We will not be intimidated by these people."

He added, "It's time to put this embarrassing spectacle behind us." And as he has all week, McConnell reiterated his timeline for moving forward: "The Senate will vote on this nomination this week."

The protesters are credited with helping influence Flake's decision to call for the supplemental FBI investigation that is currently underway. Ana Maria Archila and Maria Gallagher, two activists opposed to Kavanaugh, approached Flake in an elevator last week, just after he announced that he intended to vote for him.

The two asked him to look them in their eyes and they said voting for Kavanaugh "is allowing someone who actually violated a woman to sit on the Supreme Court. This is not tolerable. You have children in your family. Think about them."

Soon after, Flake joined Sen. Chris Coons, D-Del., in asking for the additional FBI interviews. Flake has given conflicting reports as to how much that conversation influenced his thinking, but many credit the two women for prompting the Arizona Republican to have second thoughts about proceeding to a full Senate vote.

Some senators say all is not lost. Retiring Sen. Orrin Hatch, R-Utah, was one of several senators who described the Senate as a place that moves on — because it has things to do.

"We've always recovered. We always have enough really sincere, decent, honorable people to make these things work," Hatch said. "And we have plenty of those right now."