Accessibility links
National Coming Out Day : It's Been a Minute with Sam Sanders To mark National Coming Out Day on Oct. 11, Sam examines the history, meaning and future of coming out with University of Nevada, Las Vegas professor Marcia Gallo and E. Patrick Johnson of Northwestern University. He also shares coming out stories from listeners and swaps stories with NPR film critic Bob Mondello. Tweet @NPRItsBeenaMin with feels or email samsanders@npr.org.

42:16
It Almost Destroyed Ellen's Career; Now Celebrities Are Playing With 'Coming Out' 42:16 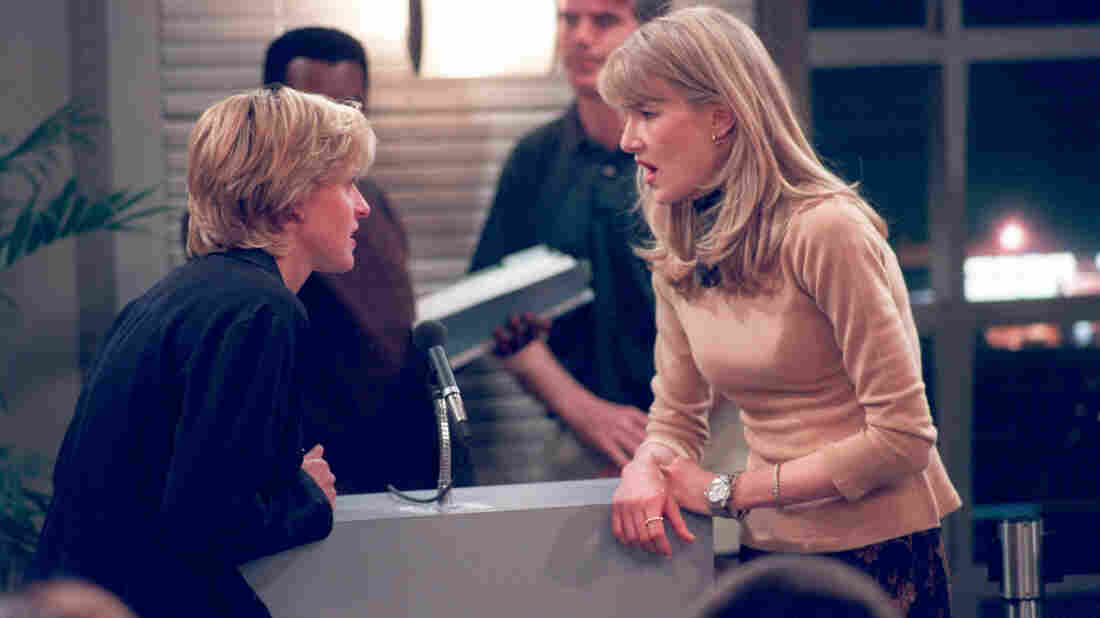 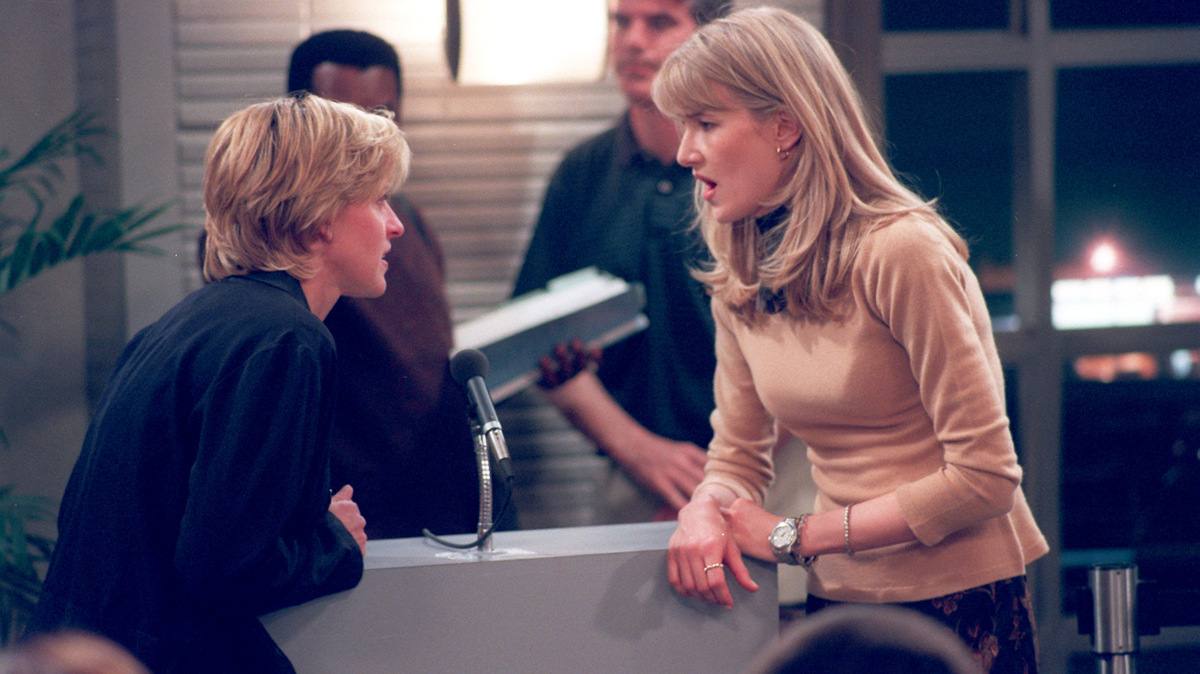 Oct. 11 marks the 30th anniversary of National Coming Out Day. The day celebrates "coming out" as a central piece in the demand for equality by the LGBT rights movement as well as a formative experience in the lives of many LGBT people.

Since the first National Coming Out Day in 1988, a lot has changed. Coming out doesn't carry the same political significance that it used to, and the ways in which people choose, or don't choose, to come out have reflected that shift.

Those changes are most evident in pop culture — movies, TV, and music — and LGBT celebrities have done a lot to influence how the general public thinks about coming out. In 1997, almost a decade after the first National Coming Out Day, Ellen DeGeneres came out on the cover of Time, and the character that she played on her sitcom, Ellen, came out as well.

It was a big deal, and it mobilized a political backlash. DeGeneres received death threats. Some advertisers decided to pull their ads from the show. An adult content warning was added to episodes in which two women kissed. The show took heat from conservative commentators who griped that the show was trying to normalize homosexuality. The show was canceled a little more than a year afterward. Later, DeGeneres joked that the episode title was "The Puppy Episode" because " 'Ellen throws her career away' seemed too on the nose." On The Oprah Winfrey Show, she reflected, "It was hard. I lost everything."

At the same time, people looking back on that moment see it as a pivotal shift. As she celebrated the 20th anniversary of "The Puppy Episode" on her talk show, DeGeneres said it was important "to remember what it was like back then and appreciate how far we've come."

"We owe her a lot," says Dr. Marcia Gallo, history professor at the University of Nevada, Las Vegas. That episode paved the way for shows like Will and Grace, Glee, and Modern Family.

Before DeGeneres came out, speculation about her sexuality had been growing. Rather than let speculation remain speculation, like a true comic she teased the audience with acts on her show like literally coming out of the closet, until she finally came out for real. In the same vein, celebrities have faced speculative media coverage about their sexuality and gender identity and have reacted in different ways. Some chose to put an end to the gossip by just coming out.

In 2006, the actor Neil Patrick Harris issued a statement saying "I am happy to dispel any rumours or misconceptions and am quite proud to say that I am a very content gay man living my life to the fullest and feel most fortunate to be working with wonderful people in the business I love."

The actress Ellen Page came out in 2014 in a speech at a conference for LGBT Youth. The "Juno" star told the audience "I am tired of hiding and I am tired of lying by omission. I suffered for years because I was scared to be out. My spirit suffered, my mental health suffered and my relationships suffered. And I'm standing here today, with all of you, on the other side of all that pain." Page's declaration felt momentous, and it reflected what many celebrities felt like they were doing, "lying by omission."

Kardashian parent and reality TV star Caitlyn Jenner announced her transition on the cover of Vanity Fair in 2015.

In all of these cases, media have focused on coming out as a revelation. A magazine cover. A statement. A speech. Something that warrants a headline or a photo shoot.

But other celebrities are playing "hard to pin down" when it comes to their sexuality or gender identity. They tease. And this ambiguity reflects a change in the political climate. Although a lot of LGBT people continue to face sometimes life-threatening danger if they come out, coming out no longer poses the same threat to a celebrity's career.

Ellen said it herself. In that episode of her talk show celebrating 20 years since her coming out, DeGeneres opened the show by saying "I'm Ellen, and I'm gay. 20 years ago, I said that; it was a much bigger deal then."

Before making any formal announcement, funk and hip-hop singer Janelle Monáe kept it ambiguous. She wore tuxedos. A 2013 article from The Guardian says "she is a lesbian icon, but when asked about love in the past she has replied that she only dates androids." She released her music video "Pynk" that had some overtly queer themes, and then told Rolling Stone that she was pansexual, which prompted The Mercury News to write the headline "Janelle Monáe comes out as 'pansexual' — but what does that mean?" Instead of a distinct coming out moment, the whole deal felt like a slow rollout. The media tried to wrestle her into one label and one moment. By letting her sexuality slide into public view, she was able to slip out of the public grasp.

In 2012 R&B singer Frank Ocean wrote about his first love, who was a man, on his personal webpage. (To which the public reacted with Yay! Wait, Is Frank Ocean gay? Bisexual?) He has never used a label for himself or done any interviews in which he commented on his sexuality.

Jaden Smith drew attention when he started wearing dresses and was part of Louis Vuitton's womenswear campaign. He's been called a nonbinary icon without ever declaring himself as nonbinary. He told GQ " I've never seen any distinction. I don't see man clothes and woman clothes," but one can't really call that a "coming out" moment.

All of these examples of non-coming outs reflect a shift in the climate, where defining a fixed sexual orientation and gender identity doesn't matter as much. "In the moment we're in now, it's not about limiting oneself to an identity as much as announcing a breaking down of a binary," says E. Patrick Johnson, chair of the Department of African American Studies at Northwestern University. It's hard to declare that there is no need to come out anymore, but the choice by these celebrities to tease and shrug it off suggests a future where it won't.