Accessibility links
'All You Can Ever Know' Offers A Personal Account Of Transracial Adoption Nicole Chung's memoir is never myopic and, ultimately, it's universal: a story about families, learning to grapple with our own identities, and figuring out where we belong. 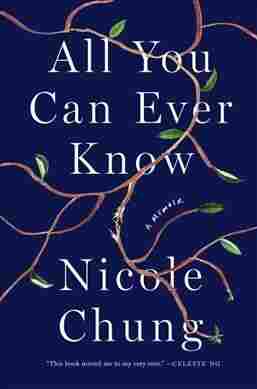 All You Can Ever Know

Title
All You Can Ever Know
Author
Nicole Chung

The story Nicole Chung was told about her adoption was always the same: "Your birth parents had just moved here from Korea. They thought they wouldn't be able to give you the life you deserved."

Her adoptive parents were white Catholics living in Oregon who told the story with joy: explaining that Chung was born 10 weeks premature, that her birth parents worried she would struggle all her life, that they believed adoption was the best thing for her.

As a child, Chung, the editor-in-chief of Catapult and a founding member of The Toast, accepted this story much in the same way all of us accept the narratives presented to us about the lives our families had before us. Chung writes that the story was a "kind of faith, one to rival any religion, informing our beliefs about ourselves and our families and our place in the world." Though she liked the prepackaged myth of her birth parents as selfless, wanting only the best for their daughter, as she became older Chung started to wonder if the story was the entire truth.

When she was pregnant with her first daughter, and facing impending parenthood, Chung realized that she wanted to learn more.

In her memoir, All You Can Ever Know, Chung writes with an empathy that is careful to consider the perspectives of everyone involved in her adoption story: herself, her adoptive parents and her birth family. Early in the book she writes a chapter entirely in the third person, told from the perspective of one of her birth sisters, Cindy. She continues to tell the story of her birth family in this way, detailing what their life looked like before and after the adoption. The detail is useful for the reader to understand that Chung's search will ultimately be successful, but the book is still paced like a mystery: the how and the when and the why of Chung's reunion are what drive the tale.

Woven through the book is Chung's personal experience of her adoption: the racism that she faced as a child in a predominantly white town, the feeling of not quite belonging, the love she feels for her adoptive parents, and the way she found herself through writing. Early in the book she recounts a story of being newly out of college and meeting a couple who are hoping to adopt a child from another country. They ask Chung if she "minded" her adoption, and it's this question — and Chung's inability to answer it quickly or easily — that frames much of the book.

"The truth was that being Korean and being adopted were things I had loved and hated in equal measure," Chung explains. "Sometimes the adoption ... upset me more, sometimes my differences did, but mostly it was both at once, race and adoption, linked parts of my identity that set me apart from everyone else in my orbit." Chung's writing is never overtly sentimental, but it's crisp and clear and evocative. When she writes about the racism she faced as a child in her predominantly white town, she makes sure to include her confusion as well as the difficulty she has explaining this to her white parents, who loved her absolutely.

On her first visit to an Asian grocery store in Seattle with her family, she writes, "It was bursting with strange, wonderful smells, crammed with boxes and barrels of vegetables and fruits, tanks of live fish and still more seafood and meat on ice."

Chung also methodically details the bureaucratic process to find her birth family: the letters she writes, finding an intermediary, the legal aspects of closed adoptions. And even though there's a sense of banality, her writing manages to keep the entire section feeling urgent and necessary. Chung manages to make every moment she spent second-guessing her decision to search feel newly relevant.

When she's pregnant with her first child, she finally reaches out — and the latter half of the book details what she learned about her family: much of which upends the legend she has always heard. Though Chung has been complicating most traditional, prepackaged adoption narratives throughout the book, it's when she is faced with the differences in her own story that the lesson reveals itself to the reader — who begins to see just how varied adoption stories can be.

Chung's reunion with her sister Cindy is told in expansive, detailed scenes that bring Chung's adult emotions to life in sharp focus: "Fat raindrops dotted my red sweater, mingled with the moisture on my face," Chung writes about that moment. Her evolving relationship with her sister gives the book an additional emotional heart.

All You Can Ever Know also feels informed by Chung's own experience as a mother: Early in the book she writes with an almost prescient wisdom that "no matter how a child joins your family, their presence changes all the rules; they move into your heart and build new rooms, knock down walls you never knew existed."

It's this kind of warmth and understanding that she applies to everyone in her own life. Though the story is intensely personal, it's never myopic and, ultimately, it's universal: a story about learning to grapple with our own identities, about learning where we belong, and about families.

Read an excerpt of All You Can Ever Know

Mariya Karimjee is a freelance writer whose work has appeared on This American Life, LitHub and BuzzFeed. Her forthcoming memoir will be published by Spiegel & Grau.